If you asked a cigar smoker what the unofficial attire was for somebody who smokes cigars, you’ll more than likely get one of two answers: a guayabera or a Tommy Bahama button up shirt. While the guayabera is a style of shirt with origins dating back to some time around the early 1800s, Tommy Bahama has a slightly more recent history. 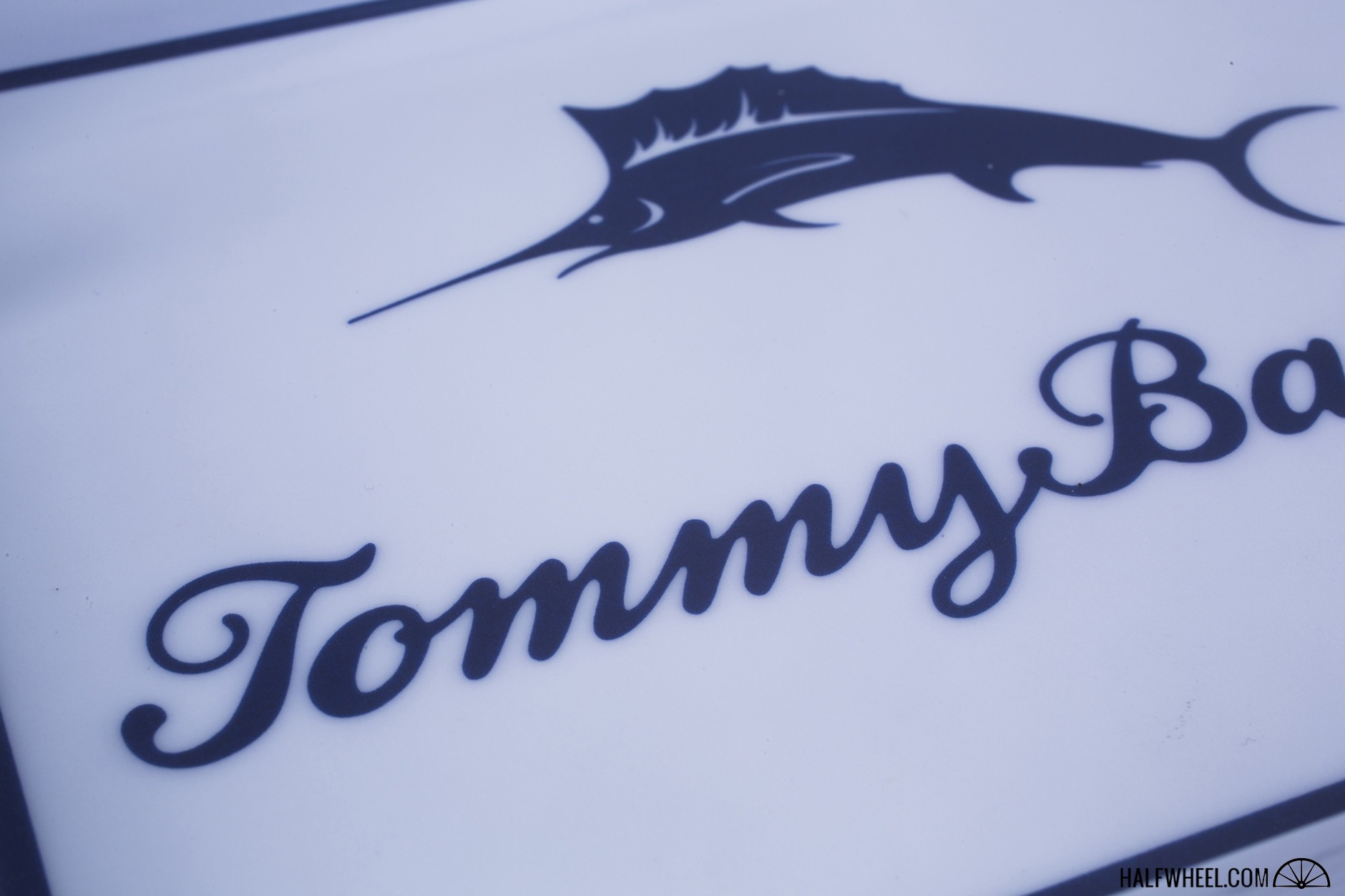 Started in 1991, the brand is inspired by “the refined, unhurried attitude of coastal life.” That idea, and I’m guessing comfort of a button up Hawaiian shirt, was adopted by cigar smokers who in my experience, also trend towards the idea of sitting down with a good cigar and enjoying an “unhurried attitude” towards life.

In 2009, Island Lifestyle Importers (ILI) was founded by Rick Louis and Ryan Frailing, with the idea of creating cigars and cigar accessories that complemented their lifestyle. With company ideals that meshed with Tommy Bahama’s, it was no surprise that not too long after ILI was founded, the two started working together on cigar accessories. In 2015, ILI acquired the licensing and marketing rights for Tommy Bahama and in 2016 debuted at the IPCPR Convention and Trade Show with two new lines of cigars in addition to all their accessories.

The Marlin Indoor/Outdoor ashtray ($35) is a white and blue melamine ashtray has two fingers for holding cigars along with two cigar clips. This version features blue Tommy Bahama lettering and the company’s marlin logo. There is also a black version of the ashtray with a different Tommy Bahama logo printed in the bottom of the tray. The clips design is very similar to a much more expensive S.T.Dupont ashtray. 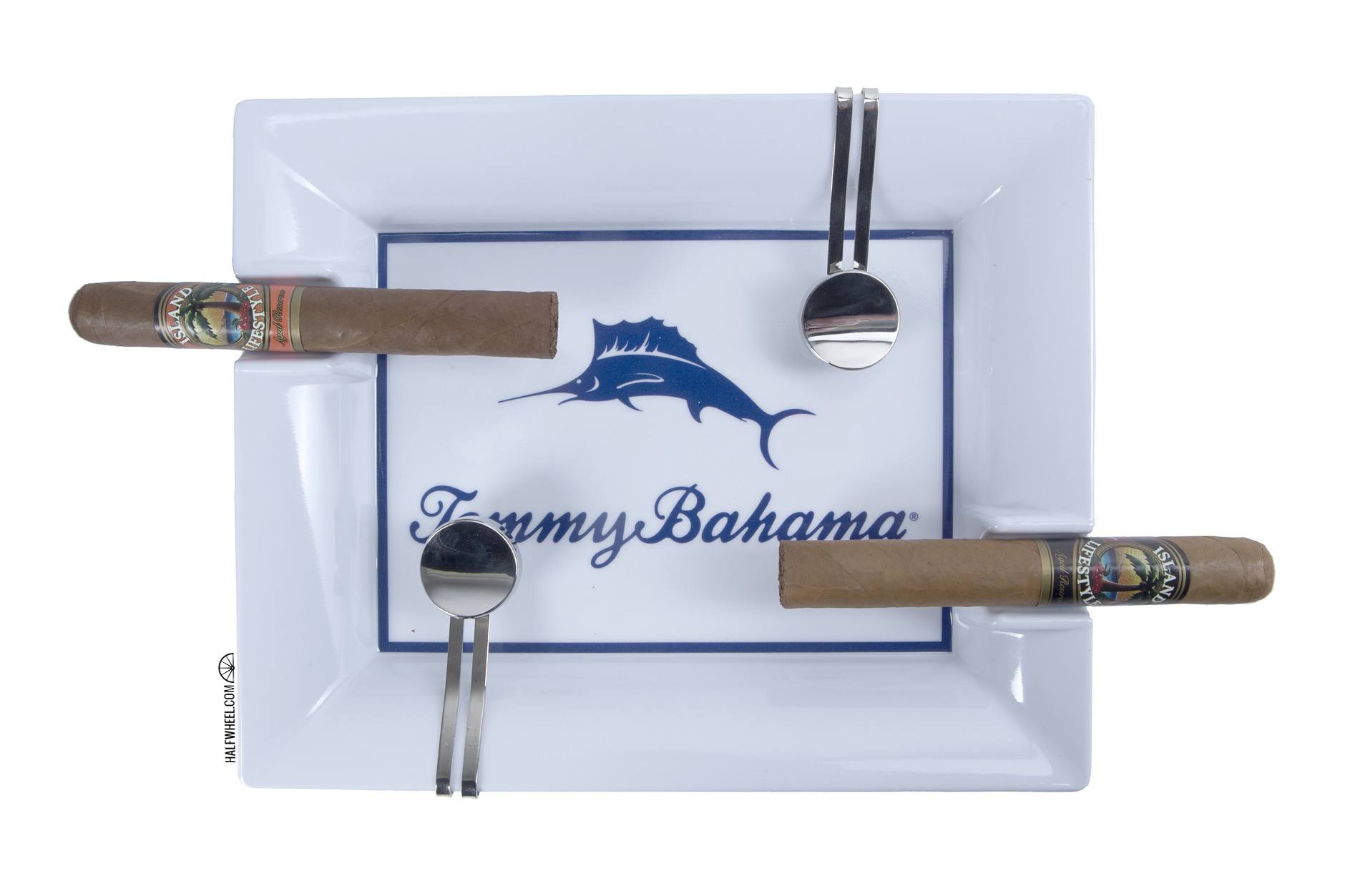 It measures 10 1/2 by 8 1/2 inches and is 1 1/4 deep. An easy visualization of what that would be is to look at a letter sized piece of paper, which if laid over the top would just cover the entire ashtray. For a single person, this is a pretty big ashtray and one that takes up a lot of real estate on the table. Comparatively, the Tatuaje Melamine ashtray measured 7 3/4 by 6 inches—meaning the Tommy Bahama is almost twice the size if you’re looking at square inches.

If you’ve read my previous ashtray reviews, you know I look for two things: how well the ashtray holds the cigar and how well it holds the ash. The good news for the Tommy Bahama is that the larger size accommodates both these things quite well. 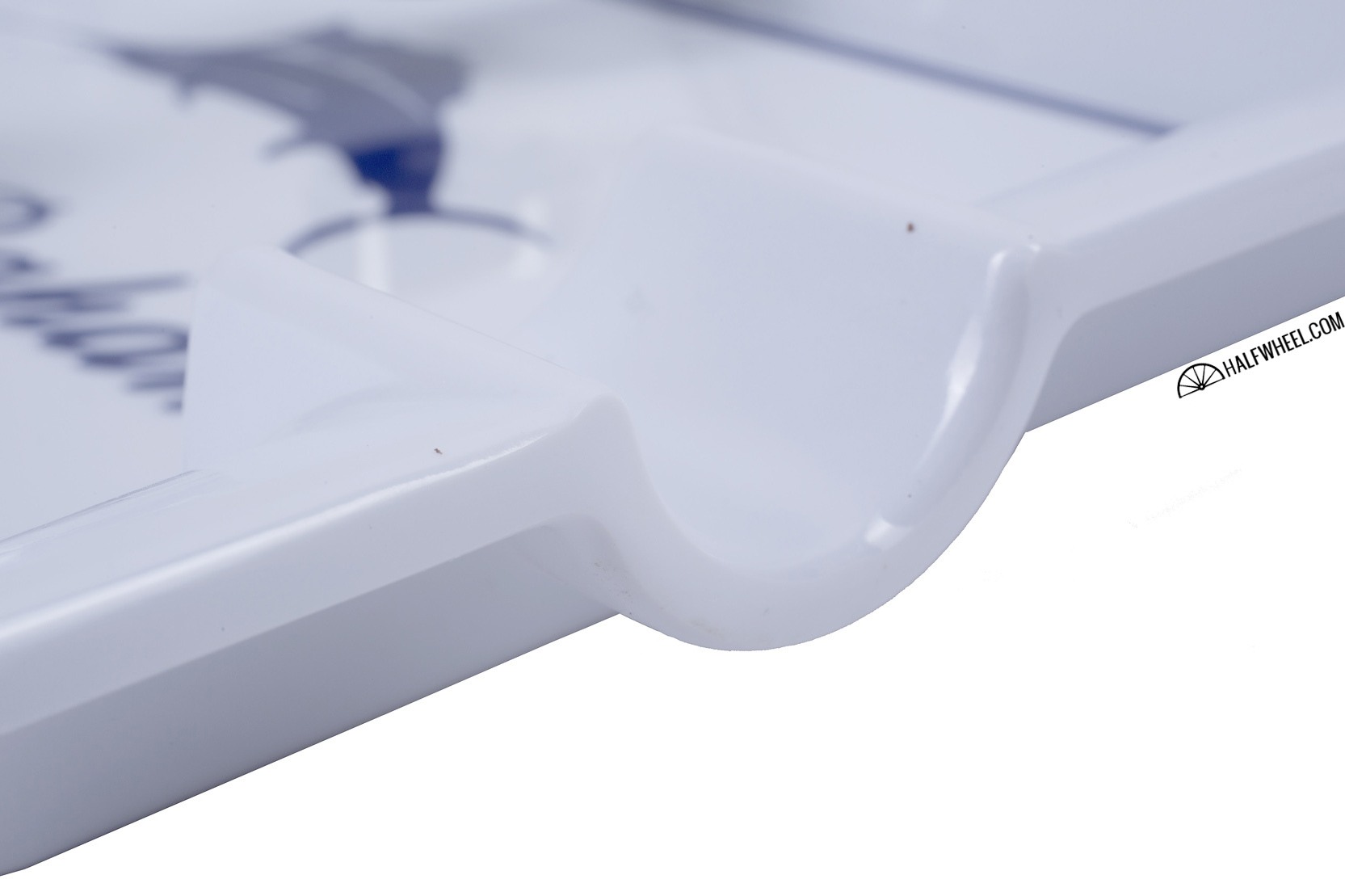 The grooves for the cigar are 1 inch wide, 1/2 inch deep and 1 1/2 inches long. This easily holds cigars up to 64 ring gauge and balances pretty much any length cigar well. The cigar clips that are included with the ashtray can be placed right next to the groove to extend the length another inch and a half, meaning that you could easily place and balance an “A” size cigar—though like most ashtray it might have some trouble with an extreme cigar like the La Aurora La Stravaganza or The Woody by Oscar. Additionally, though I’m not sure this was their intended use or not, the cigar clips can be moved to an area on the ashtray where there isn’t a groove, holding an additional two cigars if you had friends over and needed more places to rest a cigar. 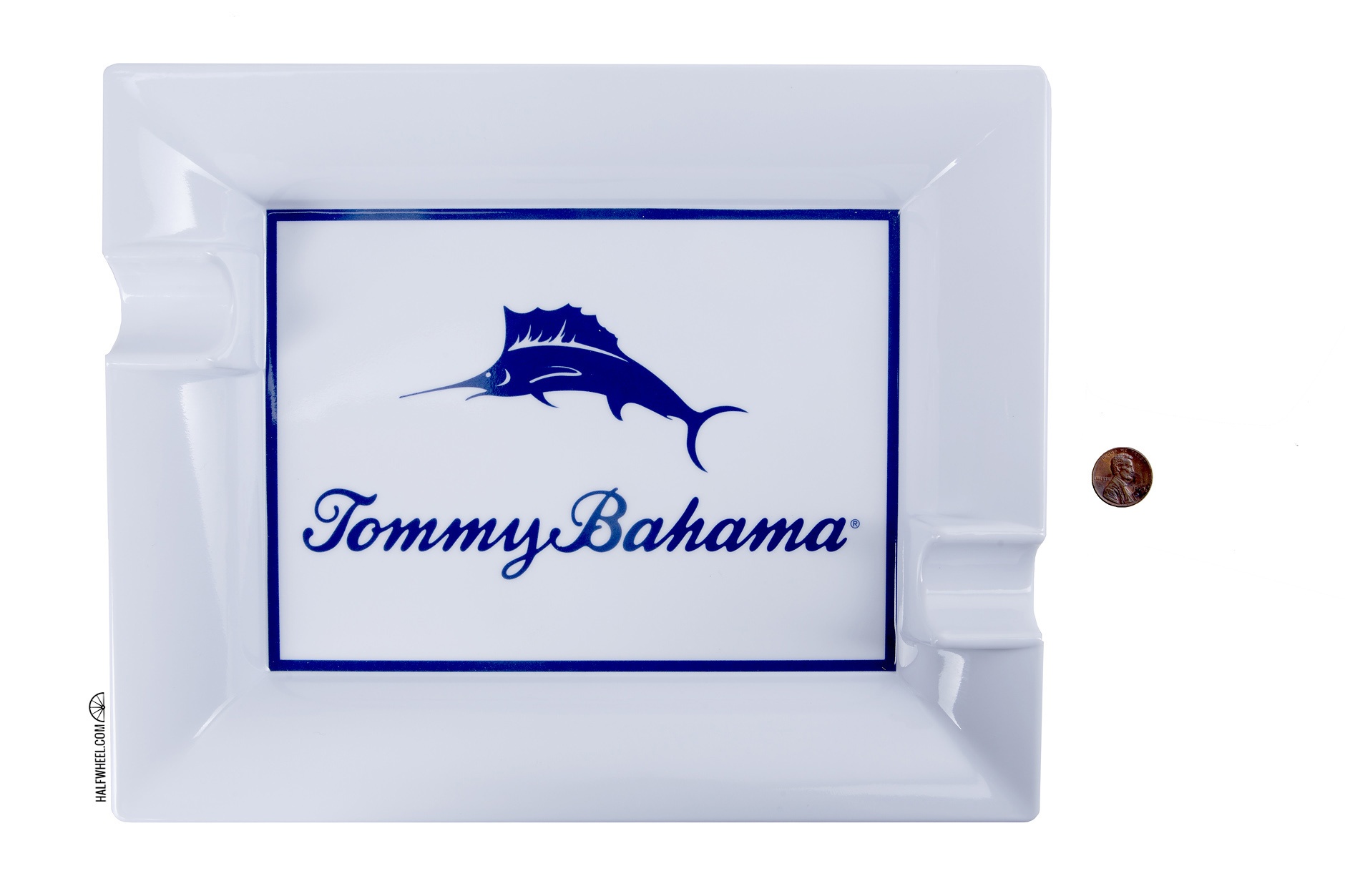 As far as its ability to retain ash, there’s good and bad news. The good news is that it’s huge, just over 80 cubic inches of space to hold ash. I’ve had half a dozen cigar nubs and their ashes in the tray without feeling like I needed to dump it, and though I did, it could have easily held more. The bad news, while minor, is that the sides are curved allowing light breezes to easily blow ashes out and onto the table. Certainly even straight sided ashtrays still experience this, but I’ve found curved sides or traditional bowl ashtrays seem to have that happen a little more. 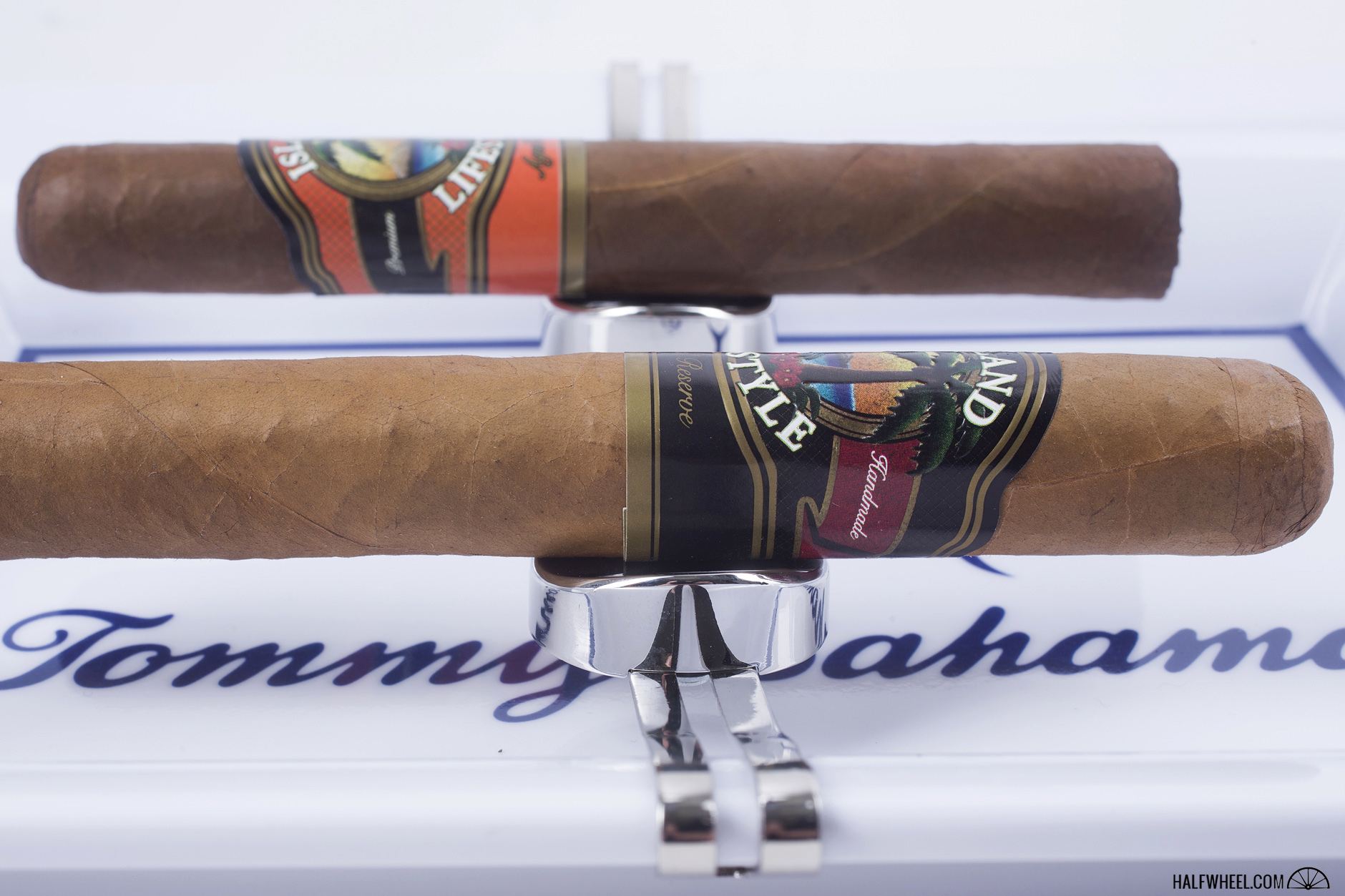 Overall I find myself enjoying the Tommy Bahama Marlin ashtray quite a bit. It does an exceptional job of holding a cigar—I haven’t had one slip, fall or get blown out of the groove yet—and a pretty good job keeping track of all the messy ash. So does it help me get to the mental state of an unhurried coastal attitude? Perhaps, as it’s certainly allowed me to relax and enjoy a cigar without worrying about placing it down perfectly balanced. At the very least, it looks great on the table outside, matching form and function in an ideal balance that I think any cigar smoker can appreciate. So while I might not be reviewing a Tommy Bahama shirt on this site any time soon, if you’re in the market for something Tommy Bahama and cigar related, I think this would be a great addition to your collection.

The ashtray for this review was provided by Island Lifestyle Importers.