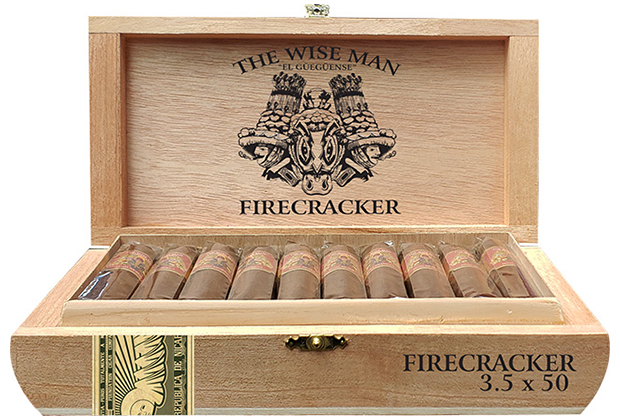 It’s the latest in a series that dates back to 2007. Like the other releases in this series, it’s a 3 1/2 x 50 short robusto with a very long pigtail cap that is made to mimic the fuse of a firecracker. This time, it uses Foundation Cigar Co.’s The Wise Man Maduro blend: a Mexican San Andrés maduro wrapper over a corojo binder grown in Jalapa, Nicaragua and fillers from Jalapa and Estelí, Nicaragua. It is made at Tabacos Valle de Jalapa S.A. in Nicaragua.

“This was a fun project to be a part of,” said Nicholas Melillo, founder of Foundation Cigar Co., in a press release when the cigar was announced in January. “Fitting the depth of The Wise Man Maduro into a 3 1/2″ vitola was a challenge but what a flavor bomb it is.”

The Firecracker Series started in 2007 with the launch of the Don Pepin Garcia Blue Label as an exclusive for Two Guys Smoke Shop of New Hampshire. Since then, United Cigars—which is owned by Dave Garafalo, who also owns Two Guys—has added its own Firecracker cigars, a regular production cigar, and has commissioned a new limited edition each year.

These cigars have come in the same 3 1/2 x 50 size with a long pigtail from a variety of other companies including Dunbarton Tobacco & Trust, Fratello, HVC, Kristoff La Flor Dominicana, Perdomo and RoMa Craft Tobac. Typically, these cigars have arrived ahead of the July 4 holiday.

In recent years, United Cigar has offered its Firecracker cigars—both the regular production line and the limited editions like this one from Foundation—to other retailers.