This fall, Foundation Cigar Co. added a pair of perfectos to The Tabernacle line, and like the line’s biblical name, the cigars draw their names from the same book.

Specifically, they get their names from the story of David & Goliath, which stems from a battle between the Israelites and the Philistines. Goliath, champion of the Philistines challenges anyone to decide the outcome of the battle via a single fight, a challenge eventually accepted by David, who arms himself with only his staff, a sling and five stones. David defeats his much larger opponent, causing the Philistines to flee.

While all the aspects of the Biblical story might not be known, it has gone on to become a widely known tale used to symbolize being able to conqueror a seemingly unbeatable opponent or obstacle, particularly if it is much larger than oneself.

In keeping with the story, David is the smaller of the two cigars, measuring 5 x 54, while Goliath is a slightly thicker 5 x 58. They use the same blend as the other sizes in The Tabernacle line, meaning a Connecticut broadleaf wrapper, Mexican San Andrés binder, and fillers from Honduras and Nicaragua. However, they wear different bands that depict the scene of David standing victorious over Goliath. As for pricing, David is $12 per cigar while Goliath is $14, both before taxes. Both are offered in 25-count boxes.

“Anyone who has smoked Connecticut cigar brands of old knows the Perfecto is a classic size,” said Nicholas Melillo, founder of Foundation, in a press release. “Back in the day it was the vitola of choice for connoisseur. When it came time to create a line extension to the Tabernacle, the blend in these two sizes could not be ignored.”

The line is made at Tabacalera AJ Fernandez Cigars de Nicaragua S.A. 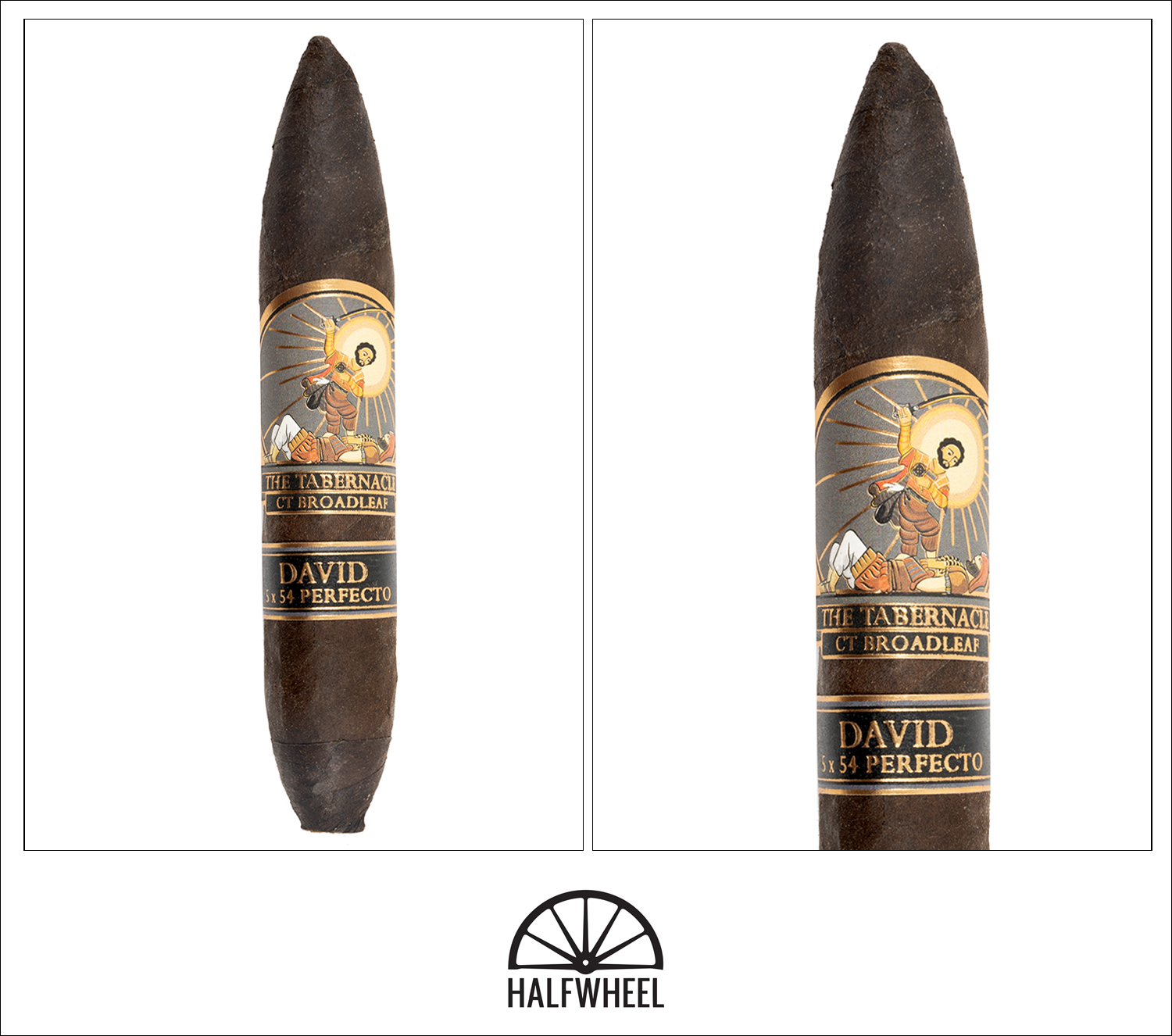 My eye starts by being drawn to the sun on the band, as it is the brightest spot on the entire cigar, and it seems as if from there things progressively get darker including the black background of the bands and the very dark Connecticut broadleaf wrapper. The wrapper leaf is fairly toothy, while veins are noticeable but largely obscured by the bands. With the bands removed from the cigar, the wrapper shows a more rustic look due to a bit of mottling and a more complete look at the vein structure. Two of the samples are rolled rather firmly while the third is bit softer in general as well as in specific spots. All are without any visual issues, though there is a stray glue spot or two on the foot, which has the visible seams of a wrap or two of tobacco as part of its construction. The wrapper has a bit of earthy sweetness, reminding me a bit of being around a blackberry bush but without the vegetal aspect. Beyond that there is dry earth and a bit of dry chocolate, both lighter in terms of presence than one might infer, while one leaf has a smokier finish. The foot builds off of that, adding a bit of wheat bread, which leads me to think of a peanut butter and jelly sandwich. The cold draws are good but can skew tight, something probably not helped by my propensity to take very conservative cuts. The flavor is a bit lighter than the aroma but shares many of the same attributes while adding just a bit of pepper and nudging either the dry earth or a peanut butter flavor closer to the front.

The Tabernacle David opens up with a bit of varied terroir; in one sample that means chalky earth and some subtle white pepper, both of which deliver a tingle to the front half of my mouth, particularly the inside of my lower lip. In another, there’s a bit of earthy sweetness that develops in the first inch, along with more of a black pepper taste, while the third flips those two elements in intensity. As the burn line progresses, a bit more of the black pepper enters the equation, most notably via retrohales, but sometimes it will elicit a distinct physical reaction on the front half of the tongue. I find myself struggling to place some of the flavors towards the of this section, particularly something reminding me of tree bark but which may just be how the current combination of everything is presenting itself. The draw is a bit tighter and smoke production a bit less than I would like, but both are workable. Flavor is a tingly medium to medium-plus, body is medium, and strength so far is fairly mild. Not long into the second third of The Tabernacle David, the first clump of ash drops off, opening up airflow and resulting in a good bit more smoke production, especially for the first sample. I’m not surprised to be getting the kind of terroir that is currently hitting my palate, what is more notable is the variance from one cigar to another. The second sample was much cleaner and vibrant than the first, enough so that I had to amend some of my previous notes. The earthiness is dry and offering a bit of very subtle chalk and minerals, but they are balanced by some chocolate and dark berry sweetness. Retrohales consistently serve as a bit of oomph for the profile, giving it some extra zip in the nose at the moment while also nudging the profile forward a bit. Flavor seems comfortably medium-plus with occasional steps into full territory, body is a solid medium-plus, while strength seems to be medium-full but I’m not feeling any effects from it at the moment. Construction is very good, though the draw has some variance. The final third sees the flavor pick up more than it has previously, suddenly becoming quite vibrant with a dry earthiness that has a bit of lumber to it, along with white pepper and the occasional suggestion at plain, oily potato chips. Only one of the three samples offers enough of it to have me thinking about Honduran tobacco, but when the flavor kicked in, it was almost unmistakable. That said, the amount of change varies, as it was more pronounced in one sample than the others. I often bring up the word terroir in reviews, and it seems particularly fitting here, given the current flavor profile, though that doesn’t mean that the cigar is overly earthy. What earthiness the cigar has can get slightly metallic from time to time as the cigar burns down, as well as a bit more concentrated and grating on the back of the throat, though there is so little of the cigar remaining to smoke it’s hardly a complaint. Flavor finishes medium-full to full, body is medium-plus, and strength is closer to medium. The cigar burned beautifully, with good smoke production, an even burn line and generally good draw, despite some isolated instances of tightness. 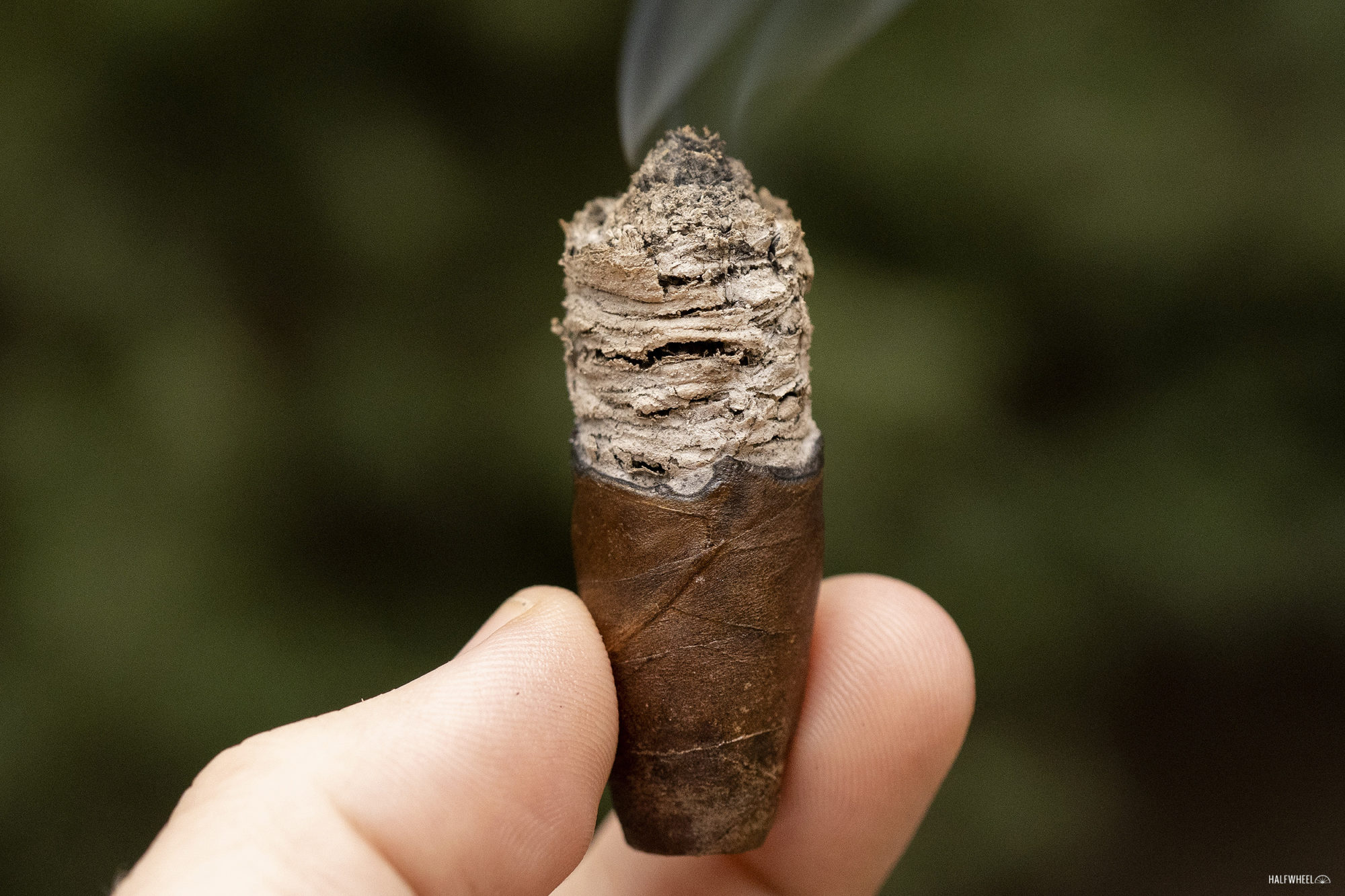 If someone were to ask me my thoughts about The Tabernacle David, I would respond with it depends. One cigar was very good with rich, vibrant flavors, while the other two offered moments that were enjoyable but not a completely flaw-free experience. The earthiness is enjoyable, and while it can offer some brilliant sweetness, it can also get rough on the palate. Similarly, while the supporting flavors had moments, they seemed hesitant to develop enough to fill in or cover those rougher spots. Much like Charlie Minato noted in his review of the corona vitola, The Tabernacle blend seems to show variance among its vitolas, with some clearly performing better than others. For me, the David leaves just enough lacking that I don't think it would be my go-to size, though I remain open to the idea that it might be more appealing to other palates. For my preferences, I still think the thicker ring gauges are the way to go in this blend.