In the summer of 2017, Matt Booth continued his return to the cigar industry after he and his Room101 brand parted ways with Davidoff of Geneva USA by releasing a new collaborative line of cigars with frequent collaborator Robert Caldwell and Abdel Fernández, arguably the most in-demand cigar maker of the moment. That cigar, originally called The Truth, would be renamed to The T. due to trademark issues.

In the meantime, Booth released his own line, Farce, and had been hinting that The T. would soon get a line extension. That would come to fruition in the summer of 2018 when The T. Connecticut was announced, and as would be expected, the cigar uses an Ecuadorian Connecticut wrapper, a Nicaraguan binder and Nicaraguan fillers, with the top leaf replacing the original line’s Nicaraguan-grown wrapper.

It would make its industry debut at the 2018 IPCPR Convention & Trade Show as part of Booth’s Room101 booth, debuting in four sizes. 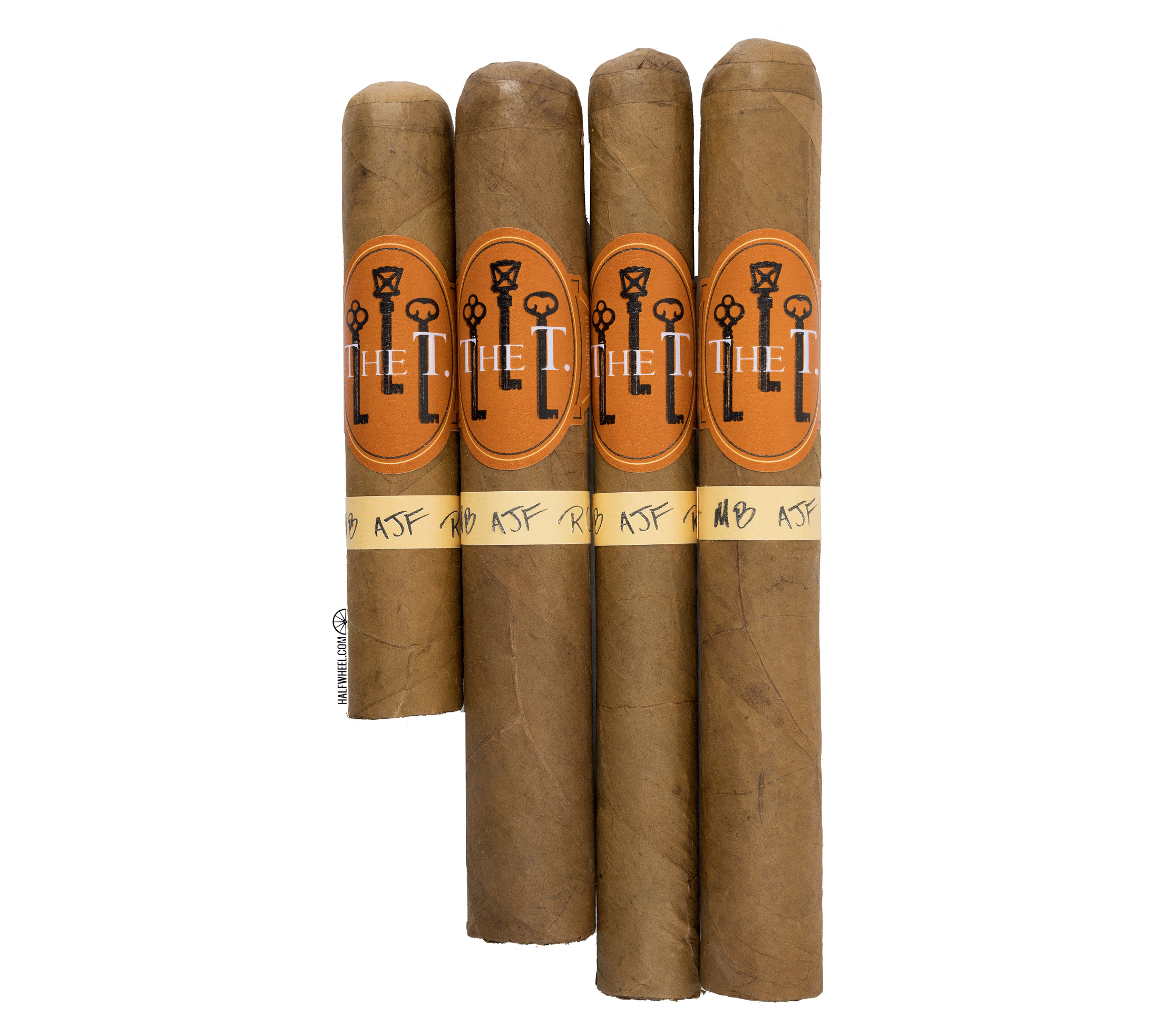 Like the original, it is made at Tabacalera A.J. Fernandez Cigars de Nicaragua S.A. in Estelí. 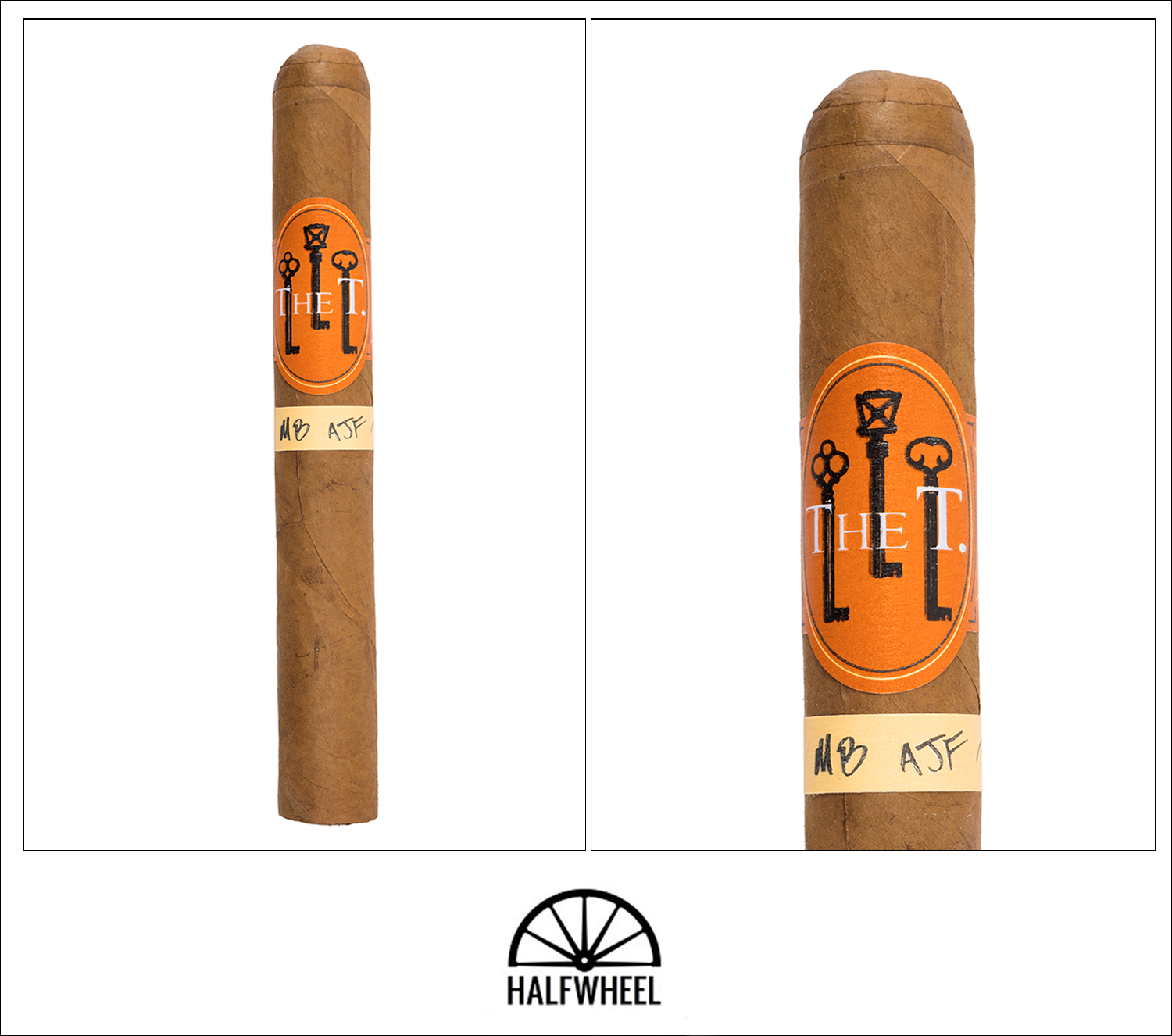 The T. Connecticut Double Robusto definitely looks like a Connecticut with a well-tanned wrapper that sports visible seams and some tugs on the veins, but also a surprising amount of oils and subsequently a fairly smooth texture for the fingers. While the color of the leaf is generally even, one has some particular variance that creates contrast between the lower and middle thirds of the cigar. The cigar itself is firmly rolled to the point of being hard and each sample well capped. The foot is bright with floral notes and very forward with bread and cereal grains, with just a bit of sweetness found on deeper sniffs that comes ahead of some pepper tucked in the background. The cold draw is smooth with just a bit of resistance, slightly creamy but otherwise very mild with some more of the cereal grain notes setting the base.

The opening notes of The T. Connecticut Double Robusto have a bit more kick than what a typical Connecticut might have, as black pepper quickly joins the mix after starting with some creaminess in the initial puffs. The overall profile, in turn, picks up touches of roughness in some samples, a bit more than I’d like to work through but not enough to turn me off to the profile. From there, I get a bit of banana bread through the nose as well as on the palate, both of which are now followed by a reduced amount of pepper. This reordering certainly helps the cigar’s profile as it now shows some depth and complexity as well as a thicker smoke and fuller body, all of which are much more engaging to the senses. The draw is very good in each sample with no combustion issues so far and decent smoke production. 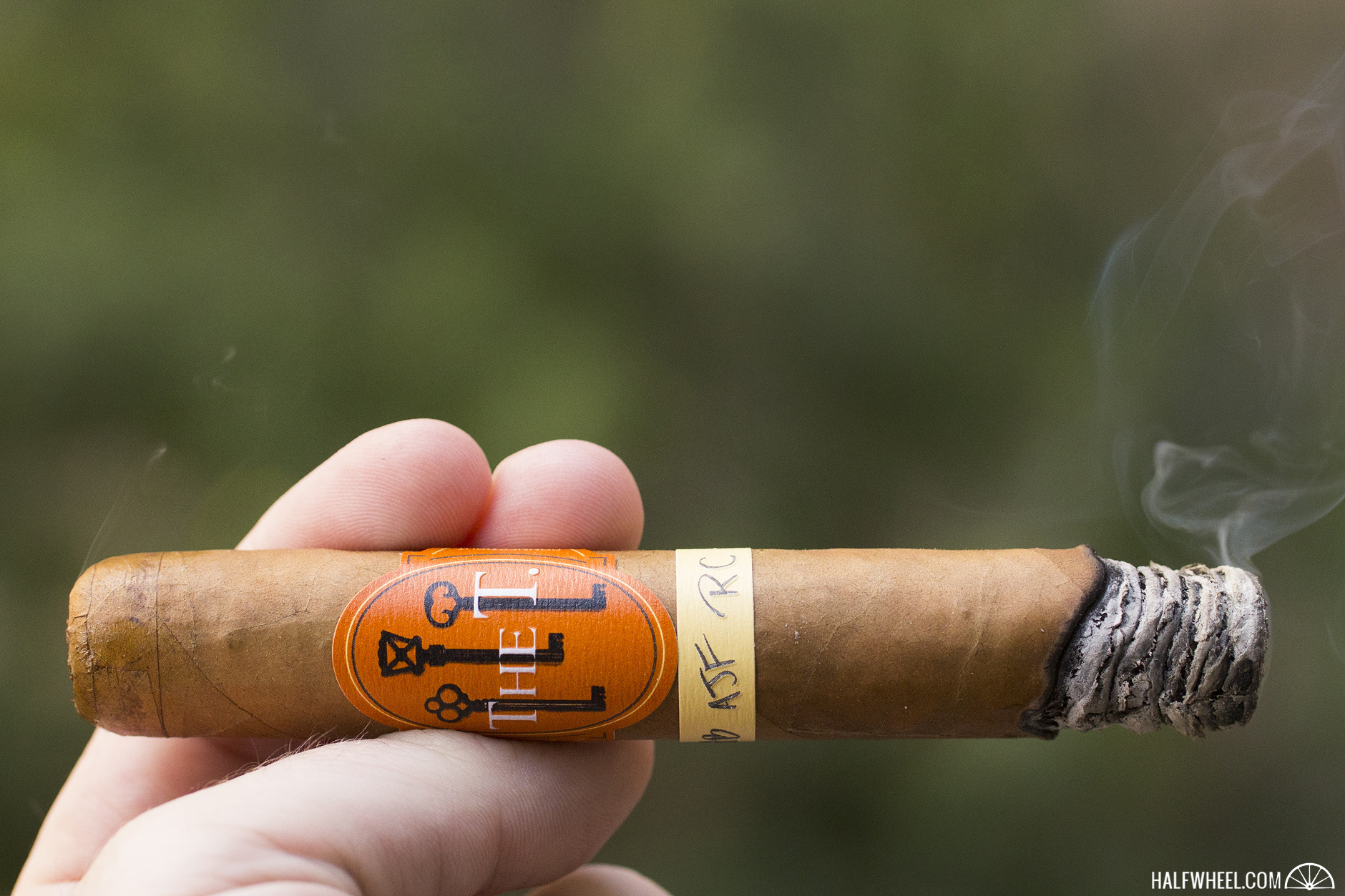 There are a few puffs at the start of the second third that reminds me of the smell of matchsticks, and while I can’t recall ever tasting matchsticks, the dry wood flavor suggests that this might be similar to what they would taste like. If nothing less, it’s a sign that the flavor is changing a bit, thinning in its body and shedding some of the sweetness. A bit of smoky char enters for a brief spell as well, before the flavor moves back to breads, specifically plain bagels, and sweetness is now almost completely gone. The smoky char fades and in its place black pepper returns and brings the cigar to a medium-plus level of flavor intensity, while the body is on the thinner side, though in line with where it has been for much of the way. The second third closes out by offering much more mouthfeel thanks to added pepper and the development of that bread-forward base note, though it seems to be getting increasingly overshadowed by the pepper and char. 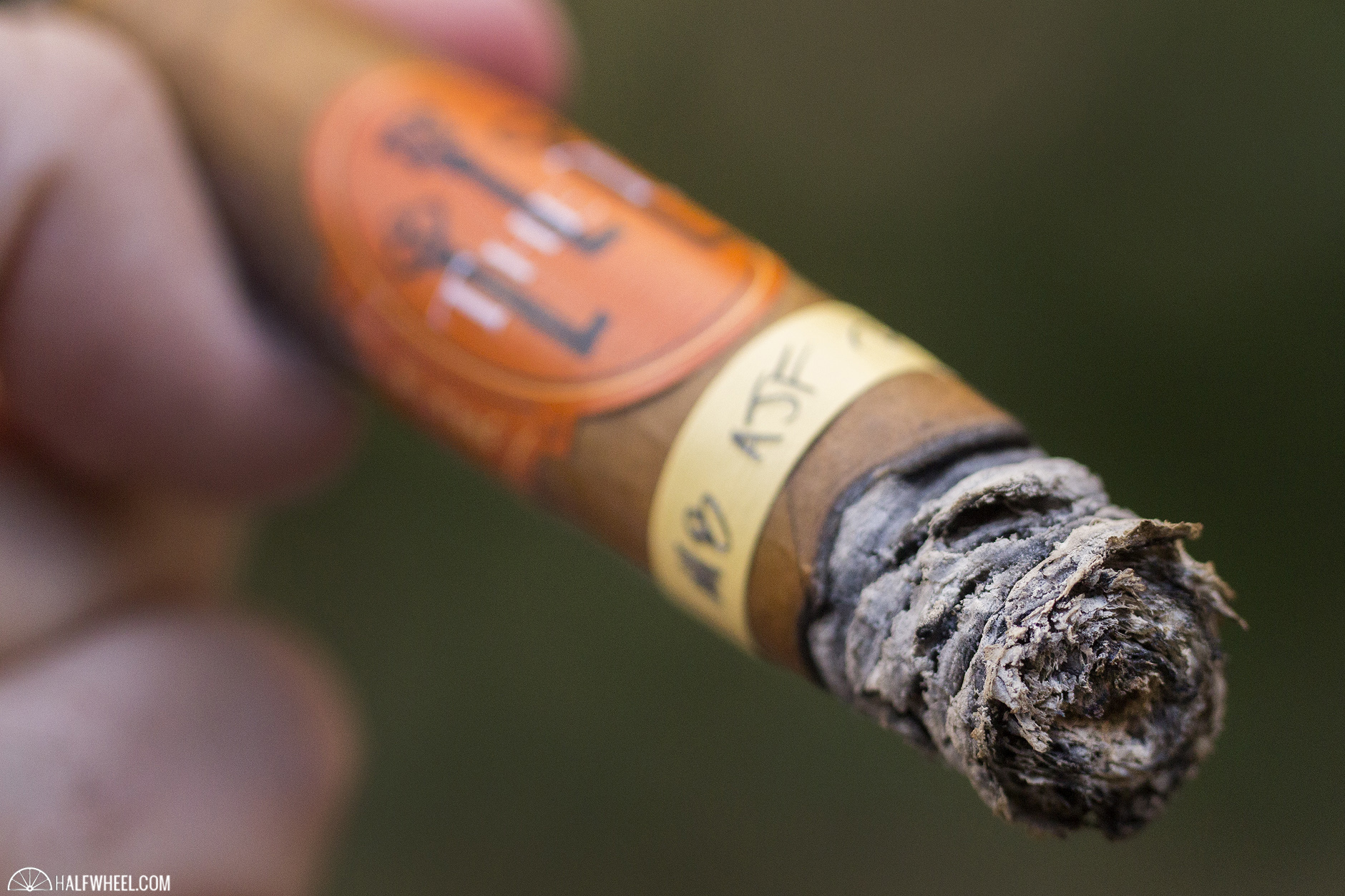 While I’m not opposed to some smokiness and even some char in my cigars, The T. Connecticut’s profile is better when it is at its lowest amount as it keeps the cigar in better balance, which at this point is returning to a dry wood profile that again has me thinking of matchsticks. It’s fairly fleeting and shifts into cedar with a bit more character and tanginess, not quite as good as where the cigar was earlier on, but still fairly enjoyable. Entering its final inch, The T. Connecticut Double Robusto’s flavor continues to stay toasty, treading into charred territory at times, leading to a lingering flavor that is less than enjoyable and a lingering tingle right in the middle of the front half of my tongue. With some slower puffs, a bit of frosted sugar sweetness comes through to help close the cigar out after about two hours of smoking time. The construction on each sample has been near stellar. 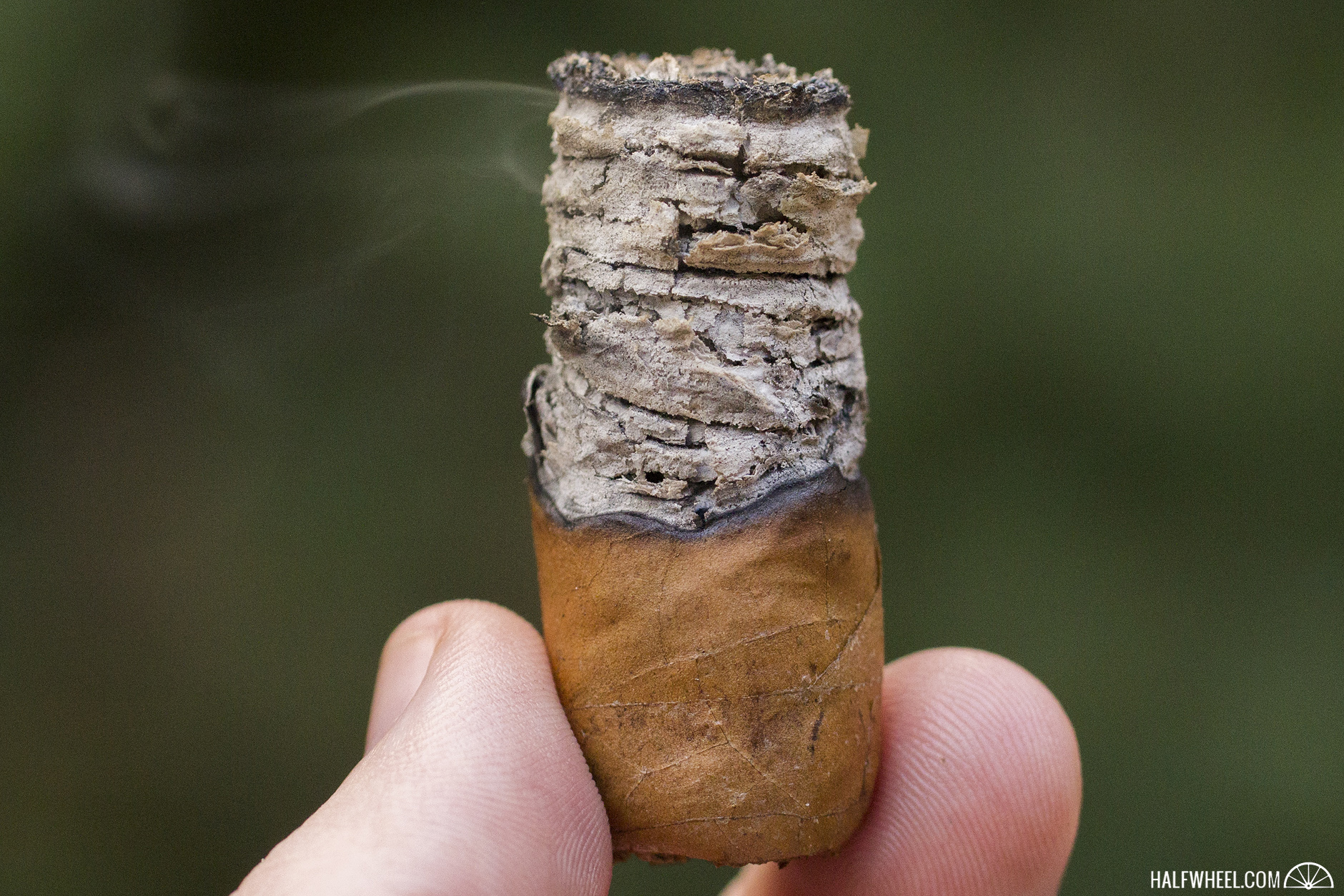 It seems that there has been a renewed competition amongst cigar companies in creating the new Connecticut wrapped cigar's profile, and I certainly think that The T. Connecticut adds a worthy line to the growing list. There are a mixture of really enjoyable spots and others where the profile is peppery and rough, the blend almost forgoing its wrapper and any connotations of what Ecuadorian Connecticut generally tastes like. I'd love to deconstruct this cigar and smoke the components individually to better pull out the individual contributions, as while there are spots the wrapper is allowed to shine, there as many if not more times when it seems the binder and filler are out to disrupt the idea of this being marketed as a Connecticut and all of the connotations that come with that. Despite some roughness, The T. Connecticut is an enjoyable cigar with complexity and progression, and one that would go well with an end of the day spirit and comfy chair.