The King Is Dead Sleeping Beauty

And if you are going to go for it, go for it. 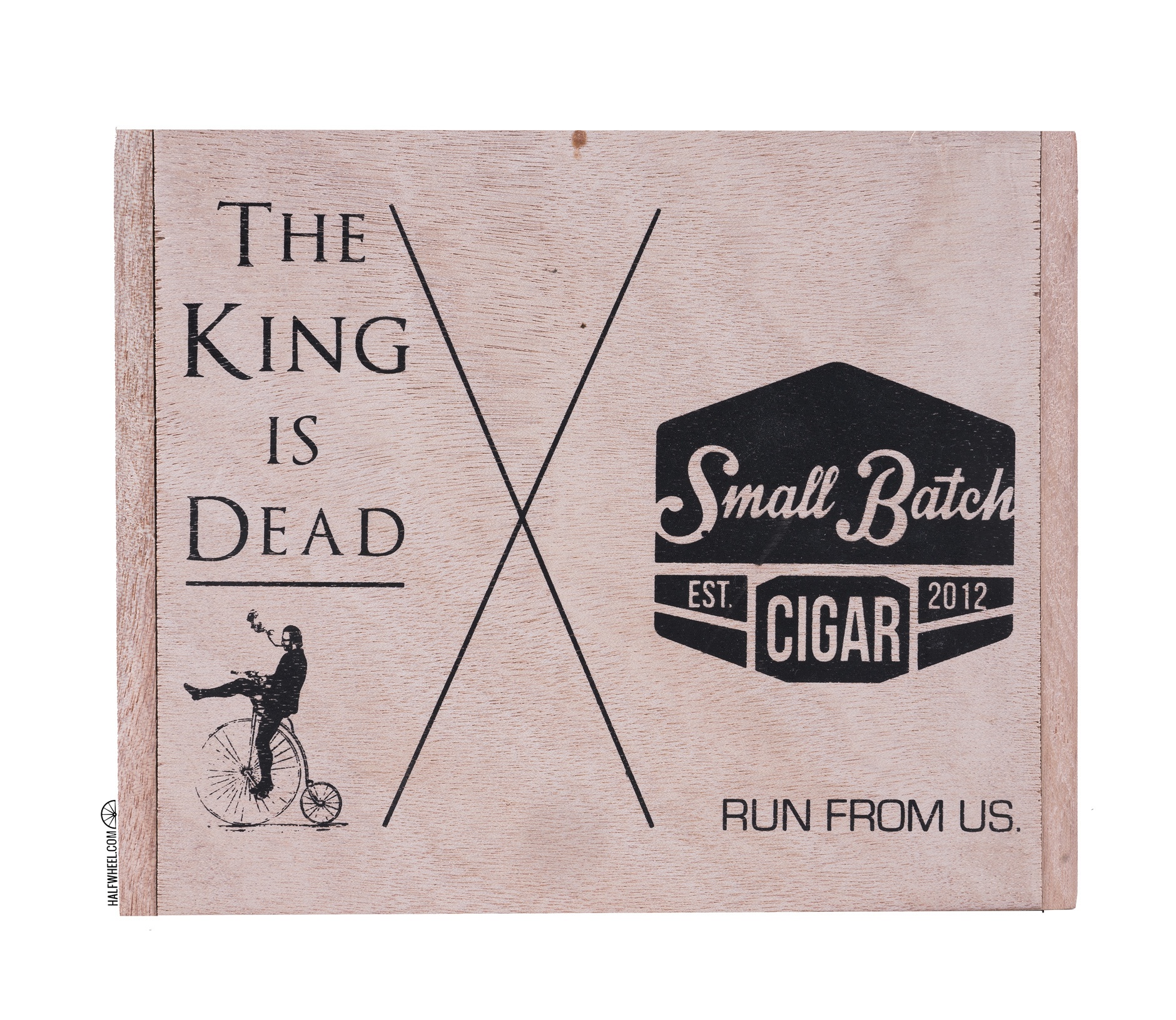 While some sizes in each of the lines have normal names like “toro,” others get unique names. The latest size for The King is Dead follows in the latter. It’s called Sleeping Beauty, though the packaging won’t tell you any of that. What it will tell you—both on the box and secondary band—is that this is an exclusive for SmallBatchCigar.com.

It’s a 5 1/8 x 60 perfecto packaged in boxes of 24. It uses the same mixture of Dominican tobaccos as the regular line—corojo, HVA and negrito—only in a small, but fat, perfecto size. 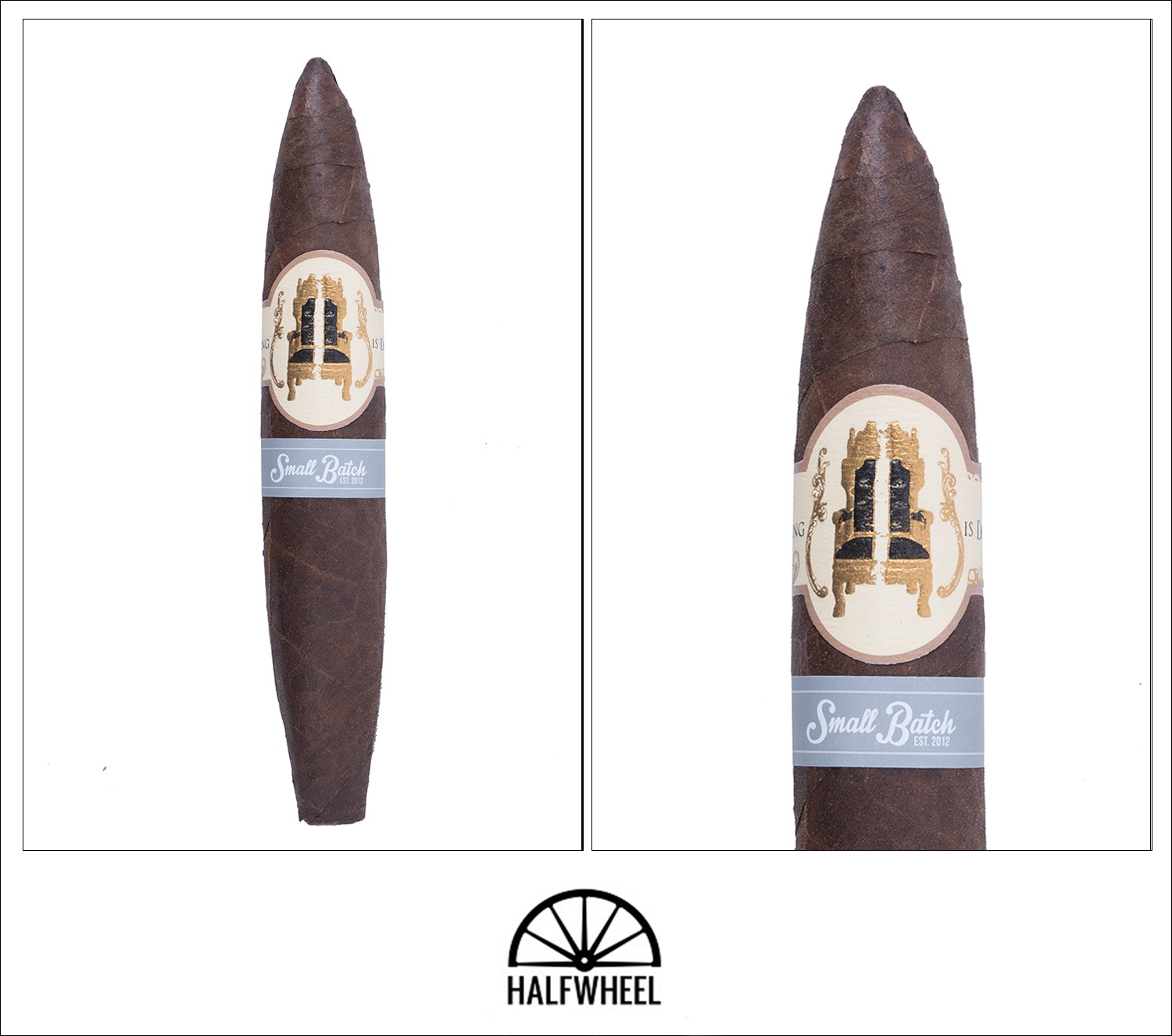 It’s a deceivingly small cigar. While it might be slightly over five-inches in length, the aggressive perfecto tapers make the usable part of the cigar a lot less than the dimensions would suggest. Continuing that theme, while it’s listed at 60 ring gauge, it’s challenging to really come to that conclusion, particularly as the bands cover the bulk of the girth. Aroma off the wrapper is medium-plus with barnyard over earthiness, chocolate and some leather. The foot is sweeter with the flavors more balanced as opposed to a dominant barnyard note of the wrapper. In addition to the leather, barnyard and cocoa there’s also some graham cracker. The cold draw reminds me of Raisin Bran, though joined by cocoa powder, potato chips and some touches of leather.

The Sleeping Beauty begins with some berry sweetness and a big oak flavor over barnyard and cocoa. Surprisingly, each sample has a fairly normal draw despite the taperings on both ends. With each puff, the first third gets decidedly less sweet. It’s earthy with some peppermint and French fries. Flavor picks up to medium-full—from a medium-plus start—while body and strength are both medium-plus. 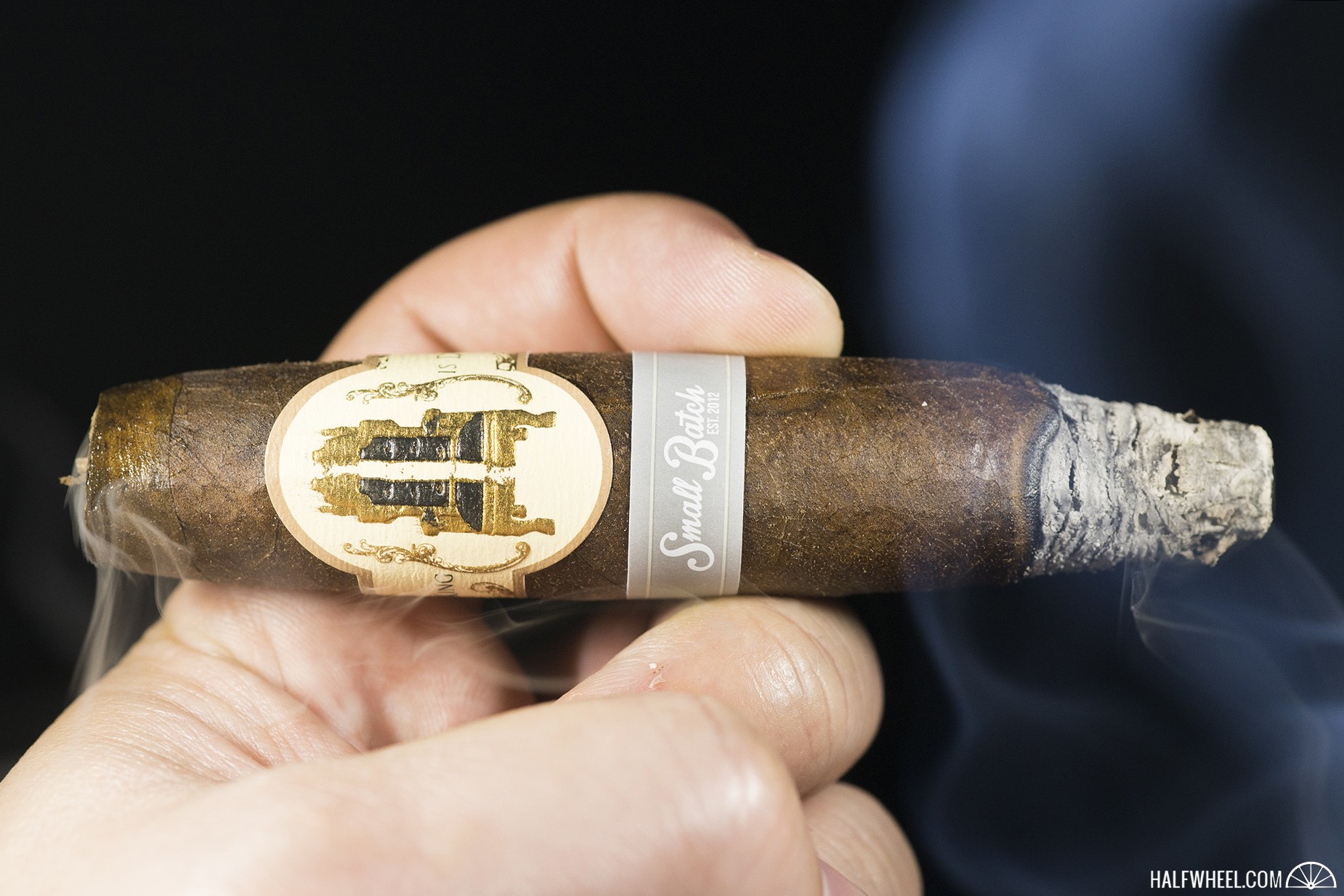 The second third gets some sweetness thanks to a creaminess, but it’s not as needed. A grainy profile has taken over from the meatiness, reminding me of a rich multigrain bread, and it gets joined by some generic meatiness. A bit before the halfway point the retrohales have refined themselves to provide something other than a harsh pepper and are now super creamy with a lemon tilt, a bit like hollandaise sauce, though there’s still some white pepper. Two samples have a distinct hamburger-like meatiness shortly after the halfway point. A touch-up is needed on all three cigars to fix one side of the wrapper not burning. 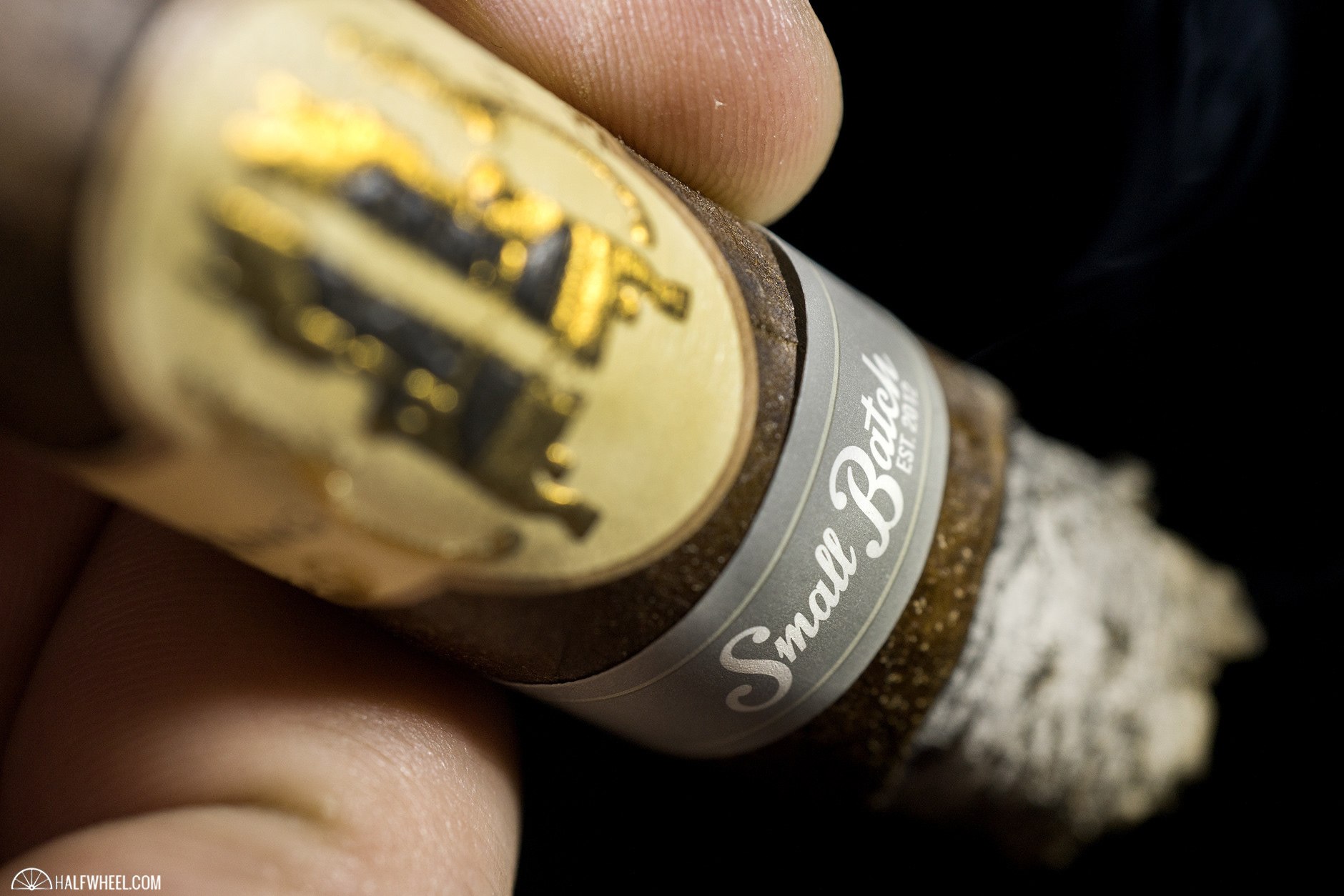 Finally, the Sleeping Beauty’s flavor profile seems to have found balance. There’s earthiness, Worcestershire sauce, a touch of floral flavors, grains and a sweet barbecue sauce. Blowing smoke out through the nose shows it still retains the pepper, though there’s a lot of lemon right before that. In addition, the feel of the pepper seems to be heading towards more of a burning flavor, reminding me a bit like a tequila shot. Flavor finishes medium-full, body is medium-plus and strength is medium-plus. Construction-wise, two cigars see another touch-up, though this time more for smoke production. 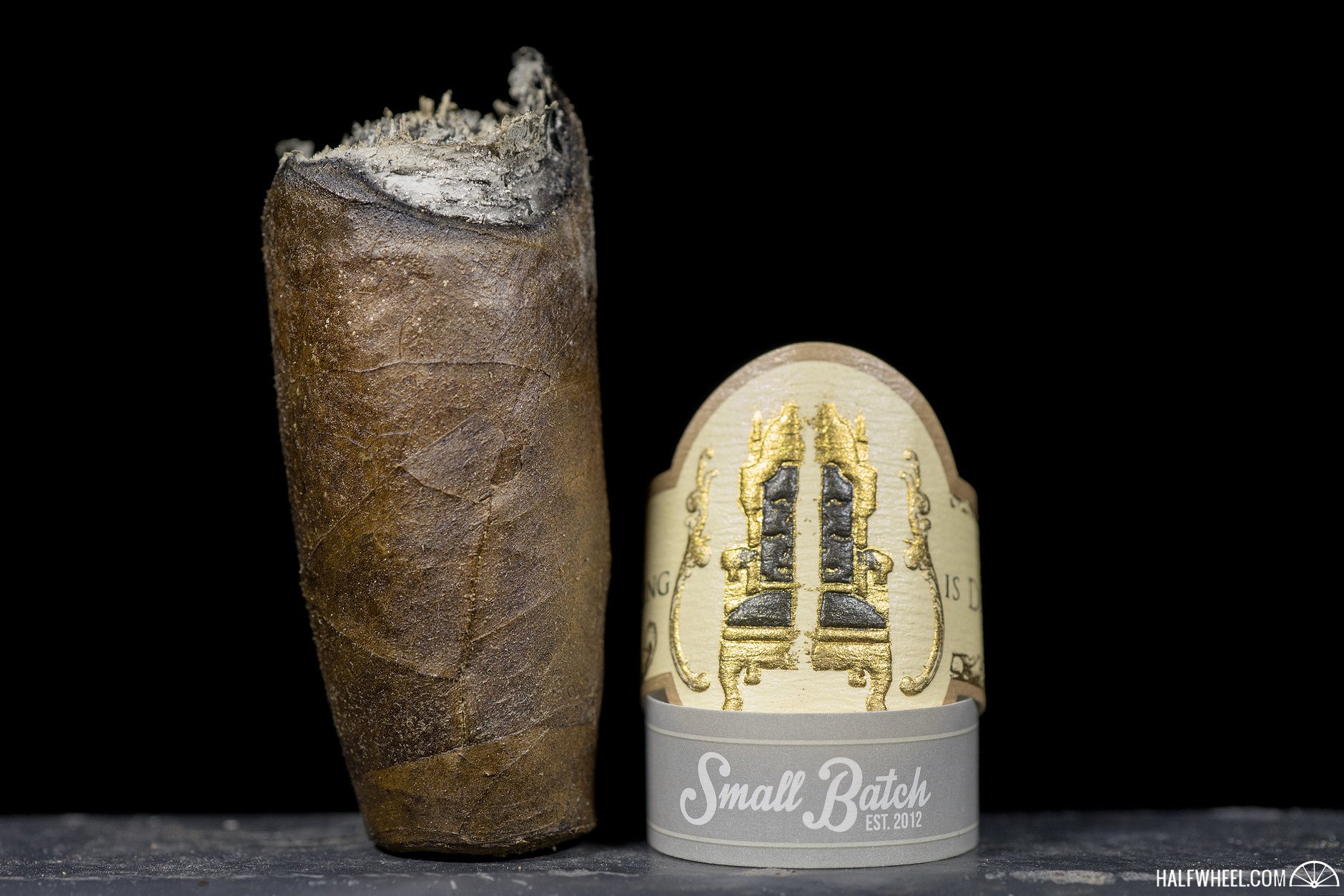 Sometimes you just need more. It’s not that the Sleeping Beauty doesn’t provide enough flavors, but I felt like there wasn’t enough time for the cigar to develop. The final third was excellent but short, and I'm convinced the payoff is worth it. This is still a very good cigar, marred by some construction issues, but I’d be hard-pressed to pick this over most of the other sizes in the line.