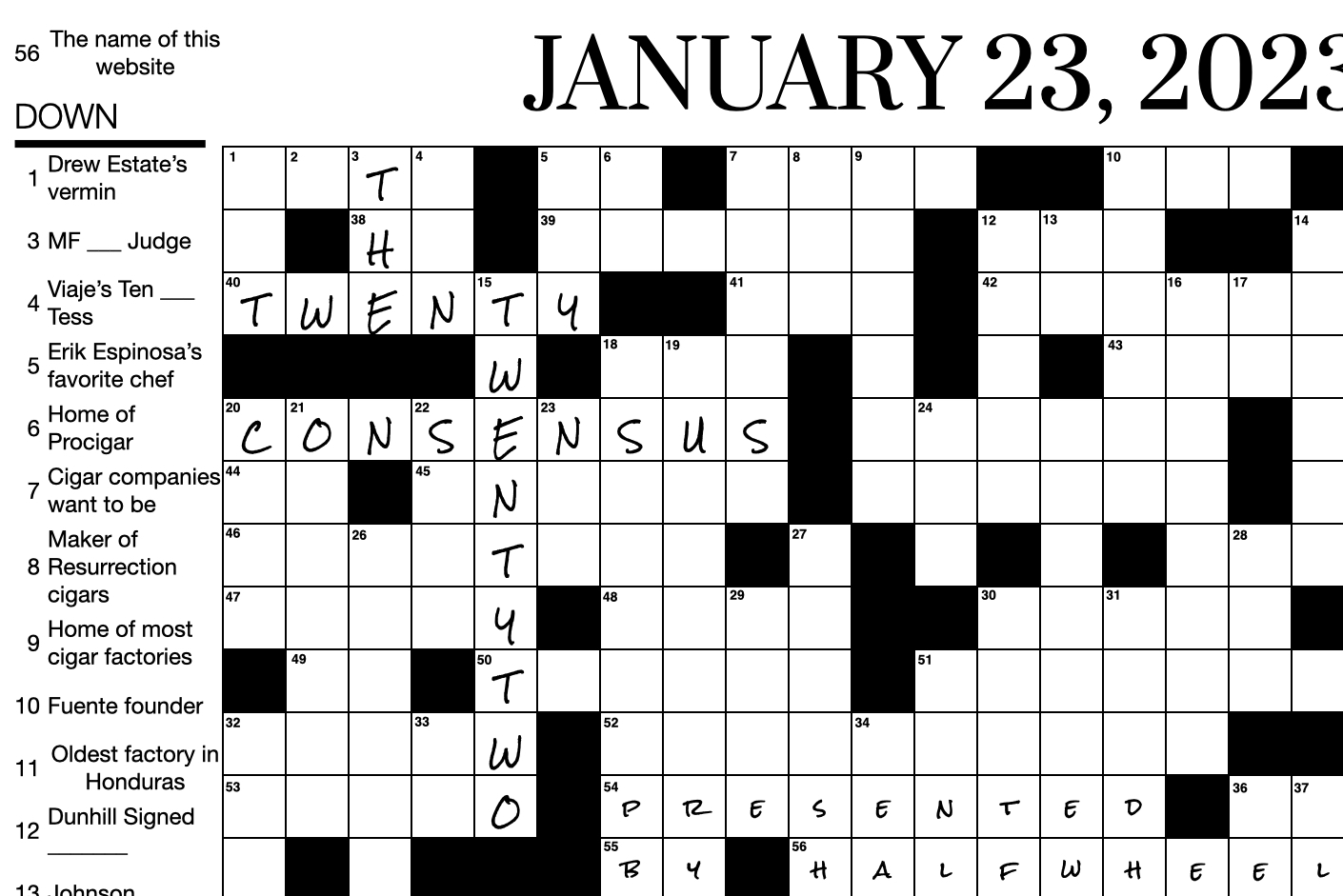 In college, I once proposed a hilarious—albeit deranged—sociology study. Imagine if you could take someone who didn’t know anything about American sports and put them in a place where the only access they had to the outside world was ESPN’s First Take back when Stephen A. Smith and Skip Bayless were on it. After a year, you take said person and ask them about sports.

Their understanding of sports would be, err, interesting.

The Consensus operates somewhat like that, but for Best of cigar lists. Imagine you knew someone who didn’t smoke cigars but saw all of the Top 25/Top 10/etc. lists put out by various genres of cigar media. They’d also need an incredible memory and decent addition/subtraction skills.

Their understanding of what the best cigars of the year would be based not on their own experience, but rather, on the lists produced by various cigar media. And imagine if they took the lists at basically equal value.

That’s The Consensus, though it’s a spreadsheet, not a person.

I started this concept more than a decade ago with the goal of trying to see if there was a commonality within cigar media. I never really aimed to figure out what the best cigar of the year was—after all, I could tell you my personal favorite—but I wanted to see what the collective cigar media had to say.

As always, I will repeat some disclaimers:

For those unfamiliar with The Consensus, it works like this.

I try to look at as many top 10/25/etc. lists published by cigar media outlets including blogs, magazines, podcasts, YouTube channels, etc.

A total of 471 cigars were nominated by 35 media outlets; the results are as follows.

This is the second consecutive year Sin Compromiso Paladin de Saka has made The Consensus.

This is the second consecutive year that the Liga Privada H99 has made The Consensus.

Room101 (Since this cigar was released, Room101’s cigar brand was acquired by General Cigar Co.)

This is the second consecutive year that the Sixty by Rocky Patel has made The Consensus.

15. Guardian of the Farm Cerberus

17. Plasencia Year of the Tiger

*Prices are likely MSRPs upon a cigar’s introduction.

Country of the Year — Nicaragua

There’s not much to talk about here as the numbers are pretty close to last year. Nicaragua has won this award every year that The Consensus has taken place. The top nine cigars on this list are all made in Nicaragua.

Not only did Abdel Fernández’s main factory—Tabacalera AJ Fernandez Cigars de Nicaragua S.A.—take the top spot in convincing fashion but his second factory—San Lotano—finished in fourth. Five of the lines—Olmec Maduro (#2), Knuckle Sandwich Habano (#4), Olmec Claro (#7), New World Dorado (#12), 1502 Aniverario 10 (#19)—placed inside the Top 25, and tied for 26th was another, Knuckle Sandwich Maduro. This is the second time that this factory has won the award.

A point to mention for General Cigar Co. at #2. Last year, General bought Room101’s cigar brand, and I don’t see any reason why it shouldn’t get the Room101 label’s points for The Consensus.

A Brief Comparison of Data

I have looked at a few different data comparisons for the last few years, I will continue that practice this year.

This looks at how many points the #1 cigar on The Consensus got and what that represents in terms of points.

This is the same metrics, but for the #25 cigar.

I’ve long been a fan of this metric, which evaluates how much greater of a share the #1 cigar got compared to the #25.

This looks at the same metric but comparing the #1 and #2 shares.

If anything, this really reinforces that the 2021 winner—Undercrown 10—really captured itself as a consensus in a manner that hasn’t been true for the other four years.

By every metric (number of lists, number of publications, number of points awarded), this is the second smallest pool of data that The Consensus has drawn from in the last five years. In short, there were fewer lists. A lot fewer.

In direct comparison to 2021, here’s the shrinkage:

There are a lot of variables that make declaring a proper rate of decline somewhat difficult, but it is a noticeable drop in the number of lists being used.

The largest cause of this is certainly YouTube’s 2022 policy changes with regard to channels that videos about tobacco products. Following a series of strikes—YouTube’s way of saying “you did something wrong”—content creators like Cigar Obsession and others voluntarily and involuntarily have found themselves no longer publishing on YouTube. While Bryan Glynn was never one for Top 10 cigar lists—and as such, I don’t believe has ever been part of The Consensus—YouTube has been the main source of growth regarding The Consensus’ pool of data.

That came to a crashing halt in 2022. While there are still many cigar-related YouTube channels, there are a lot fewer. Furthermore, there are a number of YouTubers who seemingly stopped publishing at some point in 2022. That churn is normal, but it was clearly accelerated this year.

Other reasons why there are fewer lists:

Guy Fieri, Welcome to The Consensus

This I did not see coming.

Obviously, Guy Fieri is an incredibly popular TV personality. Espinosa ensured he was at the PCA Convention & Trade Show, which I’m guessing helped. Furthermore, unlike the other major celebrity collaboration of 2022—Drew Estate’s M81 Blackened, in collaboration with members of Metallica—the Knuckle Sandwich cigars came out in the first half of the year, which increases the likelihood of inclusion.

For those wondering, the points came from all over the place: multiple magazines, lots of bloggers—Blind Man’s Puff had three Knuckle Sandwich cigars on its list—and plenty of YouTubers.

I removed the category from the spreadsheet that tracked whether a cigar was new, though not before I did most of that work. This was becoming overly complicated for several reasons—did the SakaKhan come out in 2021 or 2022—and I’m not sure what value it had.

It’s been replaced by a category that I think is far more interesting. How many lists does this cigar appear as the #1 on?

Because some publications will have two different lists—usually multiple people’s lists are presented, meaning there are two #1s, two #2s, etc.—this could get rather complicated. Furthermore, I was more curious about the undisputed status, so that’s what I measured.

Congrats to the following blends that managed to get a #1 multiple times:

Brian Hewitt of Stogie Review performed a similar concept in 2010, which you can read here.