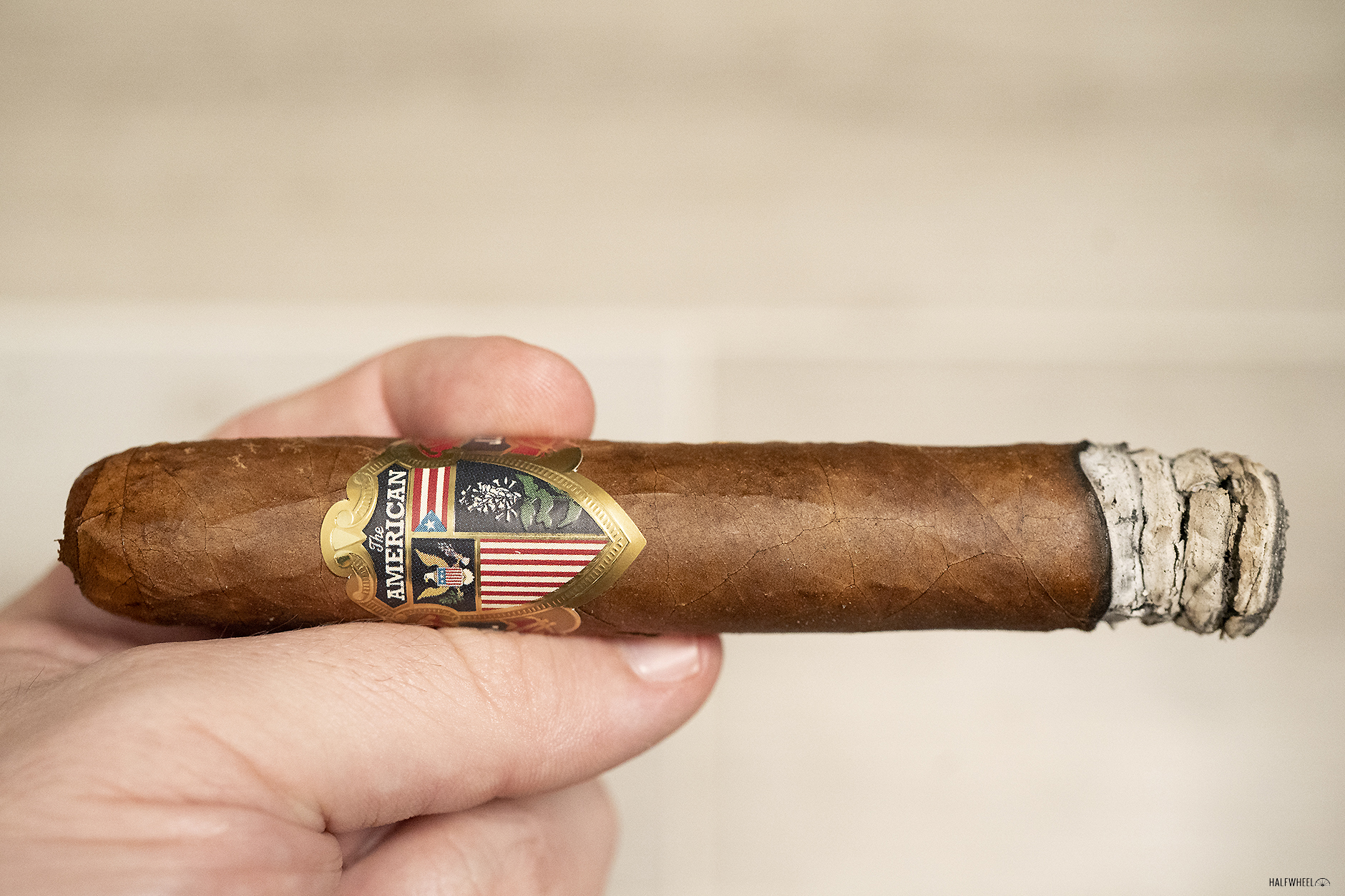 There have been some ambitious projects in the cigar industry, but in the decade-plus that I have been actively covering the premium cigar industry, few have seemed quite as ambitious as The American. It’s a J.C. Newman project spearheaded by fourth-generation family member Drew Newman, whose title is general counsel, but in reality, his role is much more than that. But more on that in a bit.

Why is this product so ambitious? Because as its name alludes to, this is a completely American-made cigar, emphasis on the word completely. It uses a Florida Sun Grown wrapper from Jeff Borysiewicz’s tobacco farm in Clermont, Fla. The binder is Connecticut broadleaf from Foster Farms in Windsor, Ct. and the fillers include the aforementioned Pennsylvania tobacco as well as Havana-seed fillers also grown at Foster Farms.

But beyond that, the bands are made in America, at Action Label in Sanford, Fla. Millennium Wood Box in Miami makes the boxes, while HSA Cigar Molds in Dade City, Fla. makes the molds. Even the cellophane is American-made, coming from Reynolds Packaging in Green Bay, Wis. And all those pieces come together at J.C. Newman’s El Reloj factory in Tampa, Fla., which is coming up on its 112th year of operation. For an industry most closely associated with the Caribbean and Central America, to create a completely American-made cigar is certainly deserving of the word ambitious.

The American debuted in May 2019 in four sizes: Robusto, Toro, Churchill and Torpedo. Since its launch, the company has added two cigars, the first of which, the President, comes in a glass tube and is only available at the El Reloj factory in Tampa, Fla. Then during the summer of 2021, J.C. Newman added a sixth vitola to The American line, a beefy 5 1/2 x 56 double robusto that became the sixth—and thickest—offering in the line. *Not pictured, though it’s the same dimensions as the Churchill

Of note, the thicker ring gauge of the Double Robusto has allowed for a bit more Pennsylvania ligero, which the company says gives this vitola a bit more strength. The first sample of The American Double Robusto that I smoke has a lighter wrapper than I remember from previous samples I’ve smoked, and it has more variance in color. It’s particularly noticeable around the seam lines, and on this sample, the cap is noticeably different from the rest of the wrapper. It’s also seemingly isolated to just one sample, as the others are much more even and consistent in color. It’s a leaf that has a good bit of visual texture due to its veins and mottling, while it’s easy for the fingers to pick up some oily suppleness from the leaf. The cigar is rolled well, uniformly firm with a bit of give. The foot has a cool and sweet initial aroma reminding me of a glazed old-fashioned donut at first, before picking up a bit of banana peel and only a bit of pepper that comes out after several sniffs. Individual cigars branch off into directions that explore bread and toast, and lightly sweetened corn flakes, while one sample has a noticeably soft, almost fluffy texture to its aroma. The cold draw allows air to move easily, with a bit of sweet bread and very little pepper. Overall it’s a milder profile than the aroma, and as such I find myself thinking that I’m not crazy about the 56 ring gauge of the cigar, which is right on the border of a cigar I’d purchase with my own money unless it had a box press.

The first sample of The American Double Robustos starts off mellower than I remember it, medium-bodied with a bit of light pepper and a dry creaminess, which as the flavor progresses reminds me a bit of a lightly powdered donut. The other two are  much more pepper-forward, particularly in a retrohale that I take at the completion of the lighting process. As the cigar gets burning, it takes on a slightly dry profile, or at least that’s what the end results give me with a toasty, peppery finish. There are puffs where I’m inclined to rethink my labeling of the profile as being dry, but it’s impossible to separate the initial flavor from the finish, so I’m sticking with it. Retrohales are led by white pepper but can be fairly soft on the nostrils thanks to some creaminess and fuller-bodied smoke, though I can tell the retrohales are building in intensity, particularly as the second third approaches. As the first third comes to a close, something about the flavor has also changed that makes it sharper on the tongue, though early on I can’t quite put a name to it. Construction is generally very good, as the draw is easy, smoke production is plentiful and the burn line is even. The one aspect I fully anticipate having issues with is the ash, which seems quite fragile. Flavor is medium to medium-full, particularly depending on how much I choose to retrohale, while body is a solid medium to medium-plus and strength is mild so far.

If the first third of The American Double Robusto is indicative of what the next two thirds will offer, there could be some back-and-forth between a fuller, drier, more peppery profile, and a softer and creamier expression of the blend that doesn’t hide the pepper but uses it more as an accent. For my palate, the softer profile is a bit better as it invites exploration of its complexity, whereas the brasher expression is a bit more of a challenge to take in everything it has to offer. There isn’t quite as much creaminess as I had anticipated, with the flavor heading more towards a vibrant, sensory-stimulating one as opposed to the softer version. That’s because the second third sees the cigar pick up a bit of a smokiness to its profile, while the base flavor almost screams of a hearty toast, before a bit of creaminess emerges as the flavor settles on the finish. Retrohales continue to be quite good, particularly if you like a bright, vibrant white pepper and a bit more pronounced creaminess. By the midway point, the retrohales are generally quite hearty, driven by black pepper and shedding whatever supporting aromas were enveloping and softening it in the first third. The char note now spins off into flavors of grilled chicken and French fries, which are challenged to share the profile by roasted, unsalted mixed nuts not much later. While the smoke and flavors might have a bit more character than I’d like, the profile is remarkably balanced, checking in at medium-plus in strength. Body is also about medium-plus, while strength feels shy of medium. Construction is very good, though the flaky ash has me knocking it off much more aggressively than I would otherwise. Pepper has been vibrant since the start of the cigar, but as The American Double Robusto gets into its final third it feels particularly crisp. This is particularly true in retrohales, though it’s nowhere near too intense or too plentiful for my liking, affording me the opportunity to take as many retrohales as I’d like. Core flavors of dry, mixed nuts and toasty bread continue to flex their muscle, giving the cigar a dry, somewhat grainy profile at times but one that is still agreeable and not yet calling out for a beverage to rehydrate my mouth. Given the path that the cigar has been on, I’m not surprised that black pepper continues to be a fairly significant part of the profile, but what I am more intrigued by is how it is more closely integrating itself into the other flavors, particularly on the finish, now imparting just a bit of a charred wood flavor on my taste buds. The final inches bring about a bit drier expression of the profile, reminding me a bit of kettle-cooked potato chips while the other flavors that have been integral to the core profile remain. Construction—ash notwithstanding—and combustion continue to be very good. The profile finishes medium-full, body is medium-plus, and strength is medium at most. It's been some time since I've really explored The American line, and as I mentioned early on, this new vitolas definitely presented the blend a bit differently from how I remembered it. There's a different kind of strength, which may well be attributed to the additional Pennsylvania ligero, though that didn't seem to bring on the kind of strength that leaves me feeling woozy. Rather, the flavor seemed a bit brasher at points, and if there's something I will take away from this cigar, it's how crisp, toasty and peppery it tends to be from start to finish, an extroverted profile that isn't shy to go up and introduce itself to your taste buds. The softer expressions that emerge in the second third are where I found the high spots, as they allow for a bit more exploration of the blend's nuances, since the majority of the cigar is quite forthcoming. I will say that outside of the fragile ash, the construction was quite good, so kudos to the team at El Reloj who made these, as they performed flawlessly. As noted in the introduction, The American is an incredibly ambitious project, and one that is delivering an impressive finished product at the moment.