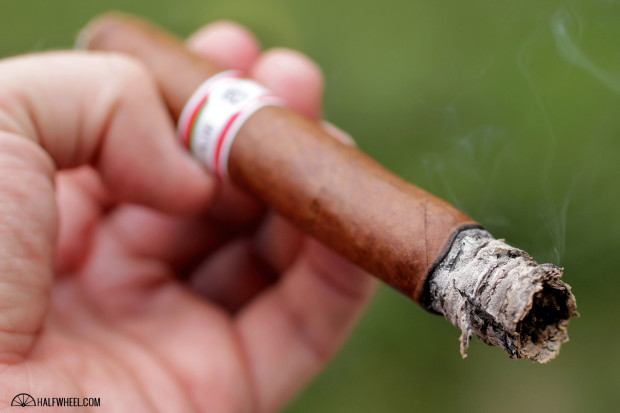 It’s said that the older you get, the more important each year becomes and therefore the more it should be celebrated. So seems the case with cigar retailer W. Curtis Draper in Washington, D.C.

The store hasn’t been shy about celebrating its anniversaries, commissioning limited edition store exclusives to celebrate over the past few years, including several from Tatuaje. Pete Johnson’s Cabaiguan WCD 120 was an incredibly well received cigar when it was released in 2007, trumped only by the WCD 120 Redux in 2012. This year, Johnson returned with another creation for the store’s 127th anniversary, the Tatuaje WCD 127.

The WCD 127 harkens back to another cigar that Johnson created for John Anderson and Matt Krim of W. Curtis Draper, a special size of the Seleccion de Cazador, or Brown Label, for Civil Cigar Lounge, the space owned by Anderson and Krim, as an exclusive release for their locker members. Johnson said that he “loves working with everyone at W. Curtis Draper,” adding that he is thrilled to be included on their short list of people making them cigars.

The list of manufacturers who have made cigars for the store is fairly small: beyond Tatuaje’s releases, the store has received cigars from Arturo Fuente, La Aurora and a Padrón—in both natural and maduro—for its 125th anniversary in 2012; La Aurora and My Father Cigars made the sticks for its 126th in 2013.

For its 127th anniversary, the Tatuaje WCD 127 is joined by the La Aurora WCD 127, a cigar otherwise known as the Guillermo León Family Reserve Ambassador. That cigar is scheduled to be released May 1 at the Washington, D.C. store and May 2 at the Bethesda location. In a size that seems somewhat foreign to Tatuaje, the WCD 127 is a sizable specimen and reminiscent of a Cuban Hoyo de Monterrey Corona Doble, with just a touch bigger ring gauge. Short of a visible seam, there isn’t anything to complain about visually. The most prominent vein is tucked away in the back and the wrapper has a good bit of small toothiness that contributes to a texture that is just the right bit away from being perfectly smooth. There is a little bit of uniform give to the cigar, and no bumps other than what the veins create. The pre-light aroma was decidedly different on each sample: one is on the milder side with notes of cake donut and wood crates and not an appreciable amount of pepper, one was particularly bright with a note of sweet hay, while the third had a bit more barnyard with a touch of thick syrupy sweetness and a faint hint of mint leaves. Air moves without problem on the cold draw with the pre-light impressions staying on the mild side, delivering notes of dry pretzel and some pretzel, though the mint note returned on the same cigar it appeared on the pre-light aroma.

While not packing a pepper-laden start, the Tatuaje WCD 127 isn’t shy about up-front flavor early, with a dry wood note backed by a touch of spice that tingles and envelopes the palate from almost the first puff. The first inch or so establishes the dry and somewhat spicy foundation, reinforced by the occasional retrohale that lights up the nostrils. It builds up to a profile of just more than medium before the smoke develops an almost fluffy base texture that seems to provide a bit of cushioning and almost indirectly mellows the cigar out just a touch. The ash holds on well and resists a bit of a shake at about two-thirds of an inch, the tightly pakced off-white ash shows just the slightest bit of flowering at the burn line, which is sharp and even. Smoke production is more than satisfactory, and the draw remains just the slightest bit firm. While the second third starts with a bit more chalkiness in the smoke that is even more discernable on the retrohale, there is another subtle shift in flavor that brings about more in the way of baking spices and creates a warmer, heartier smoke; an experience almost more akin to the baking process than the individual components and one that warrants slowing down just a bit to enjoy it to its fullest. A distinct pepper note starts to emerge from the soft texture of the smoke just ahead of the midpoint and creates a duality in the smoke’s flavor and texture: soft on the tongue but peppery on the senses, it’s almost misleading but with still favorable results. The pepper backs off a bit past the midpoint and the wood note comes back with a touch of dry earth and creates a flavor profile that is dry and zingy on the tongue and even a bit into the throat. The pepper notes return to some of its fullest levels yet in the final third and bring the Tatuaje WCD 127 closer to the full bodied billing that some might give it, though it is more this one particular component driving the billing as opposed to the overall flavor profile. Wood notes continue to drive the underlying notes and the fluffinesss of the smoke has retreated a bit. The draw and burn continue to be flawless, and the ash seems willing to hang on for longer than I’m willing to give it the opportunity to, being the nervous asher that I am known to be. In one sample the burn rate slowed down quite noticeably and solidified that this may be a bit too much cigar at times, though the other two samples would refute that idea. Just a bit of harshness creeps in at times during the final third though it isn’t unpleasant for an experienced palate and has been something almost savored in some of Tatuaje’s other releases. While not the most complex of Tatuaje's releases that I have ever smoked, the WCD 127 is a very enjoyable cigar, provided the size works for you. I would have loved to get more of the spicy baking note that I found early in the second third, though that's almost like asking for the crescendo to be played throughout the whole piece of music. While not an issue per se, the size does prevent a bit of limitation in that you have to carve out a good amount of time to enjoy this particular cigar, but should you have it, I don't think you'll be disappointed by it.