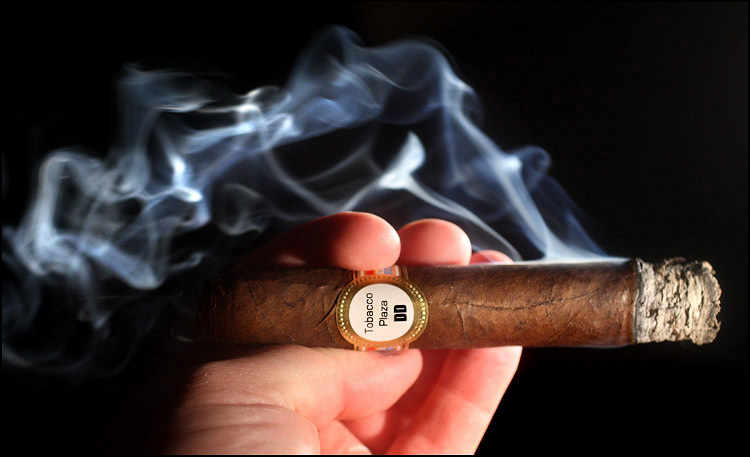 In late 2011, it became apparent that Tobacco Plaza of Great Neck, NY was slated for the next Tatuaje single store release. The cigar would be named the DD, an ode to owner Danny Ditkowich.

In late January, Charlie posted the details, which go as follows:

The cigar will be known as the Tatuaje Tobacco Plaza DD. Danny explains the project:

Working with Pete for over two years with this project. This is Tobacco Plaza’s 40(th) year in business and DD for my name. Pete said he would make a cigar for me. They call me Double D.

We will have a website up to take orders and there is a preferred list for Saints & Sinners members.

The Tatuaje Tobacco Plaza DD is based on the Fausto blend, which was based on the famed Tatuaje T110, but with a Connecticut Broadleaf wrapper. It will be a 6 x 58 Belicoso with a closed foot. As the pics show below, it’s a rather soft cone on the top of the cigar.

The blend is a play on Fausto with a (Connecticut Broadleaf) wrapper. It’s full but still easy to smoke.

There will be actually be two releases of the Tatuaje Tobacco Plaza DD:

The cigars were released last night at the dinner with Pete Johnson where guests also got to sample the Tatuaje Cojonu 2012 in both Capa Especial and Reserva forms.

Boxes of the Tatuaje Tobacco Plaza DD look like: *See info above about the two releases.

The Tatuaje Tobacco Plaza DD is a gorgeous cigar with a dark espresso brown wrapper that is rough to the touch. There are a few veins visible, but they are not overly distracting and in fact, they sort of add to the look of the cigar. It is an extremely large and dense cigar, very heavy when held in the hand. The cap is well made, and the Tatuaje covered foot is a nice touch that I really enjoy, both for ascetics and for the flavor. From the Connecticut Broadleaf, there are notes of earth, leather, black pepper and wood, a very strong aroma.

The first third of the Tatuaje Tobacco Plaza DD starts out with strong and immediate flavors of sweet tobacco, dark chocolate, leather and black pepper on the retrohale. There is an earthy grittiness that is pervasive throughout the first third and while there is some black pepper, there is almost no spice at all. The draw of the big Belicoso is a bit loose, but I am thinking it will tighten up. Great, strong start, I can feel the strength building already and it scares me a bit ending a strong medium already. Coming into the second third and the flavors are mellowing out a bit. They are not flat, just less intense than the first third. The main flavors are still much the same with a dark chocolate and espresso dominant, but also notes of leather, earth and just a tiny amount of a bitter fruit flavor. Still no spice at all from the Tatuaje DD and the black pepper was much reduced. However, the main change is the strength, which seems to increase tenfold with almost every puff until it is at a solid full by the end of the second third. It really snuck up on me, but is only getting stronger and I am starting to regret my choice of cigars to review at this point. The final third of the Tobacco Plaza DD is all about strength. The flavors don’t seem to change much, which is not a bad thing, but about halfway through the last third, I am really not feeling well. I did get an interesting sweet graham cracker flavor that lasted about seven puffs before I put it down, but I had to quit a bit before I wanted to in order to keep my dinner where it was. The Bottom Line: This is the strongest cigars I have smoked this year and easily one of the strongest Tatuajes that has been released. Stronger than the Fausto it is based on and on par with a fresh T110. I enjoyed the smoke, but had to take a break about two thirds into it or I would have thrown up. People who are looking for a nicotine fix are going to love this cigar and people who are not used to cigars this strong are going to puke. Honestly, the best part of this cigar for me was the first third, where the flavors were intense and the strength was about a full-like medium. After that, the strength took over and really fucked me up. Having said all of that, the flavors were classic Tatuaje with a small twist and the profile was surprisingly balanced, despite the strength. I am buying a couple of boxes to put down, but I think I will let them sit for a while as opposed to smoking them fresh.