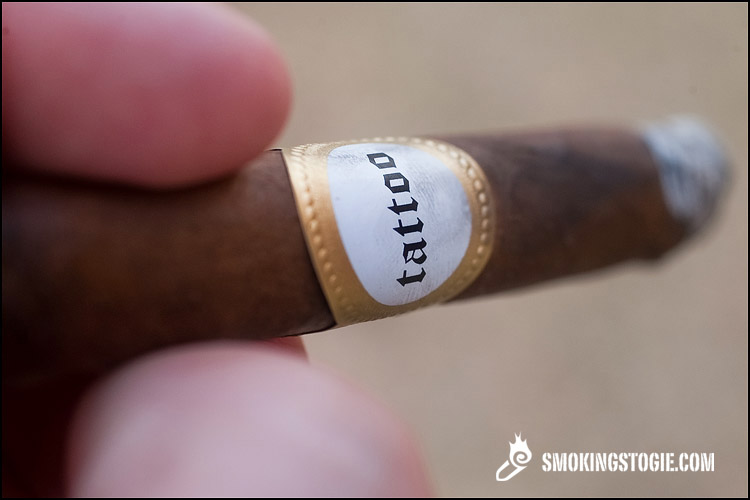 For one of the first times that I can remember, a limited edition Tatuaje cigar was released with almost no, as in, about 12 hours, notice or warning for most people.

At 5:39pm on March 17, Jose Agosto of Gloucester Cigars in Massachusetts tweeted the following:

“Be the first to try the new Tatuaje “Tattoo” cigar. Gloucester Street will be the first one in the country with this cigar. A boxpressed Lancero with broadleaf wrapper. The cigars come in bundles of 15. On sale tomorrow @ Gstreet. They are going for $149.99…Its a limited production cigar. Stay tuned for some pictures. That’s the way we ROLL!!!! Porkchop”

This was the first anyone outside of Pete Johnson and the people at Tatuaje, and a few others who had some prereleases, had heard of this Tattoo cigar. According to Johnson, he has been working on the idea for about eight months. The information came fast and furious after that—some of it wrong, like the initial indication that the wrapper was Connecticut broadleaf, a mistake from someone at Tatuaje who put that info out—and it was eventually known that Gloucester was going to be getting the first shipment that day for an event that Johnson was attending at the store.

Federal Cigar, which had released its Tatuaje 90th anniversary cigar last month, would also be receiving a large portion of the release the next day, which also coincided with their 90th Anniversary celebration, which Johnson was also attending. The rest of the cigars in the release are being sent in various amounts to the some of Tatuaje’s top accounts across the country and should be in stores this week.

There are 5,100 cigars total, and come in bundles and boxes of 15 cigars. Johnson has said that the “Tattoo” label will be released once a year, but will feature a different vitola and different blend every year. Also, in case you are unaware, Tatuaje is in a small legal battle with Cuban Crafters over the name “Tattoo.” So, Pete is now releasing a cigar with the name in order to try and have a better shot at proving his trademark case.

The cigar has no pigtail and comes with a Tatuaje Exclusive band like the Federal 90th band that says Tattoo. I made 5100 total. Originally they were going to come in boxes but only 100 boxes were finished so they are being sold in bundles of 15 to start. Each year I will be releasing a cigar with this band in small quantities just to protect the mark. The first thing you notice about the cigar is the vitola. A box-pressed lancero is an interesting site to behold, and hold, and I spent a few moments just looking at it. The wrapper is a great milk chocolate brown and smells strongly of leather, espresso, hay, and a slightly sour note. The Tattoo is extremely spongy when squeezed, which is not unusual for the Lancero vitola, and the wrapper, while dry, is velvety smooth to the touch. There is a great triple cap as well, which is nice to see. The pre-draw brings notes of sweet hay, cedar and just a bit of a sour note.

The first third has a bit of spice to start, but the main flavor is a very interesting, and strong, note of dry coca powder, not sweet, but slightly bitter and sour. Also noticeable are notes of leather, wood and espresso. The spice that was present in the very beginning fades throughout the first third until it is almost gone.

The second third had almost no spice or pepper at all. The profile has turned much more oak-like. Cocoa from the first third is still hanging around, but much reduced, also around are notes of hay and just a bit of sweetness.

The final third just falls apart flavor-wise. The Tattoo turns very mellow and bland. The flavors are still around, just much less distinct and balanced. No spice or pepper, no sweetness, just blandness. This continues until the end of the cigar. Update: I was apparently incorrect in my assessment that this was a “rushed” cigar, as I mentioned in the review, and has since been corrected, as Johnson told me after the review was published that he had been thinking about and working on this release for about eights months. Having said that, I stand by my review. The flavors were just not there (for me), and that is the bottom line.

Honestly, this is really not one of Tatuaje's best efforts. While the beginning had an interesting combination of flavors, the profile really fell apart after that. While not a bad cigar by any means, it's totally smokable and an interesting vitola for sure, this is one release you can easily save your time, money and effort on tracking down while not missing much.