As you may have read on this site by now, Tatuaje released the Reserva Broadleaf Collection during the 2016 IPCPR Convention & Trade Show, an enormous 100-count box containing a Connecticut broadleaf-wrapped version of 10 previously released vitolas in the company’s Seleccion de Cazador line that retails for an astounding $1,200.

I explained the background of the release in my review of the Havana Cazadores Reserva Broadleaf last week:

The collection incorporates 10 cigars from “Brown Label” line: the six HUNTER sizes, the recently released K222, the Reserva SW, the Reserva J21 and the Cojonu 2003 Reserva. There are 10 cigars of each release included in the box with each blend carrying the same MSRP as its original counterpart. Originally, the plan was to release 5,000 boxes—or 500,000 total cigars—but that changed in February, when Tatuaje announced it would be drastically cutting the number of the larger boxes in order to sell 10-count boxes that each contain the same 10 Connecticut broadleaf-wrapped cigars. 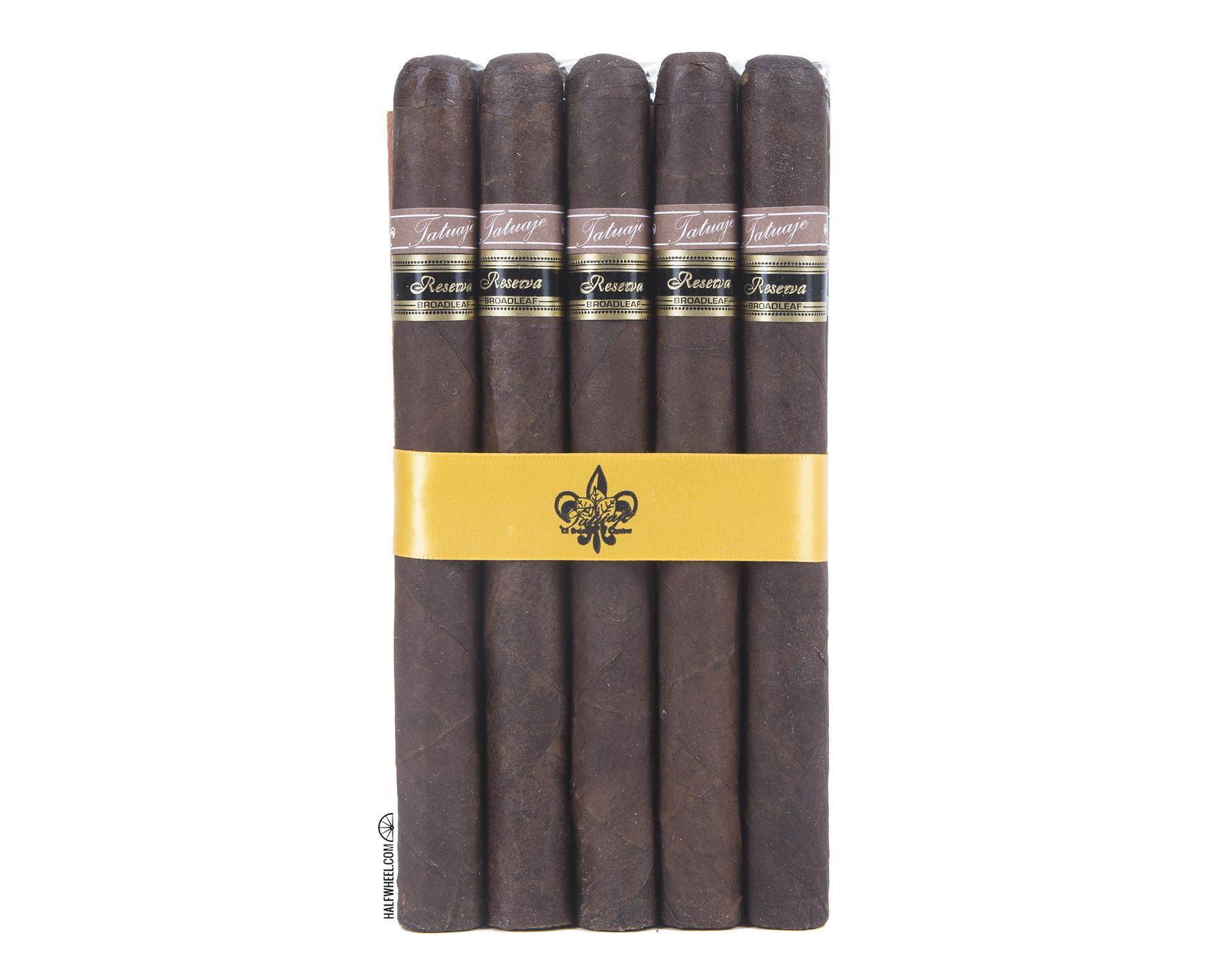 The original Brown Label line includes six different classic Cuban vitola names whose first letters spell out HUNTER, which is the name of Tatuaje owner Pete Johnson’s dog that passed away in 2003: Havana Cazadores, Unicos, Noellas, Tainos, Especiales and Regios. In addition, an addition to the line, the K222, was named after Kona, another of Johnson’s dogs named that passed away in 2015. 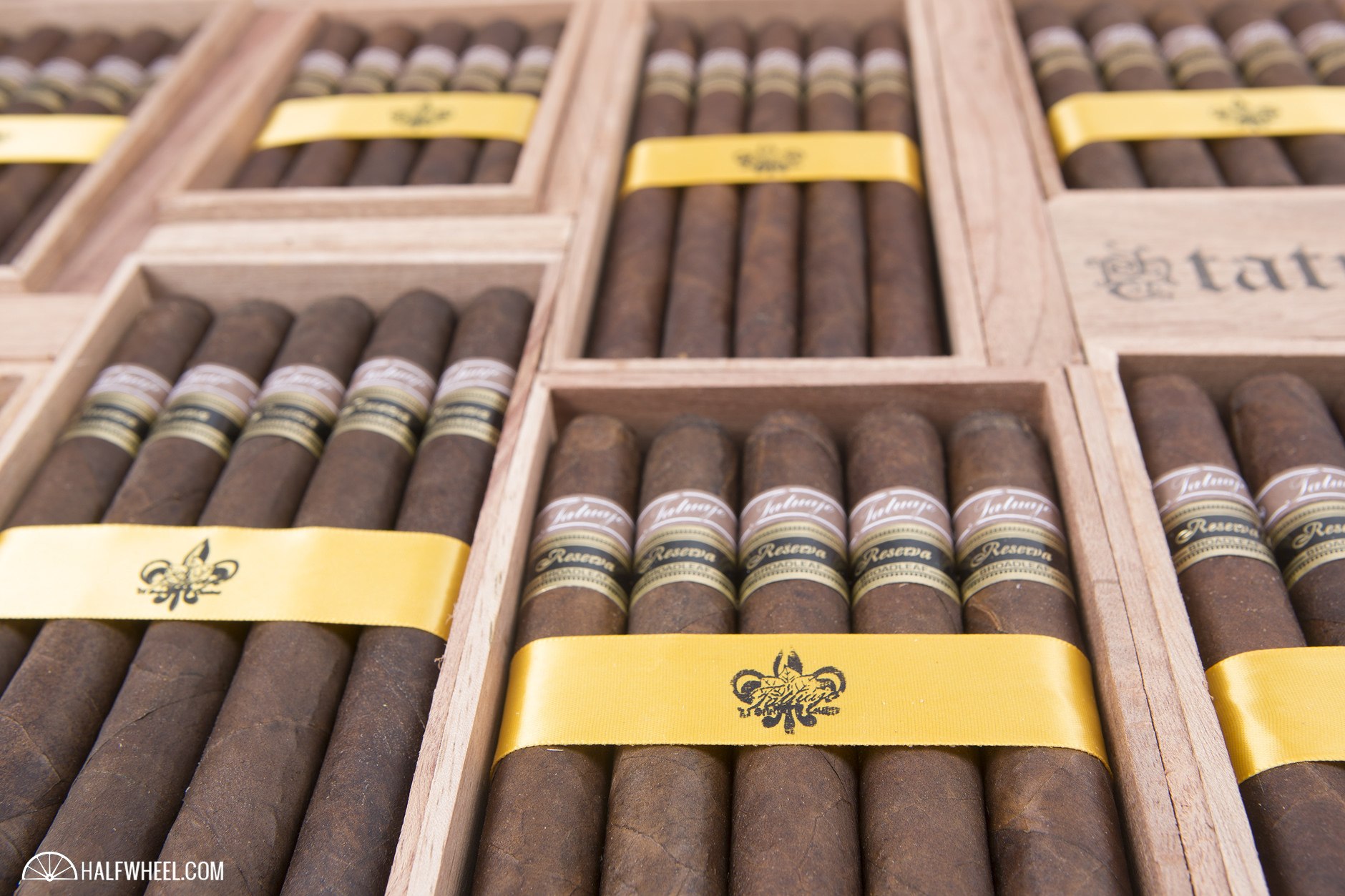 The cigars included in the Tatuaje Reserva Broadleaf Collection are: 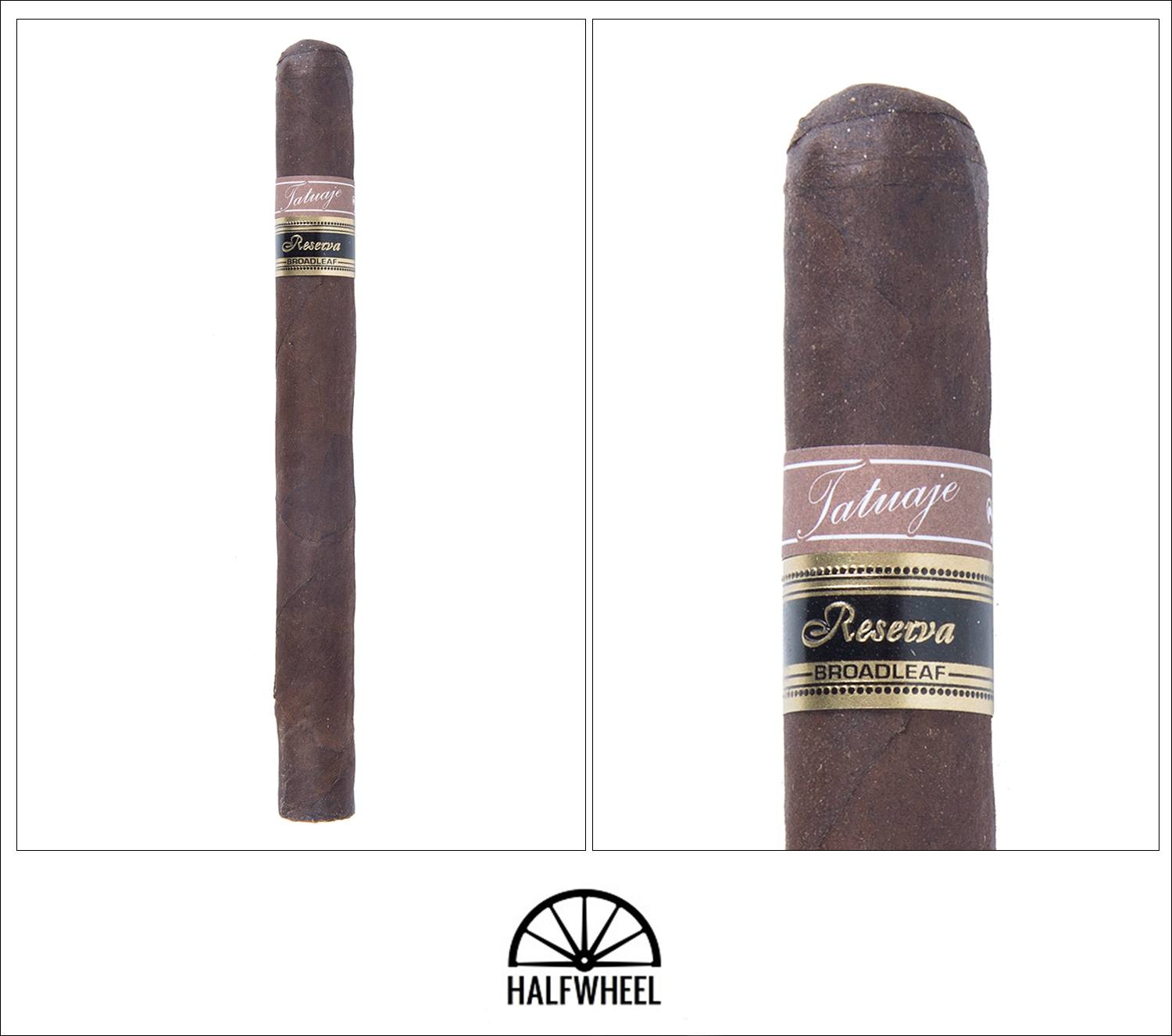 Covered in a dark reddish brown wrapper, the Tatuaje Tainos Reserva Broadleaf is fairly rough to the touch and features a couple of major veins and very little oil is present. There is a small soft spot that I can feel about halfway between the foot and the band. Aroma from the wrapper is a combination of faint barnyard, leather, earth, cedar and indeterminate sweetness, while the cold draw brings flavors of earth, leather, black pepper, tobacco, creamy oak and a bit of pomegranate sweetness.

The first third of the Tatuaje Tainos Reserva Broadleaf features a strong leather note along with lesser notes of barnyard gritty earth, espresso beans, oatmeal, leather and peanut shells. There is a distinct floral note along with some significant black pepper on the retrohale from the start that continues into the first third, but very little sweetness on either the retrohale or finish so far. Construction-wise, the burn is a bit wavy, forcing me to touch it up a couple of times and the draw is a bit loose for my tastes, though well within normal limits. The smoke production is both dense and copious, while the overall strength hits close to medium by the time the first third comes to an end. 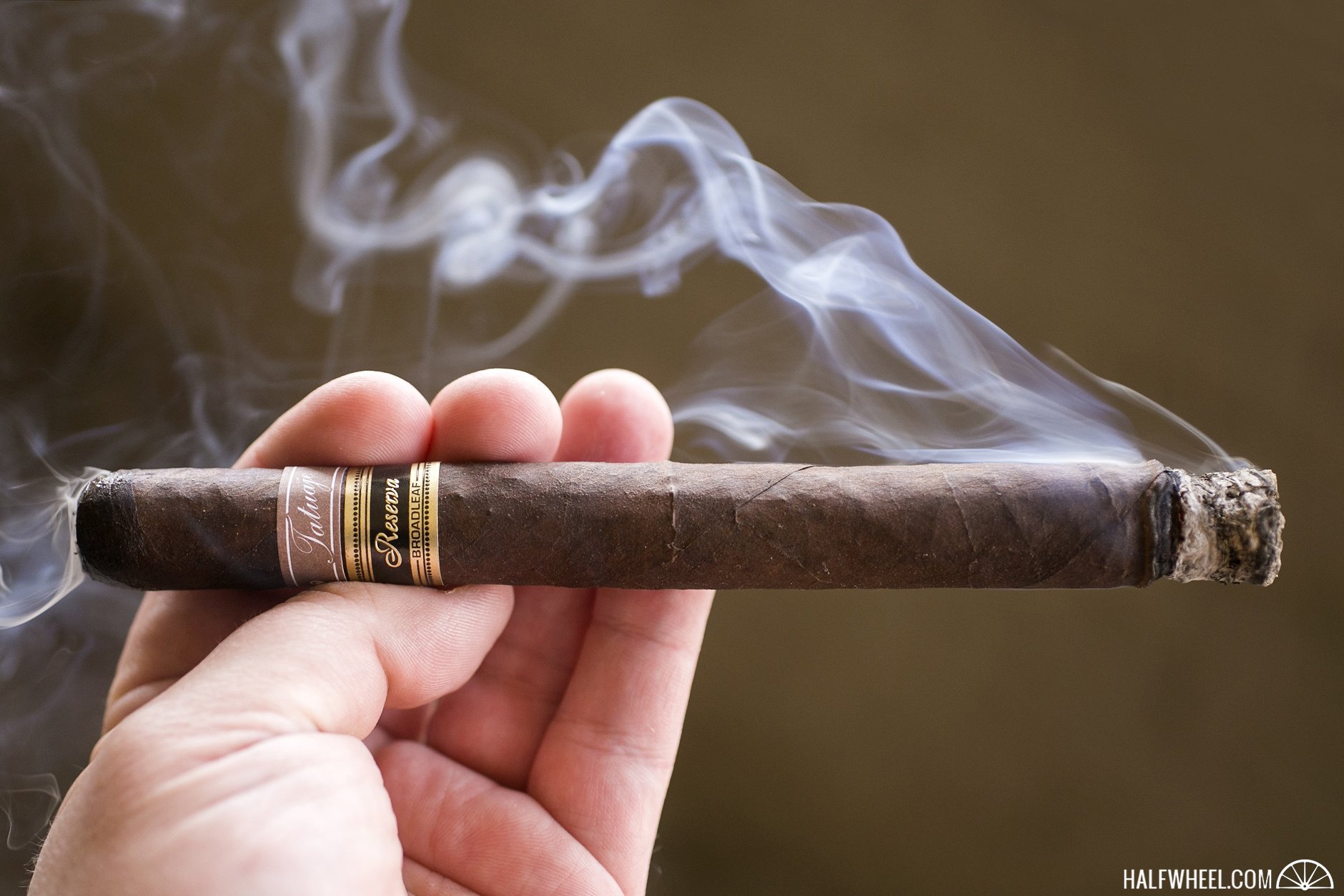 While the dominant flavor in the Tainos shifts during the second third from the leather note to a strong cinnamon and earth combination, there are other flavors as well, including dark chocolate, earth, hay, wheat, sawdust and popcorn. In addition, a faint vanilla sweetness replaces the floral on the retrohale, and the black pepper on the retrohale has been reduced by half. Thankfully, both the burn and draw are significantly improved, with the burn evening up and the draw tightening up nicely. The strength easily hits the medium mark by the halfway point and seems to be still increasing, albeit much more slowly. The Tatuaje Tainos Reserva Broadleaf is much like the second third and that is not a necessarily a bad thing. The dominant flavor remains a distinct cinnamon and earth combination, but the vanilla sweetness has bumped up a notch, affecting the profile in a positive way. Other notes of cocoa nibs, leather, hay, espresso beans and cedar flit in and out, and there is still a nice amount of black pepper on the retrohale, albeit much less than the first third. After a somewhat rough start, both the burn and the draw continue to impress, and the smoke production remains quite high. The strength does get a bit higher, but stalls out just above the medium mark by the time I put the nub down with a little more than an inch to go. 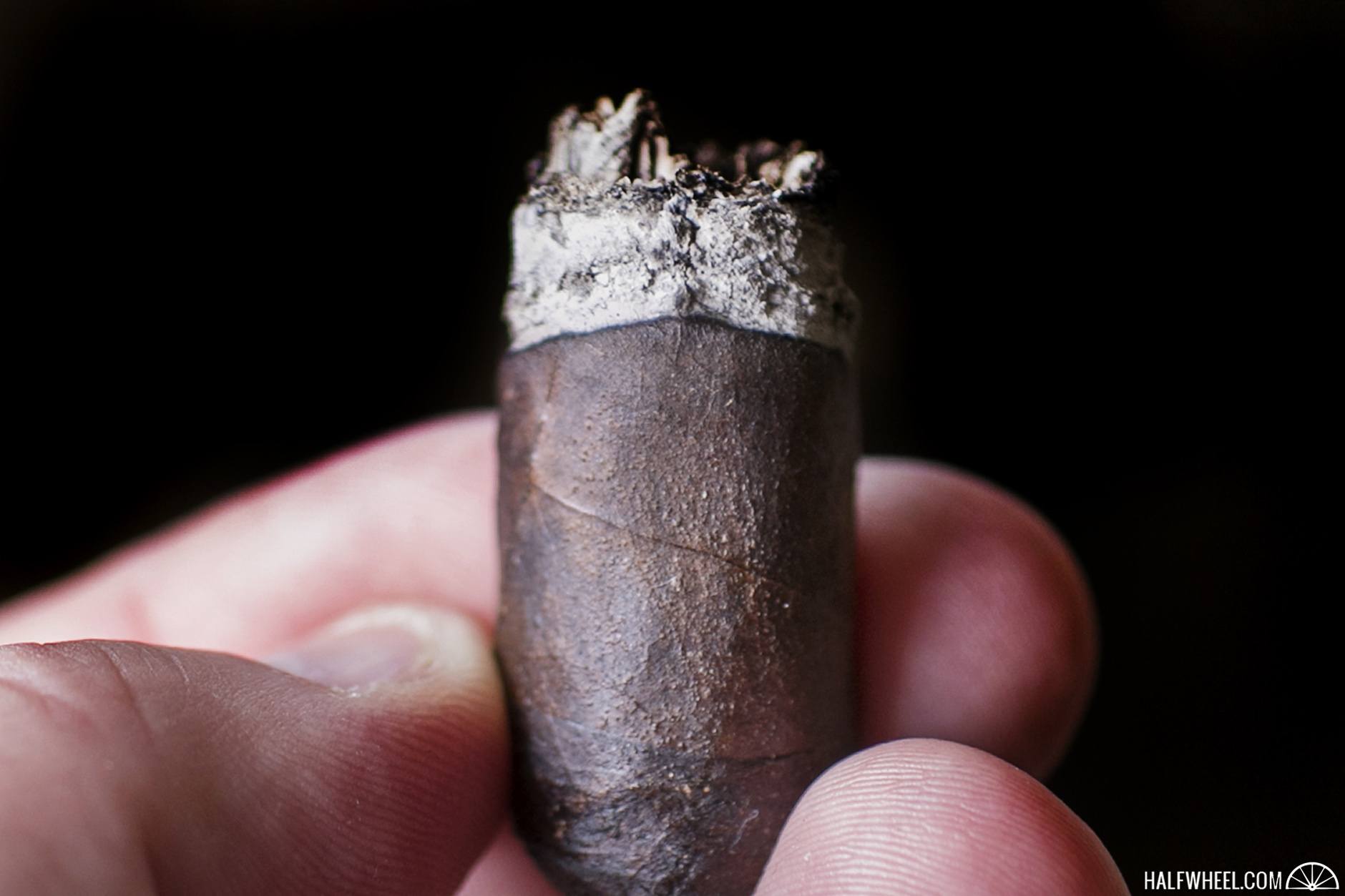