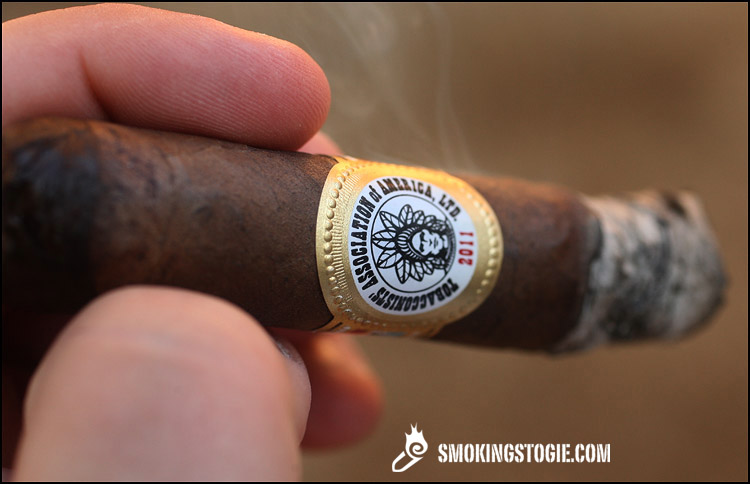 In March of 2011, the Tobacconists’ Association of America held its yearly convention in Cabo San Lucas, where it was announced that Tatuaje would be producing a limited production cigar that would be sold only at the stores of the TAA members who attended the convention and signed up for it.

Says Pete Johnson about the cigar:

This (cigar) is only for members that visited the show and will stay that way every year. The blend is going to be similar to the styles of Brex and Tenderloin but with a cool twist. The size that was being tossed around was 5 5/8 x 54. I’m gonna play with the blend this week in Nica. Luckily the TAA had about 40 retailers sign up so it should be pretty easy to get. This will be a one time production and next year we will create another cigar (in a different blend and size) for the TAA at the show.

There are 1,500 boxes of 20 cigars split between about 40 different retailers who were at the show. Like the Tatuaje Black Label Petite Lancero, the cigars are wet-packed in foil. Here is the TAA (bottom) compared to the Barclay Rex (middle) and the Pork Tenderloin (top):

And here is a list of the TAA stores that will have the Tatuaje blend for sale: The cigar itself is a wonderful looking stick, slightly box pressed. Honestly, it’s more oval than anything with a cinnamon brown wrapper that is rough to the touch. The cigar has a closed foot and is nicely hard when squeezed with just a little give. It smells sweet with notes of wood, chocolate and earth.

The first third starts out with a great amount of spice and black pepper. Not overwhelming, but definitely in the profile. Flavors of earth, espresso, leather and wood all combine for a wonderful beginning. There is a sweetness in the profile as well, but at this point, it is just a general sweetness—not a specific flavor that I could discern. The second third mellows out a bit—very little spice or pepper even on the retrohale. The flavors are pretty much the same, although the sweetness is quite a bit more pronounced, a wonderful rich note of sweet earth and leather.

The final third remains much the same as the second third, same basic flavors, but there was a bit more spice on the lips and I noticed a distinct chocolate flavor on the finish. The black pepper was gone completely, however, a nice ending and it never got hot at the end, and easy to finish. When Pete mentioned that the blend was "similar to the styles of Barclay Rex and Tenderloin," I—along with every one else—started salivating like one of Pavlov's dogs. So, the biggest question on everyone's mind is most likely: Does this taste anything like the Pork Tenderloin or Barclay Rex? The answer is: sort of. There are definitely some similarities, but in my opinion, the TAA is not as full bodied as either of them. It is also closer to the Pork Tenderloin in mouth feel and closer to the Barclay Rex in profile with the noticeable sweetness and less spice, but is not quite as complex or as balanced as either of the other two. Good enough to buy a box to put down, for sure.