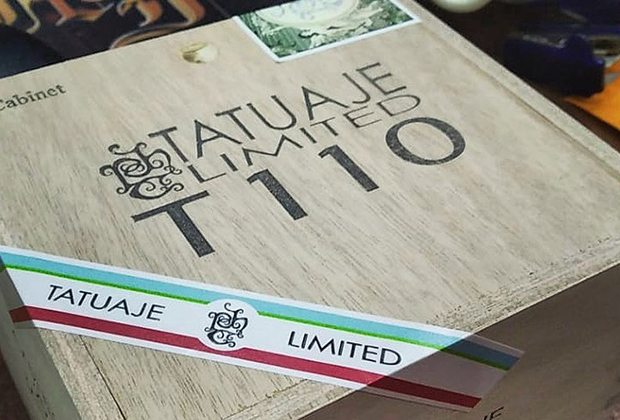 In late November 2020, Pete Johnson teased the return of the T110, one of his most iconic cigars. Now, the cigar is nearly ready for release as a limited edition redux.

Via his social media channels, Johnson announced that in about two weeks, the cigar will be returning to R. Field Wine Co. in Honolulu, Hawaii. Pricing is still being finalized, but he said he is hoping to keep it at the same MSRP of $10 when it was released 12 years ago.

A total of 1,000 boxes of 25 cigars are being produced, 400 of which are going to R. Field Wine Co. and will be marked specifically with their cliche. The remaining 600 boxes will ship to other retailers around the country in mid-May and will not feature the R. Field Wine Co. cliche. The cigar itself is a 4 3/8 x 52 short robusto that uses an Ecuadorian habano wrapper over Nicaraguan binders and fillers.

The Tatuaje T110 dates back to 2005, when Johnson created an unreleased cigar called Thermonuclear, which gained a reputation for being an all-ligero cigar that was designed to be strong. While that cigar never came out, Tatuaje released a smaller version of the blend as an exclusive for R. Field Wine Co. The T in the name was an abbreviation for thermonuclear, while 110 referenced the cigar’s length in millimeters. It has been referred to as an all-ligero creation, with the Nicaraguan tobaccos coming from Jalapa and Estelí. However, Johnson said that he never marketed it as such, noting that it does use high priming tobacco, including visos as well as ligeros.

Just 200 boxes of 25 cigars were produced and it became one of the more sought-after cigars for Tatuaje fans.

From that original cigar, a 4 1/3 x 52 petit robusto, Tatuaje would create its Fausto line, which debuted in the summer of 2011 and is known for being on the fuller, stronger end of both the cigar spectrum and Tatuaje’s portfolio. It also resulted in Avion, which was an extension to the Fausto line by way of three new sizes released one per year from 2011-13. Both of those lines use Ecuadorian wrappers over Nicaraguan binders and fillers.

The cigars are made at the My Father Cigars S.A. factory in Estelí, Nicaragua.

Shortly after this article was published, the blend information was updated to indicate that it’s not made of only ligero tobacco, but contains visos as well.