When Pete Johnson of Tatuaje announced that the Tatuaje T110—one of the more sought-after cigars from he company’s history—would be returning as a limited edition redux, it certainly captured the attention of many of the brand’s fans. Then about six months after the first teasing of the news and about three months after the plans for the cigar’s release firmed up, Johnson sprung another surprise, announcing that he would be releasing two new variations on the T110.

Those are the T110 Capa Especial—or what you might refer to as the T110 Sumatra—and the T110 Reserva. After the initial excitement of the news seemed to settle down, it was a reminder that Johnson was returning to not just a classic cigar from his portfolio, but a technique he’s used of using a trio of wrappers on some of his projects, and one that might be utilized more in the future.

After talking with Johnson about his plans for these two new offshoots, it reminded me of a project he did back in 2012 with the Tatuaje Cojonu 2012, releasing the cigar in a book format of 24 cigars, 12 of which used the Capa Especial, or Sumatra wrapper, while the other 12 used a Connecticut broadleaf wrapper. Then it reminded me of the Tatuaje Broadleaf Collection that was released in February 2017, where Johnson selected 10 cigars from the company’s Brown Label portfolio and gave them the broadleaf treatment. Then it reminded me of a conversation I had with Johnson that this might be his approach to new releases for the foreseeable future: bringing back iconic cigars with their original specs and then giving them the two other wrappers. What that means for the T110 is that it gets a Connecticut broadleaf wrapper instead of the original T110’s Ecuadorian habano wrapper, while using the same Nicaraguan binders and fillers. It’s also a 4 3/8 x 52 short robusto and offered in 25-count boxes, though there were 2,400 boxes of both the Broadleaf and Capa Especial versions produced, as opposed to just 1,000 of the T110 habano version. It will also be the last time that the T110 is seen for three to five years, as the trio is all part of the Tatuaje Limited Series, a group of cigars that Johnson has said he will rotate in and out between production runs. There isn’t a lot about the Tatuaje T110 Reserva that stands out visually—something I say with no disrespect but rather a compliment to a good-looking cigar—though other than that for some reason the combination of its length and ring gauge make it feel like a cut-down Churchill as opposed to a petit robusto. As expected with a Connecticut broadleaf wrapper, the top leaf is a very dark brown color with a toothy texture and few if any noticeable veins, but the one or two that do catch my eye are on the wavy side. With a light touch the cigars feel dry with a bit of small velvet texture, with a more intentioned touch I can feel a bit of oil in the leaf. The cigars are rolled firmly but short of having no give; I’m sure I could get more out of the latter but I see no reason to as it feels plenty filled. The foot offers an earthy aroma that reminds me of walking through the potting soil aisle at a nursery; an almost surprisingly singular aroma save for the variety of options aspect, as I don’t get much in the way of sweetness or pepper. Once sample has a bit of brownie batter and pepper, which helps with complexity. The cold draw is just a touch open on the first sample, with a flavor that holds onto some of the earthiness while introducing a supporting flavor that reminds me of kettle cooked potato chips. The second and third samples’ draw is just fine, and nothing about any of them has me concerned.

While the Tatuaje T110 Reserva starts off with an expected rich earthiness and some pepper, there is also an interesting tanginess, almost juicy on the tongue while a bit of black pepper does some tingling of the taste buds. There’s some burnt steak ends as well, a combination that carries the cigar for a bit until pepper and the Connecticut terroir push forward and deliver what I would say is the familiar profile of cigars that use Connecticut broadleaf wrappers. Not long after that flavor takes over the palate, it begins making its way to the nose as well, which offers quite full-bodied and peppery retrohales, as well as some potent ambient smoke if you’re not a fan of that process. At some point in the first third, whatever the funkiness was at the onset goes away and reveals a very enjoyable flavor of rich earthiness, some concentrated cola syrup, a bit of black pepper and plenty of terroir. The earth lightens up just a bit at the end of the first third, but the flavor is still big and pretty dynamic. Construction is very good, there’s plenty of smoke and no issues with combustion. Other than the first puffs, the first third of the Tatuaje T110 Reserva is close to if not outright full, while body and strength are right behind it. 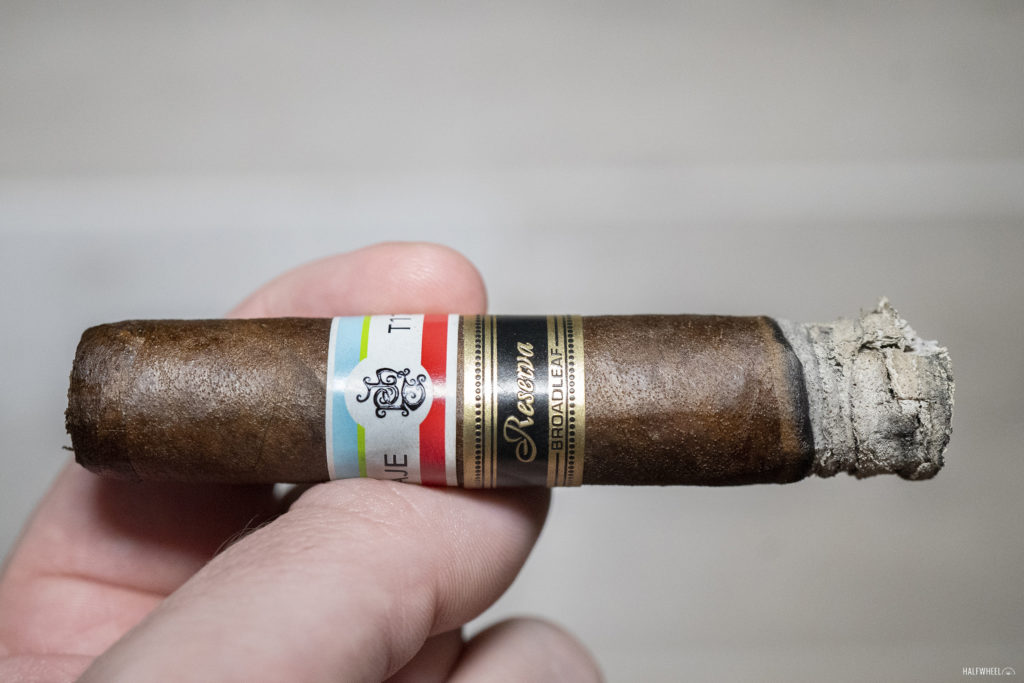 After starting off with a slightly lighter profile, the second third continues to slowly develop the earthiness of the profile, thickening the smoke and adding a bit of chocolate by way of a thick and chewy brownie note. On the exhale and finish, the cigar now shows more robustness by way of a lingering black pepper and some light rockiness in the earth. That transfers to retrohales as well, but it stays lighter than what the profile gets, even as the profile returns to a fuller expression. There’s also a flavor and aroma that emerges and both catches my attention while confounding my memory and ability to put a name to it. There’s something that makes me think of the sourdough bread note usually found in Connecticut shade tobacco, though that doesn’t seem quite right. There are also some traces of creaminess emerging, a very subtle flavor but one that both counters and complements the previous flavors quite well. During the first sample, I step away from the cigar for a moment as this section comes to a close and notice a rather robust flavor still lingering on my palate, imparting a mix of black pepper, charred wood, finished charcoal grill and general smokiness on my palate. Flavor and body are between medium-plus and medium-full for this section, while strength is closer to medium but still noticeable. Construction is still very good and problem-free. The robustness that had been part of the finish in the second third has moved into the lead role at the final third gets underway, and in a few puffs the sourdough-like flavor returns as well. The Tatuaje T110 Reserva also begins to show its first struggles with combustion, something that feels like the cigar may be holding onto a bit of excess of humidity from the rolling process. It’s also something that is consistent across all three samples, reinforcing my suspicions and unfortunately taking my attention away from the flavor. When I can get a couple focused puffs out of the cigar, I notice that the pepper is quite forward in the profile and fairly sharp on my tongue and lips, more so than I remember at any point thus far. The earthiness of the profile has dialed itself back a bit, leaving the flavor a bit drier and more vibrant. The same unidentified flavor from the first third and sporadic points thereafter returns, and it has me wishing for the rich earth and chocolate from earlier. That quasi-sourdough flavor and more pepper finishes out the cigar, a vibrant and lively flavor that puts the cigar back into medium-full to full territory. Body stays medium-plus and strength has crept up to medium-plus, though I find myself focusing more on the lingering tingle of the finish than any nicotine strength. Other than the combustion issues in this third, the cigar performs pretty well, with decent smoke production and an even burn line. I was undoubtedly intrigued by the return of the T110, and the two variations certainly were intriguing enough on their own, let alone as part of the T110 trio. I've had the chance to smoke all three of the T110s, and much like with other cigars in the Tatuaje portfolio that use the three wrappers, the broadleaf wrapper is either its biggest strength or its biggest detractor. At its best, the T110 Reserva was the richest of the three for my palate, while also being the funkiest of the three when things aren't at their best. It's something I've noticed elsewhere, and leads me to wonder just what causes the variance of the broadleaf that is being used for these cigars. I would certainly still recommend trying the Tatuaje T110 Reserva if you have or can get some, but I would do so with a word of caution that I think you need to smoke a few of them to find all that the blend has to offer, and in doing so, you may just find one reasons why the T110 Reserva falls short of the other two.