While I couldn’t tell you exactly when it happened, Tatuaje’s portfolio got so big that I pretty much gave up any attempt to keep track of it in my head. Between all the brands that were being launched and all the sizes within said brands, it became a nearly futile exercise for someone to commit to memory.

One of the ways that Pete Johnson has grown his portfolio is not just through the release of new blends, such as the Reserva Broadleaf Collection, but through new sizes. The Monster Series begot Skinny, Short, and Pudgy Monsters, and in the case of the Reserva SW, it was the basis for the Reserva SW Short, which debuted in May at Fujioka’s Wine Times in Honolulu, Hawaii.

The Reserva SW Short uses the same blend as the original SW, with an Ecuadorian habano rosado claro wrapper over a Nicaraguan binder and filler. It also keeps the same 47 ring gauge that is the standard thickness for a Churchill vitola, but knocks off 2 1/4 inches, shrinking the original’s 7 inches in length down to 4 3/4 inches.

Additionally, while it’s an ongoing offering, production will be limited, according to Pete Johnson, so expect to see it on shelves only as production capacity at the El Rey de los Habano factory allows. The wrapper seems to be on the lighter side of the spectrum for what I expect from a Tatuaje brown label, though that is simply my memory talking. One sample has an interesting mottling on it, with dark spots clustered together like a leopard’s spots. Otherwise, it’s a fairly uniform color with small veins, the occasional water spot and a smooth, slightly oily texture in the fingers. The roll generates flat, nearly invisible seams and while each sample has a bit of give, they are all generally on the firm side. The foot offers almost no aroma whatsoever on the first sample, other than just a bit of sweet dough. The second is more vibrant with more of the dough and a bit of apricot and dried mango, while the third has some mild fruit sweetness along with the first touches of pepper. The cold draw is just a bit firm and almost equally as nondescript, though I do pick up a bit of Cheerios-like cereal grain and a bit of wheat on the first sample, with a more fruit-leaning flavor in the second and third.

The opening puffs of the Tatuaje Reserva SW Short deliver a middle-of-the-spectrum profile in terms of body and strength, with flavors of mixed nuts, some black pepper and dry pretzel the first things that stand out across all three, while the third adds a dry, woody flavor as well. The cigar toys with those notes for the bulk of the first third, occasionally varying the intensity but never adding or removing any of the specific components. There’s some building of the pepper through the first inch, though it’s far from overpowering or even dominant in the profile, which sits at medium to medium-plus for flavor intensity and medium for strength. The draw and burn have both been quite good through the first inch and a half. 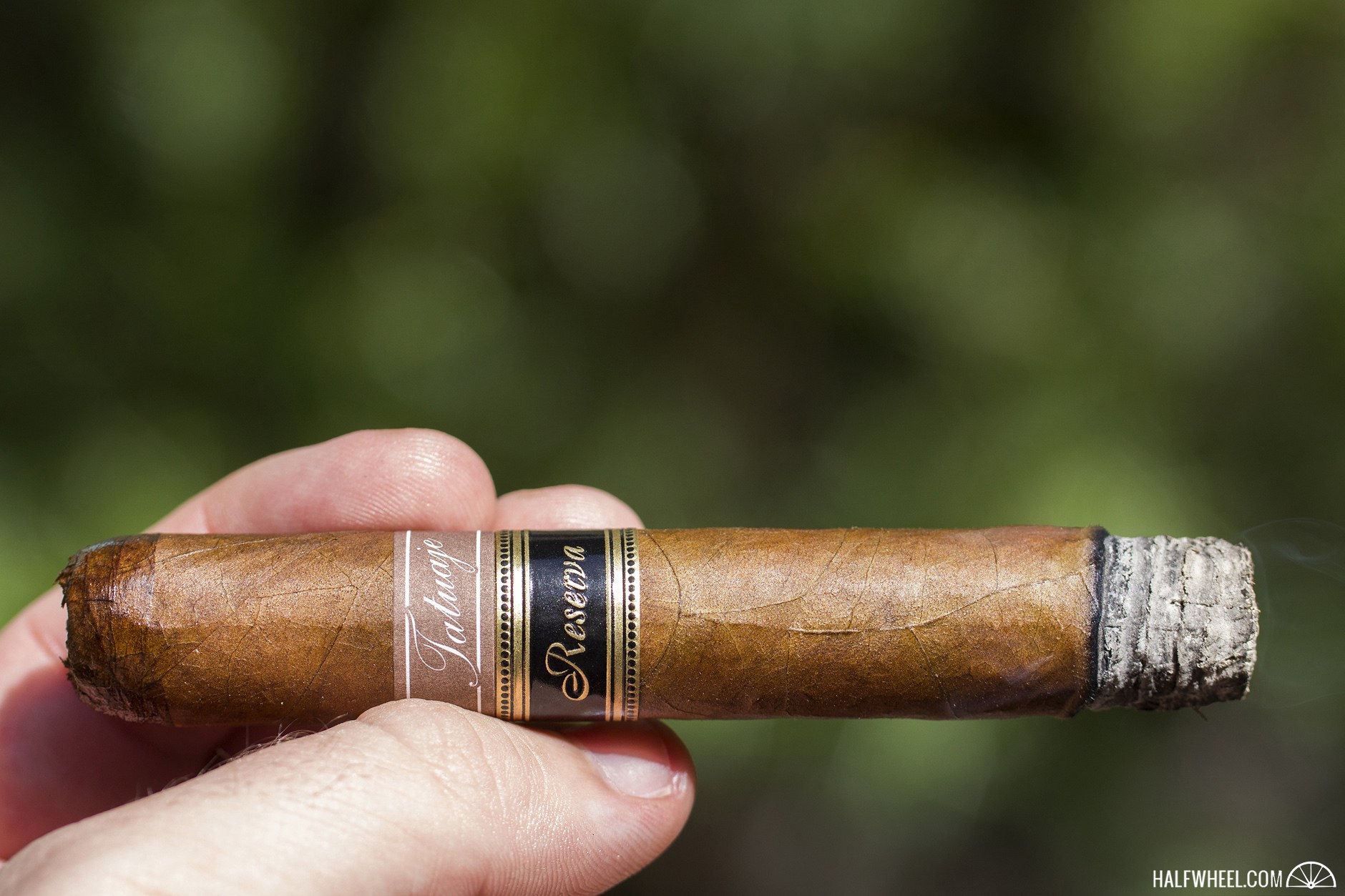 Once the first clump of ash needs to come off, the Tatuaje Reserva SW Short is just about to reach its second third and with it comes a good bit more pepper through the nose. The palate gets a bit more as well, but it still seems fairly limited, even before a head-to-head comparison to the retrohale. The profile is a touch more smoky and woody as well, with the second sample contributing an interesting doughiness that seems a bit out of place given the rest of the profile. The third sample gets a bit of condensed milk creaminess, which I find quite enjoyable and helpful to maintain balance and develop complexity. Puffs just past the midpoint get the addition of a bit of metallic earthiness, which colors the flavor, but it doesn’t hang around overly long. The technical performance remains very solid as it becomes time to take the bands off of the cigar. The Tatuaje Reserva SW Short’s final third opens up with a very subtle earthiness that reminds me of black coffee, though the pepper dashes that thought as it settles into the tongue and completely dashes it with a retrohale. There’s also a bit of a warm peanut flavor that appears in short spurts. While it was fleeting, I find myself missing the creaminess and sweetness I found a bit earlier, as that seems to be about the only thing the cigar is lacking in terms of flavor or complexity, but instead it moves more towards a pepper-forward profile, digging into its Nicaraguan core for earth and pepper, while the Ecuadorian habano wrapper seems to be on the bolder side of the spectrum, or at least acts like it in this section. There is a bit more heat and char on the pepper that develops with about two inches to go, and it seems the best course of action is to space out my puffs in order to counteract that. The final puffs get a bit more earthy and robust, and I detect the beginnings of a bit of harshness, which I certainly hope is fleeting as the cigar has been quite good to this point but ultimately is the signal to wrap things up, with an even burn line, plenty of smoke production and a near perfect draw closing things out. While it's been some time since I last smoked the full-sized Tatuaje Reserva SW, I have fond memories of it, though a bit too sparse in cohesiveness to do a direct comparison to this shorter version. What I can say is that even at a two-plus inch deficit, the Tatuaje Reserva SW Short shows it can still deliver a good bit of depth, transition and progression, even if the last of those three descriptors isn't immediately obvious while smoking the cigar. It's a cigar that starts surprisingly restrained before steadily opening up into passing notes of sweetness and earthiness, each complemented by growing amounts of pepper and a robust finish. It also fills a longer portion of time than you might expect, which helps ease what could be seen as a higher-than-average price for the size. I still think that if time allows, the original version with its longer length is the better choice, but this shorter version is nothing to overlook in the Tatuaje portfolio.