There are many Tatuaje releases with interesting backstories, but the Tatuaje SW Reserva Maduro is one of the most personal.

Originally released in March 2009, the 7 x 47 churchill was produced to commemorate Paul Hernandez, a good friend of Tatuaje owner Pete Johnson who served as an independent sales representative for a few companies including Tatuaje. Paul had asked Pete to roll a few of his popular SW blend with a Connecticut broadleaf maduro wrapper for him to smoke, since it was one of his favorite vitolas. Pete did so, but unfortunately, Paul passed away soon after. In his memory, Pete had 5,000 cigars packaged in 25-count boxes of the same blend made and sold them exclusively through one store, Sabor Havana Cigars in Florida. In addition, Johnson donated all of the proceeds from the sale of the cigars to Paul’s family. 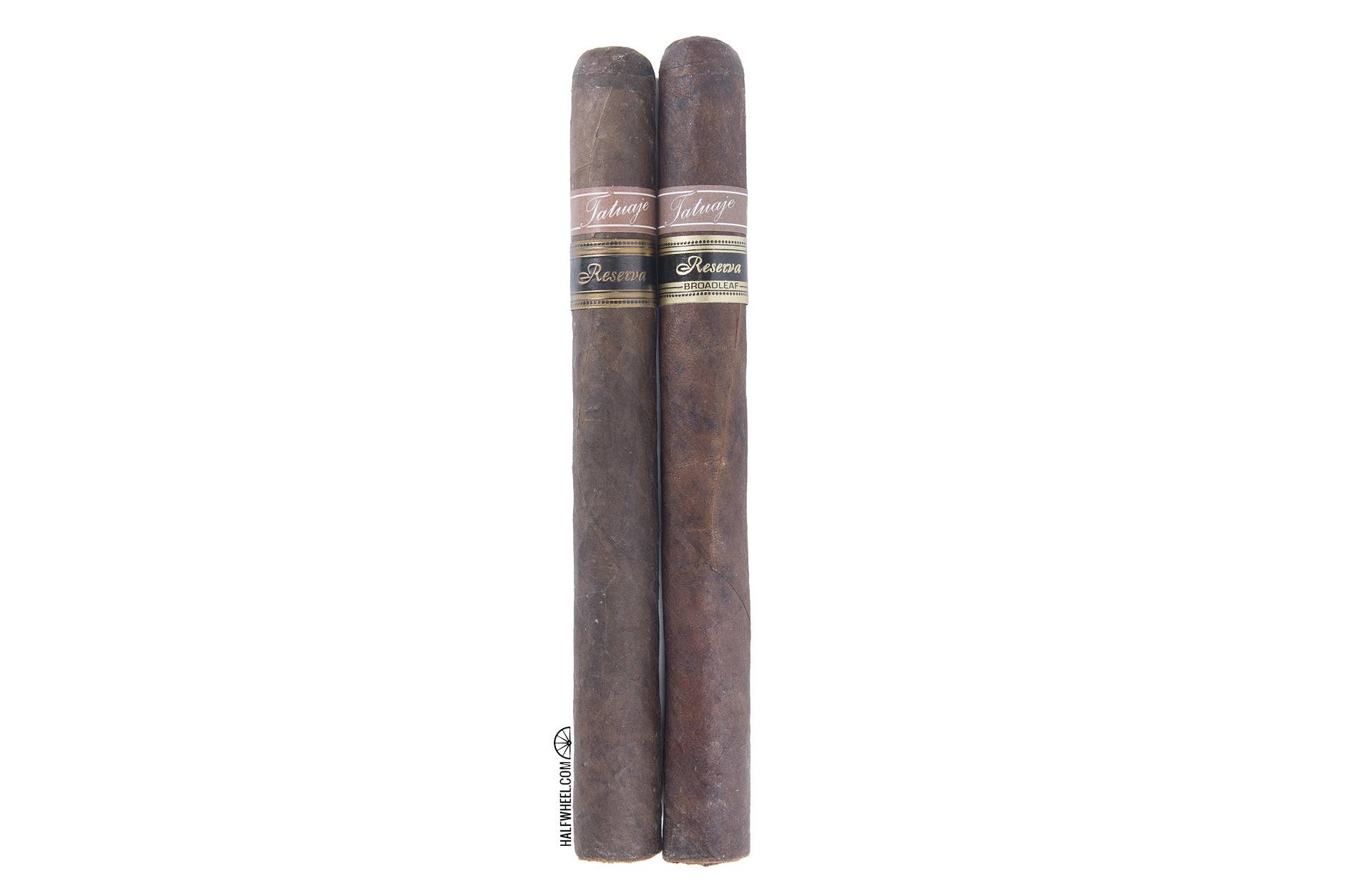 For the Reserva Broadleaf Collection version, the cigar is covered in a Connecticut broadleaf wrapper, while the internal tobacco in the binder and filler are both from Nicaragua. It is part of Tatuaje’s Reserva Broadleaf Collection, a massive 100-count box containing a Connecticut broadleaf-wrapped version of 10 previously released vitolas in the company’s Seleccion de Cazador line that retails for a whopping $1,200.

The collection incorporates 10 cigars from the “Brown Label” line: the six HUNTER sizes, the recently released K222, the Reserva SW, the Reserva J21 and the Cojonu 2003 Reserva. There are 10 cigars of each release included in the box with each blend carrying the same MSRP as its original counterpart. 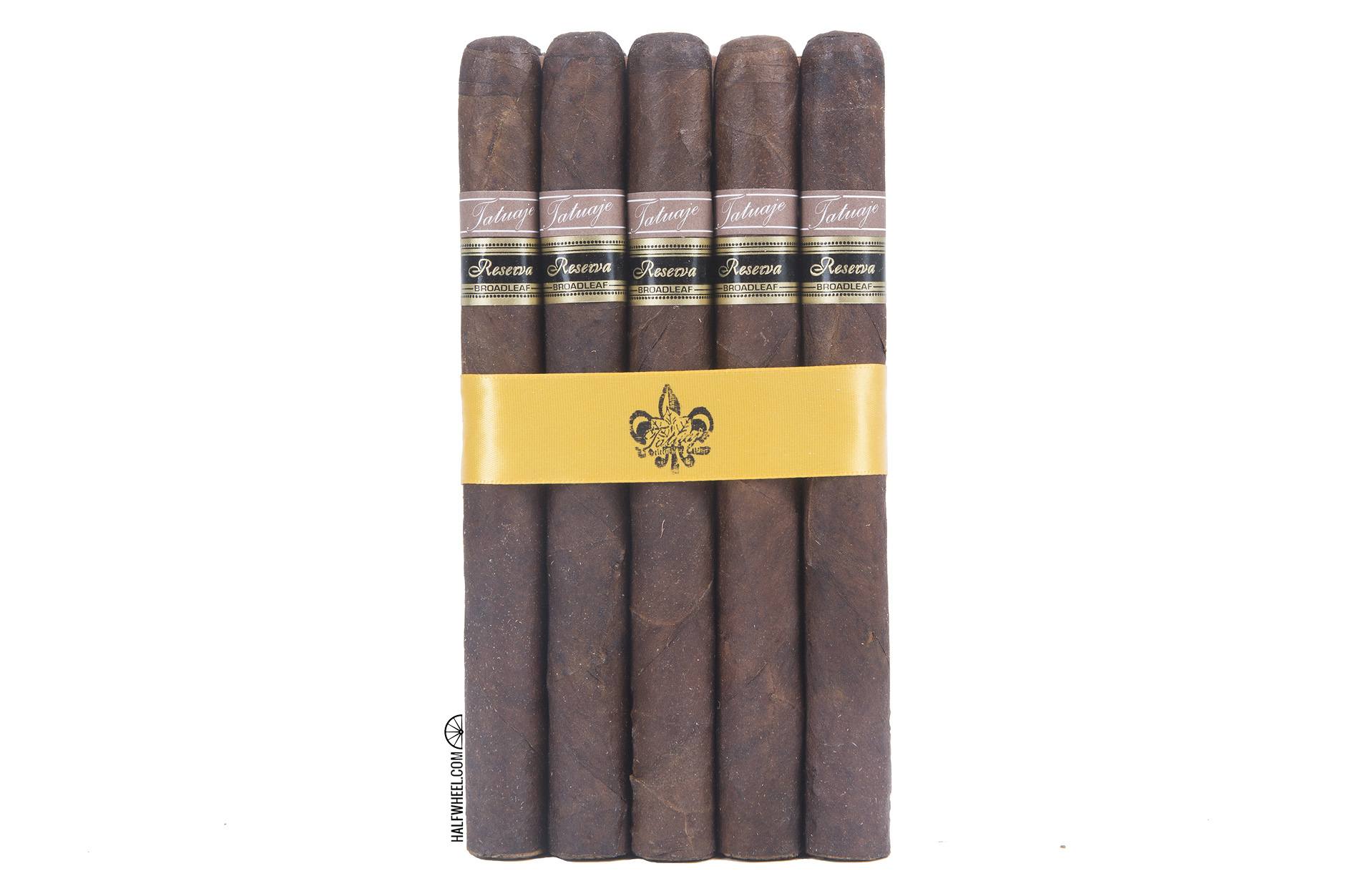 There a total of 10 different vitolas included in the Reserva Broadleaf Collection. 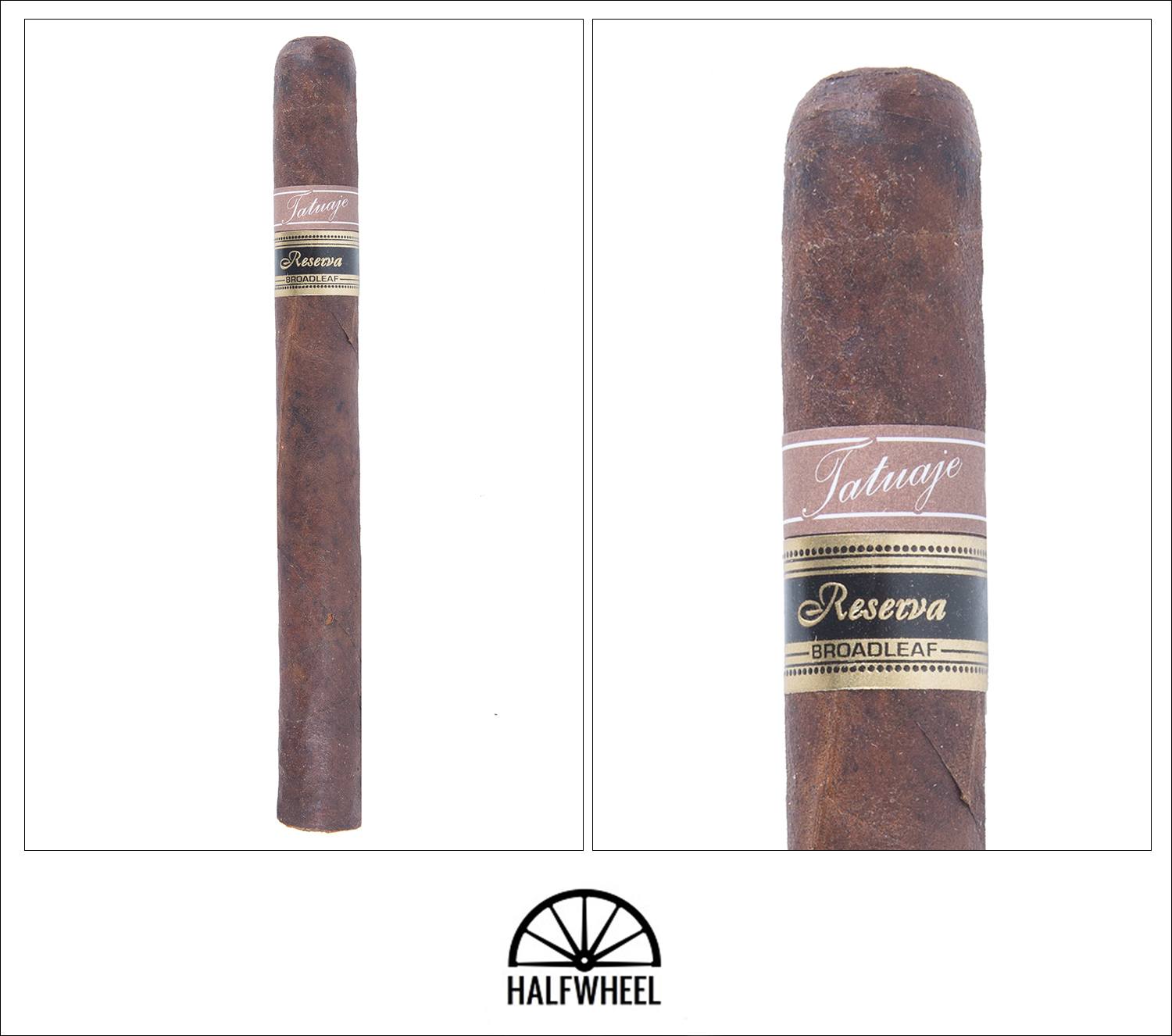 Similar to the rest of the cigars in the Reserva Broadleaf Collection, the Tatuaje Reserva SW Broadleaf is a gorgeous specimen visually, with a cinnamon-brown wrapper that is quite rough to the touch and a number of veins present. The cigar is a bit more firm when squeezed than the others vitolas from the box I have smoked, and the cap seems well applied. Aroma from the wrapper is a combination of barnyard, aged oak, sawdust, earth, manure and leather, while the cold draw brings flavors of oak, creamy peanuts, leather, fruity sweetness, spice and a touch of black pepper.

The Tatuaje Reserva SW Broadleaf starts off with a wonderful combination of roasted cashews and bitter espresso, followed closely behind by notes of oak, earth, barnyard, baker’s spices, hay, Flintstones vitamins, and pencil lead. There is a noticeable amount of both dark fruit sweetness and black pepper on the retrohale, but both are fairly restrained in the profile so far, and there is just a touch of spice on my tongue. While the draw has the ideal amount of resistance after a simple straight cut, the burn is a bit wavy, albeit nowhere close to needing to be corrected so far—and the smoke production is quite high off of the foot. Strength-wise, the Reserva SW Broadleaf starts off a little lighter than I expected, but does ramp up to hit a point close to medium by the time the first third comes to an end. 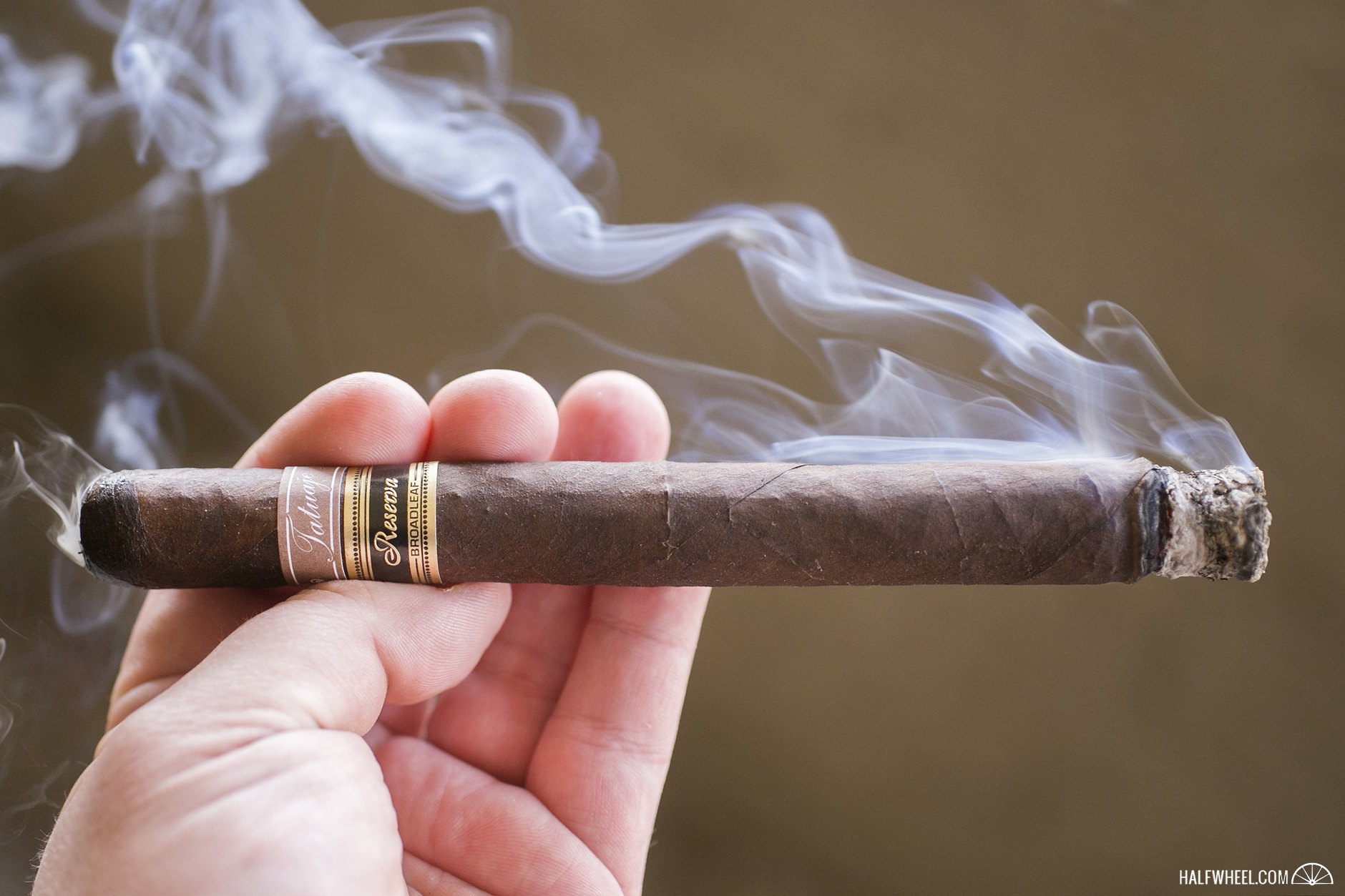 While the combination of espresso bean bitterness and roasted peanuts retains the dominant spot in the profile during the second third of the Tatuaje Reserva SW Broadleaf, a flurry of new flavors make themselves known, including grass, aromatic cedar, orange peel, yeast and a slight hint of floral. The dark fruit sweetness from the first third is still very much present, and seems to be gaining strength as the second third moves to its conclusion, while the amount of black pepper on the retrohale seems to be virtually unchanged. Construction-wise, the draw continues to impress, and while the burn remains a touch wavy, it is still not bad enough for me to correct. The smoke production is still quite high, and overall strength has increased noticeably, reaching a bit past the medium mark by the end of the second third. 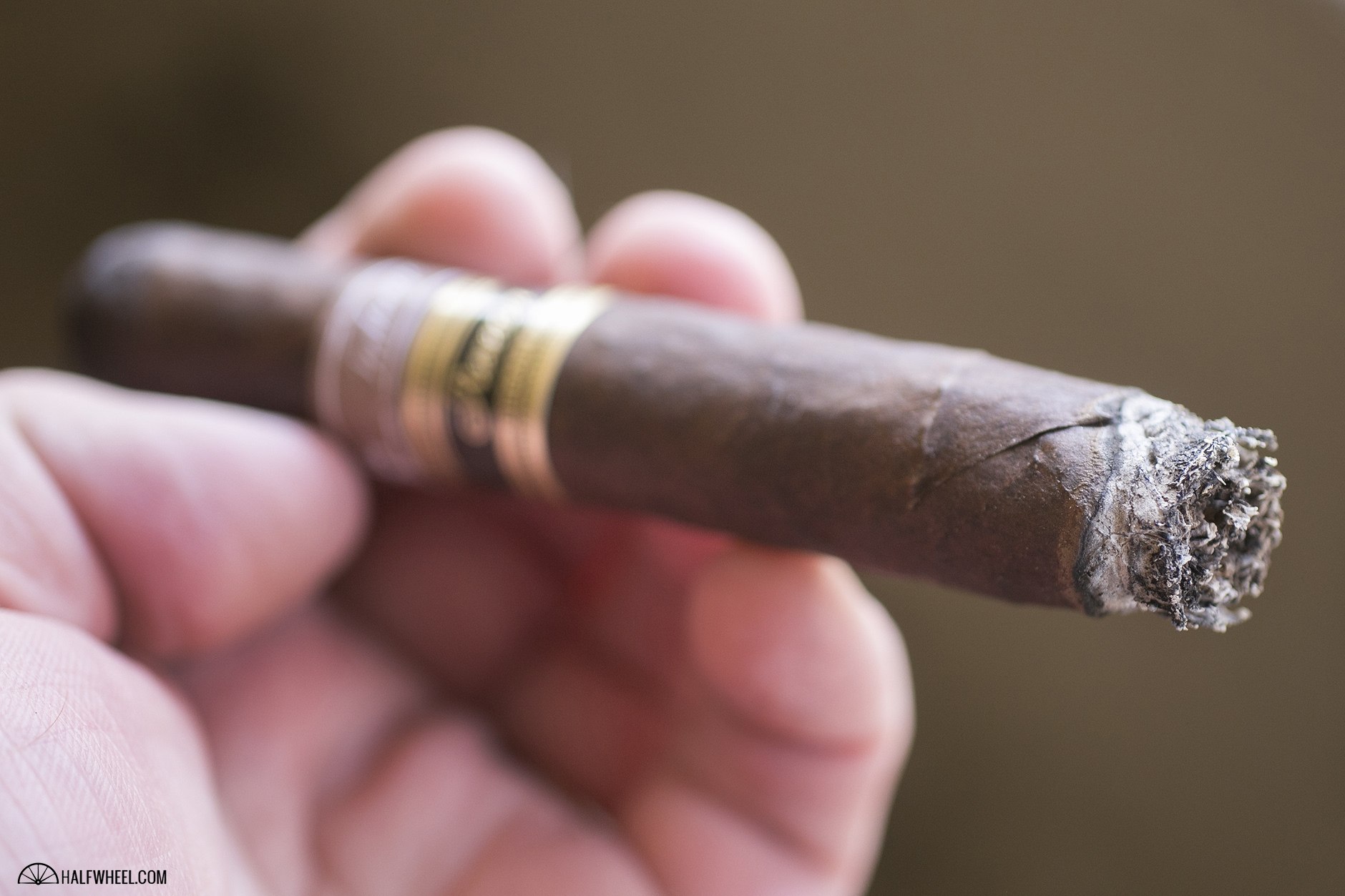 Unfortunately, the final third of the Tatuaje Reserva SW Broadleaf has some issues compared to the first two, starting with the flavors in the profile, which seem to become a bit muddled, losing the distinctness that was so prevalent before. While I can still taste notes of cashews, espresso beans, hay, earth, cedar and citrus, there is not one flavor that dominates the rest. Both the dark fruit sweetness and black pepper are still obvious in the profile, but both in much lesser amounts, with the sweetness in particular taking a major hit. In addition, the burn has become bad enough that I am forced to correct it a couple of times, although the draw is as excellent as the first two thirds. Finally, the overall strength hits a point in-between the full and medium marks just as I put the nub down with less than an inch to go. 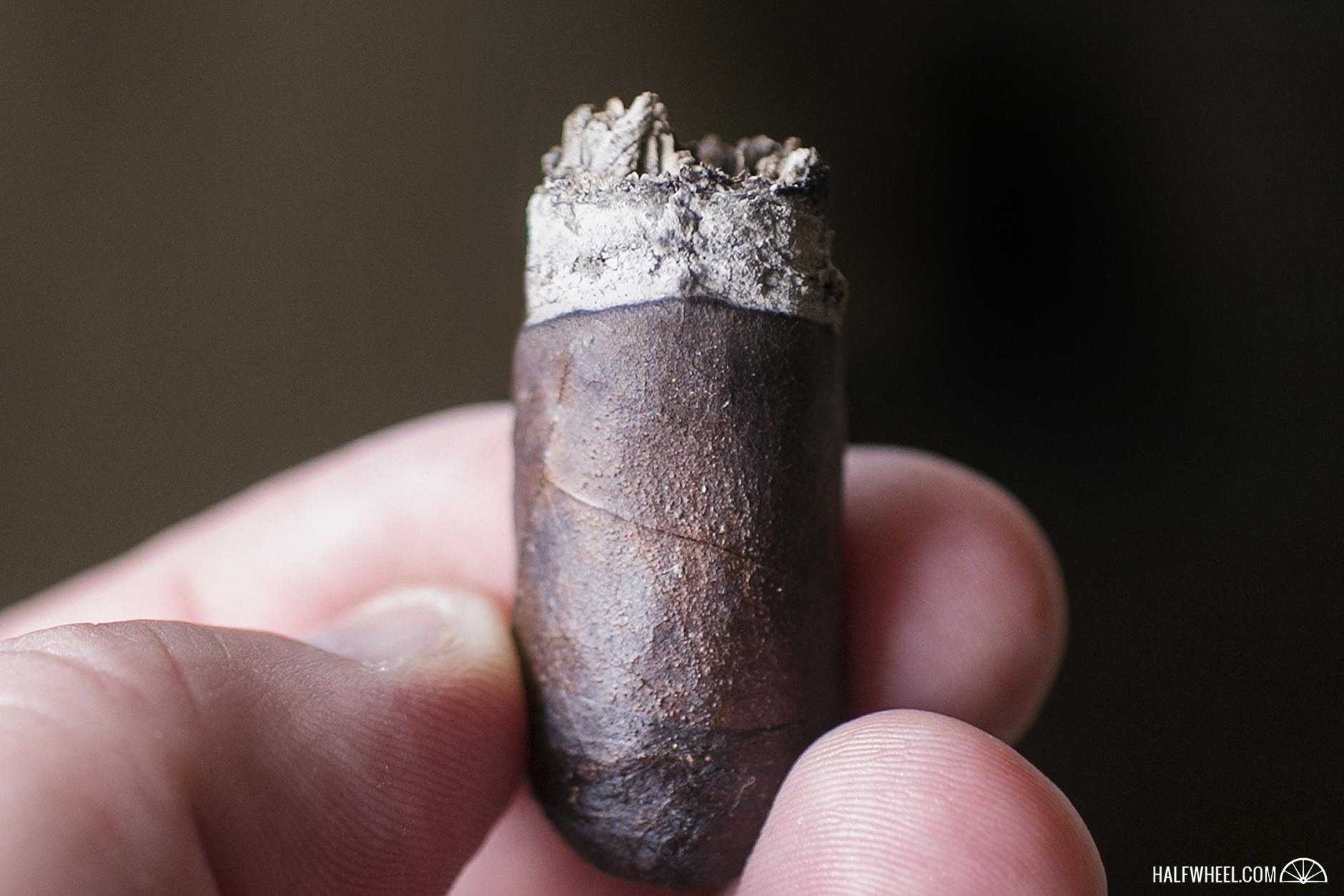 No, it is not as good as the original Tatuaje SW Reserva Maduro, it's also not the same blend. But if you are looking for a very good example of a Tatuaje broadleaf-wrapped blend, the Tatuaje Reserva SW Broadleaf is a good place to start. The profile did take a hit in the final third on all three samples, with flavors that were just not as distinct nor as nuanced. I haven't smoked all of the Reserva Broadleaf Collection, but this is easily the best of the five I have smoked.