About a week ago, it was announced that Jose Agosto from Gloucester Street Cigars in Boston had a brand new Tatuaje single store limited release, the Pork Tenderloin.

Now, this limited release stuff is all old hat to Agosto. He sold the Porkchop vitola back in June of 2009, and he is also the person who came up with the idea of the “Monster Series” along with Pete Johnson. In fact, the name the the cigar Porkchop came from Jose’s nickname, which he has had for quite some time.

What you may not know is that Jose is also planning another release in the “Meat” series.

While details are sketchy (and could change at any time), it is dubbed the Meat Locker, and will consist of four different vitolas in one large master case. Interestingly, as of now, the Porkchop will be rereleased and will be one of the four vitolas included in the Meat Locker, although it could have a slightly stronger blend.

Release date for the Meat Locker is said to be sometime around Christmas of this year and just to be confusing, there are also rumors of another Butcher Cut vitola that could be released in October of this year as well.

Getting back to info about the actual cigar we are reviewing today, the blend in the Pork Tenderloin is an interesting choice as well.

Pete Johnson described it as, “this is almost like a fat J21 with Broadleaf and a pigtail…”

There were only 200 bundles of 25 cigars produced of this blend to be sold totally 5,000 individual cigars. The broadleaf wrapper that is being used on most of the newer Tatuaje releases is another interesting point. It seems that Johnson has started sourcing all of the broadleaf directly from only one farm in the U.S.A., as opposed to buying it from various brokers, which is what he used to do.

The packaging of this cigar is something to behold as well. Each bundle of 25 cigars (wrapped in cello) is wrapped in actual butcher’s paper, much like a piece of pork tenderloin would be, oddly enough, and a sticker made to look like one used at a super market complete with bar code, although sadly the bar code is not valid, is used to wrap the package up. 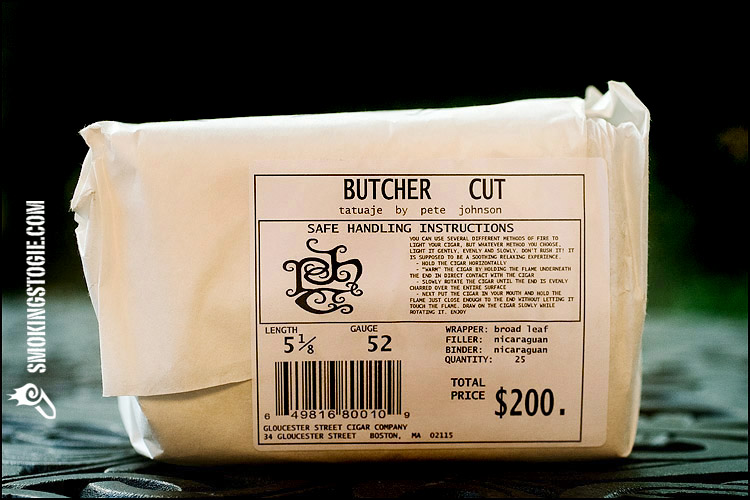 The Pork Tenderloin is a fine specimen and feels great when held in your hand. The Connecticut broadleaf wrapper is a very dark mottled brown color and while there are obvious veins running down the length of it, they are not large enough to be annoying. There’s just a tiny amount of oil on it and is really more of a matte texture to it; rough, but not too rough. The Broadleaf smells quite strongly of leather, pepper and chocolate. The Pork Tenderloin is extremely dense, one could say beefy, and is also more spongy than I expected when squeezed. Interestingly, while I smoked three cigars for this review, two of them, including the one photographed here, had round feet, but one of them had a slight box-press to it. Each Pork Tenderloin is unbanded and offered in cellophane.

The first third starts off with some spice right off the top and on the tip of my tongue, but it is the perfect amount, not overwhelming at all. As the smoke progresses, the spice remains fairly constant, and flavors of dark, not bitter, chocolate, leather and just a bit of black pepper are present. The burn is fairly inconsistent in the first third as well, but seems to be getting better as it progresses.

Into the second third, the spice from the first third begins to decline until it was becomes more of a background note. Still there, but not an active presence. The profile of the cigar also turns quite a bit creamier in nature and I am getting a very strong dark coffee note, along with flavors of leather and cedar. Not much in the way of sweetness, but the creaminess is a great change in the middle of the smoke. In addition, the Pork Tenderloin’s burn evens out. The spice begins to rev up at the beginning of the final third, increasing until the end of the cigar. Strong coffee and leather remain the Pork Tenderloin’s dominant flavors. It gets hot towards the end, but nothing unmanageable. The strength of the Pork Tenderloin also kind of sneaks up on me towards the end leaving me just a bit woozy. It’s not an overwhelming feeling, but I was not expecting it to hit me so hard and so suddenly. I have made no secret of the fact that some of the latest releases from Tatuaje have been hits (Tatuaje Petit Cazadores Reserva) and misses (Tatuaje Outlaw), but the Pork Tenderloin is everything great I have come to love from one of Pete's limited production sticks. Spicy and creamy all at once, with a noticeable strength and changing flavors, this one is a cigar that will only get better with time. I would suggest that if you are on the fence about buying any, you should take the plunge, and if you don't like them, I will buy them off you. Outside of the aforementioned SW Maduro, which wasn't meant to be a single store release to begin with, this is easily the best "single store release" that Pete has ever released, and I really don't know how he is going to top it.