When you think of Tatuaje, a few things come to mind, including the My Father Cigars S.A. factories, which has made all of the brand’s cigars—except three from some of Pete Johnson’s earliest days in the cigar business.

Those cigars—the Tatuaje Nuevitas, Nuevitas Jibaro No. 1 and Nuevitas Jibaro No. 2—were all made at Tabacalera Tropical in Nicaragua. At the time, Tropical was undergoing changes thanks to new ownership and an influx of new talent including José “Pepín” García, the late Arsenio Ramos and others. Ultimately, Johnson discontinued the cigars in 2007, which meant that all of his cigars were now being made at factories owned and run by García and family. 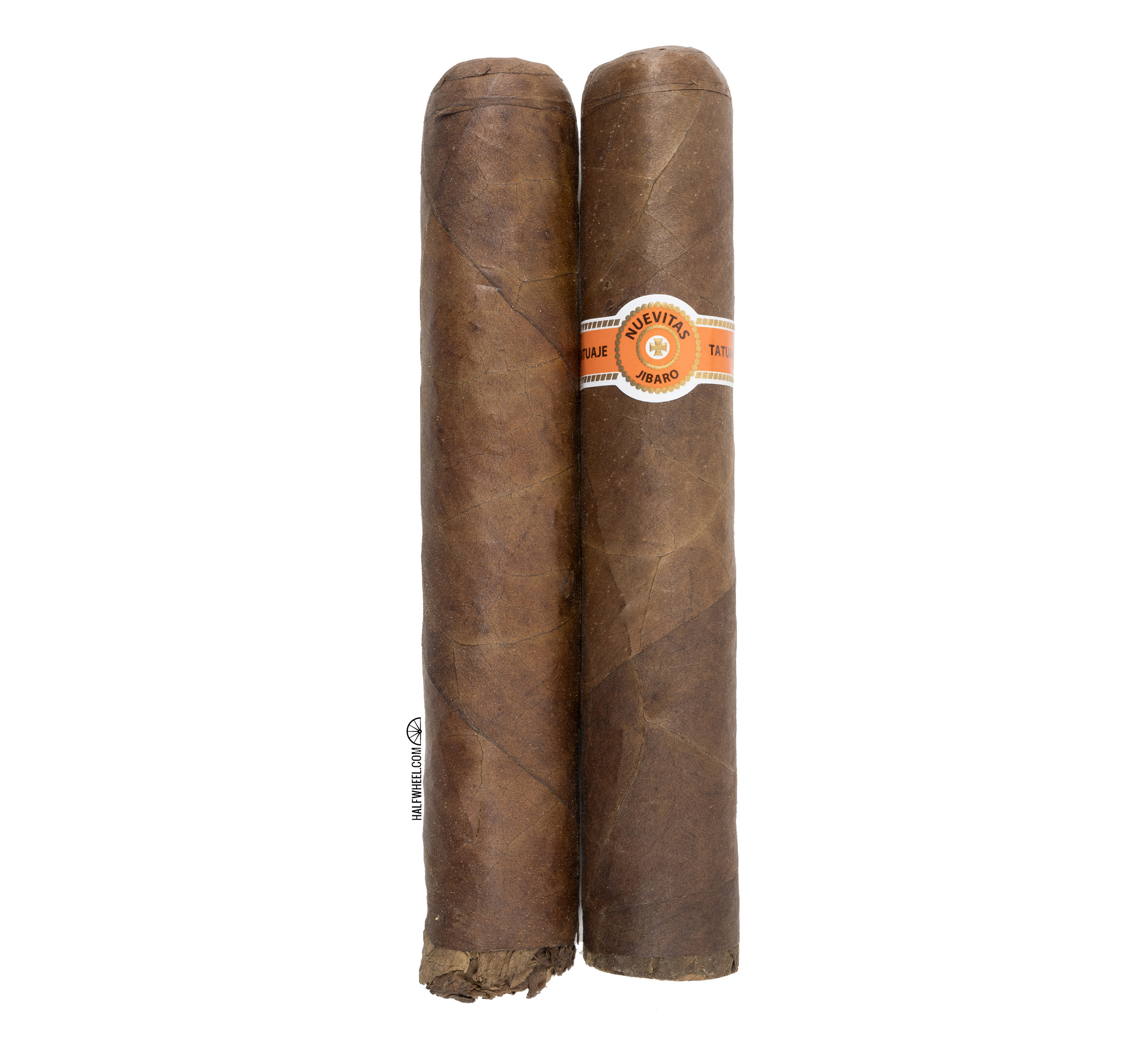 Johnson has brought the trio back, now made at the My Father Cigars S.A. factory in Estelí, Nicaragua.

The cigars are all Nicaraguan puros using corojo 99 wrappers, and all come with white and orange bands. While they also look similar to the originals as pictured above, there are some ways to tell them apart. The Nuevitas uses a predominantly white band with orange trim, while the Nuevitas Jibaro sport orange bands with white trim, as well as a unfinished foot with a bit of the binder and wrapper sticking out. The sizes are also different, as the Nuevitas comes in a 5 x 52 robusto while the Nuevitas Jibaro No. 1 is a slightly thicker 5 x 54 and the No. 2 is a 6 x 52 toro. The Jibaro releases also come in 50-count boxes, whereas the Nuevitas is packed in 25-count boxes. All three are regular production lines. 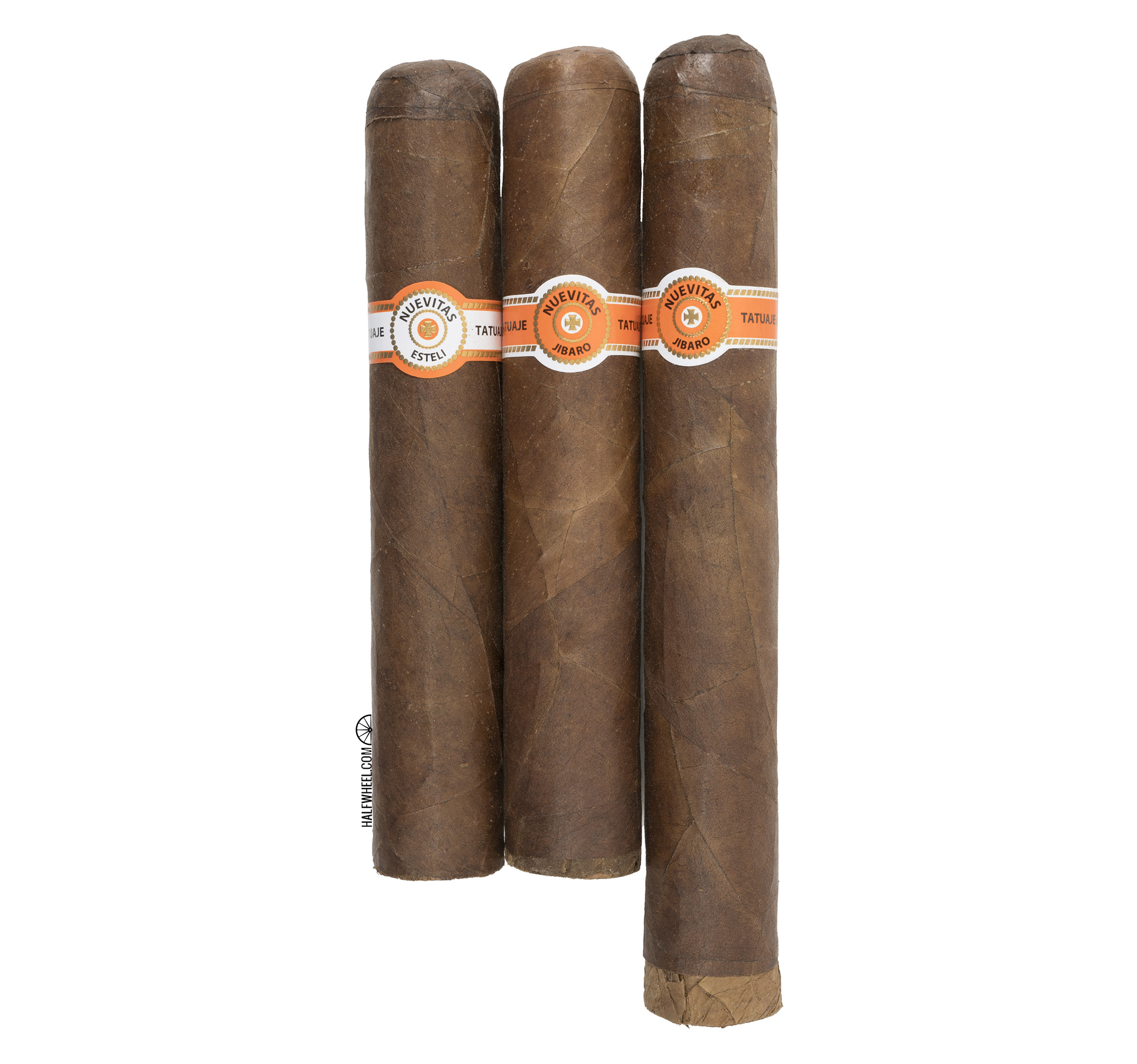 As for the name, Nuevitas is the name of a town in the Camagüey province of Cuba, located on the northern side of the island nearly 400 miles east of Havana.

Jibaro, or seemingly more accurately, jíbaro, is generally a Puerto Rican term used for people who live in the country, specifically farmers that employ traditional methods of working the land. Johnson said that he had considered the name guajiros, which is a term for a Cuban agricultural worker, but then he came across jibaro as another option. He wanted the cigar to be similar to a farm-rolled cigar, one that is homemade and very simple. 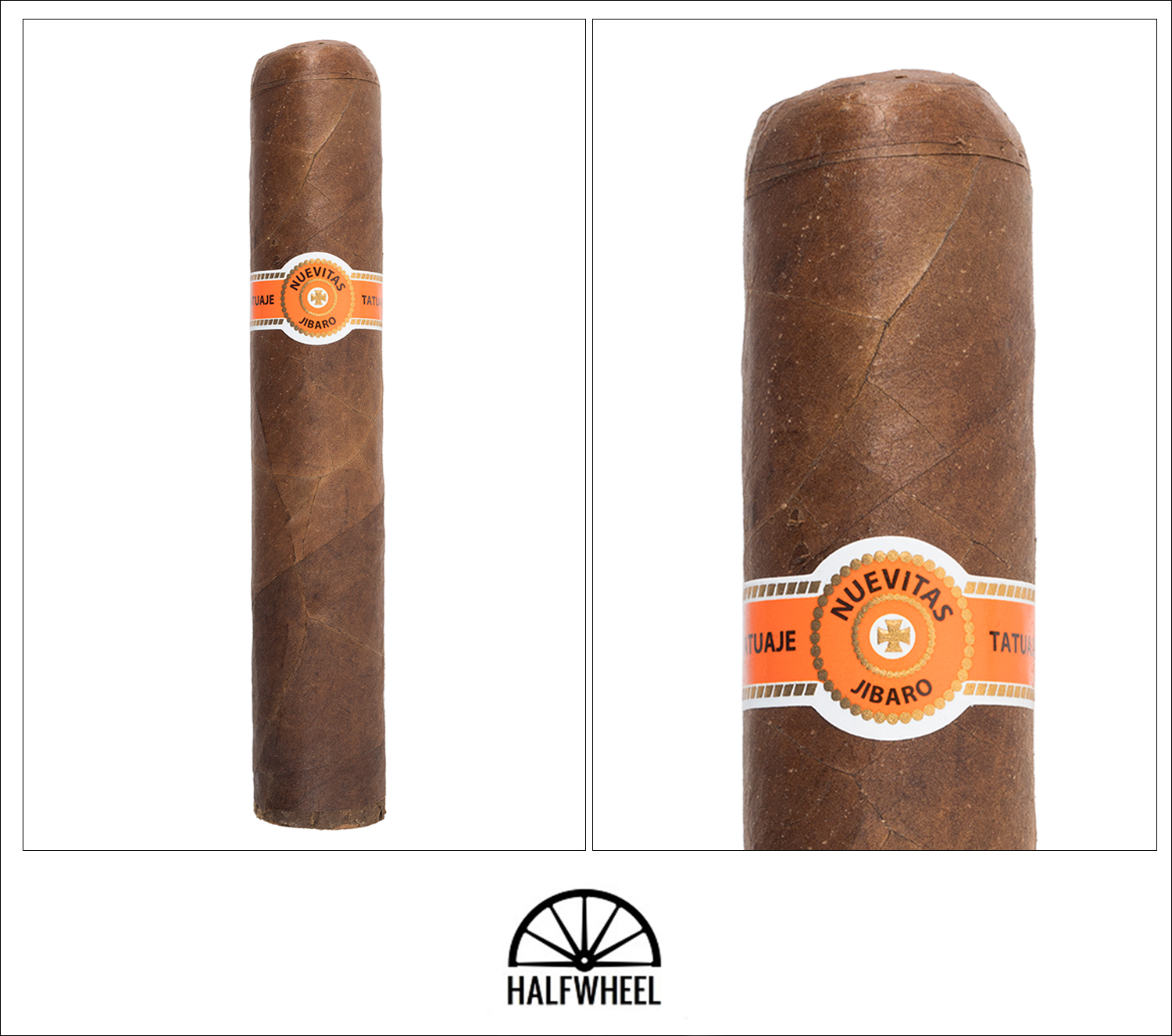 Other than the orange band on a Tatuaje cigar that has me thinking about Halloween, the most notable aspect of the Tatuaje Nuevitas Jibaro No. 1 is the partially unfinished foot, with just a sliver of binder and filler creating a bit of contrast. The wrapper is fairly smooth and oily, with a number of veins and some sporadic spots of tooth. It’s a well constructed, firmly rolled with the second sample offering a bit more give than the others, and all have very nice finished heads and caps. The wrapper has subtle aromas of buttered popcorn and a bit of pepper, while the foot is brighter and more complete, with a bit of floral brightness as well as more developed pepper. The cold draw is also bright but more citrus-laden, with a bit of orange sweetness the first thing I notice. The air flow is good if skewing a bit loose; again it’s the second sample that’s the outlier of the three.

Some significant pepper appears right out of the gate with the Tatuaje Nuevitas Jibaro No. 1, working both the front half of the mouth and the nose on my first retrohale. I’m trying to resist saying that the cigar has some bite, but by the time the burn line starts incorporating the wrapper, that’s the predominant thing that comes to mind. I do wish there was more time to be spent with the unwrapped portion of the cigar as it seems to come and go so quickly that it’s a challenge to cement a profile separate from that with the wrapper. The cigar loses that bite fairly quickly, picking up a hearty wood note in its place while mixing in some earth and pepper for added body and depth. A big clump of dark gray ash falls with a thud, signaling the start of the final third, with the technical performance of the cigar being more than satisfactory. 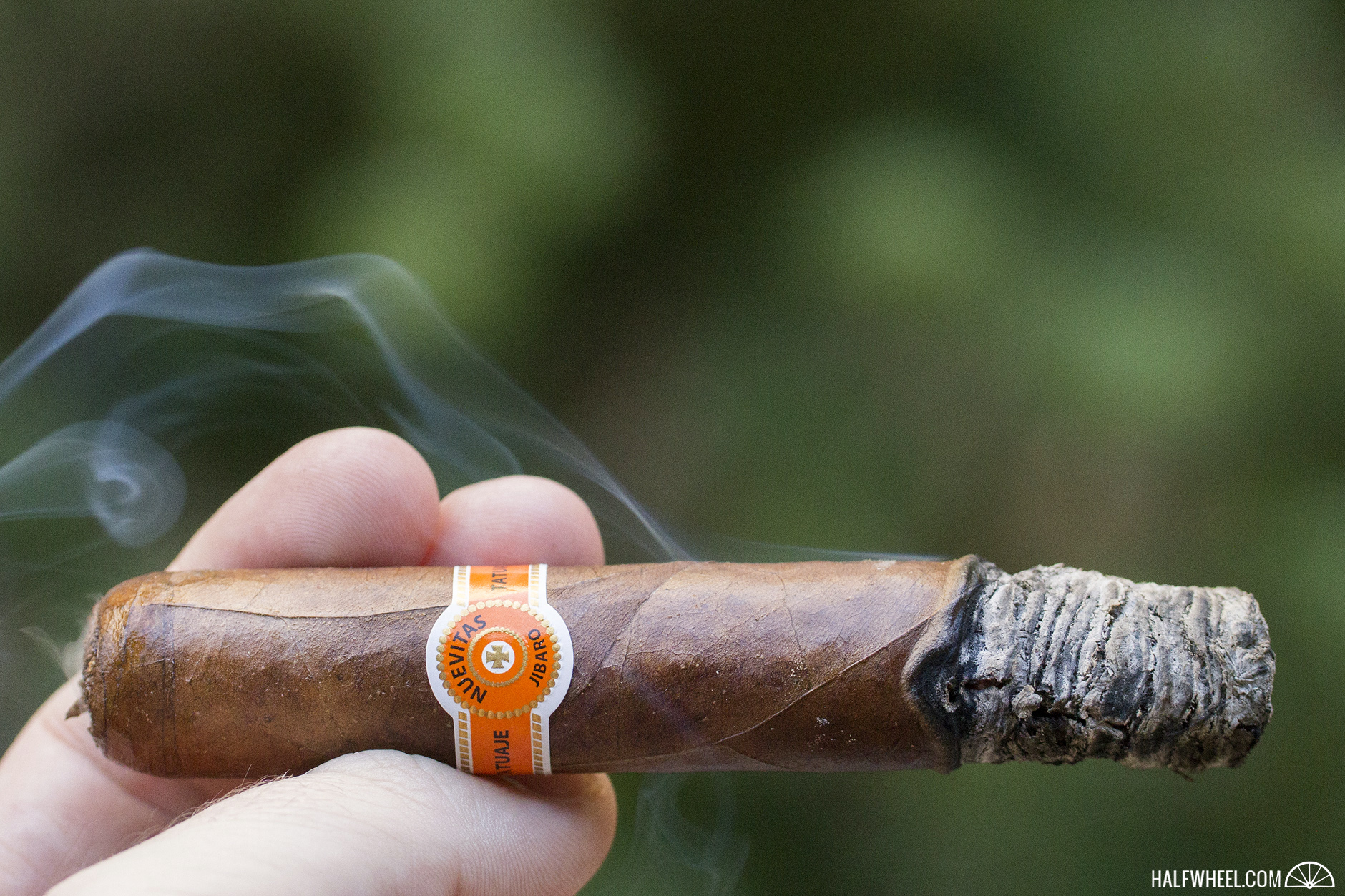 While I thought and hoped that the Tatuaje Nuevitas Jibaro No. 1 had left any harshness in the past, it returns at the start of the second third by way of some grating of the back of the throat. The profile stays on the rough side through the midway point, seemingly a bit youthful with the pepper while struggling to develop much around it that either complements or balances. There is a good bit of dry wood flavor to be found, particularly in the second sample, which has less harshness but still gets a bit rough on the back of the throat. The third sample offers a very enjoyable warm pretzel flavor, something I’m wondering if I missed in the first two samples or if it was simply overshadowed if present at all; either way, it definitely adds to my opinion of the cigar. The harshness once again fades away towards the end of the second third; not completely but enough to be appreciated and something that seems to be helped with slower puffs. 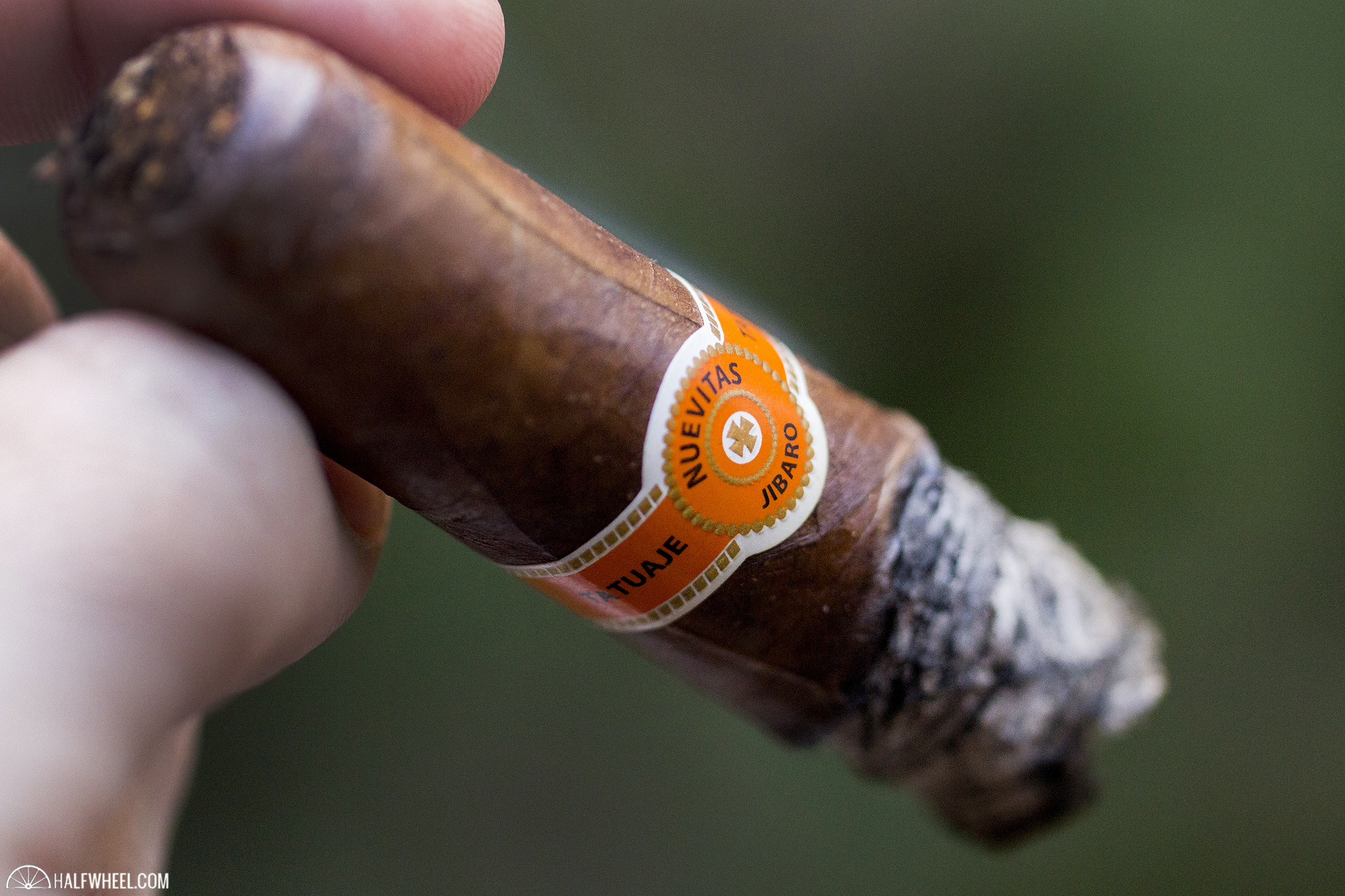 The departure of the harshness is a bit more permanent heading into the final third of the Tatuaje Nuevitas Jibaro No. 1, though the cigar does hold onto its pepper component quite well. It’s now a more developed flavor with some damp cedar and other woods providing a bit of lushness, but it still feels like the profile never reached its full potential of depth and complexity. Brash pepper and harshness dominate too much of the cigar, which leaves the throat suffering from a rough smoke. 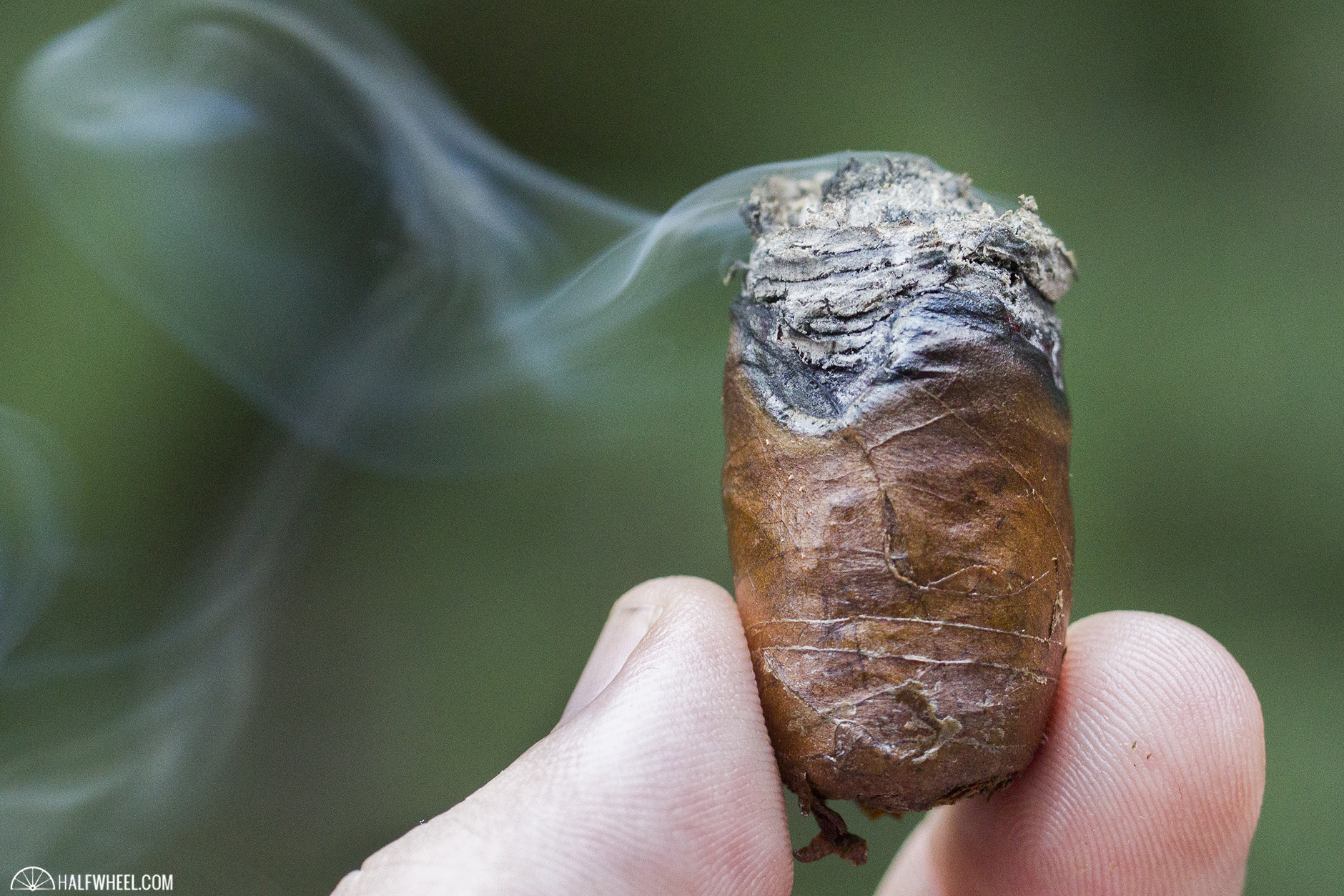 It's a shame when harshness is the only thing I remember from what could be a very enjoyable cigar, but that's exactly the case with the Tatuaje Nuevitas Jibaro No. 1. There are some good flavors—the brief pretzel note stepping into the territory of great—but for as much as I enjoyed them, they were all overshadowed by pepper that was tied too closely to gruffness and harshness that forced my attention to shift from the palate to the throat, and specifically the irritation it endured. Maybe—hopefully—this cigar will mellow out in time, something I look forward to finding out, but assuming this is the off-the-shelf experience, for as much as I like what seems to be at the core of this cigar and hope develops with some rest, I'm likely to reach for something else bearing the Tatuaje name.