Back in 2012, Tatuaje was known for releasing small batches of cigars with little to no warning and even less explanation. That was the case with the Limited Series Mexican Experiment, a limited line that was released with virtually no fanfare in a total of five vitolas, each of which were exclusive to either a specific retailer or a specific region of the country. As the name suggests, the blend was made up of a Mexican San Andrés wrapper covering a binder and filler tobaccos from Nicaragua, and all of the different sizes were packaged in bundles of 25. Fast forward to June of this year, when Tatuaje announced it would be shipping not just a followup to the Mexican Experiment, but also a sister release somewhat appropriately named ME II. While the blend details for both are outwardly the same as the originally release—namely, a Mexican San Andrés wrapper over Nicaraguan tobaccos in the binder and filler—there are only four vitolas instead of five in the original version, albeit the same four vitolas for both new lines.

In addition, although the newest Mexican Experiment is a limited release consisting of only 1,000 bundles of 15 for each size, the ME II is a regular production product packaged in 15-count boxes. Both of the new blends are rolled at the My Father Cigars S.A. factory in Nicaragua and began shipping at the same time to retailers in August.

There are four different vitolas in the ME II line, each of which carry the same retail price of $10. 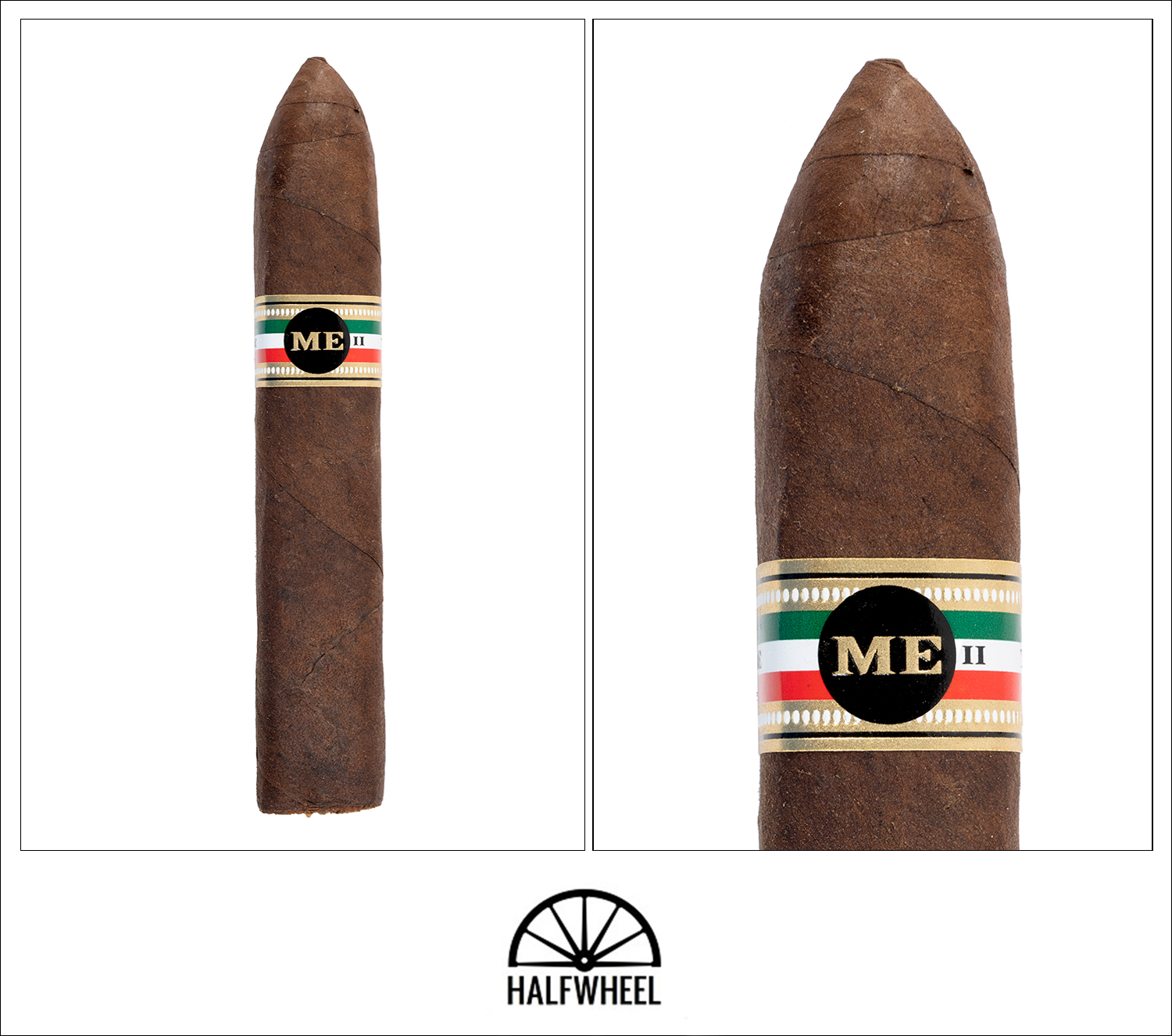 The Tatuaje ME II Belicoso is draped in an extremely rustic-looking dark brown wrapper that is sandpaper rough to the touch, while the soft box-press adds a very nice dimension. There is a touch of oil noticeable and it is nicely spongy when squeezed, but there are no significant veins visible that I can see. Aroma from the wrapper is a combination of earth, leather, manure, popcorn and sweet raisins, while the cold draw brings somewhat subdued flavors of the same raisin sweetness, creamy cedar, earth, hay, peanut shells and at touch of both black pepper and spice.

Starting out the first third, the Tatuaje ME II features a number of flavors, including baker’s chocolate, leather, oak, gritty earth, barnyard and just a tiny amount of distinct mineral salt. The retrohale is fairly tame, although I do pick up some obvious black pepper mixed with some distinct raisin sweetness that comes and goes seemly at random. Construction-wise, the burn is wavy enough that I am forced to touch it up a couple of times, but the draw is excellent after a Dickman cut, giving me the perfect amount of resistance. The smoke production is thick and plentiful off of the foot, while the overall strength ramps up slowly to hit a point firmly between mild and medium by the time the first third ends. Interestingly, the raisin sweetness on the retrohale becomes a bigger player during the second third of the ME II, but the rest of the profile follows along the same path as the first third with flavors of oak, baker’s chocolate, earth, peanuts, leather and hay. The black pepper on the retrohale has increased slightly and has also been joined by a bit of spice on my tongue, although the latter is fleeting at best. Thankfully, the burn has improved noticeably—remaining trouble free throughout the middle third—and the draw continues to give me no issues at all. Strength-wise, the Tatuaje increases slowly but surely, hitting a mark close to medium, but not quite crossing over just yet. The final third of the ME II Belicoso is a virtual carbon copy of second third, with a dominant combination of baker’s chocolate and oak followed by lesser flavors of nuts, hay, earth, leather and espresso beans. There is still plenty of black pepper present on the retrohale, which combines nicely with a still distinct raisin sweetness that does not seem to be waning anytime soon. Both the burn and the draw continue to impress, and while the overall strength increases just slightly, it is still enough to reach a solid medium by the time I put the nub down with about an inch left. I remember being slightly disappointed in what the original Mexican Experiment had to offer when I first smoked it back in 2012, and I was hoping that the newest version would give me a bit more to get excited about. After smoking three of the Belicoso vitola, I was left with a bit of mixed bag: while there is no doubt the blend offers plenty of flavor, it comes up short in the complexity department, with a fairly linear profile that barely changes from the first puff to the last. That is not to say it is not enjoyable—there are some great notes of baker’s chocolate, oak and earth, along with a persistent combination of raisin sweetness and black pepper on the retrohale, and the construction is fairly decent overall—but if you are looking for a Mexican San Andrés-wrapped Tatuaje blend that hits on all cylinders, I would track down a Baby Face or Pudgy Face.