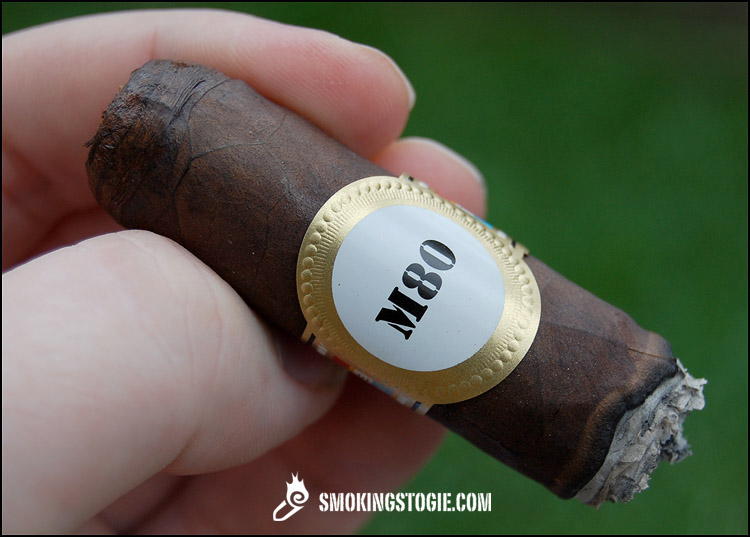 Today we will be taking a look at what has been a highly anticipated cigar, the follow-up to the Don Pepin Garcia Firecracker for Two Guys Smoke Shop, the Tatuaje M80! If you guys aren’t familiar with Two Guys Smoke Shop you should definitely check them out, with a kind, knowledgeable staff and a wonderful online ordering business you just can’t lose. Here is some info on the Shops history from its website.

Two Guys Smoke Shop has been selling cigars since 1985.  That’s when it all started.  It was named Two Guys because it was that simple, just two guys (The Garofalo Brothers, David and John) selling cigars.  After just 18 months, sales were so good they were forced to move from their tiny 200 square foot shop to a newer 500 square foot shop just down the street.  Their first two locations were in Somerville Massachusetts.  Two years later another store in East Boston was added, and with it a small catalogue/mail order division.  Next was a store in Everett Massachusetts.

In July of 1996, Massachusetts added its first tax to cigars.  After a loosing a single handed battle to fight the tax, the Two Guys made a risky decision, pack up their cigars and take their business 30 miles North, over the border to neighboring and “tax free” Salem New Hampshire.  Their Somerville location was sold; the Boston location was closed and because of leasing obligations Everett remained. (The Everett Store has since been sold)  Overnight, the cigars were hauled over the tax-free border and a 10-year established business was just beginning all over again.

In August 2002, just like the Garofalo brothers expected, Massachusetts increased the tax on cigars to 30%.  Since the tax increase, we have noticed lots of new faces and certainly higher sales.”  Suddenly the Two Guys have out grown their space in Salem New Hampshire.  A 7,500+ square foot building directly across from their location on Route 28 (Broadway) formerly the now debunked Apple Computer Town was purchased by Two Guys Smoke Shop and a full rehab was completed.  The Grand Opening took place on Saturday, January 4, 2003.  The weather was bad, over 18 inches of snow that day, but that didn’t stop the more than 300 cigar fanatics to turn out to possibly the World’s largest cigar store.  Two Guys Smoke Shop is located at 304 South Broadway (Rt. 28) in Salem New Hampshire. It includes a cigar lounge and café for members on the second floor with a function room for in house cigar dinners and events.

This year’s Tatuaje M80 shows a stark resemblance to the Don Pepin Garcia Firecracker that was released a few years ago, with an ultra long fuse-like pigtail the cigar really does look like a firework. We are told the blend is based off of the very popular T110 blend that is currently being used for Tatuaje’s newest line, Fausto. With this information it will be no surprise if this cigar knocks some of you on your ass and given the name it damn well should! Jaime García seldom lets us down and most of what comes out of his My Father factory in Estelí, Nicaragua is pure gold.

The box itself is very cool indeed colored with a bright red paint showing an old school black cannon ball type bomb with the words “Tatuaje M80”. Here are some shots of the box. Visually the cigar is really cool looking; it can’t be more than 4 inches long and honestly looks like a firecracker. It has an extremely long fuse pigtail that runs along half of the cigar and is held secure underneath the exclusive band that reads “M80”. The wrapper is very smooth with a little oil and a medium chocolate shade. The pre-light aroma is a little unpleasing in the fact that I can’t definitely smell a little bit of lacquer on it, especially at the foot. This made me check the box itself and while the inside is all cedar I can definitely smell some paint, just a little bit. Outside of the mild lacquer smell I get some cedar, dark chocolate and leather. The pre-light draw is mild with cedar, and a touch of that lacquer I got in the aroma.

Starting off in the first third, I am hit with a ton of spice and pepper — just what I expected given the blend info. There is a lot of spice through the nose and a ton of black pepper on the finish which just completely fills my mouth and trickles down my throat. The initial flavors are oak, dark chocolate, leather and a slight creamy flavor. The smoke itself is thick, but dry with some heat to it. Full-bodied right away. Coming into the second third I start to get a lot of roasted coffee bean, dark chocolate, leather and a very hot spice — like cayenne pepper on the tongue. Interestingly the spice, especially through the nose, has died down considerably.  The cigar is very smooth, not quite creamy in texture but it definitely leaves nice oil on the lips and tongue. Great burn, great draw.

Finishing up in the final third the cigars transitions nicely. I start to get notes of black cherry, licorice, and a deep earthy wood flavor. The cigar is nicely balanced with some pepper and spice and the finish is very long. The word smooth keeps coming to my mind, it’s just a very smooth cigar given the strength and body. I thoroughly enjoyed this cigar. I absolutely love a full strength, full bodied cigar with a ton of flavor and spice and this was just that. I think the average smoker will enjoy these as well, since it didn’t leave me feeling ill or anything. Another thing you can’t deny is the price point, $99 for a box of 15 is a great price, (even though these are a small smoke)  they offer a pretty decent smoke time.