If cigars are ever a category on Jeopardy!, I have to think that there will be an answer that is something to the effect of “Every October from 2008 to 2019, this company sent its Monster Series to an Unlucky 13 retailers.”

To which, one would correctly reply, “What is Tatuaje?”

I bring that up because recently I’ve been catching up on previous episodes of the show, as well as still somewhat mourning the passing of Alex Trebek, the show’s host from 1984 until his death in November 2020. But I also bring it up, because 2020 marked the first year without a Monster Series release since 2008. That wasn’t much of a surprise, as Pete Johnson had long said it would be a series of 13 cigars, and 2019’s release of The Chuck and The Tiff brought the total to that number. While 2020 wasn’t responsible for the lack of a Monster Series release, it did catch my attention as just another one of those interesting things in a year that has been more than interesting.

But that didn’t mean that Tatuaje didn’t have anything to ship to retailers in October; quite the opposite in fact. The company released the event-only Shrunken Pumpkin and a pair of new sizes and a new look for Cabaiguan, while November would bring three new sizes for the L’Atelier Selection Spéciale.

Amidst that, Tatuaje announced the Karloff, a cigar that should have immediately perked up the ears of fans of an early offshoot of the Monster Series. It’s also a cigar with some history behind it.

Back in 2008, Johnson had plans to create a complementary line to the Monster Series called the Actors Series that would honor those who played the monsters honored by the other line. Since Frankenstein was the first movie monster honored in the Monster Series with The Frank, the first in the Actors Series would be The Boris, a 7 x 49 Churchill named for Boris Karloff, who played Frankenstein’s monster in the 1931 film.

Except, there was a bit of a snag with that release, as the name Boris was already in use for another cigar, specifically, the Boris 11, which is produced for Corona Cigar Co. in Orlando, Fla. As part of resolving that snag, Johnson made an agreement with Jeff Borysiewicz, owner of Corona Cigar Co., that included a stipulation that Johnson would produce a limited edition cigar for the store. That cigar was the Little Boris, a 5 1/2 x 49 robusto released in July 2012 and re-released in November 2018. The Karloff is a 6 5/8 x 49 grand corona, and less than half an inch shorter than the original Boris. Both the Boris and Karloff use the same tobaccos, at least on paper, meaning an Ecuadorian Sumatra wrapper over a Nicaraguan double binder and filler. However, Johnson said that the Karloff’s is a tweaked blend that is a little fuller than that of the Boris, adding that consumers shouldn’t expect the exact same profile from this new cigar, even though the ring gauges of the Boris, Little Boris and Karloff are all the same.

Johnson released 4,000 dress boxes of the Karloff, each containing 13 cigars, with individual cigars priced at $13, before taxes. 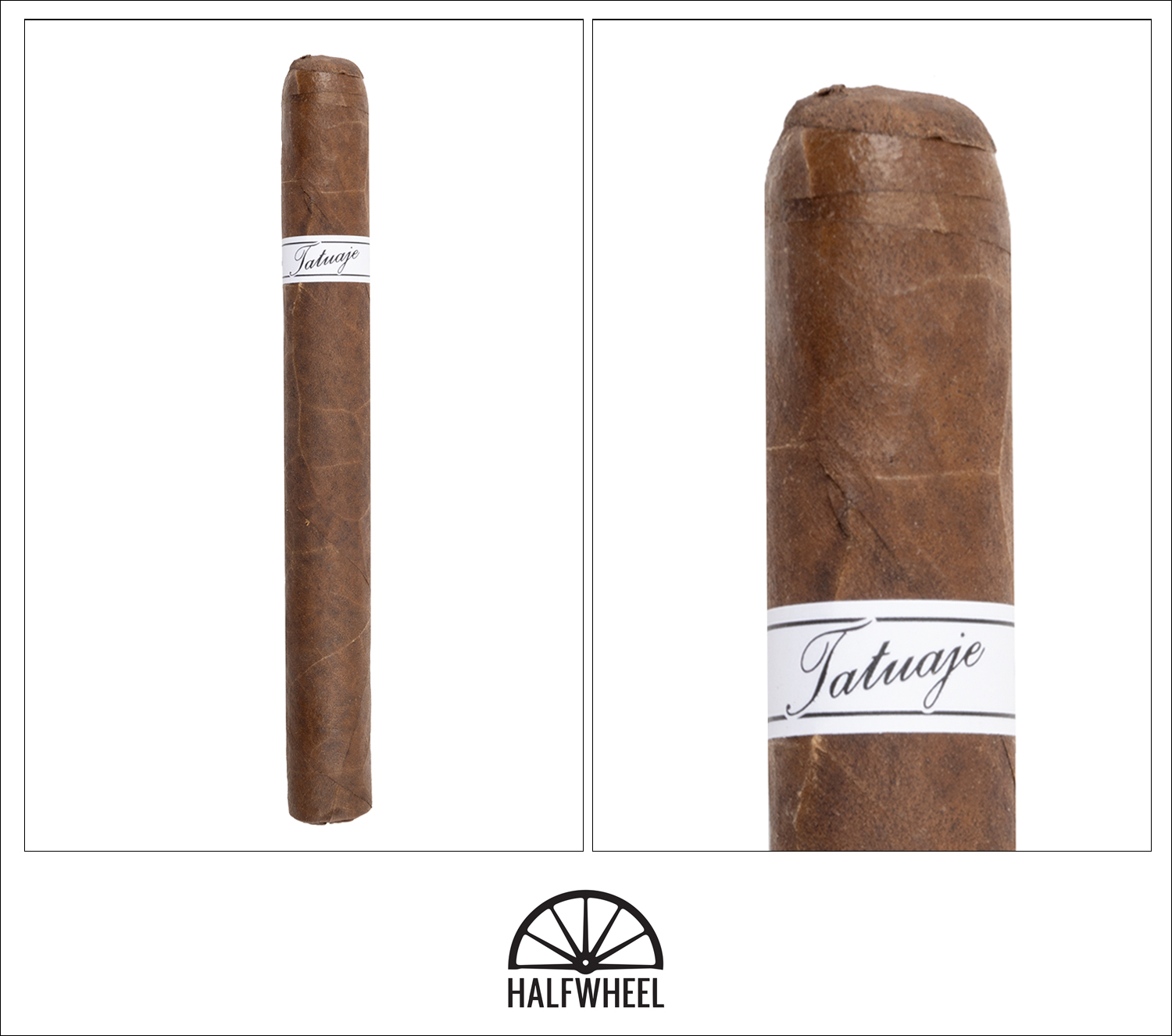 While this isn’t part of the Monster Series, the Tatuaje Karloff feels right at home with the vitolas in that line. The sizable 6 5/8 x 49 vitola is substantial in the hand and certainly on par with the double corona and Churchill vitolas it is close to in size, as well as the all-too-ubiquitous 6 x 50 toro. I can’t say that the color of the wrapper stood out in the daylight, but under the light of my cellphone it has a meaty, reddish-brown hue with a bit of shine to it, a much more vibrant color than I was expecting. That oily sheen transfers to the fingers, which glide over the wrapper thanks to small, sparse veins and no tooth. There’s a bit of give to the cigar, as the outer layers seem to compress just a bit over a more solid core, something that leads me to whisper, oh, Cubanesque. The covered feet are generally done well, maybe a bit puffier than I’ve seen but not distracting. The foot offers aromas of warm root beer, tree bark and cold salami. There’s a bit of black pepper in there as well, though it is far from prominent, let alone dominant. Air moves well on the cold draw, maybe a touch open but well within the acceptable range. There’s a big tingle on the lips from the tobacco, and it feels like I’m getting a bit of sweetness from the tobacco itself. Flavors are subtler but almost a mirror of what I picked up the aroma minus the salami.

As soon as I light the Tatuaje Karloff, I’m greeted by a nostril full of smoke that reminds me of a warm tobacco barn; a mix of earthiness and wood, both with a slightly organic spin and the combination of which gets accented by black pepper. It can be a bit gritty on the palate, which might not be the best opening but it’s not completely off-putting. If Pete Johnson was going for complexity out of the gate, he seems to have achieved it, as the flavor also picks up a subtle finish reminiscent of a lemon-lime soda, not as artificial as 7-Up or Sprite, but something reminiscent of the flavor. After I knock the first inch of ash, the flavor mellows a bit while white pepper highlights the retrohale, but what gets me is the aroma of the resting cigar, as it has a citrus sweetness atop a light campfire aroma that is almost magical. The flavor, meanwhile, softens a bit without giving up all of its pepper but adding a creaminess that is slightly sweet and reminiscent of vanilla pudding or custard. It’s certainly not what I was expecting from this cigar—or any cigar without a Connecticut wrapper on it—but the result is stunning. Flavor is a very smooth medium, body is thick and medium as well, while strength is a tick shy of medium so far. Construction is excellent. There’s a ramping up of flavor to star the Tatuaje Karloff’s second third, with a flavor that seems to bounce between woodiness, wheat toast and warm mixed nuts. As soon as I think I’ve pegged it, it changes, or at least gets me thinking about something else, which makes for a challenge to document but a pleasure to enjoy. Smoke absolutely pours out of the end of the cigar, and with no breeze tends to hang around before finally dissipating. There are touches of earthiness beginning to re-emerge, which gives the smoke a bit more texture and flavor, yet there also seems to be creaminess coming along right behind to smooth it out. The first half has been a very enjoyable and engaging mix of both flavors and textures, not to mention complexity and balance from the cigar. As the burn line crosses the midway point, the creaminess begins to fall away and the flavor picks up a dry soil flavor, which at first taste isn’t as great as what came earlier but I’m intrigued to see how it progresses. It is a fairly quick transition, as I get a bit of mineralogy and the flavor definitely seems headed on some sort of journey. That evolves into a bit of chalkiness, and while it’s a flavor I’m not a fan of, here it still seems to work somehow. What is most interesting is how steady the progression is and how far it has come in seemingly not a long period of time, though I will note that the more it drags it out, the better the overall result. The final puffs of the second third add just the slightest hint of mint to the flavor and aroma, though with everything else that is going on it is almost smoky and wrapped in a bit of chocolate. Construction remains fantastic, and while smoke production, combustion and the burn line are all great, it does seem like the cigar needs a slightly quicker smoking rate. Flavor is continuing to alternate between medium-plus and medium-full, body is in lockstep, and strength is building up out of medium territory. As much as I want the second half of the Tatuaje Karloff to simply be an extension of the first half, the tobacco has different ideas as it continues to build on that change that happened at the midway point. There is still more dry earth, not quite dusty in the way Honduran tobacco can be but not as heavy and dense as some Nicaraguan is generally considered to be. Black pepper makes its way around the edges of the flavor and tongue, never really dropping that big bomb hit, which is quite alright by me. The final inches brings about a bit of disjoining of the flavors, as the woody notes break off and start wanting to do their own thing, standing out on the palate and becoming just a touch harsh. If anything, the second half of the Karloff stands as a contrast to the first half, while being close to as enjoyable if a bit less sublime. As much as I want the creaminess that marked so much of the first half to come back, it just doesn’t, but at this point, it’s asking the chef for more of the second course when you’re on course 21 of a 23-course dinner. If anything, the experience is better just going with what the Karloff has to offer, which continues to be impressively complex and balanced. Construction remains fantastic, while flavor finishes medium-full, body medium-plus, and strength on a trajectory for full but falling just short of that mark. To put it simply, wow. The Tatuaje Karloff caught my attention nearly from the moment I lit the first sample and kept it all the way until the final puff of the third cigar. The first half earns the word sublime, while the second halves are all enjoyable if a very different spin on the tobaccos, which in itself is an impressive feat of blending to get two different yet complementary expressions of flavors. Give this cigar a clean palate, clear head and focused attention and it will reward you handsomely. A brilliant cigar.