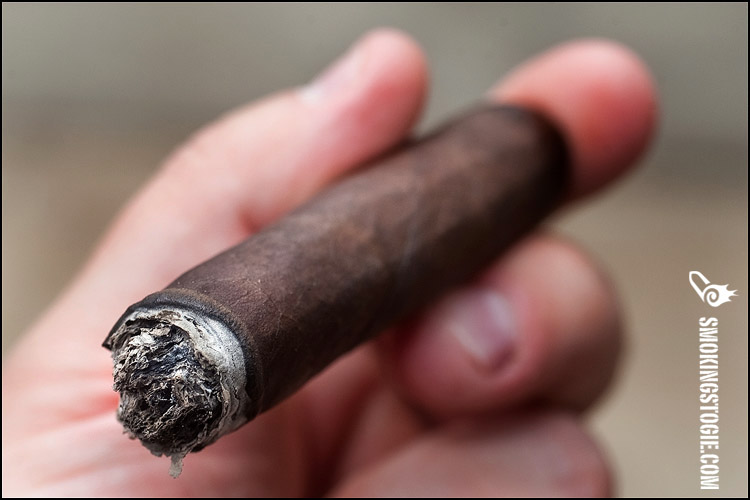 Way back in July of 2009, Tatuaje released a cigar for R.Fields in Honolulu, HI named the “T110“. Only 200 boxes of 25 were released…The “T” in the name “T110“ stands for “Thermonuclear” and the “110” stood for the size of the stick in mm…The cigar was made of All Ligero and was a blend of Jalapa and Estelí tobacco. If you are wondering, the “Thermonuclear” was an original cigar that Pete made almost as a joke, since it made quite a few people throw up when they smoked it, it was so strong (sadly, I have still not smoked one, despite literally YEARS of looking). The size and blend was nicknamed a “Thermo Jr.”, relating to its smaller size as compared to the original.

After the success of the T110 (the boxes sold very quickly, to say the least), Pete Johnson decided at some point to turn the blend into a regular production cigar with 4 different sizes using the same blend. Along with the Avion (which itself is a blend spinoff of the Fausto), the Black Label Petite Lancero, La Vérité (the Churchill we have already previewed, the Robusto we will review this week) and the La Crisita Criolla (which will also be reviewed this week), Pete is working on beefing up his Regular Production releases, as opposed to LEs (the Avion will be around 30,000 sticks total and the La Vérité will be about 30,000 as well, WELL out of the “Limited Edition” range, in my opinion)…

In terms of the advertising for the Fausto (Which translates to “Lucky”) brand, one of the ads for various magazines can be seen below: Also, while I have not seen any of the Faustos with actual bands on them (yet), the band design as also been released, see below:

Now, the first time I saw this band, I was impressed, (I do love the color scheme and the simplicity of the art work), but I knew I had seem it somewhere before…After a few moments, I realized that the Fausto band had quite a bit in common with the Dunhill Exclusive bands (from the 1960s-1980s) that looked like this:

According to reports, the Fausto will be released in 4 different vitolas at launch, and the prices will range from $8 to $9 MSRP…They are:

Interestingly, if you are wondering (as I did) why there are no smaller Ring Gauge vitolas in the Fausto line, Pete has commented on that as well, saying:

“I made prototypes of a 5 5/8 x 46 but I was worried about the consistency of the draw. When you get to smaller ring gauges in a blend with high priming tobacco, you have to start pulling tobacco and that would alter the actual blend. This is not to say I’m not playing with it still.” 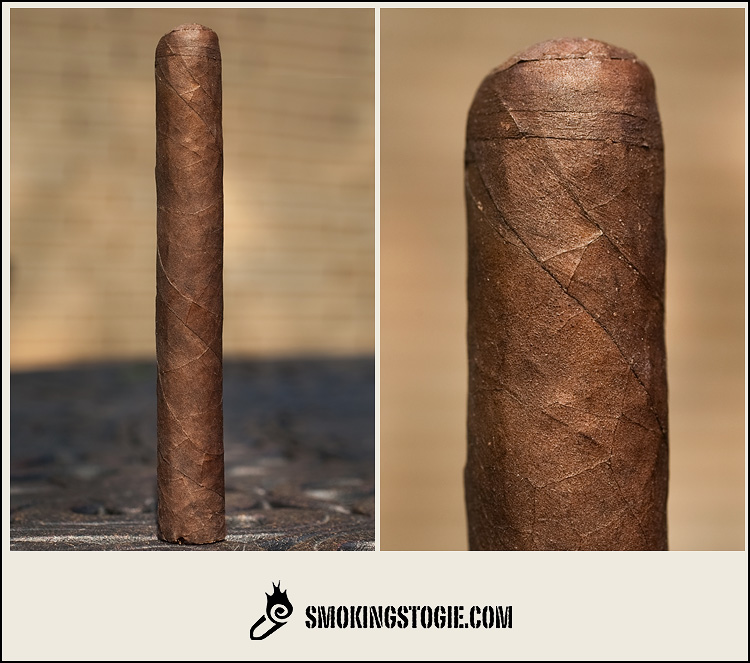 The Cigar itself is nicely rolled, with a few veins, but nothing too overtly annoying…The wrapper is a dark espresso brown color (with a bit of a red tint), and has some oil on it (although not as much oil as the OR T110 wrapper, which looked like it was dipped in it)…It is perfect when squeezed, not too hard or soft…The Wrapper smells of Dark Chocolate, hay, pepper and leather…

The First Third starts with quite a lot of pepper up front (which I was expecting) along with flavors of Leather, Oak, and Dark, bitter coffee…The pepper actually calmed down a bit by the end of the first third (which I was Not expecting) and I could already feel the strength that was present…Very Dark, rich flavors to start…

During the Second Third, the strong black pepper from the first third receded to more of a background note (still present especially on the retrohale, but not in an “In your face” way)…The main flavors remained constant from the first third for the most part, although there was a nice amount of earthiness that was added to the mix…The profile was also a bit more creamy in texture, and the strength was really ramping up, easily to a “Full” by the end of the second third…

The Final Third keeps the same basic profile as the rest of the cigar with flavors of Leather, oak, espresso, and rich tobacco…The strength is “Full”, but remains constant (after the 2nd third)…There is more black pepper as well, especially at the end of the cigar, but not as much as the very beginning…a nice ending… The Bottom Line: I ended my T110 Review saying that it had great flavors, but they were overwhelmed by the strength of the blend. Well, Pete has changed up the sizes (and thus the blend, inasmuch as you have to change the overall blend when doing different vitolas) of the Fausto just enough to put more of the emphasis on the flavors, and not the strength…Don’t get me wrong, the Fausto is still a (Very) strong cigar, but it is not so strong that it drawns out everything else in the profile…Think of a more balanced, smoother, richer, more flavorful, slightly creamier version of the T110, and you have what the Fausto is (at least in the FT153 vitola that I smoked for the review)…A very good cigar, a very balanced cigar, a very strong cigar, and it is made even better by the fact that it will be a regular production release…