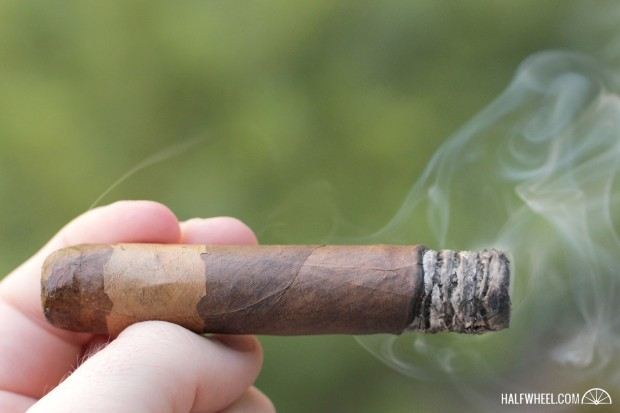 In October 2010, Tatuaje released its third installment in its Monster Series: The Face. It was a significant release for a couple of reasons: first, it was the first “modern” monster to be used for the Monster Series project, following the release of The Frank (2009) and The Drac (2010); second it featured a new, smokable band that didn’t bear the Tatuaje name but instead made reference to the monster it was named for.

The film’s premise revolves around Jed Sawyer, who as a child wore a leather mask to hide facial deformities and tumors, only to replace it with a mask made out of human skin later in his life. He and his cannibal family use sledgehammers and chainsaws to kill their victims, unsuspecting visitors to the rural Texas area where they live, using their flesh for meals.

Pete Johnson of Tatuaje replicated the Leatherface mask by using a piece of Ecuadorian Connecticut tobacco in place of a band, a somewhat jaggedly cut piece of leaf that does a fine job conveying the cigar’s relation to the movie. In addition, the original Tatuaje The Face was packaged in brown paper—similar to that of butcher paper—with a burlap band in place of a ribbon, all in a jagged and blood splattered wood box. 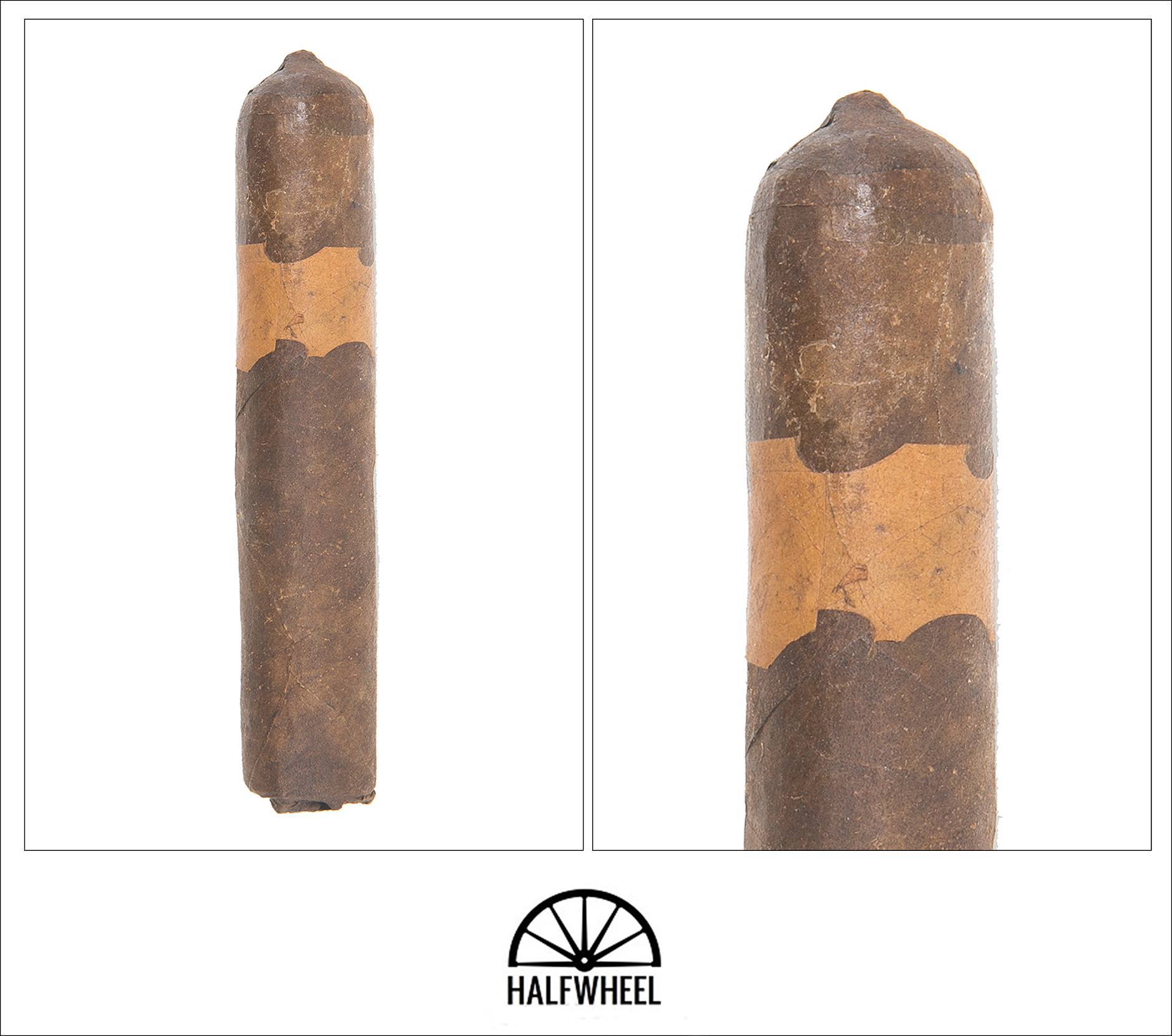 There are two parts of the Tatuaje Face that I feel compelled to check first: the unfinished foot and the tobacco leaf band. On the first cigar smoked, the band seems a little bit uneven and placed a bit higher than on the others, though I’m not quite so concerned with the cut as a bit of variety only lends to its authenticity. The foot has some variation as far as the amount of tobacco hanging off the end; on the first cigar it isn’t quite entirely closed, but seems to get about 80% of the filler covered, while on another sample it’s completely covering the foot and there’s a good bit sort of dangling off the end of the cigar. The cigar itself is smooth with an interesting color to the wrapper leaf that reminds me a bit of the rosewood and walnut woods I recall seeing some humidors made from. There is hardly a vein on the wrapper, and the ones that are there are so small that they are barely noticeable, but there is a good bit of toothiness and a slight sheen from the leaf’s oils. Only one cigar showed its seams and none had any visual issues beyond that. There’s a touch of give to the cigar, not a lot save for just one spot that shows more give than the rest. The pre-light aroma shows a leading note of tobacco that has notes of dry leather, soil and dry wood, while the cold draw is spot on as far as air flow, with a faint soil note coming through along with some sweet pepper and leather.

It seems that that the amount of wrapper leaf covering the foot has a pretty substantial impact on the cigar’s beginning; the first cigar that I smoked didn’t have much and as such the few puffs of aren’t terribly peppery on the palate; with the second cigar, the increase of excess wrapper leaf at the foot delivered much more in the way of sweet earth and pepper. Either way, a breeze that put some of the smoke back in my face lit up my nose with plenty of black pepper picked up, again with just a touch of sweetness. There isn’t quite as much on a subsequent retrohale though, with notes of dry soil, white pepper and a subtle sweetness. There was some variance in how long it took the flavors of the Tatuaje Face to really start to open up, but when they do, expect a hearty helping of Mexican terroir, and a good showing of it that has become fairly synonymous with the leaves used by the My Father Cigars S.A. factory. Through the first third the technical performance has been great, with a straight and even burn line, and tight ash with distinct puff rings that holds on well past an inch in length. The flavors continue to be led by a slightly dry earth note that delivers plenty of stimulation on the palate, with pepper coming and going, never reaching overpowering levels but consistently making its presence known. 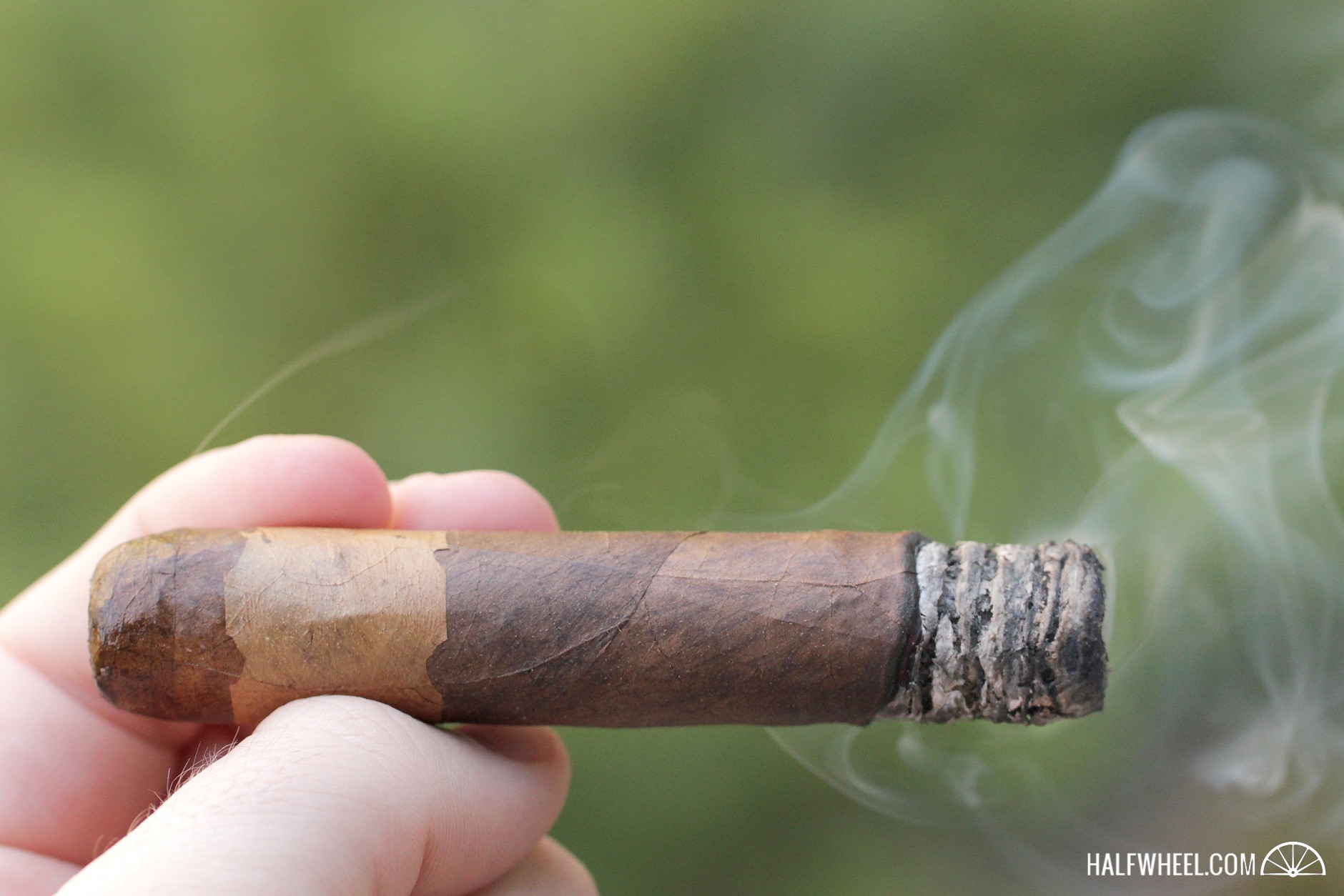 I’m surprised by the sweetness I find in the cigar, often a follow-up to the earth and pepper notes that are a bit more prominent, which in turn creates an interesting back-and-forth between the somewhat grittier soil note and the subtle chocolate sweetness that comes after it. The core flavors of the Tatuaje Face start distilling and intensifying by the midway point, almost becoming too focused at times and not leaving space for the blend to breathe or have any complementary notes added. A retrohale just past the midway point shows a lighter profile that is very manageable, still with a bit of soil and pepper but not in the same quantity or intensity as what the palate seems to get. The burn has by and large been good; the one time when the burn line got off-center, it corrected itself quickly to progress evenly by the midway point. 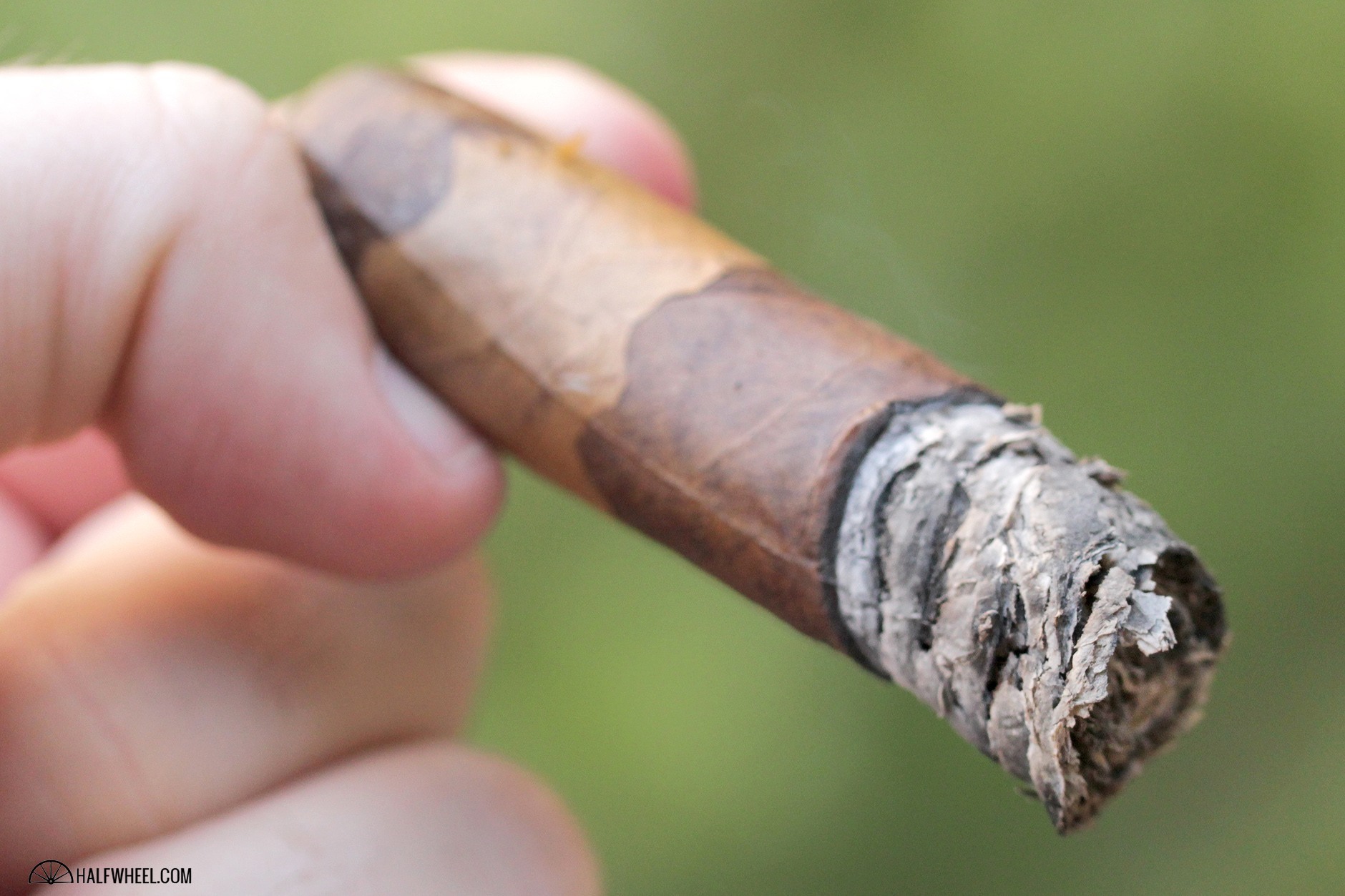 The final third of the Tatuaje Face is marked by a distinct sweetness that has me thinking brown sugar as well as a touch of grill to it—not grilled meats mind you, but the smell of an actual grill after it’s just been used. There is still a good bit of pepper left in the smoke, particularly when you allow it to sit in the mouth for a beat or two. A note of peanut butter jumps in as the burn line crosses the band, and while it’s in the background of the overall profile, it’s still fairly intense. The retrohales have picked up a pinch more pepper, still very manageable but a bit more upfront and pointed than they had been earlier in the cigar. The cigar continues to perform well both technically and flavor-wise, until the point when the heat simply overtakes the flavors and it’s time to put the cigar to rest. 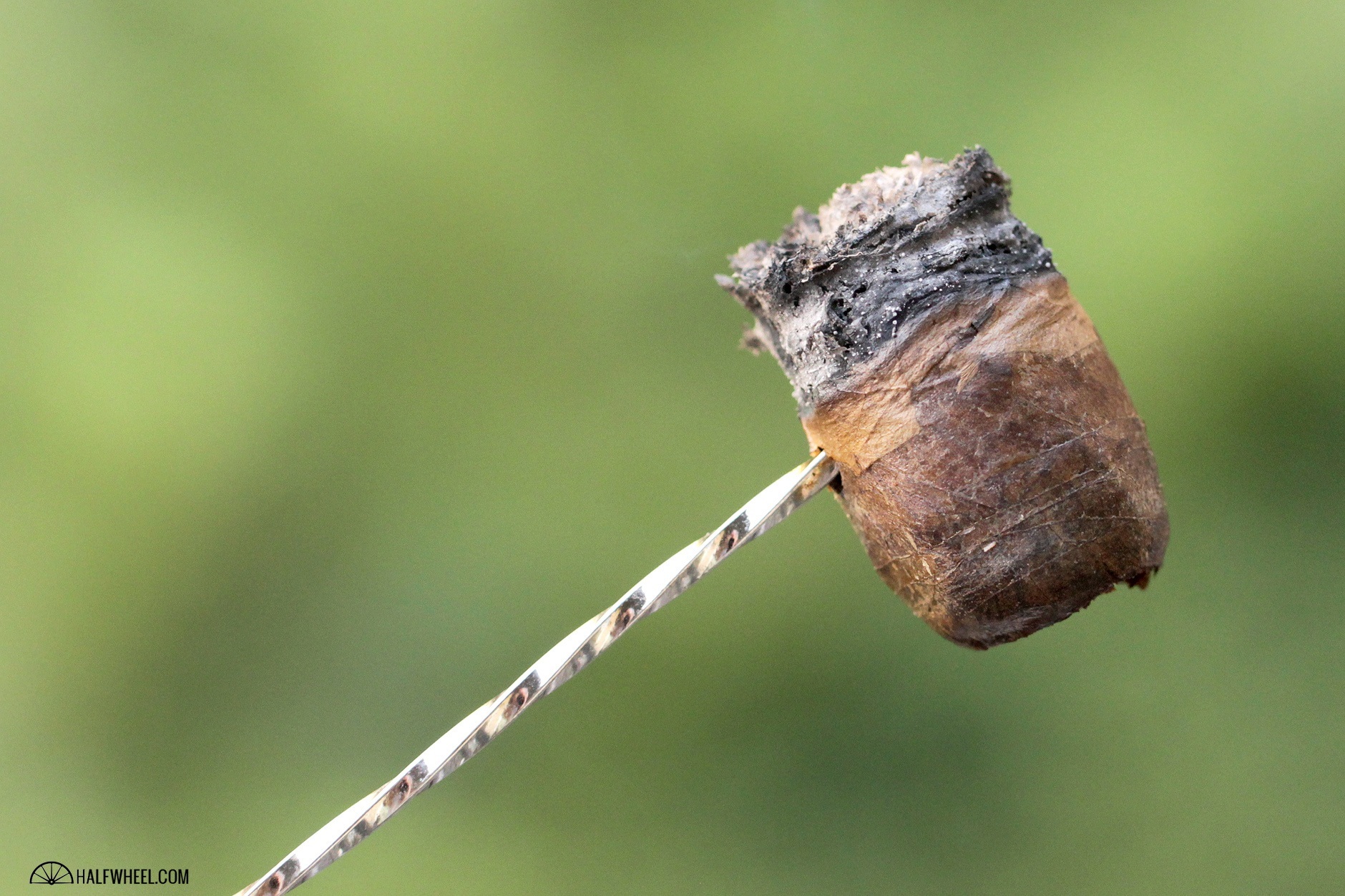 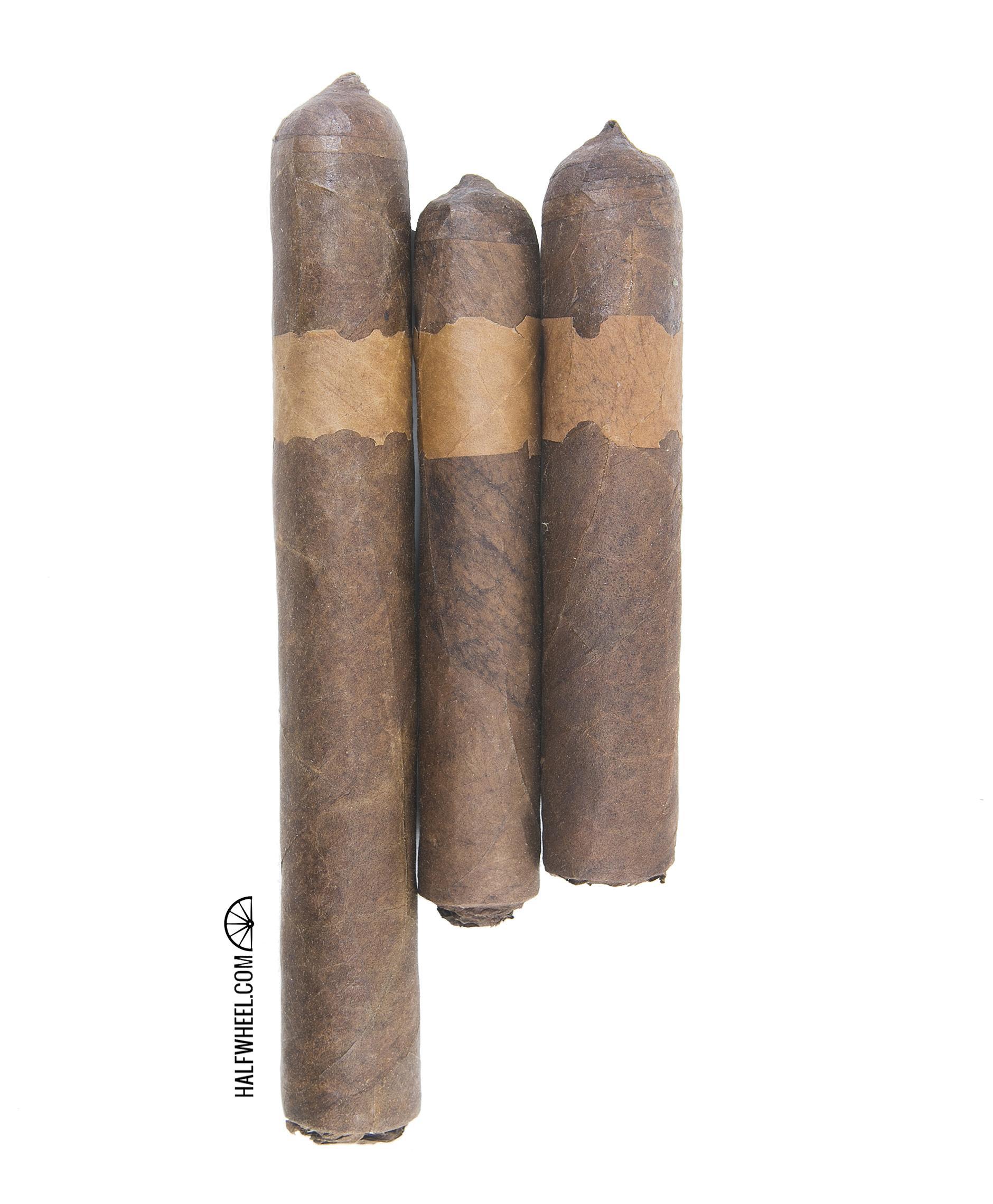 I'd forgotten how good the Tatuaje Face blend can be, combining a strong and somewhat unique showing of Mexican San Andrés with backing notes of pepper and sweetness that alternates between chocolate and peanut butter to create some complex flavors that hit my palate in nearly all the right places. The big ring gauge leaves a bit lacking for me, and I certainly don't think it's better than the Baby Face's smaller ring gauge, both in terms of what that cigar offered in flavor as well as mouth feel. But that aside, the Face is a remarkably enjoyable cigar in a bit shorter and much more readily available format than than original.