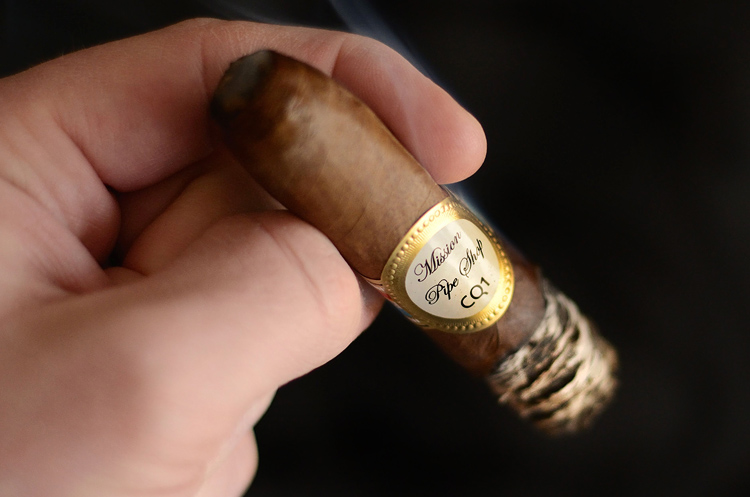 Today our review will focus on another one of Pete Johnson’s single store Exclusive Series releases called the Mission Pipe Shop CQ1, which was made for Mission Pipe Shop in San Jose, Calif. Back in November of 2012 we had the story about its official unveiling although some details had been floating around the Saints & Sinners forum for a few months prior.

Since the project used Johnson’s prized Ecuadorian Sumatra wrapper the question was asked how similar it was to the last cigar that used it, the Little Boris. “Similar in blend style but I think the box pressing completes the blend,” said Johnson. As soon as I lit it, I gave it the green light.”

Another notable similarity is with the CQ1’s box—being part of the Exclusive Series—is almost identical to the Little Boris except for the size and name on the side. Here’s what it looks like. 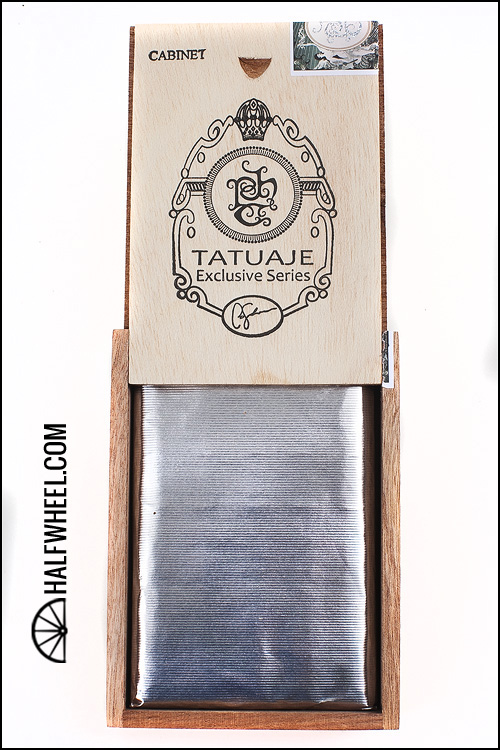 As with most cigars the first thing I noticed was the wrapper. The Ecuadorian Sumatra wrapper on the CQ1 looks a little gnarly though not as much as the Monster Series’ wrappers are made to look. That combined with the box-press gives it a bit of a rustic edge to it. The mottled wrapper is smooth and slightly oily to the touch. There is a little give near the foot, but otherwise the cigar is firm and appears to be well-made. Finishing off the whole look is a covered foot, which I always think is a nice touch. On the cold draw I get sweet cocoa notes and the aroma coming off the wrapper is a mild but pleasant barnyard smell.

The first third starts with sweet milk chocolate, leather and a touch of espresso all rounded off with just the slightest bite of pepper. The draw is good—though maybe a touch on the loose side. After just a few puffs the pepper fades even further into the background while the leather and espresso notes really start shining through. There is plenty of billowing white smoke to accompany the overall smooth creamy nature of the flavor profile. Right now—I would call the CQ1 more sweet than spicy. The ash holds easily to over an inch and is a very fascinating light gray on black color pattern. With the second third comes another shift of flavors with the pepper coming out more and a sweet cinnamon note, almost like Red Hots candy, dominating the profile. The leather is still there but the milk chocolate and espresso have faded to only minor notes. Towards the end of this third the cinnamon and overall sweetness has also faded leaving a woodsy taste to accompany the pepper and leather. The final third continues strongly with the pepper, leather, and woodsy notes. Overall the profile is still very creamy though the sweetness has all, but disappeared. The cigar has required a few minor touch ups here and there, but I’m guessing this can be attributed to the fact I’m smoking it right off the truck. The recent Sumatra wrapper Tatuaje uses has been a favorite of mine. It works well with each cigar he’s used it on and the CQ1 is no exception. The overall sweet and creamy profile with peppery undertones creates a very sublime smoking experience playing perfectly off each other. As with pretty much every Tatuaje product I've ever smoked the construction is always spot on as well making this a well rounded cigar. With many of Johnson's limited releases, the downside more often than not is availability and ease of obtaining a box. If you can find a box however, whether directly from Mission Pipe Shop or on the secondary market, this is an easy choice in my opinion for a box purchase.