Jerry Cruz was still working for Stogie Review, Brooks Whittington was writing news stories for halfwheel—what a time 2013 was in the cigar world.

In an interview with Stogie Review that spring, Tatuaje’s Pete Johnson mentioned that he was planning to release La Petite Église, an event-only cigar inspired by the Flor de Cano Short Churchill, a short-lived Cuban cigar.

A few years later, in 2018, Johnson announced that he was planning on releasing two cigars with the Église name—Petite Église and Clos L’Église—as European exclusives.

By 2019, the cigars had moved into a new idea: Escasos. Tatuaje’s Escasos Collection is a much-talked-about return to the company’s roots, specifically making cigars at the El Rey de los Habanos factory in Miami. Technically, the factory is now part of My Father Cigars, Inc.’s operations in Doral as opposed to the original Calle Ocho location, but it has continued to make a limited selection of Tatuaje’s Brown label offerings over the years.

Escasos is the latest in a number of attempts from Johnson to become more involved in the Miami factory, but this one is decidedly different. It has two parts—one is a special version of the original six sizes of Brown Label that can be found at stores nationwide—and the others is a quartet of high-priced cigars that few people have seen. 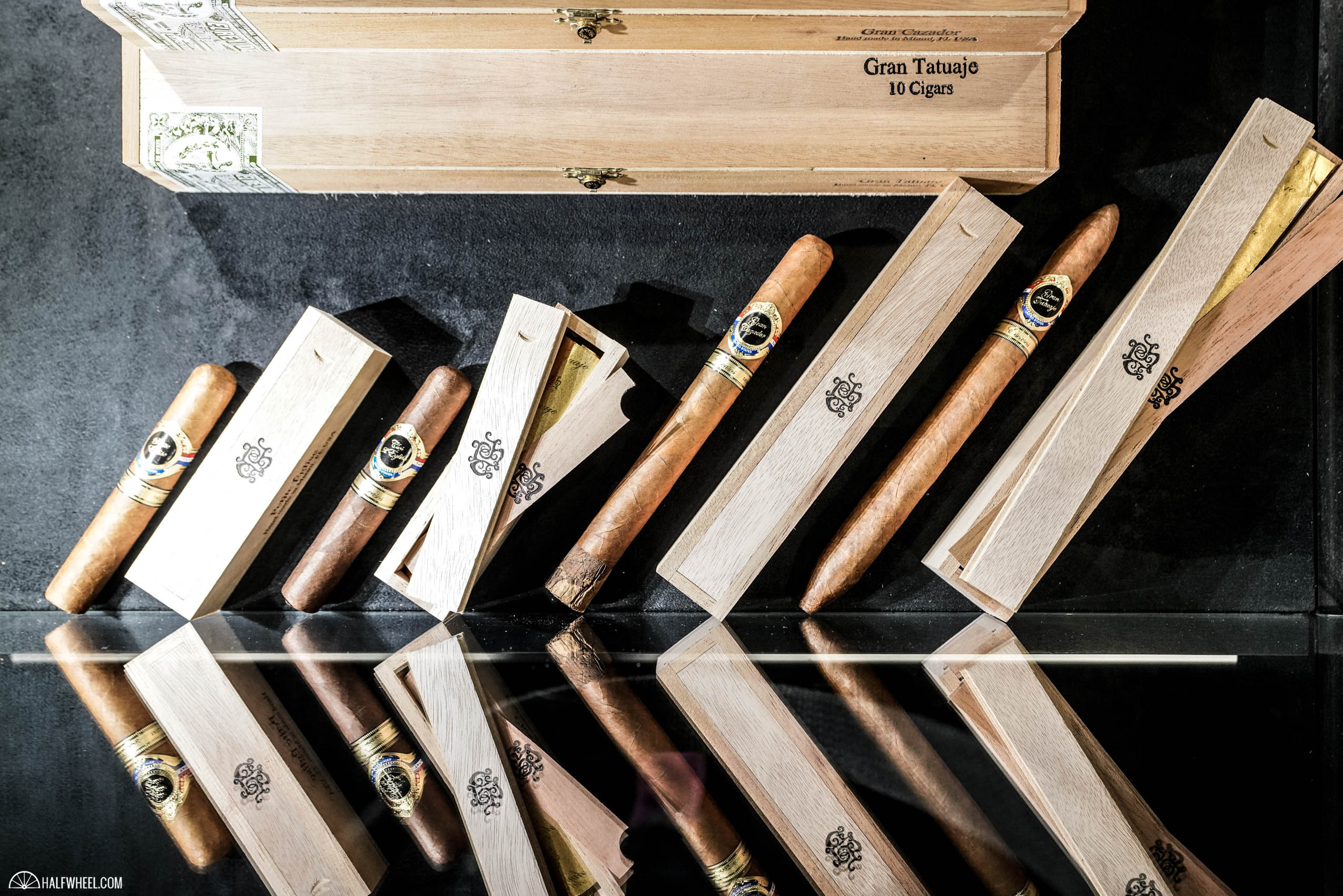 The latter is where the Église cigars live, joining two other rather large and expensive cigars.

Of note, that pricing is what we paid from UpDown Cigar in Chicago.

They began shipping in November 2019 to just three stores:

Like many Tatuajes before it, the name is inspired by wine, specifically Château Clos L’Église, a winery in Bourdeaux.

This is not your normal Tatuaje and that starts from the beginning. Rather than cellophane, the cigar is packaged in a coffin, which itself is not that uncommon. But it’s wrapped in a piece of Tatuaje-branded gold paper that once removed, offers an immediate reward. The Tatuaje Clos L’Eglise is a great looking cigar highlighted by a dark wrapper with a fair amount of oil and quite a bit of toothiness. Surprisingly, I don’t smell much from the cigar, just sunflower seeds and leather off of the top leaf. The covered foot is also quite mild as far as the aroma goes: slightly sweet with some raisin and leather. Even on a normal cigar I’d say the cold draw is slightly open, but given the covered foot, it’s very open. That being said, the flavor is pleasant: a medium-full mixture of floral, some saltiness, pistachio and bread.

The Clos L’Église starts with a lot of chocolate before shifting to a dry earthiness, some leather, dried cranberries and the faintest hints of pepper, though the full pepper effect never comes. An inch in and chocolate remains the core, joined by a distinct burnt popcorn, some saltiness and some kiwi. Retrohales bring an interesting earthiness that’s different from the earthy flavor I pick up on most cigars. There’s also some caramel, a bright oak flavor and some smokiness. It’s almost like someone took a Scotch whisky, deconstructed it and then put it back together in some bizarre manner. The finish has lots of burnt popcorn, a bit of black pepper and some drier popcorn flavors. Flavor is medium-full, body is full and strength is medium-full. The flavor is super thick, and while not the strongest in intensity, the way that it coats the mouth is heavy. Construction is decent, but not flawless. The ash falls off much earlier than I would have expected, right around the half-inch mark, and I find it necessary to touch each cigar up before the first third comes to close. While the open draw tightens just a bit, it’s still noticeably loose for the size and is certainly having an effect on how I’m able to smoke the cigar.

At some point around the middle of the cigar, a toastiness takes over the Clos L’Église, overwhelming most of the other flavors I can detect in my mouth. At times there’s some chocolate, other times a bit of a rum sweetness and oak, but I really have to go searching for those other flavors in a manner much different than the first third. Retrohales deliver a lot of nuttiness on top of a watered-down rum flavor and touches of dark chocolate. After the halfway mark, a dry creaminess takes over as the main part of the retrohale and eventually drowns out the nuttiness. The finish reminds me of finishing a Drumstick ice cream cone with a mixture of chocolate, creaminess and nuttiness. All of those flavors are drowned out by a big saltiness and, in the latter portions, an intense creaminess. While there was some pepper on the lips in the first third, it’s nothing compared to the second third where the cigar is stinging my lips in a significant enough manner that I feel it’s worth mentioning. Flavor is medium-full, body is full and strength is medium-full. Construction is fine, though at times the smoke production gets a bit anemic, with a few double puffs bringing it back to a solid volume.

The final third of the Tatuaje Escasos Clos L’Église sees a return of the Scotch whisky-like flavors, once again deconstructed. The saltiness from the second third picks up in intensity, which provides a unique accent to the toasty and oak mixture that is there. Unlike the middle portion, there are some easily identifiable secondary flavors including a root beer sweetness, some creaminess and dried apricots. Retorhales have more grains and a bit of a mineral flavor. The finish has ground taco meat, some grains and a bit of black pepper. Flavor is full, body is medium-full and strength is medium-full. Construction remains okay until the end, though I find myself needing to touch up the cigar due to weak smoke production. Once again, I suspect that this is due to the open draw.

At times the Tatuaje Clos L’Église can be a very good, incredibly rich cigar. But for much of the time I smoked the cigars, that just wasn't the case. The first third is borderline excellent, but the final two didn’t keep that up. I suspect the tobacco itself is very good and the open draws just prevented it from showing its true potential, which would explain the inconsistencies in terms of what the flavor delivered. Even with the hefty price tag and the inconsistent performance, I still want to try the rest of the Escasos Series. The idea of a company like Tatuaje trying to produce halo-type products with the best of its best is eventually going to lead to a cigar that truly is one of the best cigars on shelves today.