Among the many projects Pete Johnson had brewing at the 2014 IPCPR Convention and Trade Show, one of them was a special event cigar called the CiGWAR. This limited release was destined for the GWAR B-Q, an event put on by the costumed-heavy metal band GWAR on August 16, but some details have changed since Johnson first talked about the release.

Johnson originally mentioned that there would be 1,000 three-packs made available as part of the event, and indeed there were, with the packs that were not sold at the event available to the public the following Monday via Havana Connections in Virginia, who was also a vendor at the GWAR B-Q and who seemed to go through what supply they had very quickly. 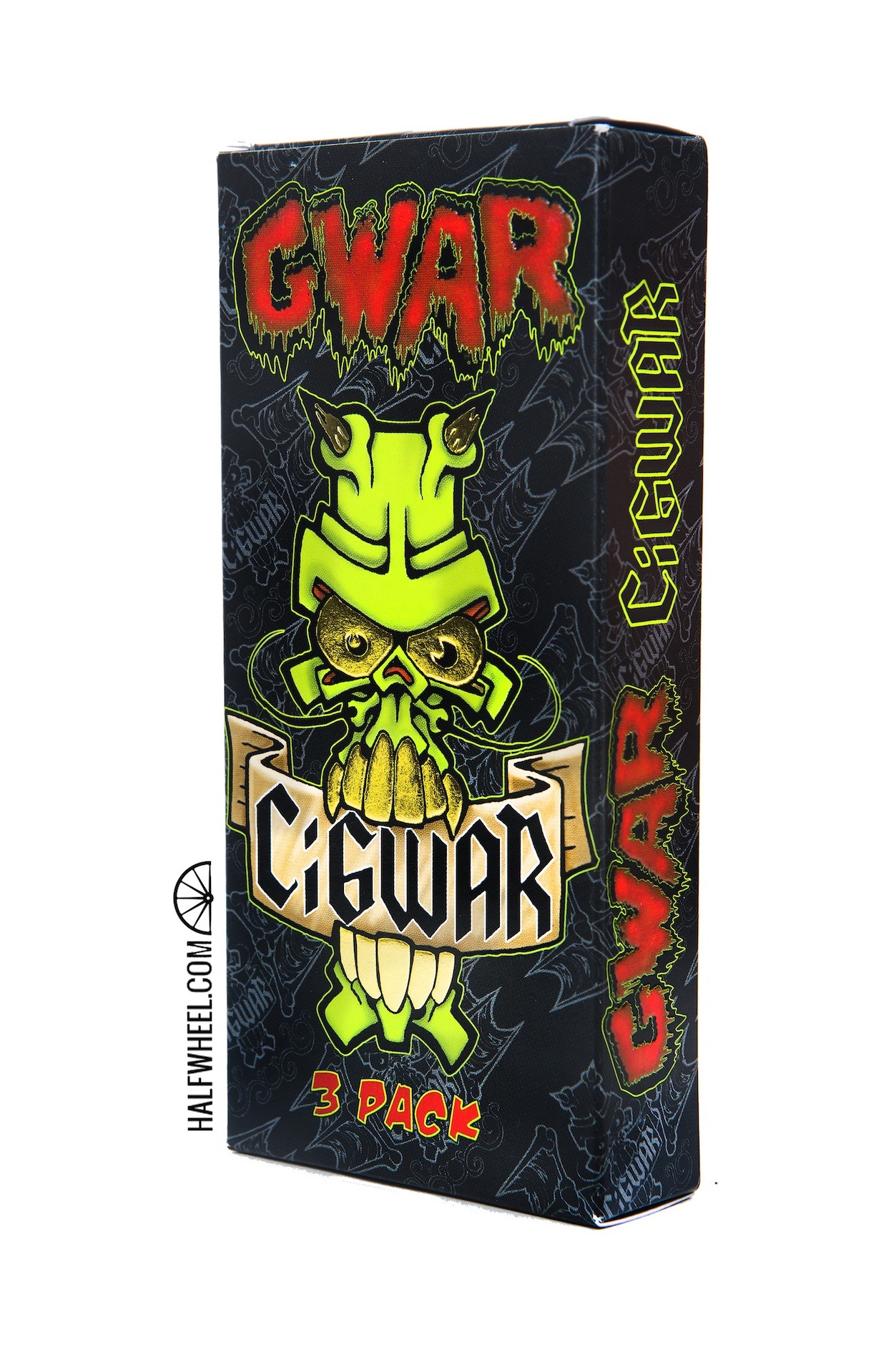 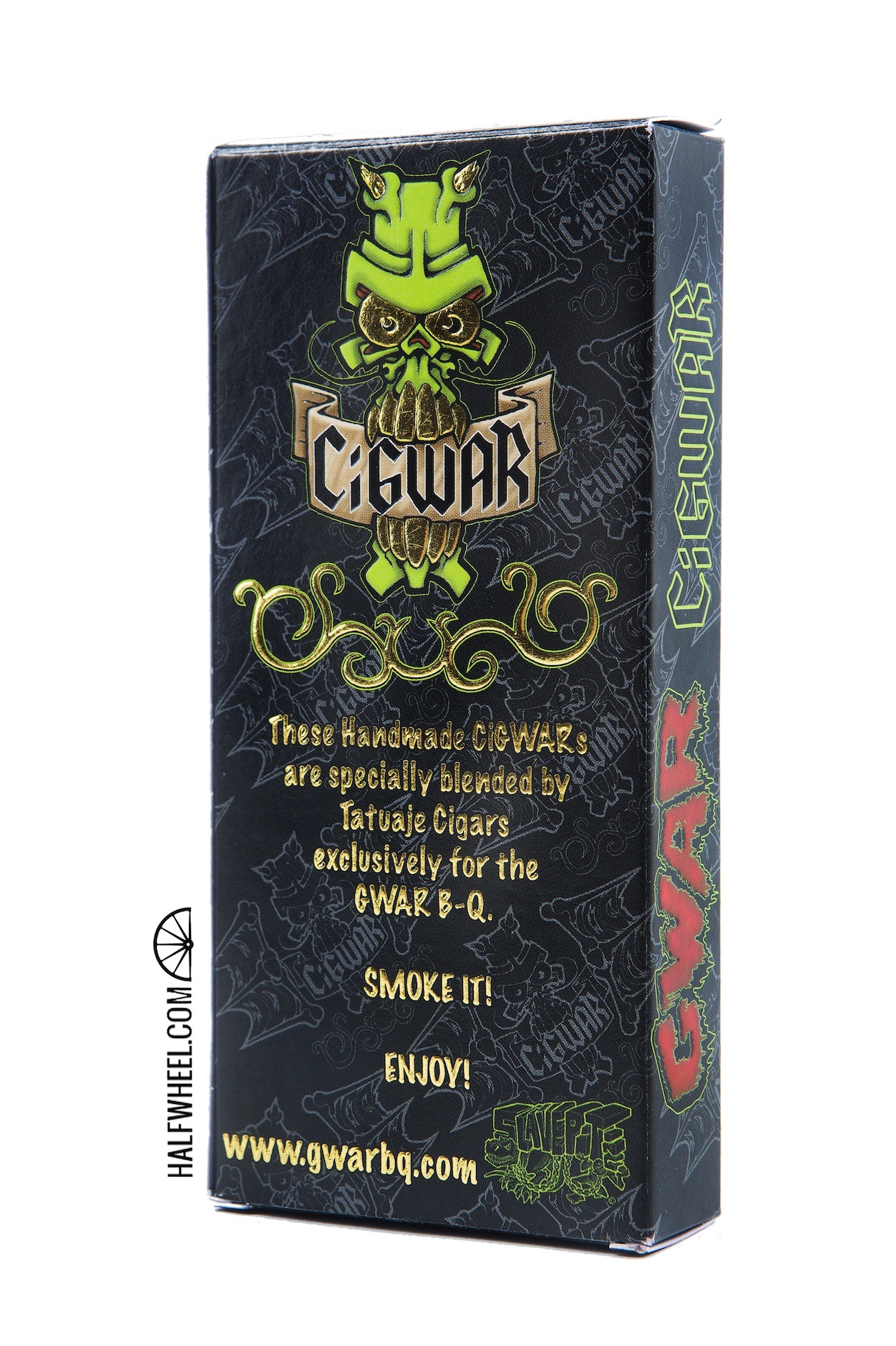 In early September it was announced that a second batch of the CiGWAR would be released, which while not made public prior was part of the originally planned production run of 10,000 cigars. Johnson said that there were 3,000 of the three-packs produced, with another 1,000 cigars made for single stick sales in store, on tour and for the band members to smoke.

As for the cigar itself, it uses a Connecticut broadleaf wrapper over Nicaraguan binder and fillers, and was blended based on feedback the band gave Johnson after smoking the Little Monsters sampler. He added that he blended it to be something he enjoyed smoking and “seemed fitting for the theme of the cigar,” adding that it is built to be “well-balanced and medium to full.” The first two CiGWARs I smoked both had a toothy wrapper, darker that medium brown but not a shade that’s particularly eye catching, and has a fair amount of veins with the largest being big enough to create a bit of a ridge on the cigar. The third cigar was a different story, with a very dark brown wrapper and a good bit of crystallization that catches the light beautifully. While I’m impressed by how well the foot is covered on the first cigar, I’m also a bit surprised by how the cap was applied, with a decent size strip of tobacco hanging off of it. The second sample is better but still seems a bit inferior to the quality level I’d expect to see on Tatuaje’s other offerings, while the third is much better. The band also deserves a mention; certainly unique and distinctive, though I can’t help but feel it doesn’t show the level of detail that the box does because of its smaller size. In terms of firmness, it ranges from being a bit on the soft side to downright soft in spots, showing more give than I would expect for a Tatuaje release or something coming out of the My Father factory. The pre-light aroma was incredibly neutral on the first sample, so much so that I thought my sense of smell might have been compromised. The second and third cigars offered very subtle suggestions of what I could call coffee, earth or wood, with the impression not strong enough to commit to one of them outright. The cold draw feels a bit tight, though I have a feeling the covered foot might have something to do with that. Again, it’s fairly neutral but offers a flavor of Cheerios; a common cereal grain that is immediately familiar, if not a flavor just slightly heavier but still similar, with the third cigar showing a mocha note that I didn’t get from either of the other samples.

The first puffs of the CiGWAR are fairly mild and neutral, though the cereal note is certainly present and distinguishable, while the first retrohale is very passable with little pepper or spice, though the third cigar shows a nearly completely different profile than the first two. It’s the strongest of the three and shows notes of earth, a bit of charred wood My first puffs also reveal that the covered foot affected the cold draw, as the draw is a bit more open than it was prior to lighting. The smoke production early on is a touch thin for my liking but picks up fairly steadily, while the burn is good and the ash holds on for more than an inch before crashing to the ground. Some samples showed a touch more sweetness than others, particularly in the aroma, giving off a note that this was a very approachable cigar and one that would appeal to novice smokers, while the third and fullest sample started to pick up a bit of peper with it showing up primarily in the retrohale. Towards the end of the first third, the smoke becomes a bit creamier and brings in a touch more body, developing a light coffee note in the background that will be familiar to fans of lattes, with a bit of a lingering coffee aftertaste. 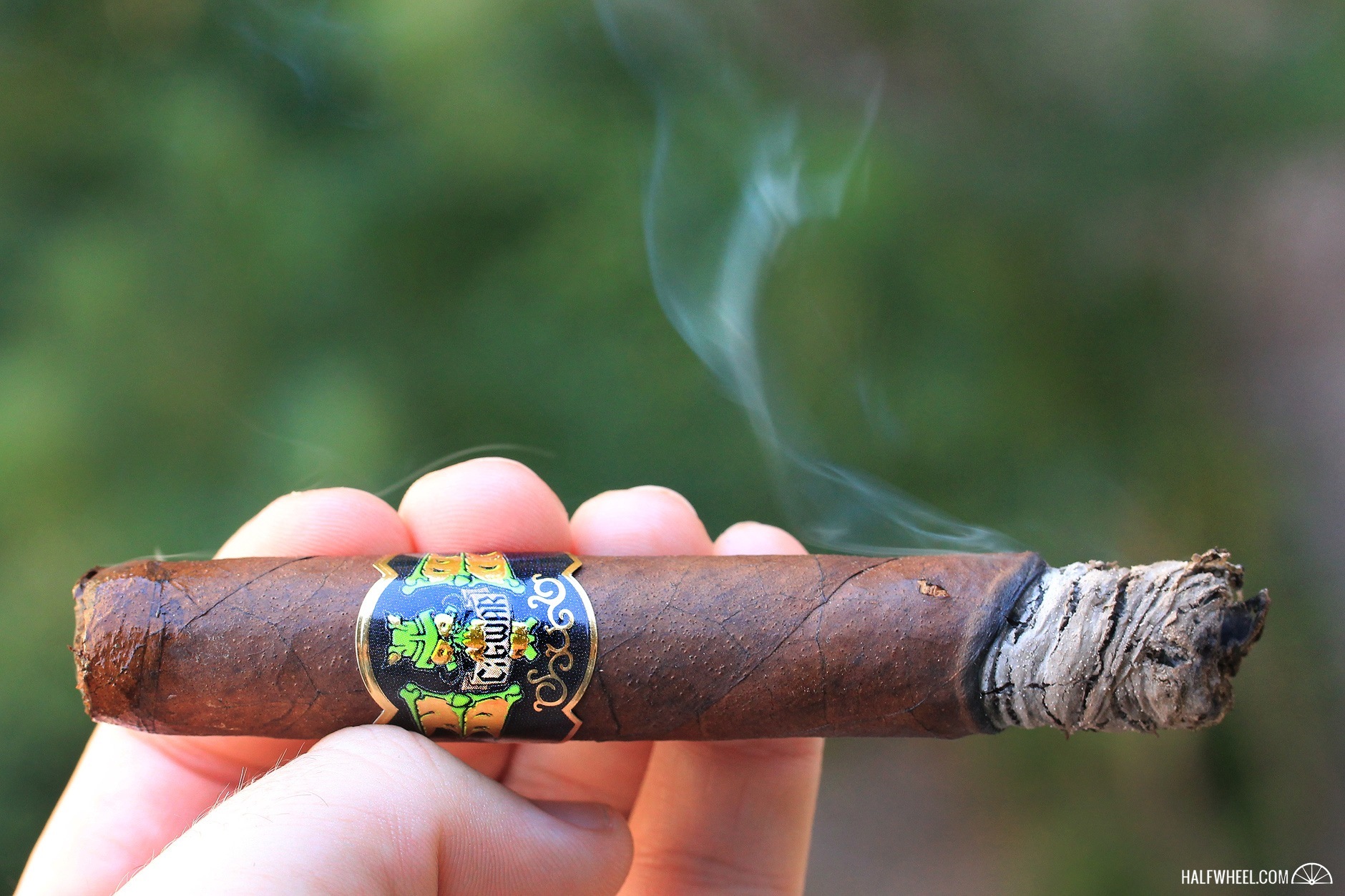 The tale of two CiGWARs continues into the second third; in the first and second samples there isn’t much change in the way of flavor, though the coffee note becomes a bit more prominent and the strength slowly upward as the burn line gets closer to the midway point. In the third sample, the pepper becomes more noticeable on the tongue, retrohales remain a bit challenging, and there is enough flavor development to warrant calling this a balanced cigar. Touches of wood start to come out in varying intensities once the burn line enters the second half, never dominating the flavor but adding to it. The CiGWAR continues to perform very well with an even if not perfectly sharp burn line, plenty of smoke and ash that holds on well. Again, the variance from cigar to cigar in terms of strength is striking, with the first staying fairly mild from the start, while the second and third showed a much more linear and detectable increase in strength. 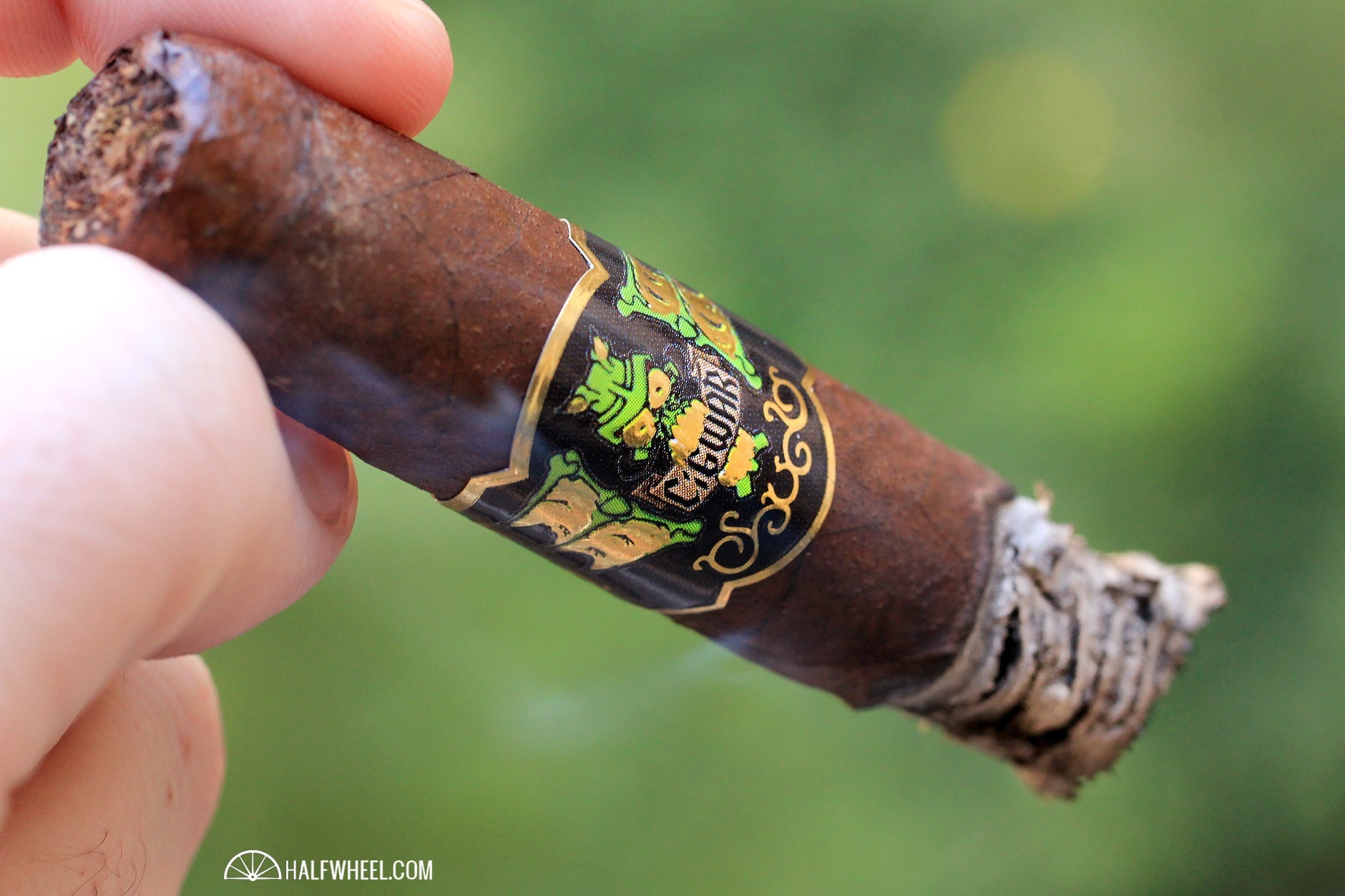 In the more flavorful samples of the CiGWAR that I smoked, there’s a good bit of increase in strength heading into the final third, with the draw tightening up a bit, the smoke becoming a bit denser and the flavors tightening up as well. On the mildest sample, it’s still not a flavor bomb, but some subtle hints of white pepper start to emerge from the background and the cigar makes its first attempt at showing some signs of complexity. On the samples that show a fuller body, things continue to inch forward nicely, with the coffee, wood, earth and pepper notes coming together well without any sense of being overpowering. All three samples showed continued change in the final puffs, though when the smoke gets so close to the eyes an the burn line being so close to the lips, it produces a bit of a negative reaction in the former with some scorched notes on the latter. 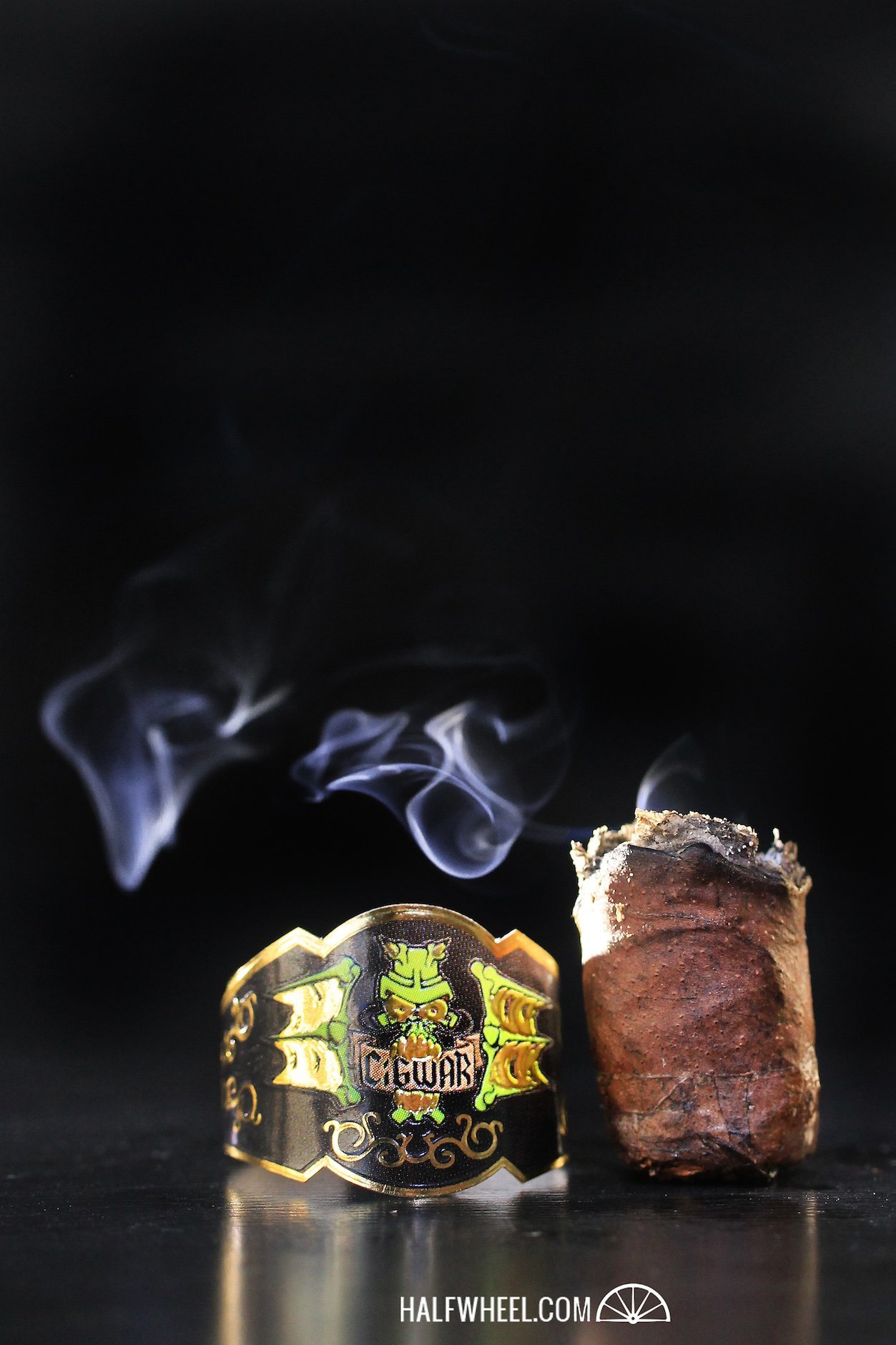 If you're looking for a great limited edition Tatuaje release that will deliver mind-blowing flavors, I regret to say that I don't think this will deliver on that hope. After one cigar, I was surprised by just how mild the first cigar was, so much so that I was questioning how well my senses were functioning and e-mailed Pete Johnson to get a better understanding of the blend, though I did make a note that it would make for a really enjoyable morning cigar. After the second and third cigars, my attitude changed a good bit, particularly with the range in strength that the three cigars presented. In the end though, while the CiGWAR is enjoyable, it falls into the category of being a cigar that comes with a premium price tag that doesn't deliver the premium flavors I've come to expect from Tatuaje. For collectors this is a no-brainer; for the rest of us there are plenty of other better Tatuaje options at your nearest retailer.