Pete Johnson’s annual Halloween release has turned into a bit of a guessing game for fans of the line, and by and large he’s kept the release a fairly good secret, generally saving it for the industry’s annual IPCPR trade show every summer. As people began to wonder what movie monster Johnson might draw from for a future release, one name that kept getting brought up was Chucky, the children’s doll-turned-raging murder made famous in Don Mancini’s Child’s Playfilm series. In addition, talk of a companion cigar—Tiff—also began to circulate. Those rumors were quickly debunked by Johnson, though they weren’t entirely false. Chucky would be used as the inspiration for a different type of Monster, a Pudgy Monster.

In February, Janny Garcia of My Father Cigars posted a picture of an unbanded cigar with the caption “Smoking my Tiffany!!!” and a #monsters hashtag. It seemed like Chucky and Tiffany would finally be getting cigars made in their image, and in early April the project was confirmedwhen it was brought to the Tobacconists’ Association of America annual meeting.

While Johnson initially declined to confirm the Chuck and Tiff blends, he has told halfwheel the Chuck uses an Ecuadorian habano wrapper over Nicaraguan binder and fillers. The Tatuaje Chuck is an attractive cigar both in stature and color; the former is familiar due to the ring gauge but also eye catching because it is an inch shorter than a standard robusto. Despite a fair number of veins, the Ecuadorian habano wrapper does it best to appear as smooth as possible with an equally smooth texture, marked by a tactile sensation of low-pile velvet. Each cigar smoked is firm to the touch but not without the slightest bit of give. The pre-light aroma comes across as almost stereotypically Nicaraguan with notes of terroir and pepper, an earthy and soil driven first impression with subsequent samples adding a sharp and dry note of freshly cut lumberyard wood and a bit of sawdust. The cold draw ranges is on the firm side with distinct notes of pepper that span from black pepper to a more red chili pepper taste that offers a Sriracha-like kick.

There is way more pepper through the nose than what is offered for the palate, though that doesn’t mean the tongue gets left out of the fun and depending on which the way the air is moving, your eyes might even be in for a bit of a treat. While I knew what this was prior to lighting it up, I don’t think that’s why it made me think of the flavor as being almost distinctively Tatuaje, but it’s this type of flavor I tend to associate with the brand. Strength is a good bit beyond medium and toes the line to outright full before a half of an inch has burned. Not surprisingly, retrohales offer good amounts of strength and pepper that will likely prove challenging for many. 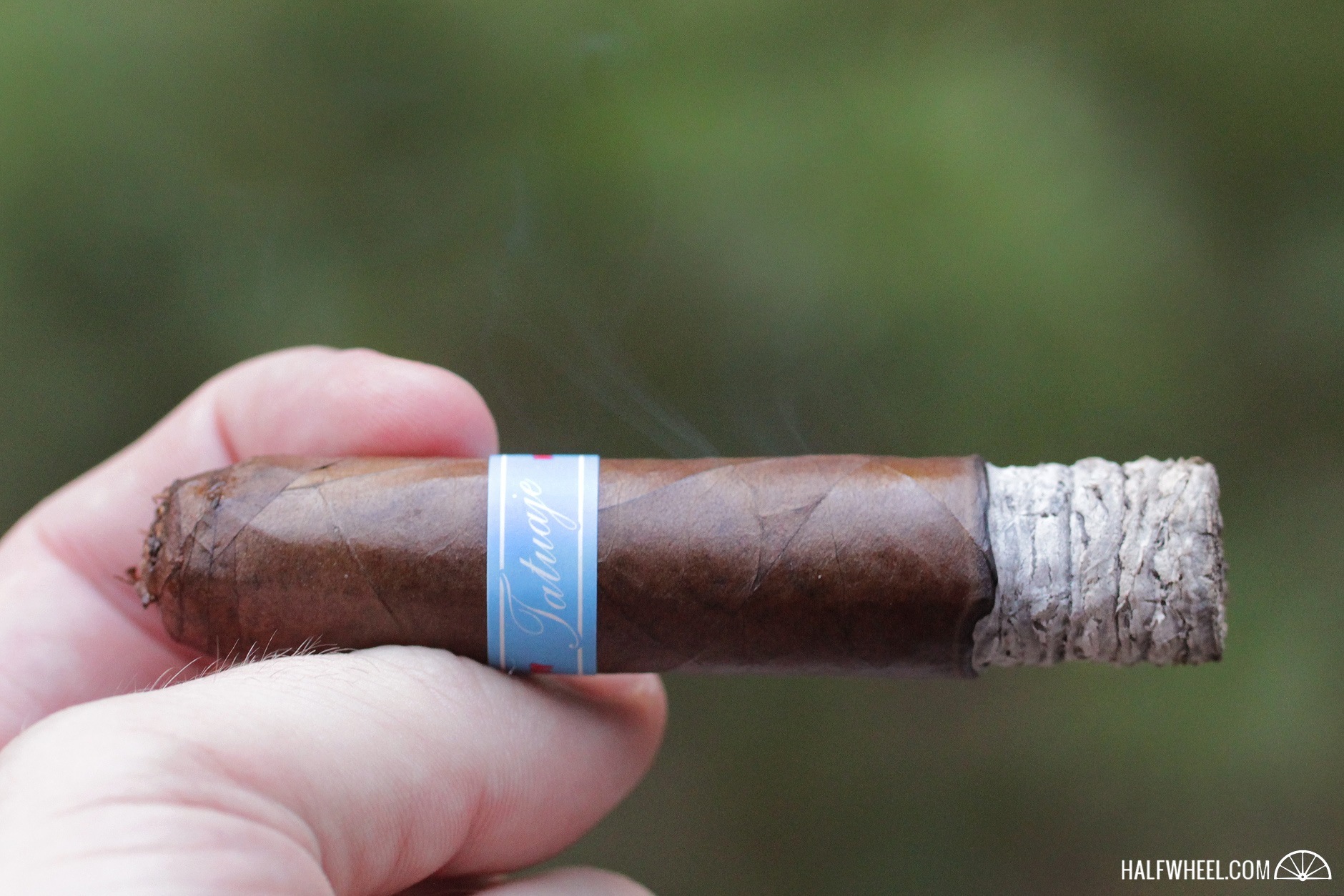 While the flavor progression is fairly linear, it’s the goregous white ash that is packed tight which catches my eye. On each of the three cigars I smoked for this review, without wavering the ash holds on until about the midpoint when it finally releases its grip, and another big clump starts being built almost right away. The pepper dies down on the palate just a bit as the smoke continues to be thick and plentiful; in place of the pepper is a note almost equal parts earth and well cooked steak that shows a subtle shift but keeps the strength well above medium. Retrohales continue to offer intense amounts of sharp pepper that are enjoyable in only the briefest of amounts, and even from the ambient smoke it’s the nose that continues to get most of the pepper from the Tatuaje Chuck. The final third, which seems to come on fairly quickly, sees a quick dip in the strength of both the flavor and pepper before quickly picking up where it left off, as well as adding a new type of bite in the flavor that is hard to put a name to or criticize, so I feel comfortable just calling it straight, strong tobacco. One thing that is distinguishing about it is that it now tingles the lips more than the palate, a bit of a different sensory experience than what the Tatuaje Chuck has delivered to this point. The rapidly amount of unburnt tobacco left to hold onto has me digging out a draw poker to assist in getting as much out of this petit robusto as I can, with the flavors staying strong but manageable all the way down to the final puff. Each sample has burned and performed flawlessly, with only the smoke production slowing down a bit in the final third. After my first go with the Tatuaje Chuck, I wasn't overwhelmed by what it offered, and quite frankly it had me jotting down notes of good but unexciting and putting it into the category of being a cigar I would smoke again but wouldn't necessarily chase down. The second cigar more or less maintained that feeling, but it was the third that seemed to have just a bit more pepper and a bit more character that bumped up my opinion of it a good bit. Given that bit of variance, I'm a bit unsure of what the true profile of the Tatuaje Chuck is, but at its most basic level it's a good, strong and peppery offering that will easily satisfy fans of both Tatuaje and strong cigars in general, with the potential to only get better and more distinctive from there.