Continuing our IPCPR 2011 reviews, today we take a look at the Tatuaje Avion. Avion is box-pressed perfecto that is a one vitola extension of the Fausto blend. The blend for Fausto and Avion is based off of the Tatuaje T110 that was a limited release for R.Field Wine Co. in Honolulu, HI in 2009.

In a recent Stogie Review IPCPR video, Pete Johnson described the blend as:

high power, high strength but balanced on the palate, full in your stomach but soft and sweet on your palate…

The plan for Avion is to release one new size each year for three years and all three will remain in regular production, just like Fausto. Each size will be named for the year of its release with this year’s being Avion ’11. Avion come in boxes of twenty and MSRP is $9.95 each.

The sizes for Fausto and Avion are: Due to its appearance, the Avion didn’t remind me very much of the T110. With the difference in branding and the change in vitola visually the seemed like totally different cigars. However, as soon as I smelled the wrapper flavor memories from the T110 immediately raced to the foreground. The Avion has the same very pungent aroma of leather and peppercorn that the T110s I’ve smoked had. At the foot the only noticeable aroma is that of dry hay. Visually the cigar is quite striking with a moderate amount of oil and a wrapper that is surprisingly smooth give the number of prominent veins.

Avion surprised me at the beginning because it didn’t open up with the same blast of pepper that I remember the T110 having. Rather, the Avion opens up with a combination of leather and earth with a just a slight hint of spice on the tongue at the very end of the finish. There is an ample amount of creamy smoke and at this point the smoke was pretty smooth even through the nose. Just as the cigar is burning past the perfecto tip is when the spice really begins to amp up.

Moving into the Second Third the spice is there although the intensity of it ebbs and flows. There is also a slight hint of cocoa on the finish along with leather and an earthy sweetness. The cigar does need a little touching up from time to time, but not so much that it detracts from the experience. The ash holds pretty consistently for about an inch at a time. Moving into the Final Third I’m enjoying the cigar but wishing that it was over. The heat index is at 101 degrees and this is definitely not the cigar for a hot day. The flavors remain consistent but meander just enough to maintain my interest. In the last inch of the cigar the spice reaches its peak and at this point is very reminiscent of the T110. 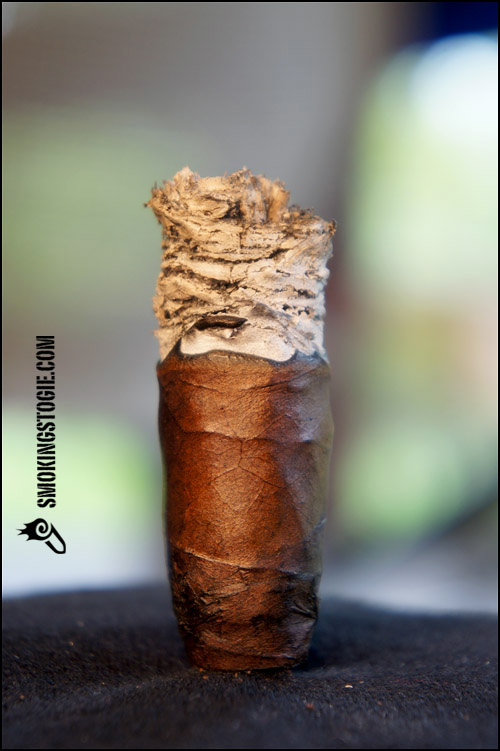 The Bottom Line: I really enjoyed this cigar. Out of the variations of the Thermonuclear blend this is probably my favorite and the score reflects that. The spice never seems out of balance and what results is a very powerful cigar that also has a nice amount of nuance and complexity. I think Pete definitely has a winner on his hands and I am glad to see these as a regular production cigar. This cigar will have a spot in my rotation but won’t be a daily smoke as I rarely smoke cigars that are this strong. If you are someone who prefers strong Nicaraguan cigars the Avion is a must try.