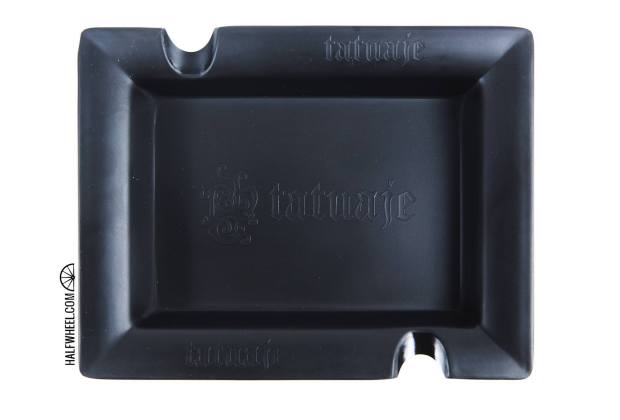 As it seems to be the trend, I’m again reviewing an ashtray today that doesn’t fit your stereotypical idea of a classic ceramic ashtray. First I reviewed two GRAMM Works ashtrays made out of aircraft grade aluminum, then I reviewed Perdomo’s Cigar Mug, which isn’t really an ashtray so much as a cigar holding device. Today I’ll be looking at an ashtray many are probably familiar with, the Tatuaje Melamine Ashtray. The first ashtray Tatuaje released was a classic ceramic ashtray, with four cigar grooves, a shiny glazed coating and beautiful metallic Tatuaje fleur de lis logos on it. When Pete Johnson had to change his logo due to copyright issues, we saw the release of some metal ashtrays with both the new Tatuaje logo and one for his Fausto series. The melamine ashtray was then released, using the same material the Tatuaje Black Label Corona Gorda 2013 jar was made out of.

For those wondering, wikipedia lists melamine resin as “a hard, thermosetting plastic material made from melamine and formaldehyde by polymerization.” As melamine resin cannot be melted, it would be a candidate for making an ashtray – something most plastics wouldn’t be too great for. It’s also quite sturdy, which puts it a step ahead of ceramic which easily breaks when dropped from even a low height. Dropping the ashtray from a few feet only produced a loud clang and the smallest of scuffs on the bottom corner where it landed. All these things are great, but if you remember from my previous ashtray reviews, there are only two things I really care about in an ashtray – how well it holds my cigar and its ash.

At 7 3/4 inches by 6 inches, the ashtray is sizable enough to manage the two cigars’ ash that might be utilizing the ashtray’s two grooves. The odd thing is though, the grooves placements are on the long side of the ashtray, meaning longer cigars don’t have as much room as they would if the grooves were on the shorter side. You might wonder, well 6 inches across should be enough to hold even a 12 inches cigar, since you balance your cigar in the middle, right? The issue is that the grooves, which are only half an inch long and a quarter inch deep, are actually slightly tilted back, so you’re forced to balance your cigar closer to the foot as opposed to the middle. The tilt combines with the very small surface area of the groove also provides very little friction for your cigar, so smaller ring gauge cigars, box pressed cigars and perfecto shapes have difficulty balancing in the groove. Wind becomes a factor too, with gusts easily blowing the cigar out of its precarious perch. Moving on to its ability to hold ash, as previously stated there is plenty of room for multiple cigar’s ashes along with another three or four finished cigars. The inch deep basin and almost 90 degree walls provide enough shelter from a mild wind so your ashes won’t blow all over your table either.

As far as looks go it’s a very classic rectangle shape that you’ve seen in ashtrays many times before, with Tatuaje on the edges and the logo on the bottom of the basin. While I’m not worried about this material scratching my glass like GRAMM Works The STAG did, I think felt feet would have still been a nice touch, though those wouldn’t be too hard to track down and put on yourself.

Overall, it’s a functional ashtray that’s durable and if you’re a Tatuaje fan then it also represents the brand in your smoking area. Priced at an MSRP of $15, it’s fairly reasonable too, as many logo’d ashtrays can easily go for twice that if not more. In addition, the item has also been used multiple times as swag and a promotional item. For me however I think I’ll be going back to an ashtray that has a little bit more substantial grooves, as I prefer to set my cigar down without having to perform a balancing act every time.

halfwheel has acquired these ashtrays in a number of ways. In the interest of full disclosure, Pete Johnson of Tatuaje has given us at least one ashtray without charge.