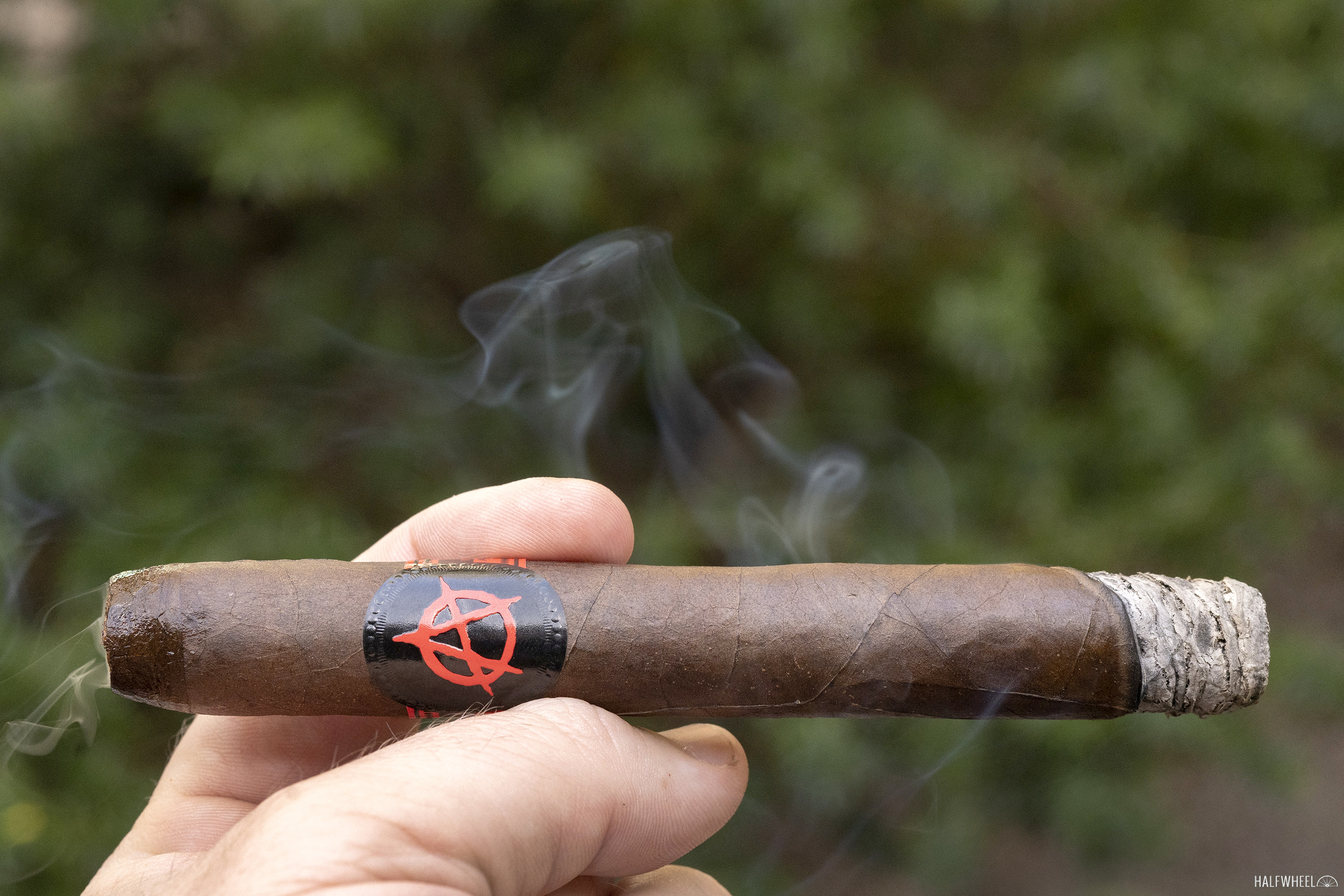 As avid readers of this site have undoubtedly noticed, we’ve made it a point to photograph families of cigars, or as we like to call them, collections.

Pete Johnson of Tatuaje is responsible for one of the most well-known cigar collections of the past 10 or 15 years, the Monster Series. But in addition to his own series, he’s been involved in some others, including a retailer’s that is celebrating its 10th anniversary this year: the Smoke Inn Microblend Series.

That series debuted in 2010, when the store’s proprietor, Abe Dababneh, taking inspiration from the craft beer industry, launched a collection of limited edition cigars. The first release in the series came from none other than Pete Johnson, a cigar called the Tatuaje Anarchy.

The original Anarchy was a 6 1/4 x 48/52 figurado that used an Ecuadorian habano wrapper over Nicaraguan binders and filler. It would lay the groundwork for a series that would include cigars from some of the biggest names in the industry, including Padrón, My Father, Arturo Fuente, Davidoff, Dunbarton Tobacco & Trust, Drew Estate, Room101, Illusione, Espinosa Premium Cigars and Quesada, among others. 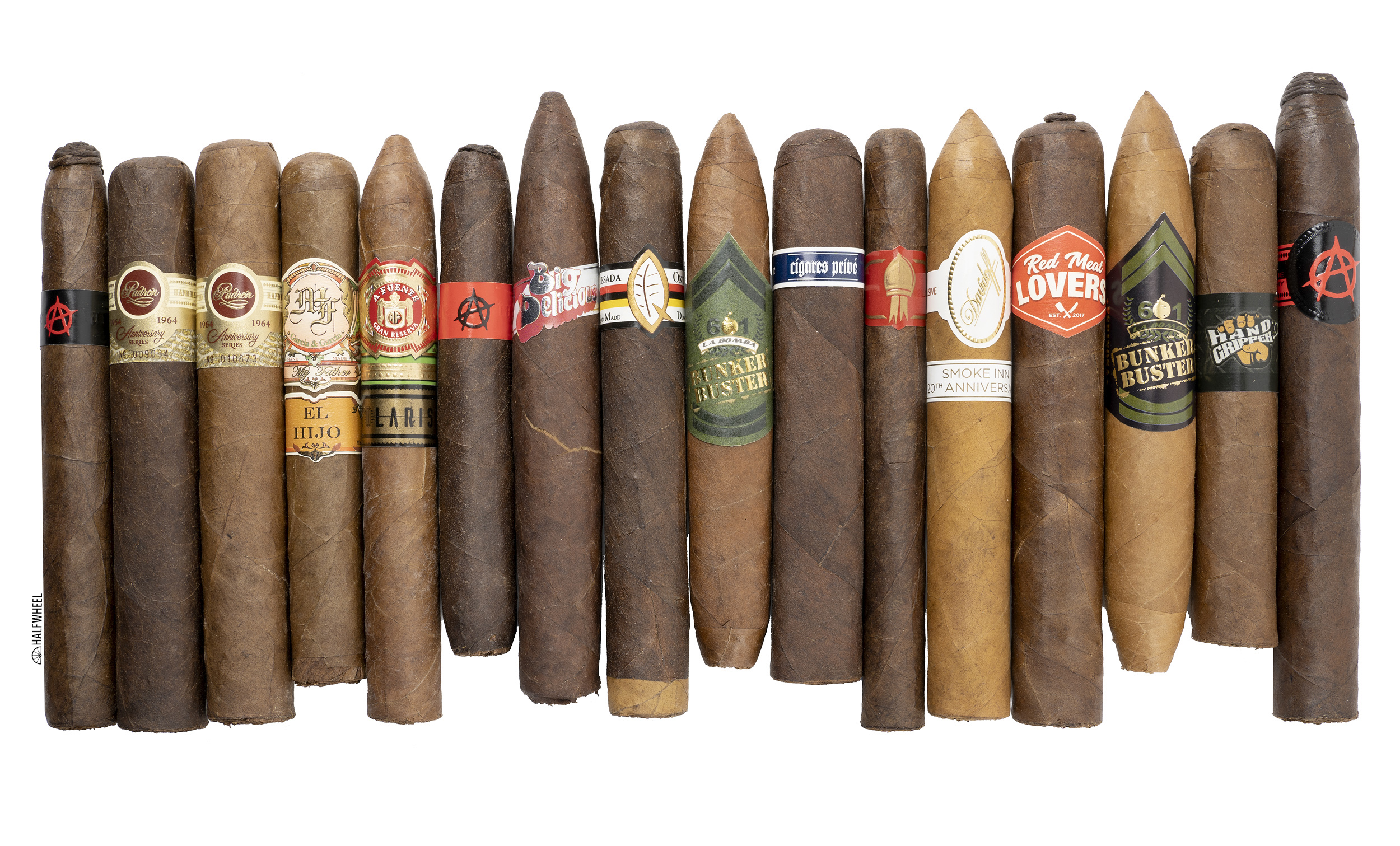 It would also include more releases from Tatuaje. In 2012, the Tatuaje Anarchy Apocalypse would join the Smoke Inn Microblend Series. It would be an inch shorter than it predecessor, measuring 5 1/4 x 48/52, and it swapped the original Ecuadorian habano wrapper for a Connecticut broadleaf leaf. 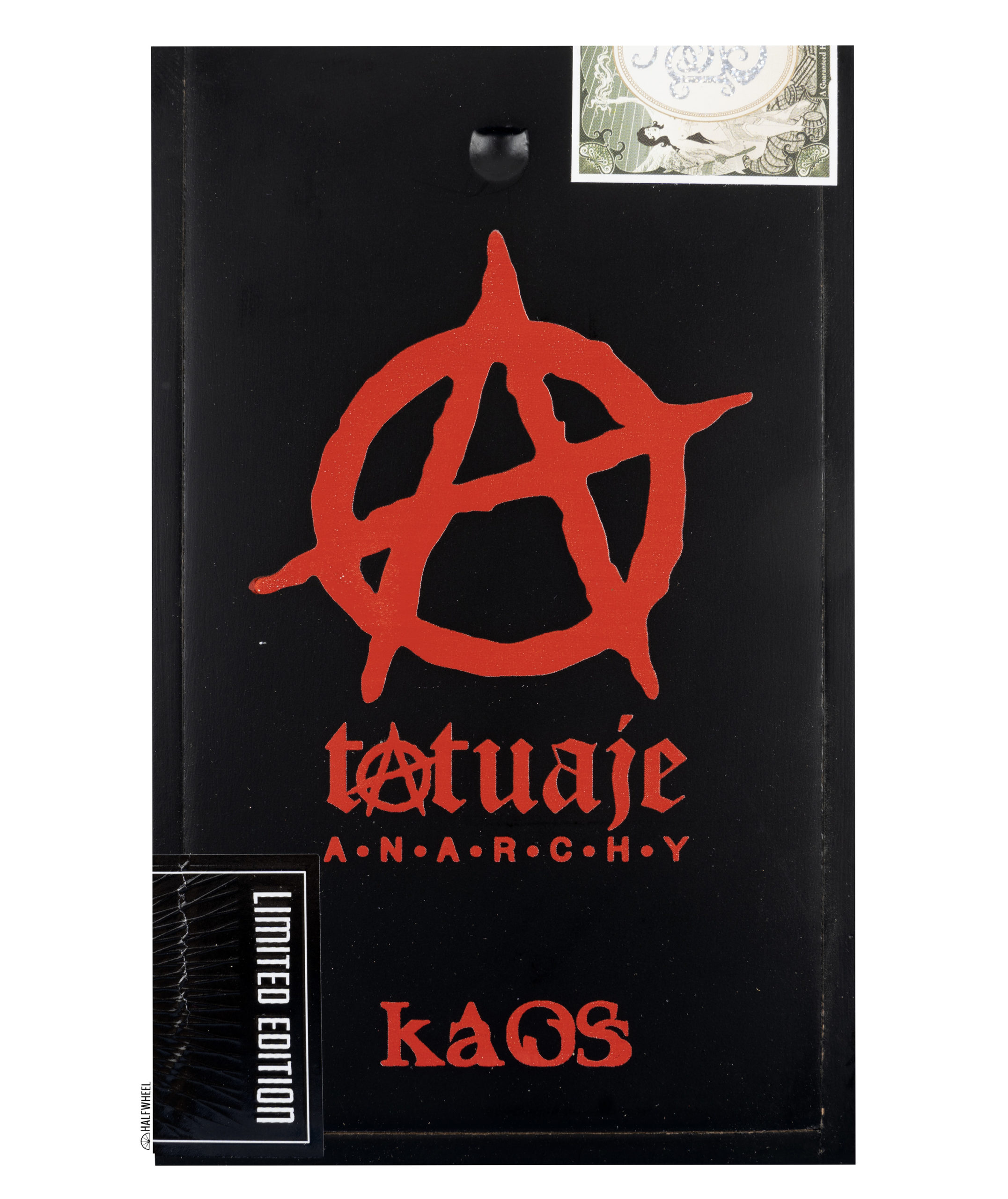 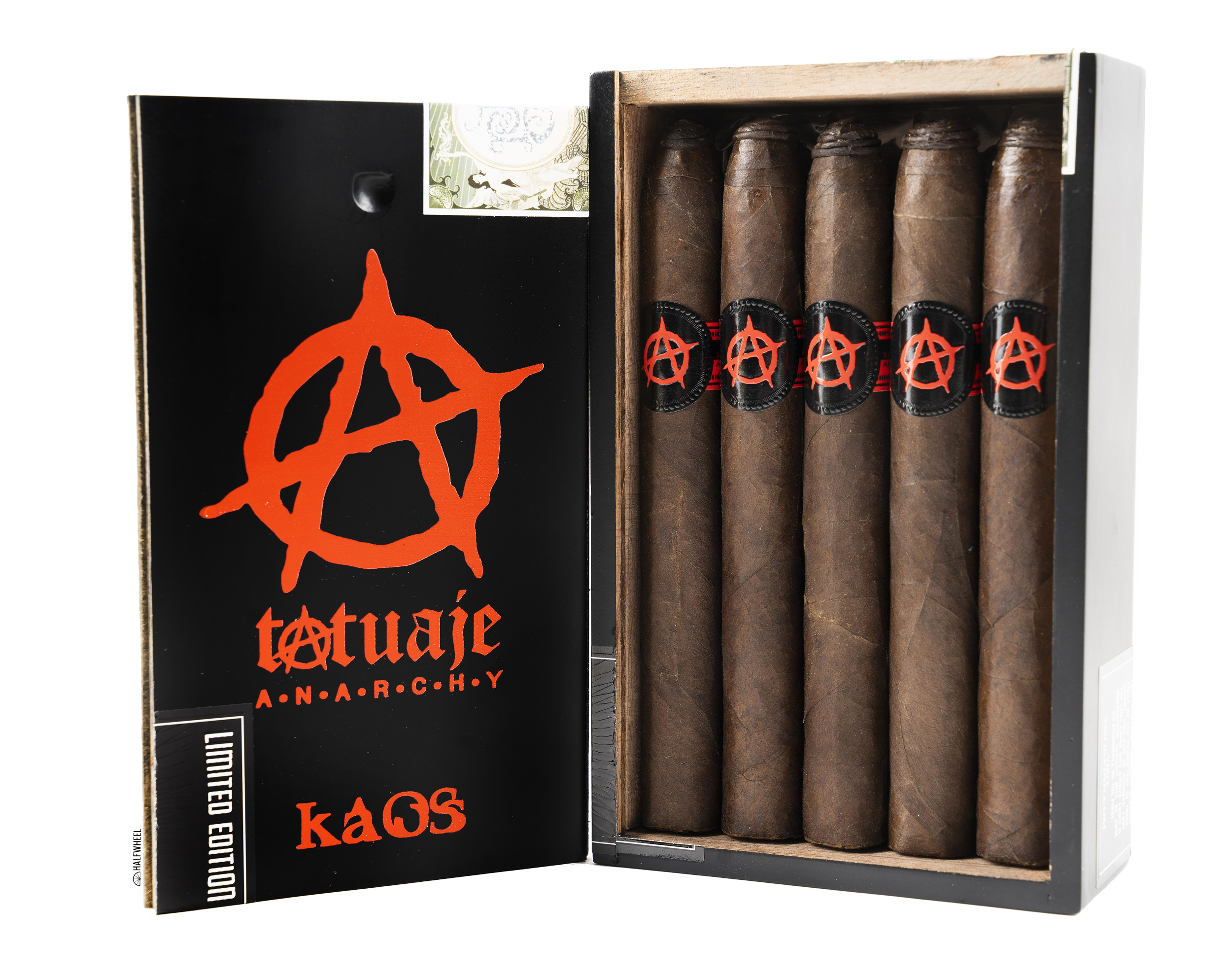 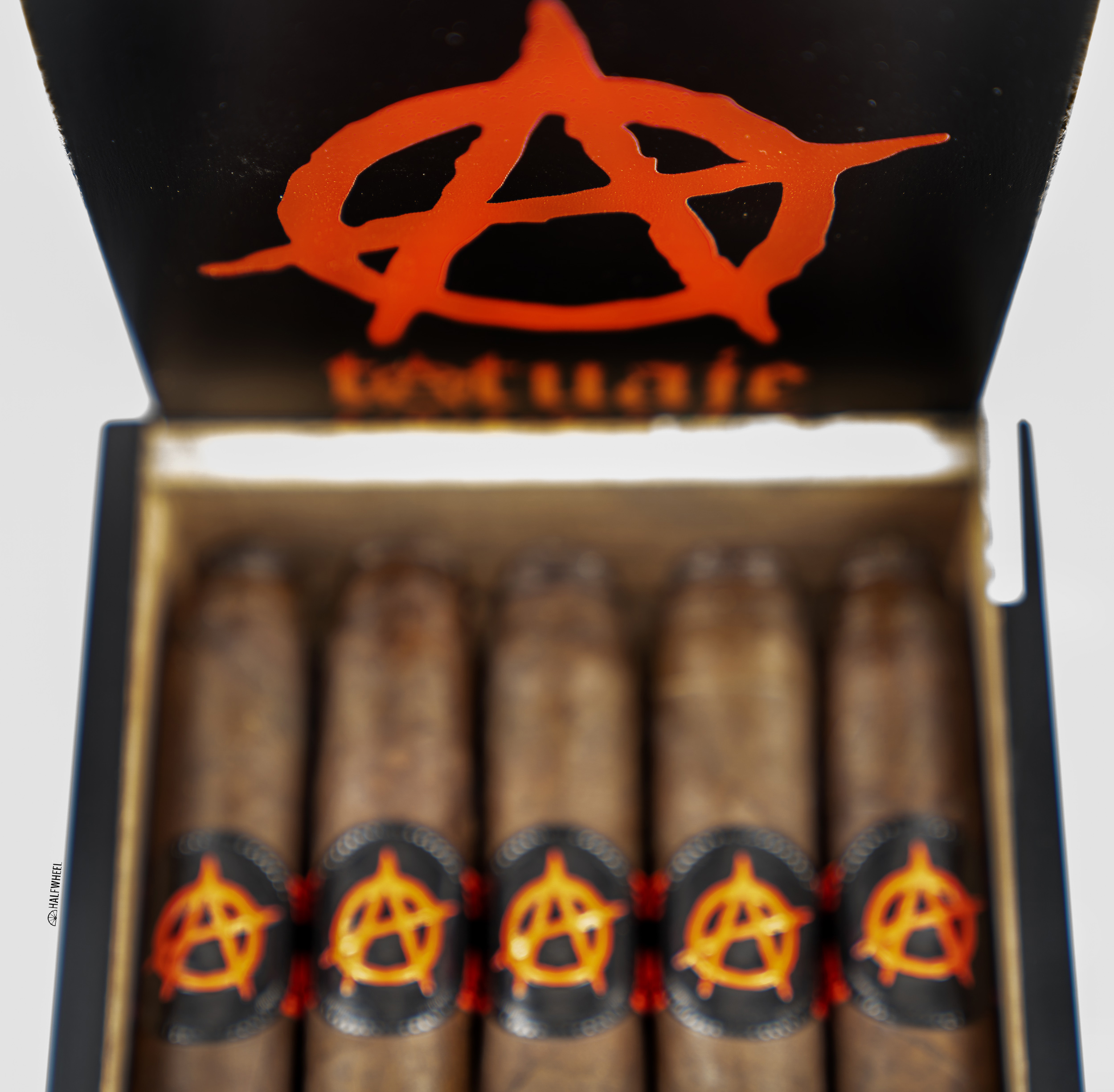 Early in 2020, a fourth Tatuaje cigar would make its appearance in the Microblend Series.

The Tatuaje Anarchy Kaos debuted as part of Smoke Inn’s annual The Great Smoke event, specifically at a dinner hosted by the Red Meat Lovers Club on Feb. 21, 2020. Pete Johnson was in attendance, and he presented each attendee with a three pack of cigars containing two of the Kaos and a third cigar called The Pale Horse, which Abe Dababneh said may become a Microblend Series release in the future.

It’s a 6 1/2 x 49 vitola with the 109 style head that has undergone an uptick in popularity in recent years. The blend features a dark Ecuadorian habano wrapper over Nicaraguan binders and filler, the same as the one used for the original Tatuaje Anarchy. 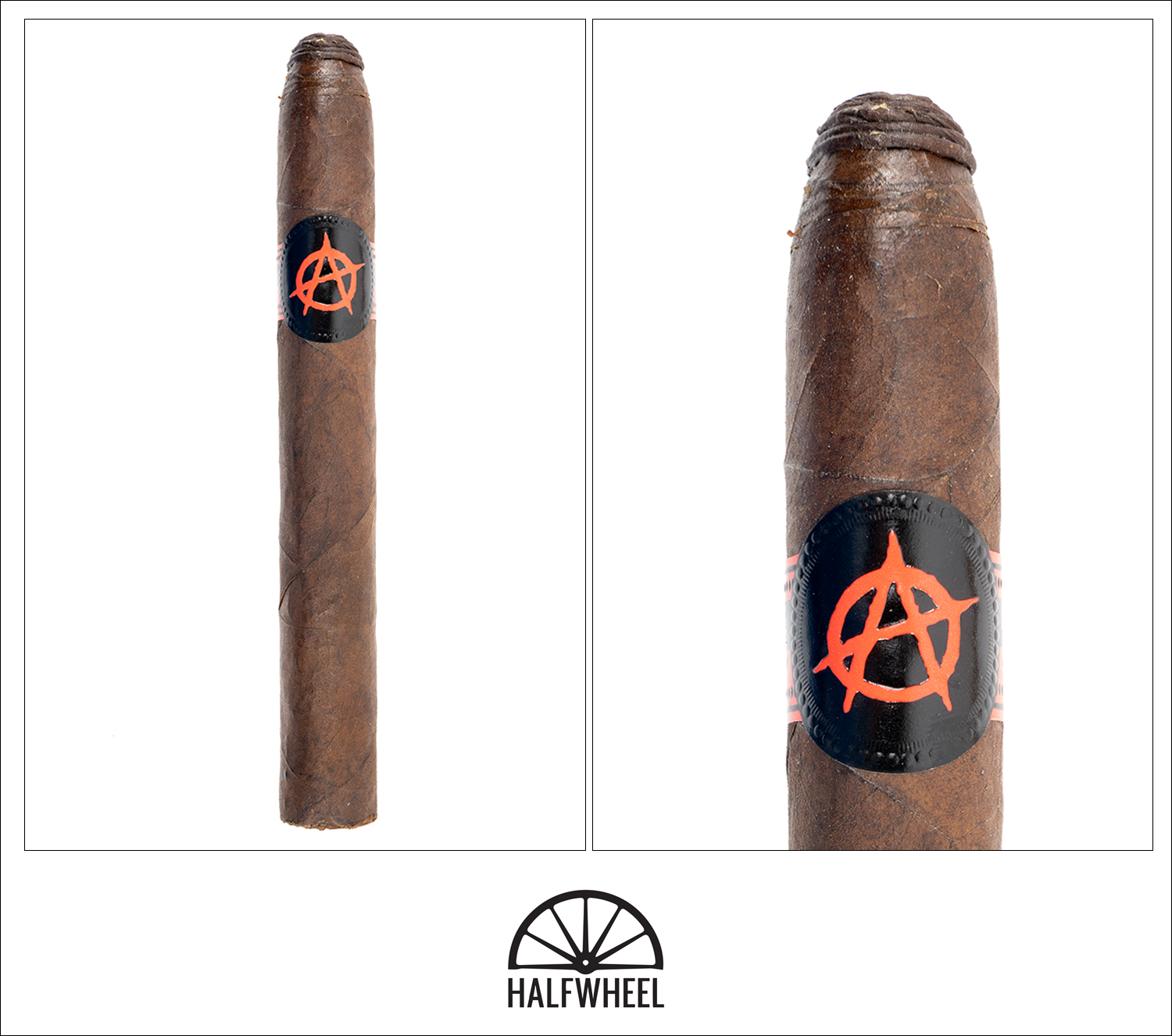 There’s a fair amount to take in from the first Tatuaje Anarchy Kaos that I smoke; the head is probably the most eye-catching thanks to its slight taper that reminds of the 109 vitola, but wrapped quite thoroughly with a coil of tobacco that emanates from a small bun and encircles it six times. The red and black band with the symbol for anarchy is probably next, especially when I realize it’s the same as on the Exclusive Series but in different colors, but what really catches my attention is the vein structure on the dark brown wrapper leaf. It feels more pronounced than what I would call average, with the first sample displaying a fairly prominent one on its front side, with an offshoot crossing the face of the cigar as well. I can’t say I find any issues with the roll, feeling firm but with a bit of even give. The foot of the cigar starts leading me towards chocolate brownies before diverting towards wood—or in one sample the inverse—and then a smell I can’t quite place but which reminds me of at the center of a box factory. There’s dried wood and a bit of a paint or other wood treatment smell, but they are faint, almost ambient smells wafting through the space. If anything, it’s a dry, nostril tingling and sneeze-inducing aroma. The coiled head gives me a good place against which to set my cigar scissors, though it feels like I’m taking off more of the head than I should on the first sample. I alter that approach and uncoil the tobacco on the second sample and cut the head much higher, giving a smaller opening but not adversely affecting airflow. Meanwhile, the third sample sees me cut right through the midpoint of the coil with good results, removing the excess of the coil without issue. The cold draw is smooth and offers a bit simpler flavor of dry wood and pepper, a combination that tingles my tongue and lips but doesn’t offer a lot to explore.

The first puffs of the Tatuaje Anarchy Kaos aren’t too far off from what I would have expected given the aroma and cold draw; there’s dry wood and black pepper out of the gate that provide plenty of mouthfeel and tingle while also beginning to dry out the sides of my tongue. It’s a flavor that should be immediately recognizable for those who are familiar with Ecuadorian habano tobacco. It’s also one that doesn’t respond to being over smoked, giving a bit of irritation towards the back of the throat as a trade-off for that extra puff. As the burn line hits the one-inch mark, the habano profile finds itself sharing the stage more with Nicaraguan tobacco as earth and a bit of chocolate sweetness emerge, with the black pepper taking a step back. Retrohales are pepper-forward but hold onto the habano profile even as the flavor has shifted. The draw through the first third is near perfect, the ash tight and dense, and smoke production good if not remarkable. Flavor is medium-plus to medium-full, strength is around medium, and body is between the two.

A retrohale at the start of the second third shows that the Tatuaje Anarchy Kaos is shifting to a bit more of a campfire profile, meaning that the wood and pepper are present but it’s now a bit smokier, rich and complex. When combining puffs and retrohales, I begin to get a bit of cocoa powder, though I can’t say I find it when the experiences are separated. It’s a high point of the cigar so far, and while it has so far been good, I’ve found myself wanting just a bit more from every puff. The puffs after the midpoint of the second third brings about a bit earthier profile with a bit more pronounced chocolate spin, though not as distinct as if eating it on its own. The second third finishes at medium-full in flavor, medium-plus in body, and still medium or just over that in strength, though I’m wondering if this might have some sneaky strength waiting for me once the cigar is finished. 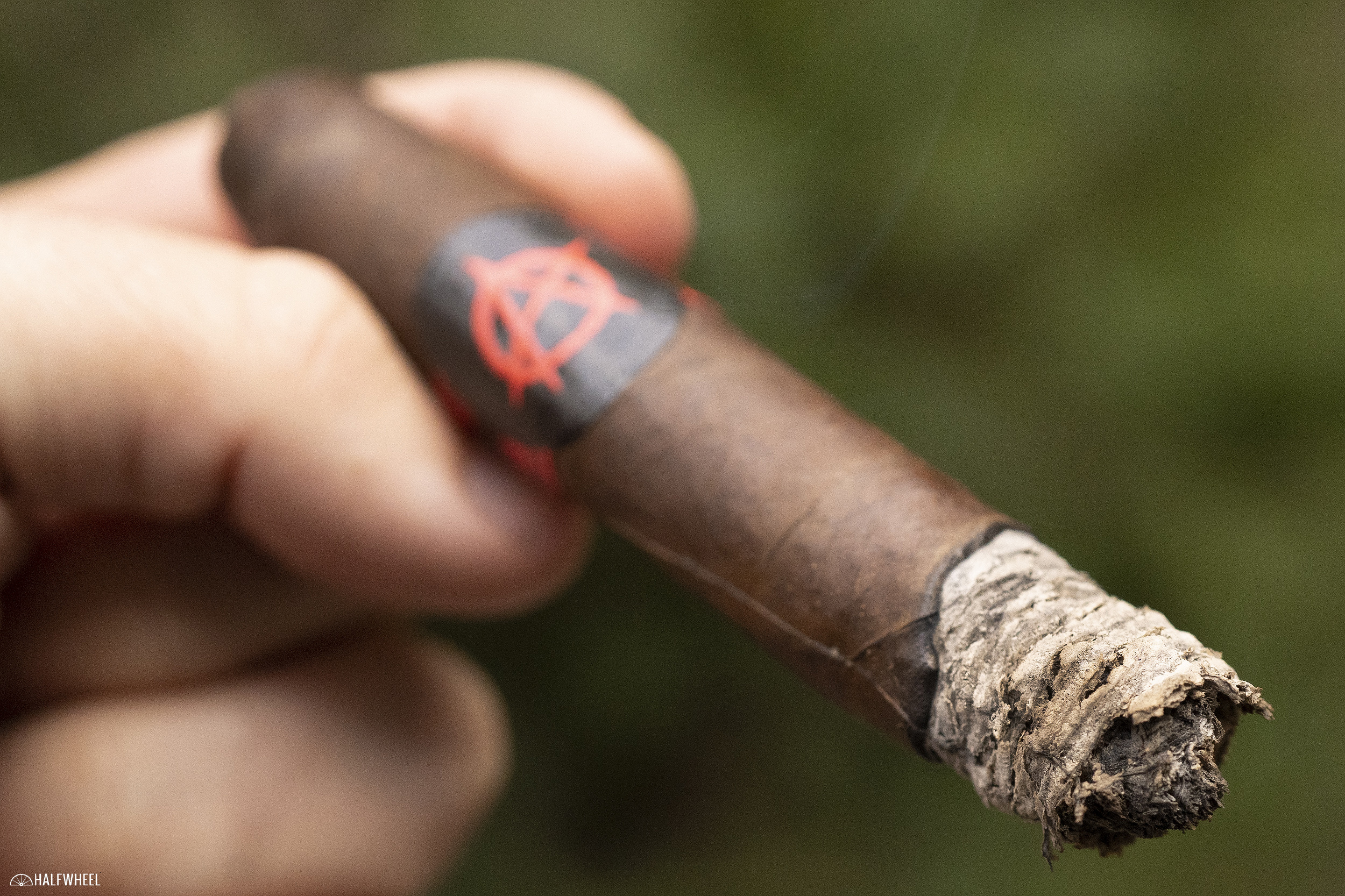 If the first third of the Tatuaje Anarchy Kaos was almost unmistakably habano in its profile, the start of the final third leaves only minimal suggestions that it’s part of the blend. There’s much more earth, a thick and somewhat surprising amount of chocolate that is quite good, and black pepper that tingles the tongue and nostrils, arguably the only remnants of that earlier profile. The wood flavor has almost completely left the profile, replaced by a bit of rockiness from the earth, though that doesn’t mean the smoke isn’t still drying out the palate. It’s a different sensation, but the result is largely the same. When I think of some of Tatuaje’s fuller profiles, this would certainly fit in amongst them; at the spot where the band would be, the cigar is much closer to full-bodied, the chocolate has backed off a bit, black pepper has filled the gap, and rocky earth continues to serve as an active base flavor. The profile closes out the cigar, taking it to full flavor and right around full in body and strength. 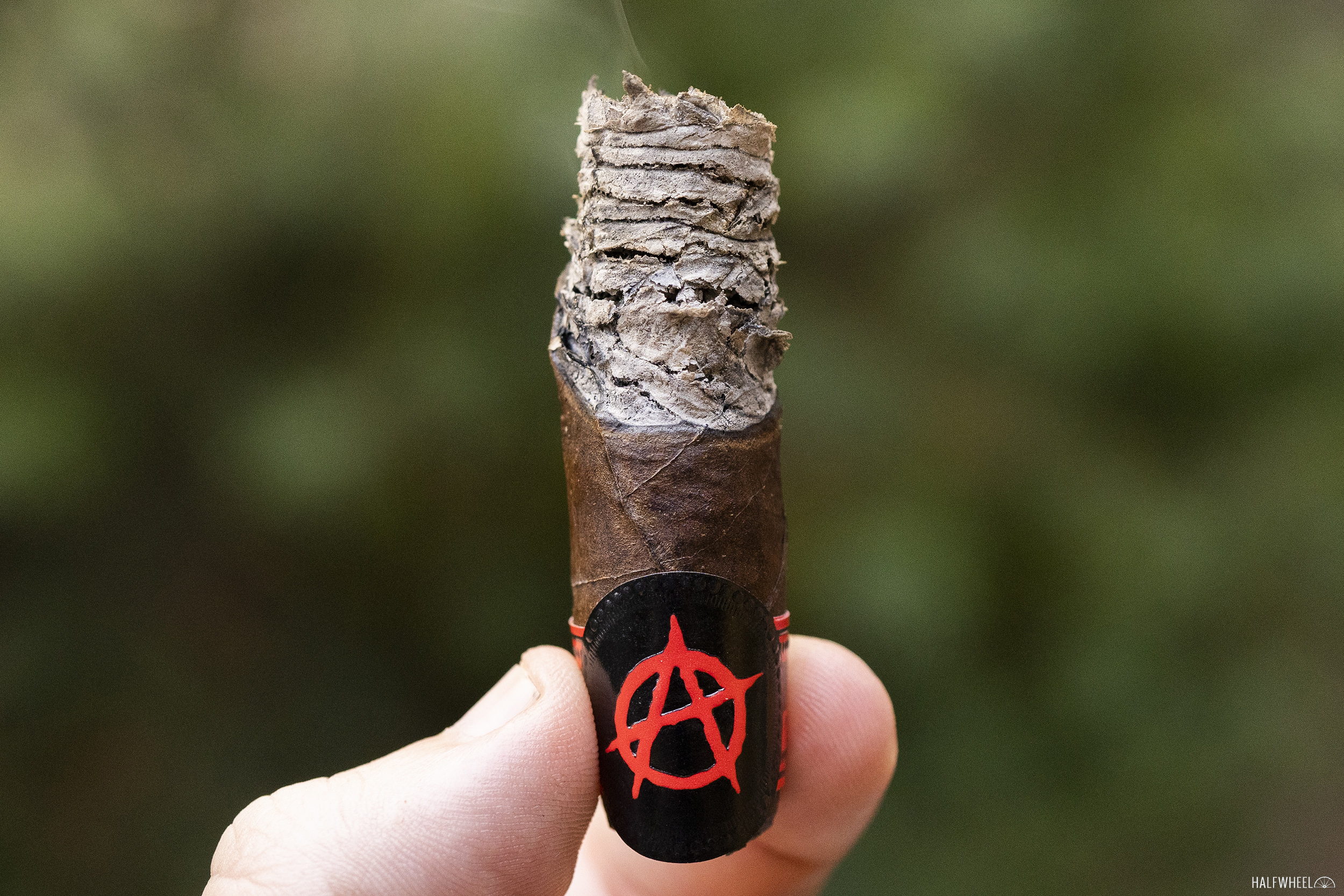 I'm always hesitant to say that a cigar lives up to its name, and that applies here. While the flavor profile of the Tatuaje Anarchy Kaos is never chaotic, it does progress quite a bit from start to finish, making for a cigar that makes a lot of plays with varying results. Fans of Ecuadorian habano should be very pleased by the first third, and the handful of spots in the second third where the cigar goes through its most pronounced transitions can be excellent. The final third seems to focus more on the Nicaraguan tobacco, which while good, doesn't quite reach the levels of its preceding profiles. All of this puts the cigar in a spot where it sits somewhere between very good and excellent, and I can make the case for either assessment as well as for valuing the cigar's high points enough to make it an easy call to get some of these. The construction is flawless, the 109 cap an added bonus, and each sample remarkably consistent. I'd certainly have no hesitation to smoke a few more of these or recommend them to anyone who is a fan of medium-plus to full-bodied cigars.