Anniversaries are a popular reason to release special cigars, but for the 15th anniversary of the Tatuaje, owner Pete Johnson decided to reach into the past for inspiration.

In fact, there is not one, but two different Tatuaje 15th Anniversary blends to celebrate the occasion, both of which shipped to retailers in July in the same two vitolas: a 5 1/2 x 52 Belicoso Fino and a 6 1/2 x 52 Torpedo Grande. According to Johnson, both cigars debuted in 2004 and were sold at retailer Grand Havana Room until 2006.

“Production demands on other sizes in the Tatuaje Miami line put these two cigars on a long hiatus,” said Johnson, in a text to halfwheel. “I found a few packs of 10 of each from the first production in my personal inventory and decided to resurrect them to celebrate 15 years of rolling cigars in Miami.”

In terms of blend, while each version uses an Ecuadorian wrapper covering a Nicaraguan binder and Nicaraguan fillers, the wrappers are a different shade of the same varietal: Ecuadorian rosado claro or Ecuadorian rosado oscuro. Both blends are regular production releases packaged in boxes of 10 and are being rolled at the El Rey de los Habanos factory in Doral, Fla.

There are two different versions of the Tatuaje 15th Anniversary, each in the same two vitolas. 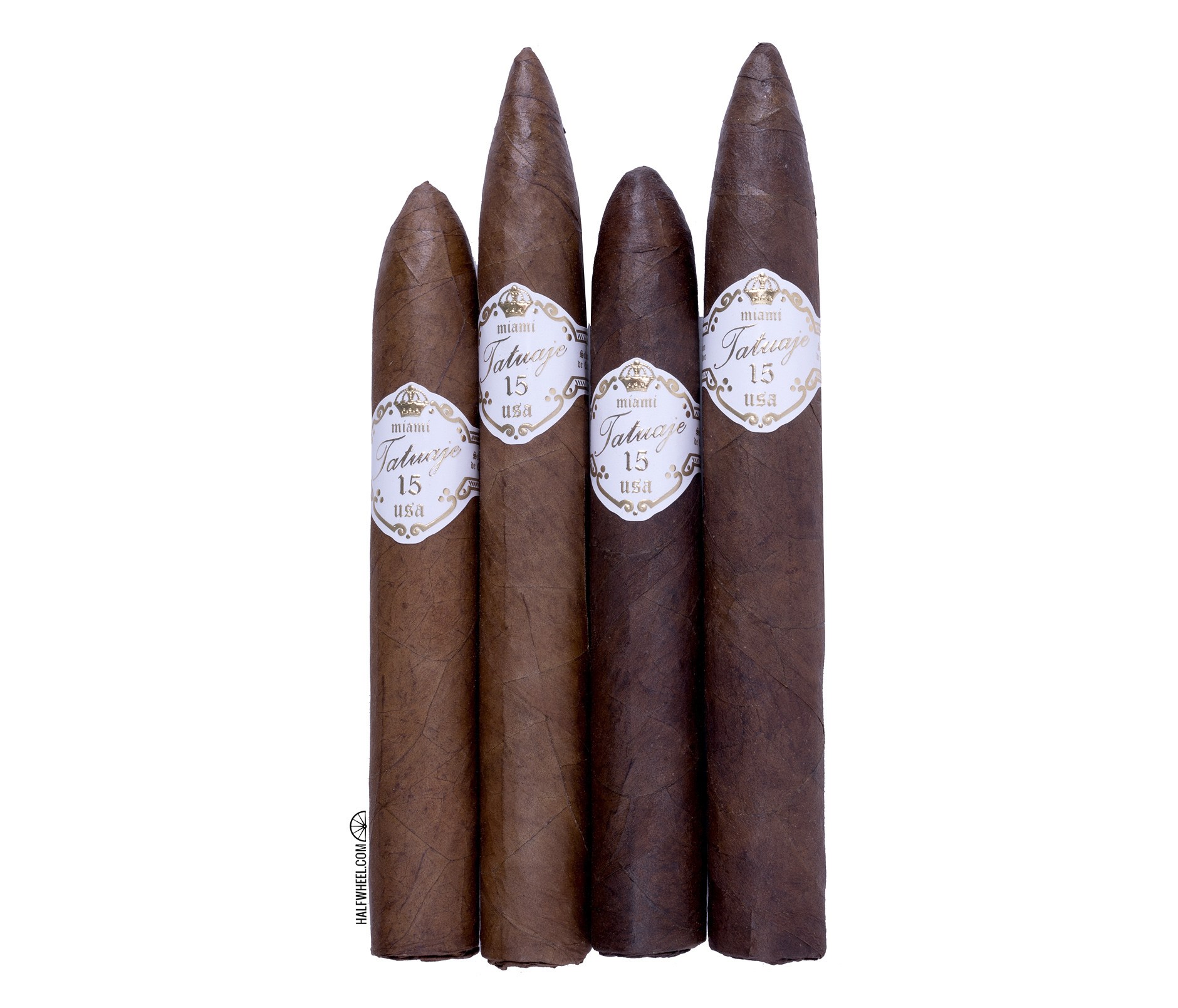 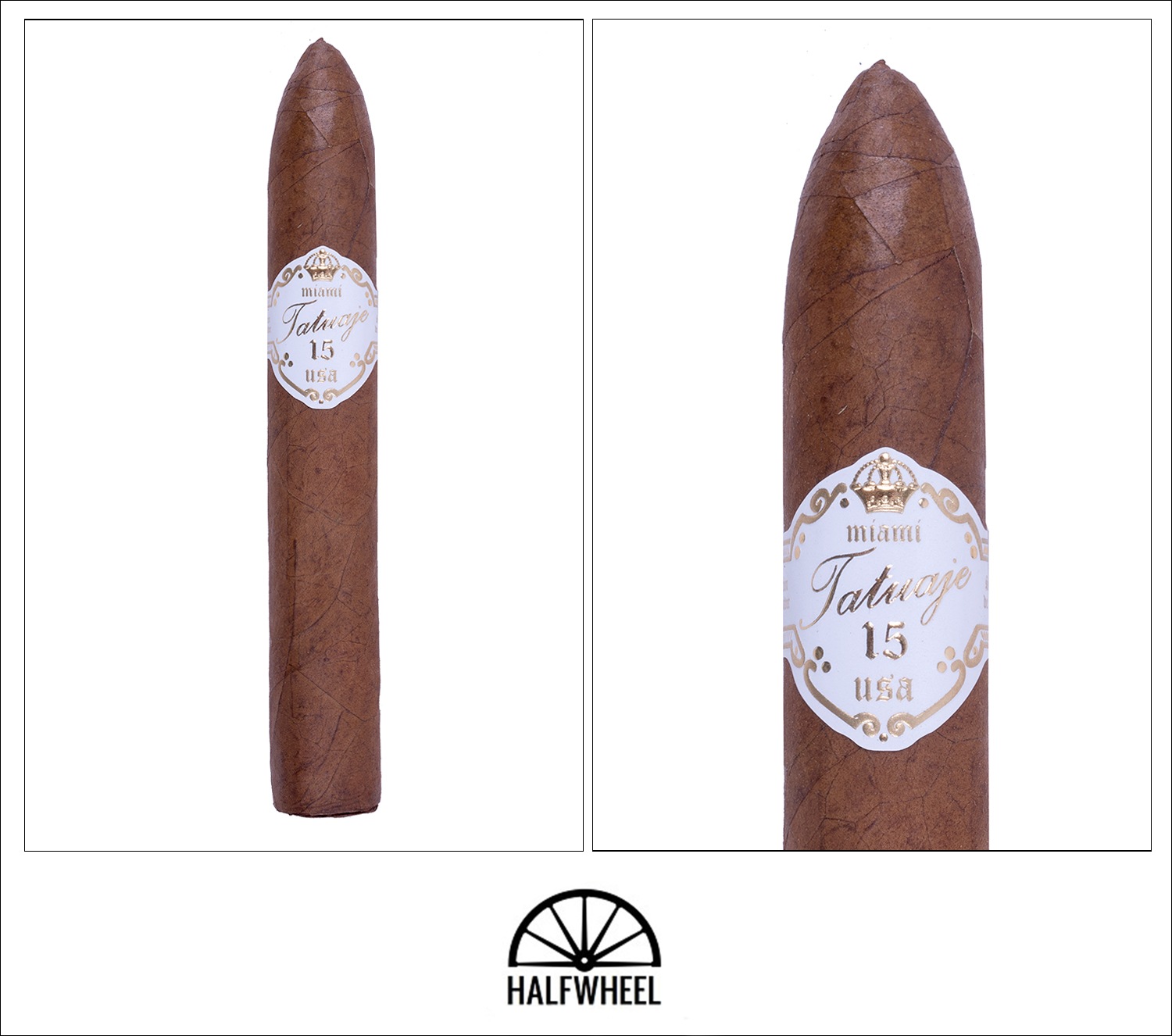 Covered in a golden brown wrapper, the Tatuaje 15th Anniversary Habano Rosado Belicoso Fino is both smooth as silk and slick with oil. The cigar features a covered foot as well as a soft spot just above the main band, and it is just a touch spongy when squeezed. The aroma from the wrapper is a combination of peanut shells, creamy oak, leather, manure, dark cocoa nibs and white pepper, while the cold draw brings surprisingly light flavors of dark chocolate, oak, leather, nuts, pepper and touch of varnish.

Starting out, the Tatuaje 15th Anniversary Habano Rosado Belicoso Fino features a distinct creamy and woody oak base, interspersed with notes of almonds, hay, dark chocolate, leather and anise. There is a light butterscotch sweetness noticeable on the finish along with some slight floral on the retrohale, and I also pick up some slight spice on my tongue although it does not seem like it will be sticking around long. The draw is excellent so far after a Dickman cut and there is a sharp burn, while the smoke production is about average flowing off of the foot. Strength-wise, the Tatuaje starts off fairly light and fails to reach the medium mark by the end of the first third. 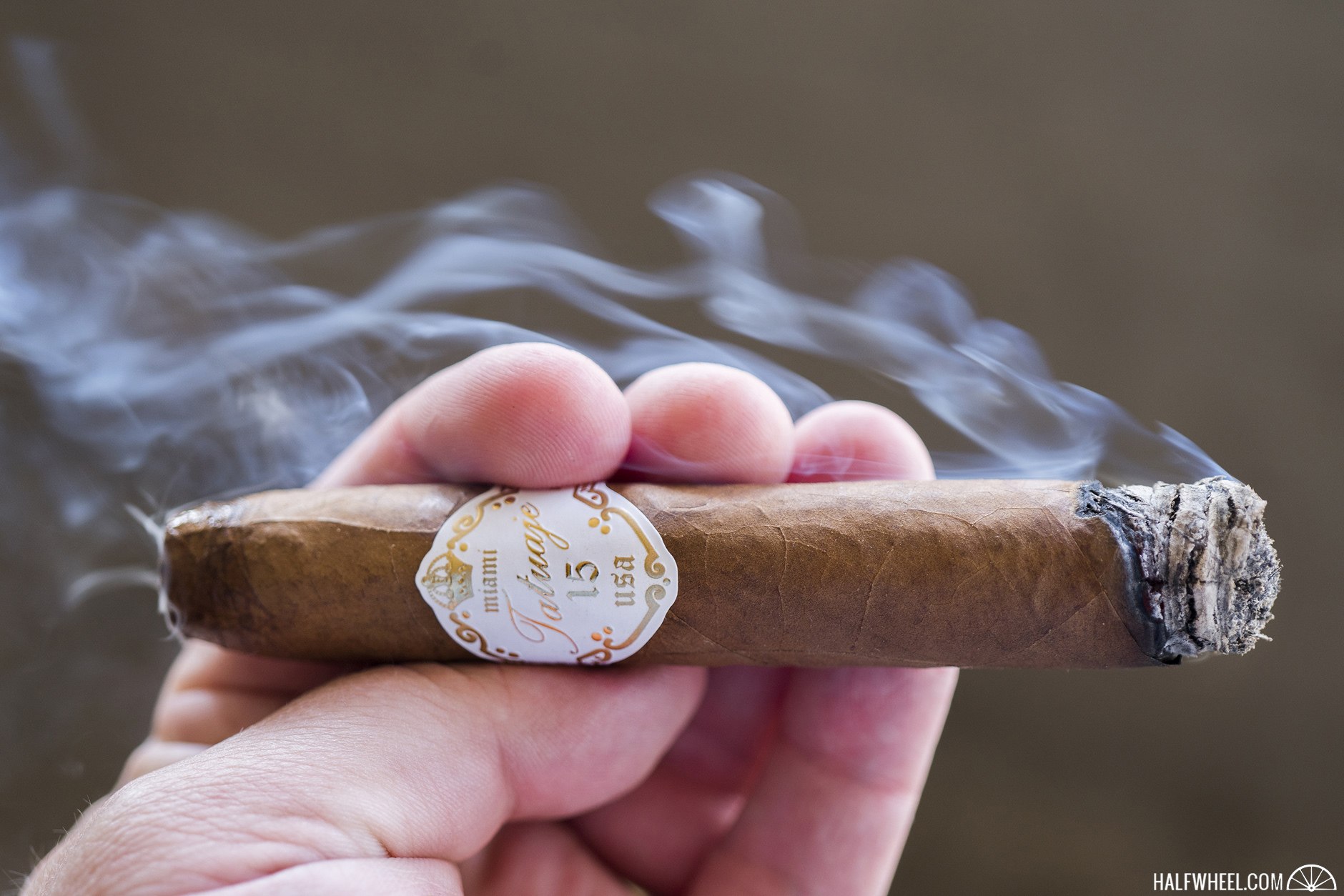 As expected, the slight spice that was present on my tongue in the first third is long gone by the time the second third of the Tatuaje 15th Anniversary gets started, although the sweet butterscotch note on the finish has increased in strength slightly. The dominant flavor shifts to a creamy leather note, followed closely by oak, espresso beans, cocoa nibs, earth, almonds and white pepper, as well as a touch more floral on the retrohale. Construction-wise, both the burn and draw continue to impress, while the smoke production stays the course compared to the first third. The strength actually begins to increase right as the second third comes to an end, but it remains a ways away from the medium mark. 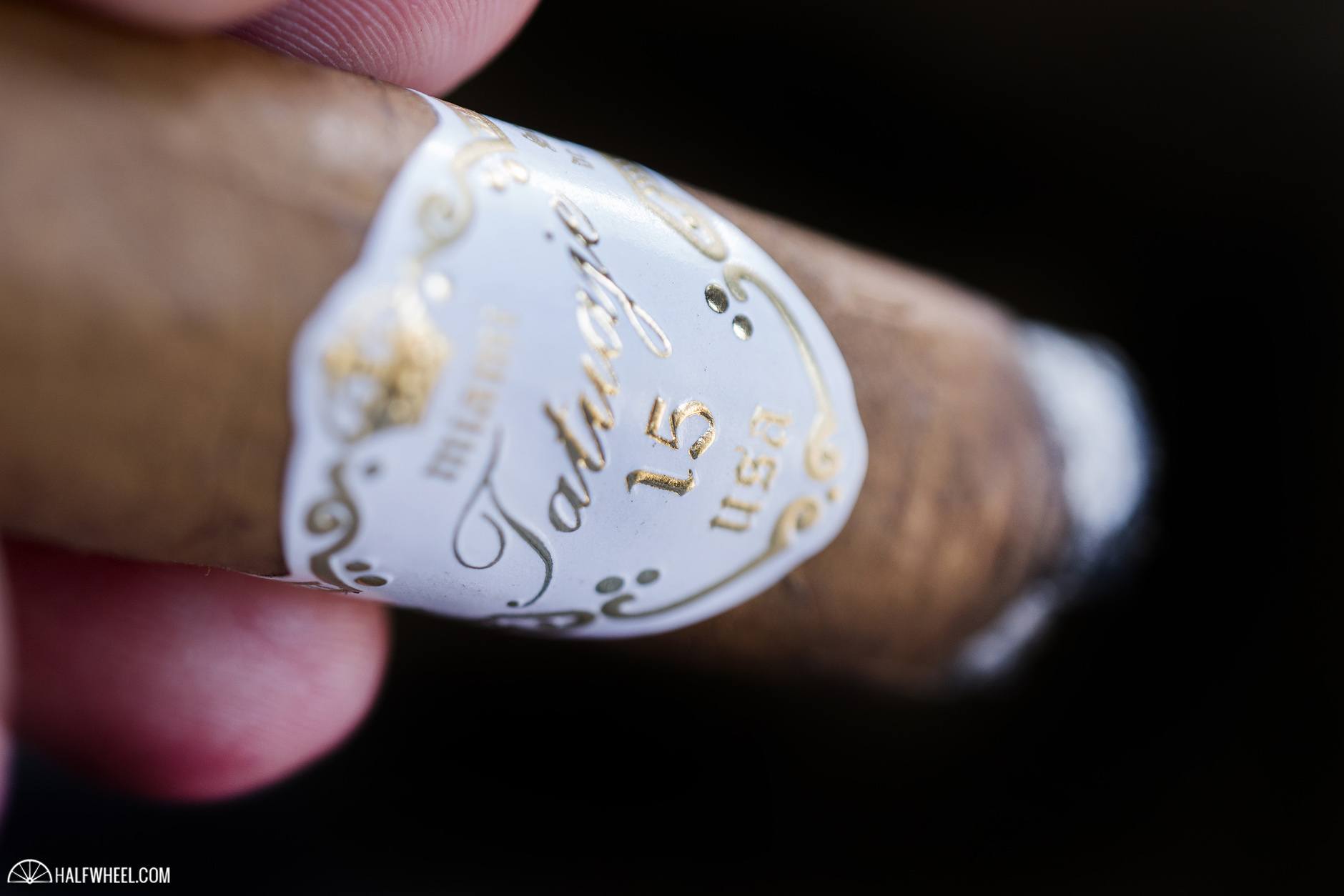 While the slightly sweet butterscotch note on the finish is still present as the final third of the Habano Rosado Belicoso Fino begins, it is noticeably reduced compared to first two thirds. The dominant flavors in the profile shifts as well, with a freshly roasted espresso bean note now taking the top spot, interspersed with other flavors of popcorn, creamy leather, oak, cocoa nibs, salty peanuts and floral. The burn and draw remain excellent until the end of the cigar and the overall strength ends up hitting a point just over the medium mark before I put the nub down with about an inch left. 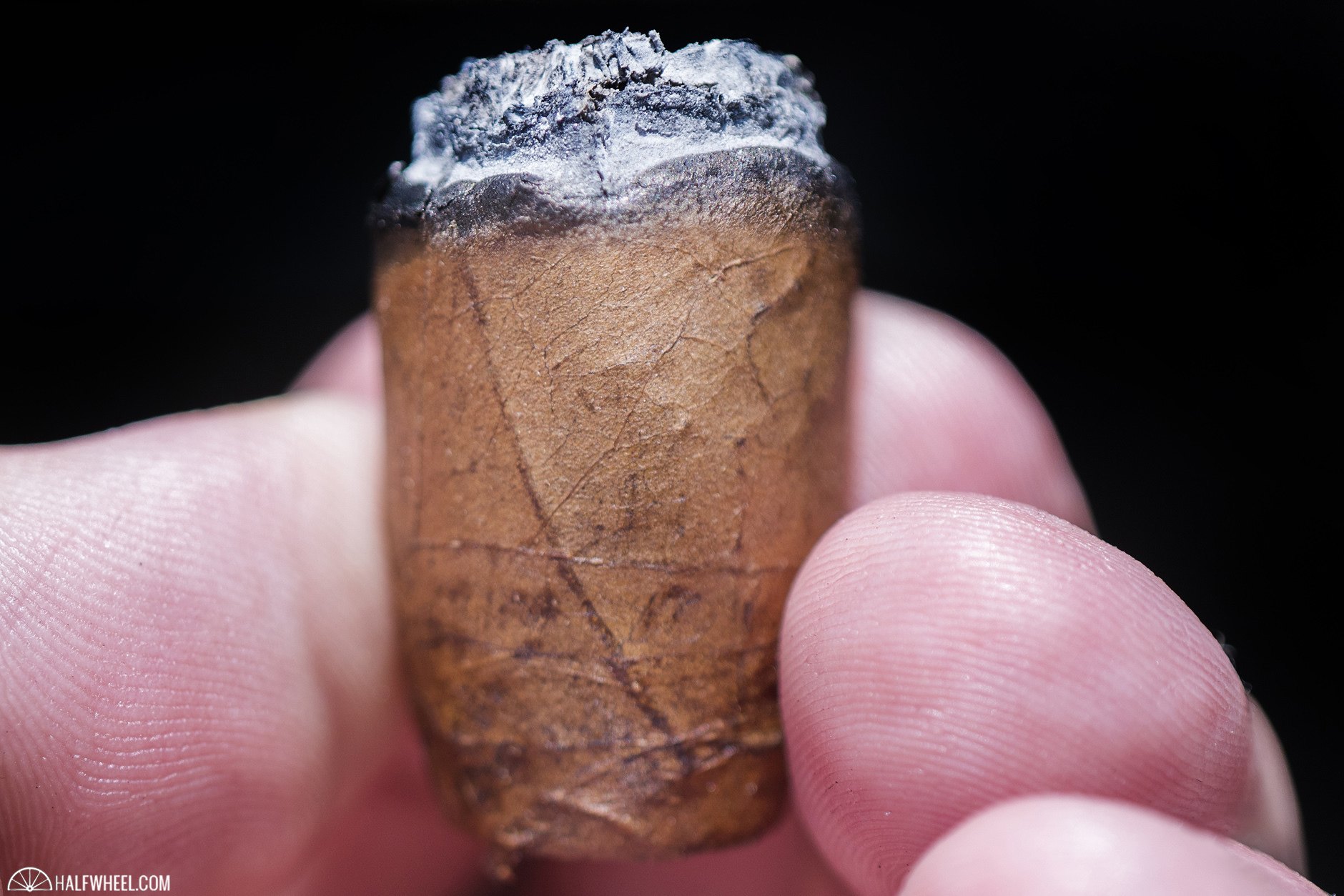 Those looking for the typical Tatuaje-esque profile will not find it here: the Tatuaje 15th Anniversary Ecuadorian Rosado Claro is light and creamy, with nuanced espresso bean, leather, butterscotch and oak flavors that have to be concentrated on rather than bold notes that punch you in the face. Yes, it a bit expensive, due at least in part to the fact that it is a Miami-rolled product, but I was impressed that it is a regular release as opposed to limited and I love the fact that it comes in boxes of 10. I have always felt that some of Johnson's best creations involve times he has stepped out of his normal wheelhouse—see the La Vérité 2013 and L’espirit de Vérité 2013 for proof—and while the Tatuaje 15th Anniversary is not nearly as good as those, it is a wonderful change of pace cigar with a wonderful profile that I will be smoking again.