In 2018, Serino Cigar Co. introduced a brand new line bearing the name Taíno, which is a reference to a group of native peoples of Cuba, the Bahamas, Jamaica, Puerto Rico and other Caribbean islands which have been credited with the introduction of tobacco to Christopher Columbus—and thus—the Western world. The three-viola regular production line is produced at La Corona S.A. in Estelí and is made up of an Ecuadorian habano medio wrapper covering a Nicaraguan binder and Nicaraguan filler tobaccos.

The next year, Serino announced the first line extension for the Taíno brand and even showed it off during the 2019 IPCPR Convention & Trade Show. Named Taíno Heritage, the regular production line was announced as an August 2019 release but was pushed back to 2020 before being delayed again due to ongoing issues related to the COVID-19 pandemic, this time to June of this year.

In keeping with the theme of honoring the Taíno people, the names for each of the vitolas in the newest line are words taken from the Taíno culture: Hamaca is a reference to “convention good,” Yocahú means “spirituality,” and Manicato is used as “an ideal characterizing the people.”

“After the tough year that 2020 was for many, it brings us great joy to release Taino Heritage with our Serino retail partners,” said Carson Serino, vp of Serino Cigar Co., in a press release. “I find there to be some poeticism regarding this release in that this brand is centered around people, customs, and community; an area for most that has been limited over the past year.”

However, the release date is not the only thing that has changed from when the Taíno Heritage was originally announced: not only are the prices of each vitola a bit higher, but the blend is also different, highlighted by the inclusion of a new Ecuadorian Sumatran wrapper as opposed to the Ecuadorian habano 2000 wrapper that was first announced. The remaining blend is rounded out with a Dominican piloto cubano binder and filler tobaccos that include Dominican piloto cubano, olor and criollo 98 fillers, as well as Nicaraguan criollo 98. 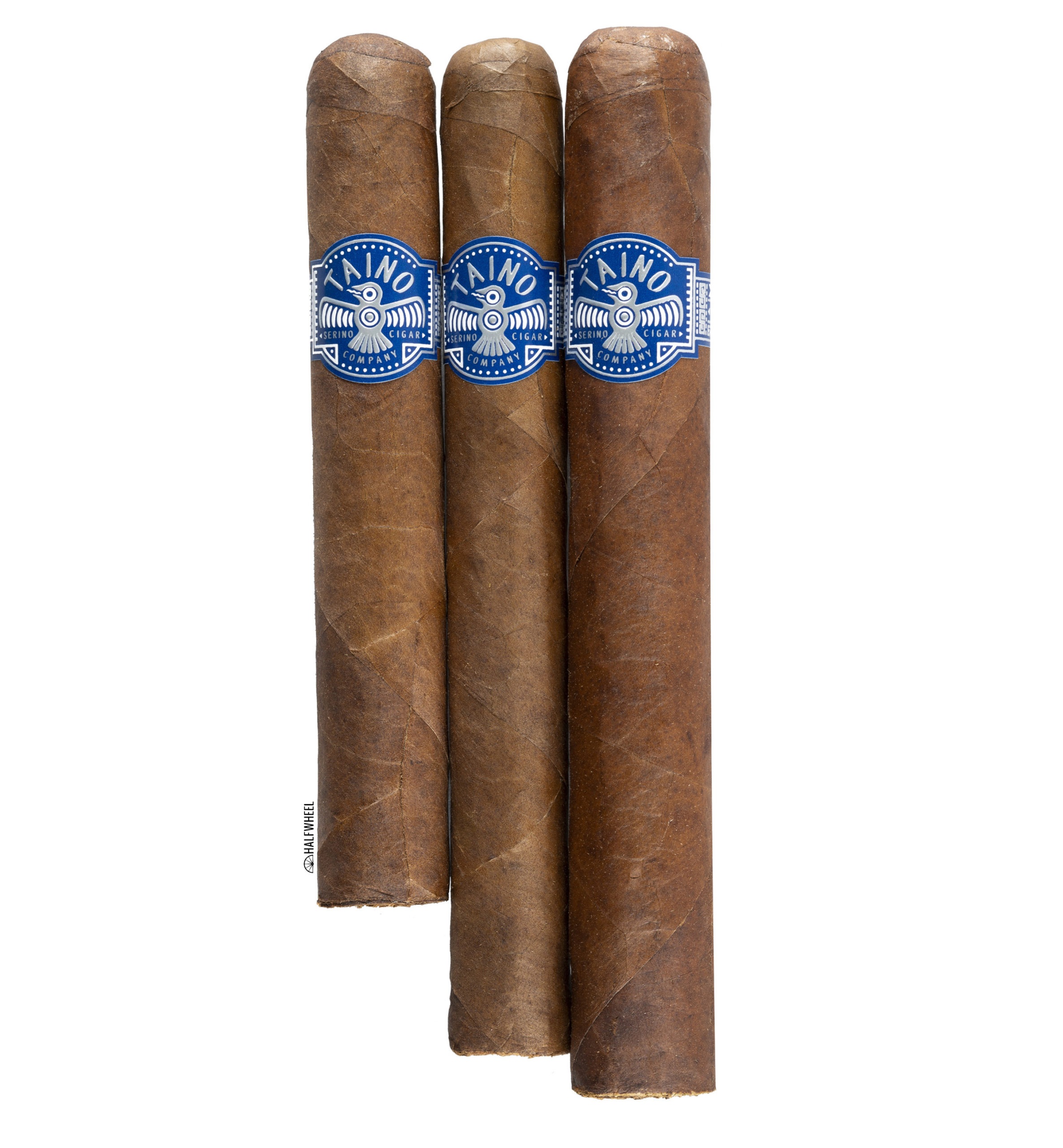 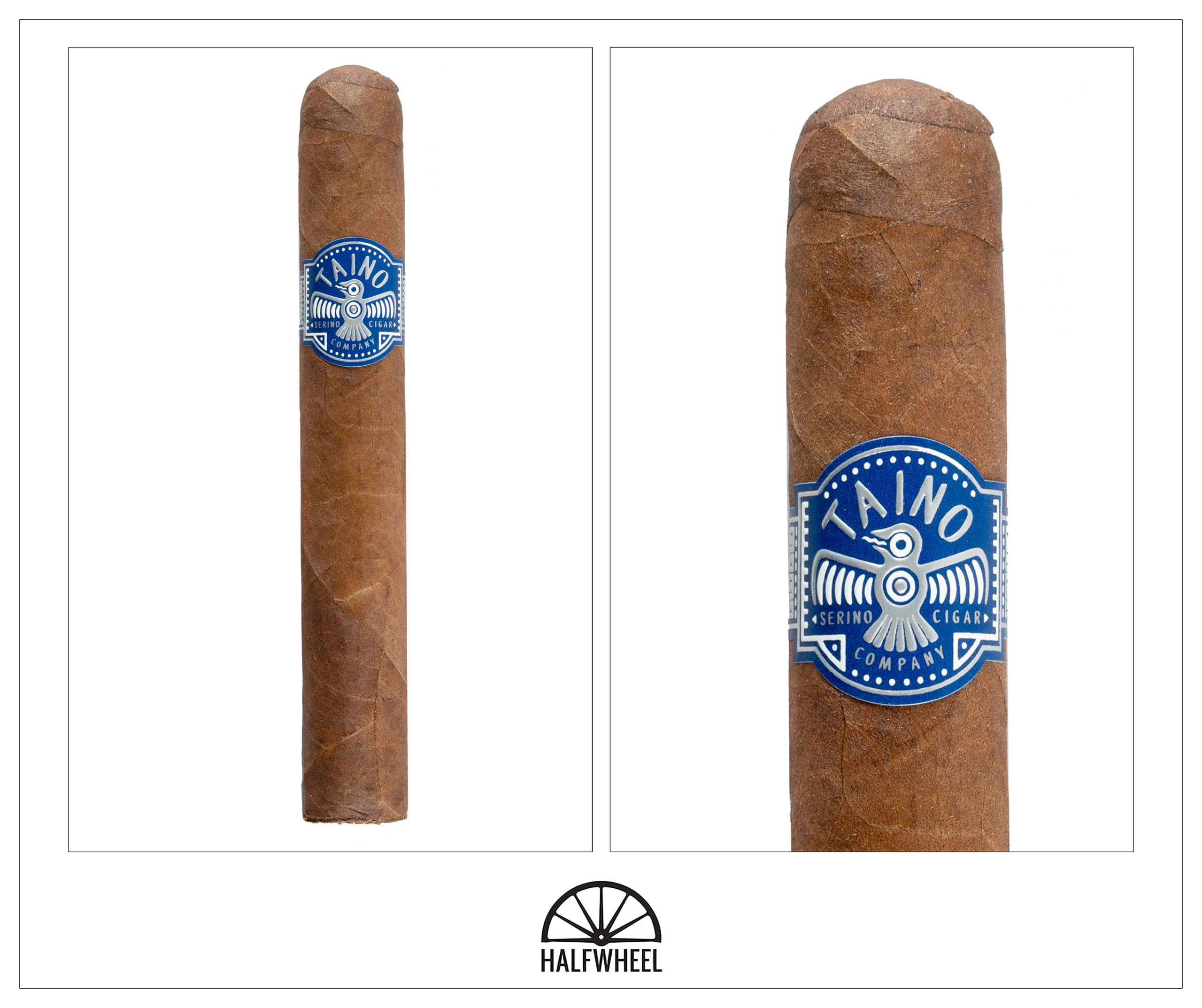 It is hard not to notice the band on the Taíno Heritage Hamaca, with its unique logo and deep blue color that contrasts nicely against the dark cinnamon brown shade of the wrapper leaf. There is also some noticeable oil as well as numerous overt veins running up and down its length, and one sample has a small soft spot just under the main band. The aroma emanating from the wrapper is a combination of earth, sweet hay, creamy cedar and coffee beans while the foot has notes of leather tack, generic nuts, barnyard and more cedar. After a straight cut, the cold draw brings flavors of salted almonds, cocoa nibs, cinnamon, hay, leather, baker’s spices and vanilla bean sweetness.

Immediately after toasting the foot of the Taíno Heritage Hamaca, I notice a strong vegetal note that quickly recedes, allowing main flavors of creamy almonds and cedar to take the top spots in the profile. Additional notes of leather, chalk, gritty earth, roasted coffee beans, cinnamon and floral flit in and out, and there is also some very obvious salt on my lips along with slight spice on my tongue. There is a nice amount of honey sweetness noticeable on the retrohale as well as some black pepper, the former of which seems to be getting stronger as the third burns down. Flavor is medium-full, body is medium and strength ends the first third halfway between mild and medium. In terms of construction, the draw features excellent resistance and smoke production is about average, but the burn has some issues early on that force me to touch it up twice in quick succession.

While the combination of creamy almonds and cedar continues to top the Taíno Heritage in the second third, there are a number of changes in the profile, including an increase in the amount of salt I am tasting on my lips. There is also less spice on my tongue—it pretty much disappears completely after the halfway point—while milder flavors of earth, tea leaves, cinnamon, leather and dark chocolate flit in and out in various amounts. In addition, the honey sweetness on the retrohale has increased a bit, while the black pepper has decreased slightly. Flavor remains medium-full, body is a bit stronger than medium and the strength has increased slightly, although still noticeably below the medium mark. Finally, the draw continues along its excellent path while the burn has evened up nicely and smoke production remains fairly consistent. More changes are in store for the Taíno Heritage Hamaca during the final third, including the main flavors, which have morphed into a rich combination of espresso beans and almonds. Those are followed by creamy hay, cocoa nibs, cinnamon, leather, earth and stronger floral flavors, the latter of which gains prominence in the profile until the last puff. There is still quite a bit of salt present on my lips, while the honey sweetness and black pepper on the retrohale change very little compared to the second third. In terms of construction, both the burn and draw remain trouble-free, while the smoke production has actually increased just a bit. Flavor ends at medium-full, body ends at a solid medium and the strength ends at a point just below medium. 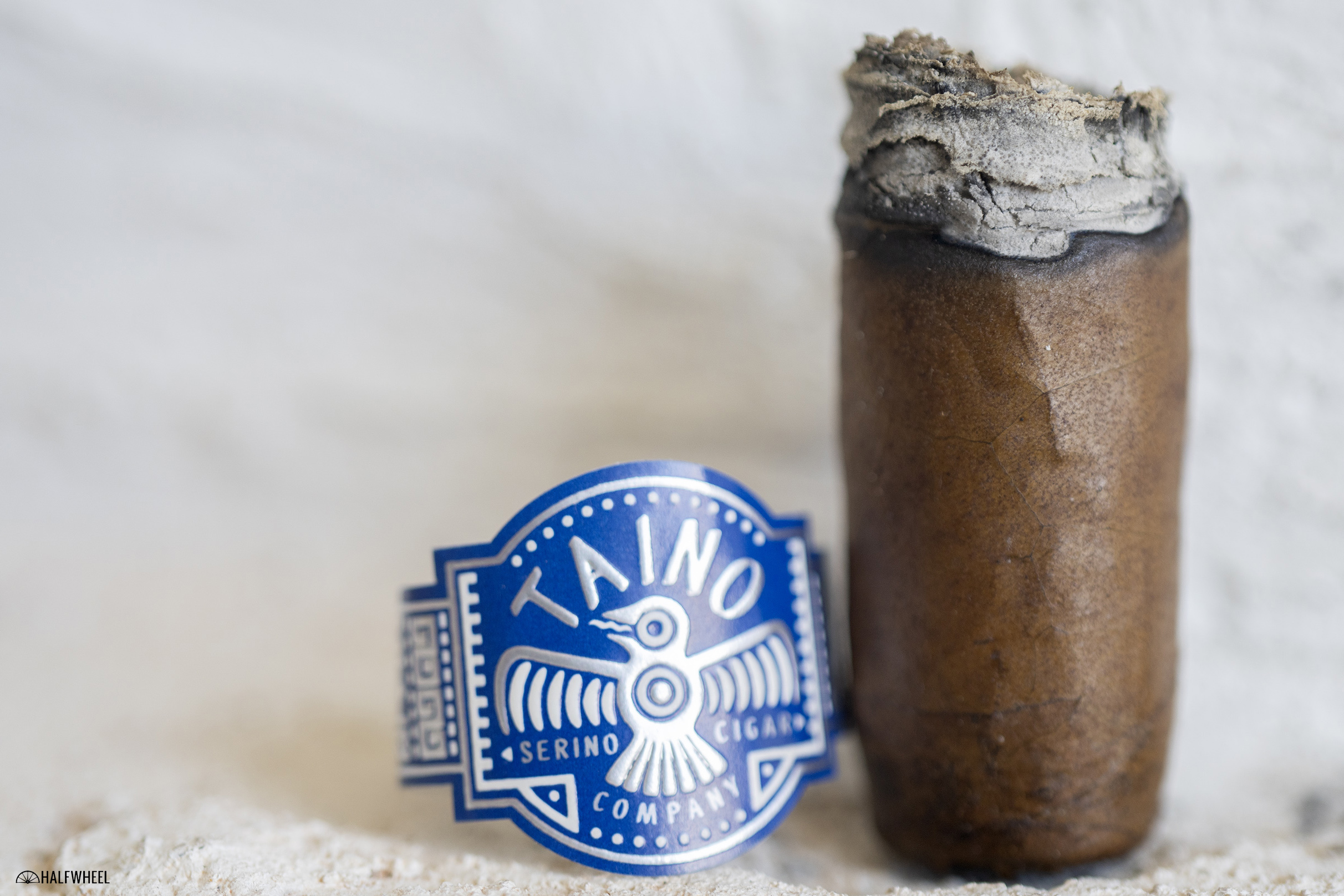 After more than 15 years of smoking cigars, there are brands I turn to when I want a medium-bodied, full-flavored cigar, a list that includes Davidoff, Illusione and various Cubans. While Serino is not close to the top, the brand is quickly moving up my list and the Taíno Heritage Hamaca is the newest example of why. The profile includes not only some distinct main flavors of creamy almonds and cedar, but also a litany of well integrated secondary notes including vegetal, honey sweetness and mineral saltiness that is present for the entire smoke. A very good cigar that is well worth the effort of tracking down for fans of medium-bodied cigars.