It is said that the truth will set you free, and while that may be the case, the name The Truth caused some headaches for Robert Caldwell of Caldwell Cigar Co., Matt Booth or Room101 and Abdel Fernández of AJ Fernández Cigar Co.

That is the name that the three cigar makers gave to their collaboration that was shown off at the 2017 IPCPR Convention & Trade Show earlier this year; however, that is not the name that the project shipped with. Faced with a trademark issue from Tatuaje Cigars, Inc.— which owns a trademark for La Verite, which is translates to the truth from French—they changed the name of the new line to a much more generic but easier to remember The T., with the period.

“(It’s) Short for Tantric Undulation and Ten Thousand Papercuts, among other things important to Matt Booth,” said Caldwell in a text to halfwheel. 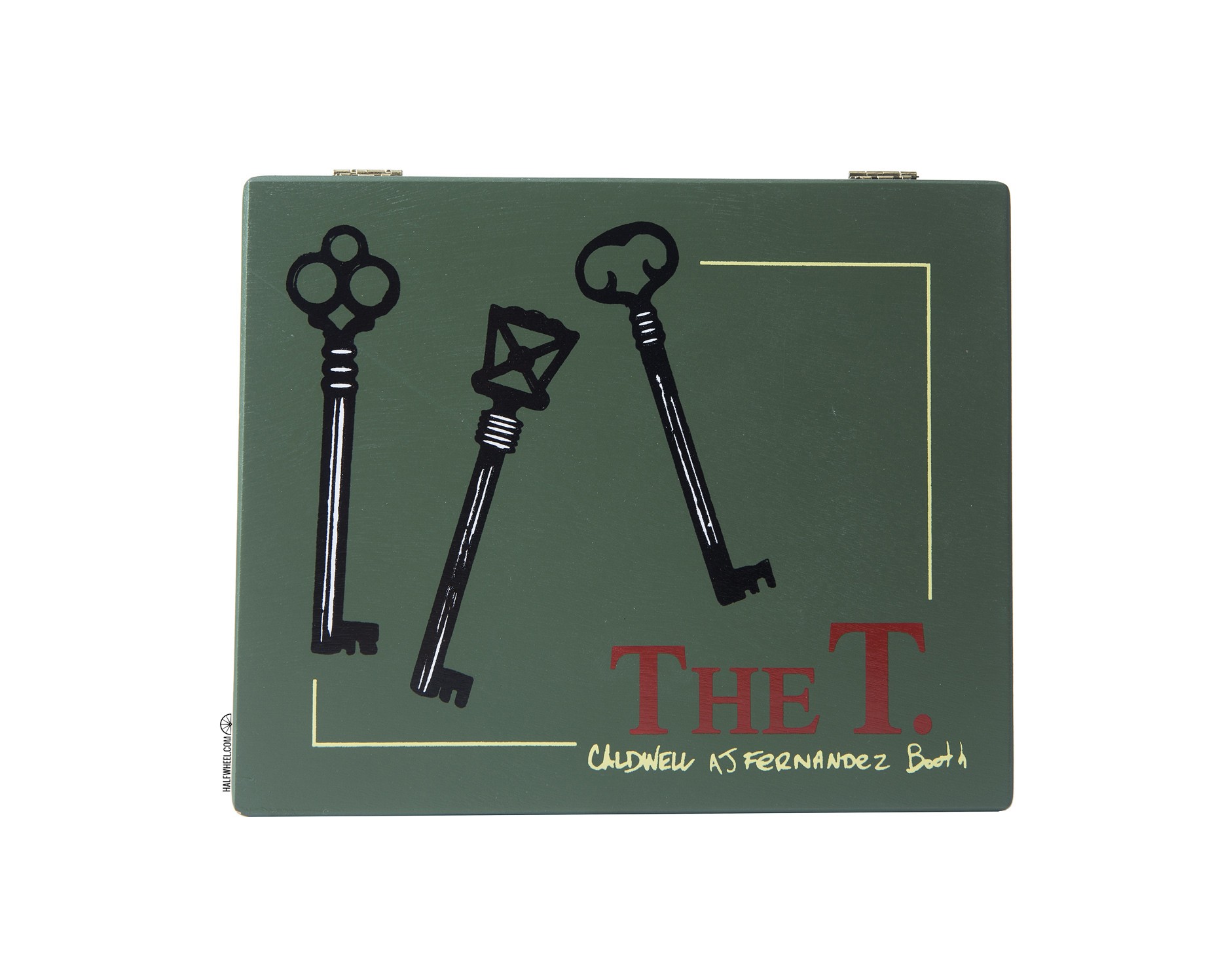 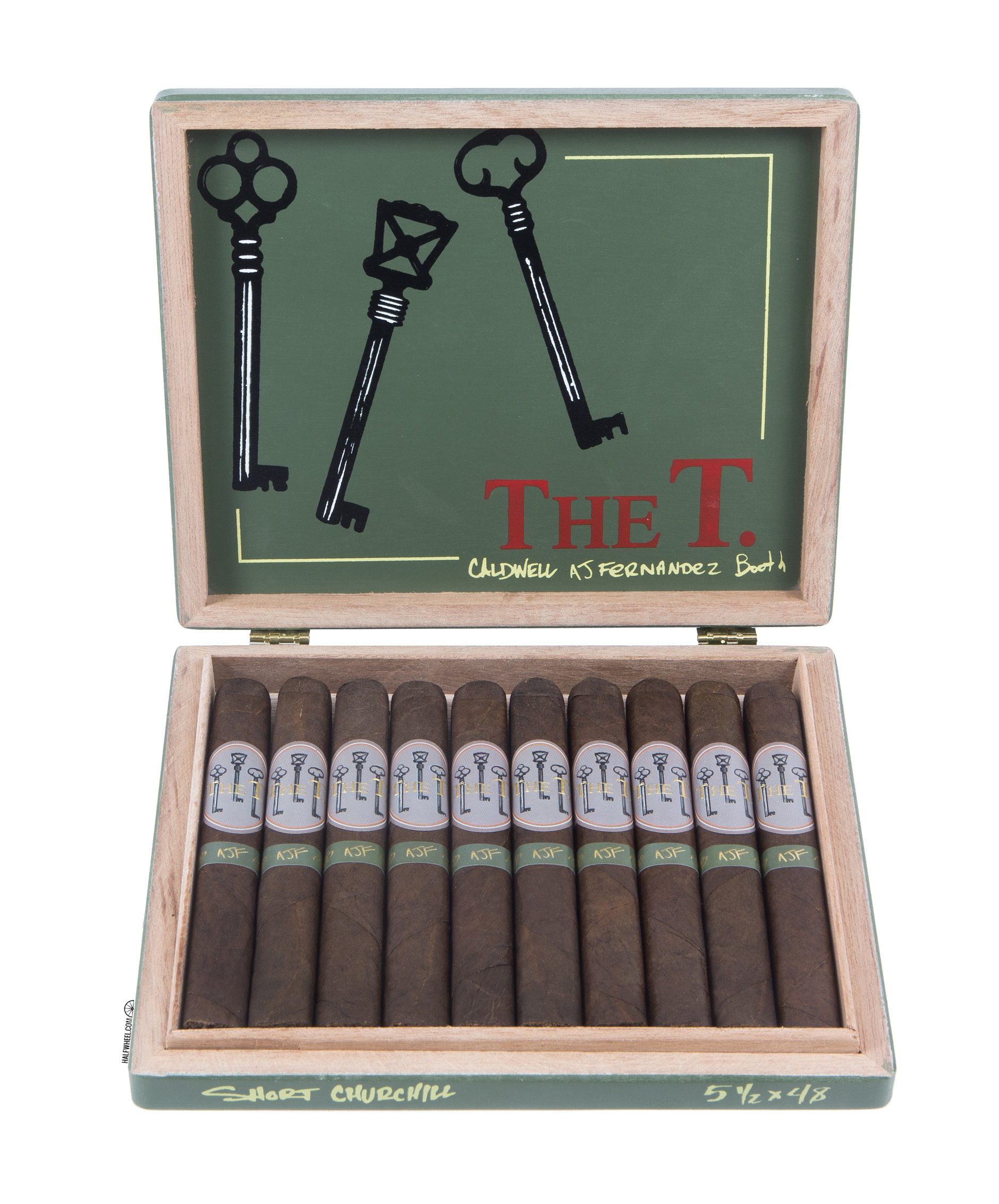 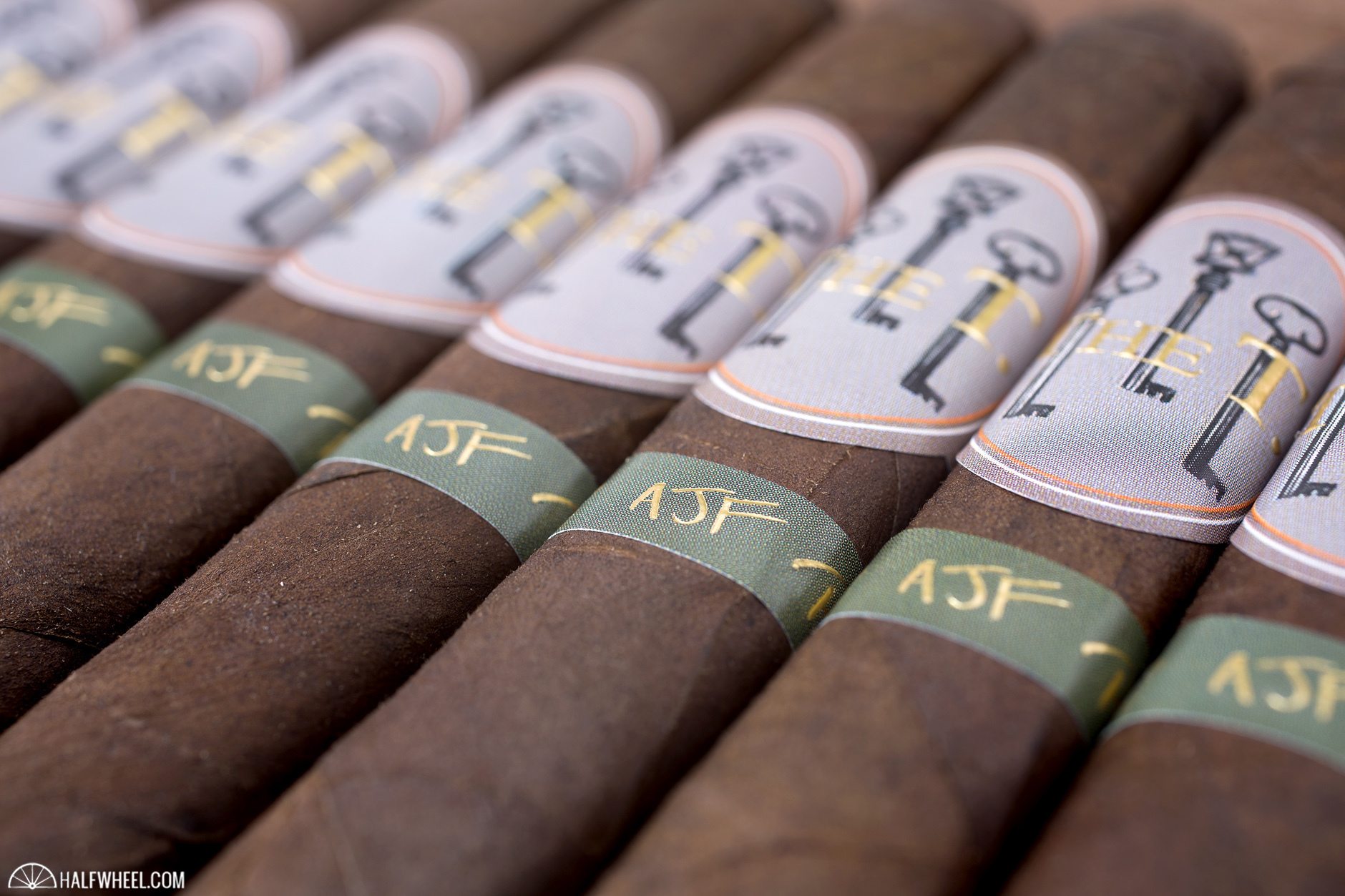 The T. is a five-viota line incorporating a Nicaraguan wrapper and binder, with all Nicaraguan tobacco used in the filler as well. The cigars are being rolled at Tabacalera AJ Fernández Cigars de Nicaragua S.A. in Nicaragua, and the line is limited to only 100,000 total cigars according to an article in Cigar Aficionado.

There are five different vitolas in The T. lineup so far, with all but the Short Churchill packaged in boxes of 20. 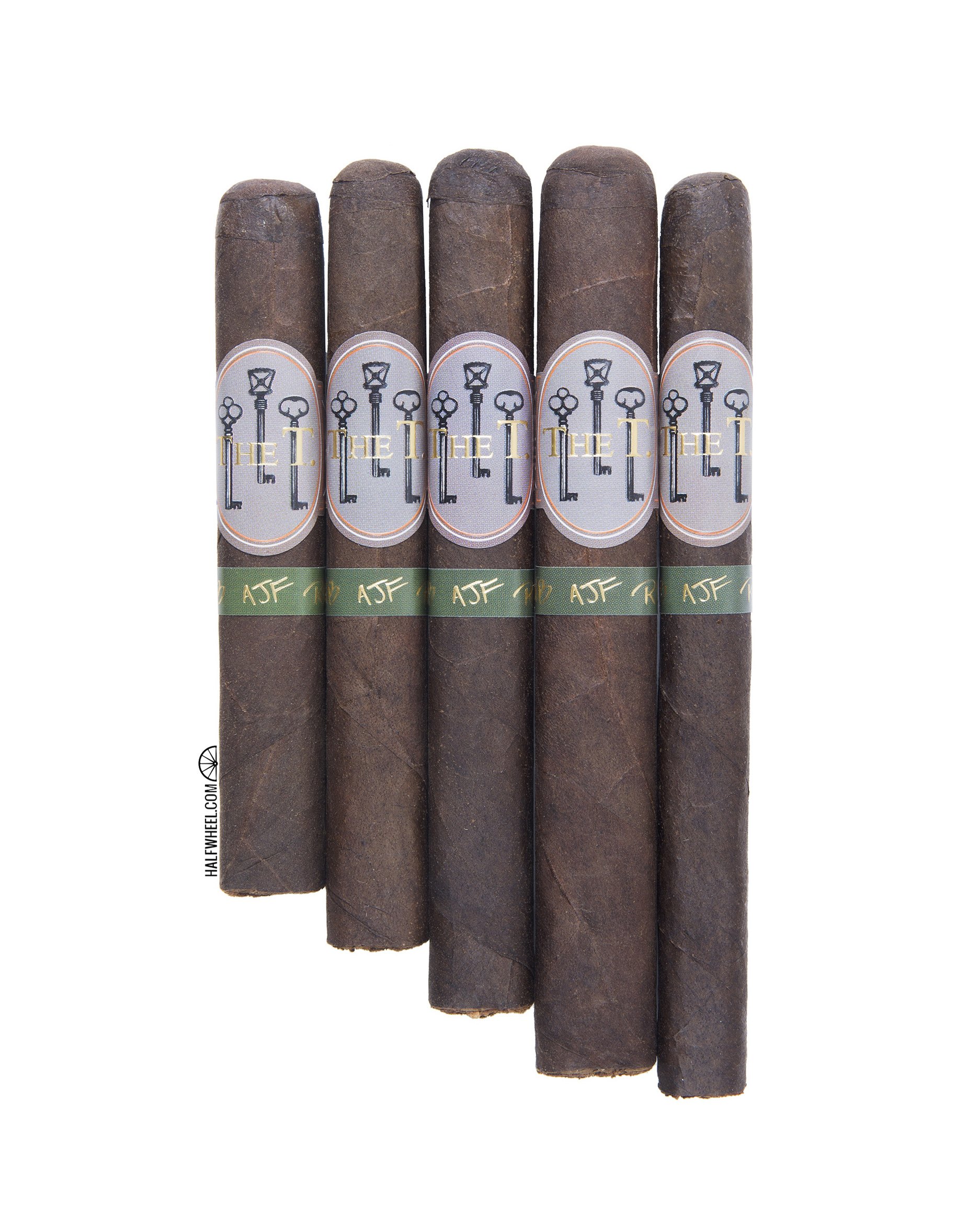 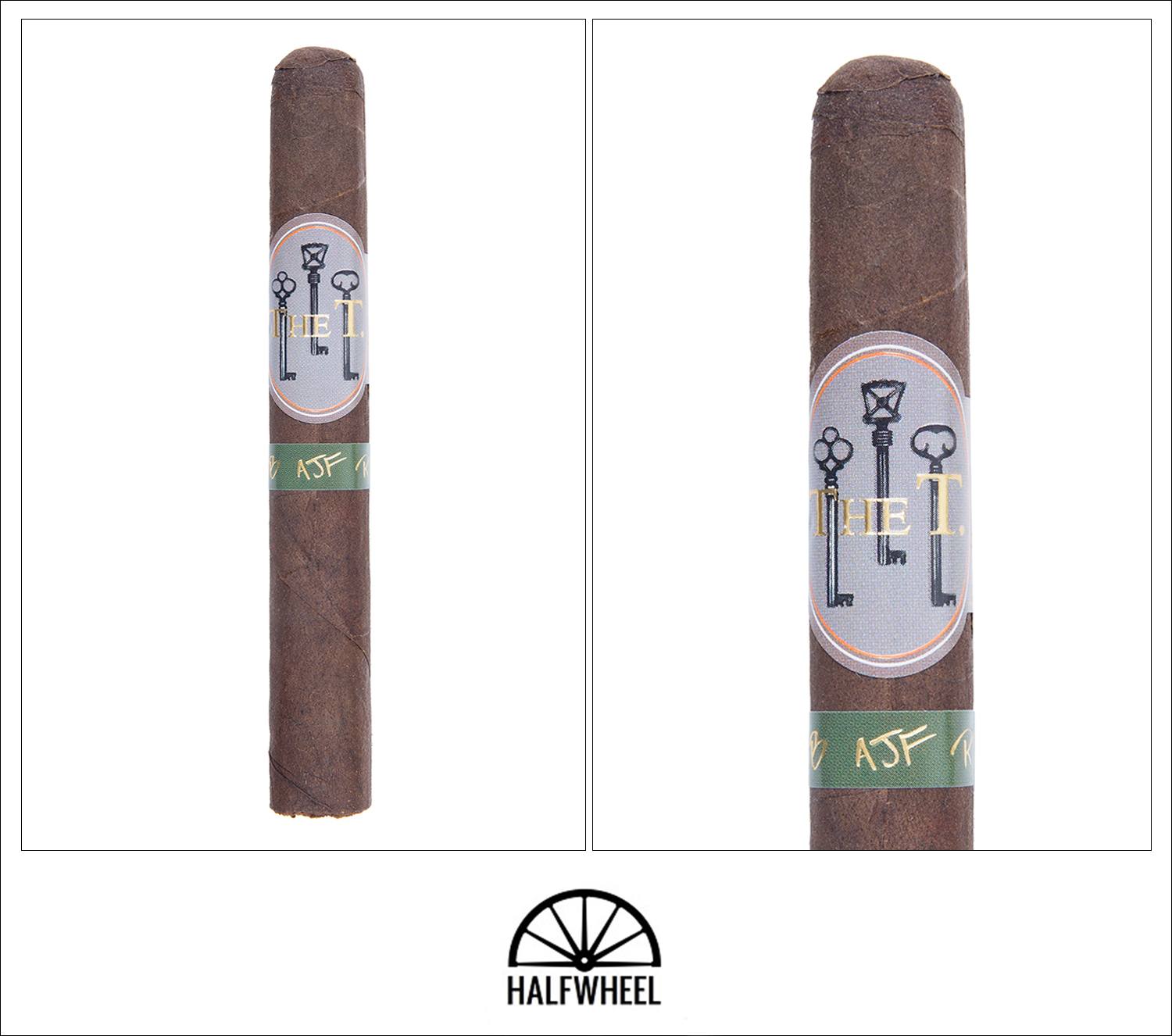 The T. is extremely appealing visually, with a dark espresso bean brown wrapper that features a bit of tooth as well as some noticeable oil. As with all of the violas in the line, there is a not-quite extreme box-press and I can see some significant  veins running up and down the length of the cigar. Aroma from the wrapper is a combination of aged oak, earth, leather, manure, popcorn and vanilla sweetness, while the cold draw brings relatively tame flavors of orange citrus, hay, leather, ground coffee and slight black pepper.

It starts off immediately with dominant flavors of creamy cashews and dark chocolate, followed closely by other notes of freshly roasted coffee, hay, oak, barnyard and a great nutmeg sweetness. There is some very obvious lemon citrus on the retrohale, along with some distinct red pepper on the finish that really sets each other off nicely. Construction-wise, both the burn and the draw are excellent after a simple straight cut and the smoke production is massive off of the foot, with a smell that reminds me of leather. The overall strength starts off fairly light, but quickly ramps up to close to the medium mark by the time the first third comes to an end. While not strong enough to take over the profile, both the red pepper on the finish and the lemon citrus on the retrohale continue to be major factors during the second third of the The T. Short Churchill. The dominant flavors have changed as well, with the creamy cashew note taking a back seat to a new barbecue note. Immediately following are flavors of creamy oak, leather, ground coffee, toffee and tobacco, along with even more of the nutmeg sweetness that only seems to be getting stronger. Both the burn and draw continue to impress, while the smoke production remains quite high. Strength-wise, The T. hits a solid medium by the midway point of the cigar, but seems to stall out there for the rest of the second third. 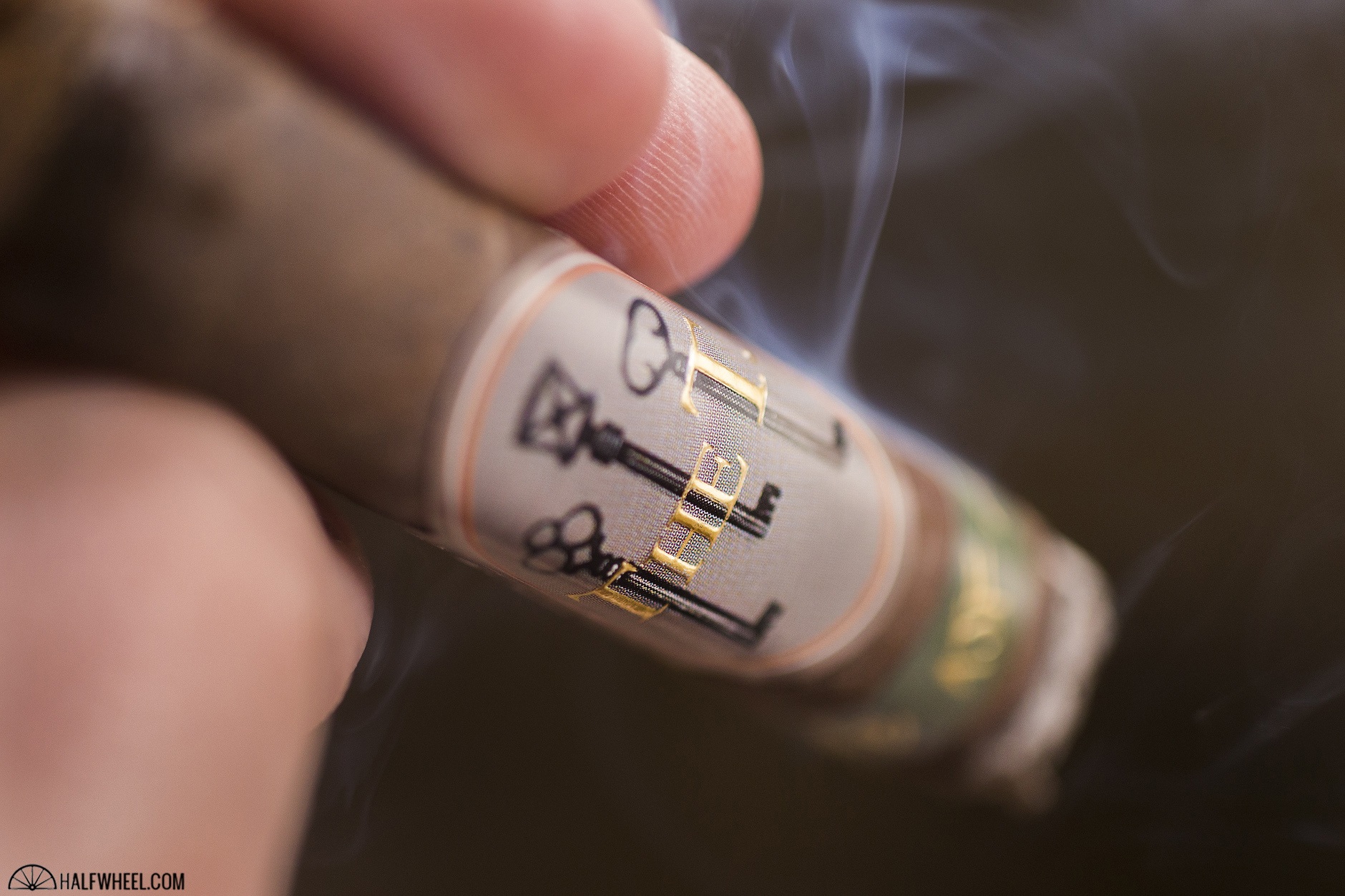 The final third is a virtual carbon copy of the second third, with the same barbecue note dominant as well as the same red pepper on the finish and strong lemon citrus on the retrohale. There is still some nutmeg sweetness in the profile—albeit noticeably reduced from the amount that was in the second third—as well as other flavors of hay, tea leaves, popcorn, leather and espresso beans. While the draw remains excellent, the burn wavers a bit, forcing me to touch it up a couple of times, although it is nothing more than a minor annoyance. The overall strength begins to ramp up noticeably in the last inch or so and does hit a point slightly above medium before I put the nub down with less than an inch to go. I don’t mind saying, I was a bit skeptical when I first heard of this three-way collaboration, but my concerns turned out to be groundless. In fact, I love just about everything about this release: the flavors are distinct and complex, the construction on all three samples was excellent and the balance was no slouch either. I don’t care what Caldwell, Booth and A.J. Fernandez call their joint project, I call it a good cigar.