For as crowded as the American cigar market is, there are even more cigars that might never make it stateside, and that goes beyond Cuban cigars. One hotbed of brands yet to cross the waters as of late has been the Dominican Republic, a country with an established track record of making premium cigars and growing tobacco.

One of the brands who had previously been sold only the island is Suriel Cigars, a company that launched in October 2014 but that just recently began marketing to U.S. retailers. The company’s portfolio currently has two cigars, the Robusto Day & Night and the Toro Majestuoso, both of which are made in the Dominican Republic at the Kelner Boutique Factory, which is owned and operated by Hendrik Kelner, Jr. 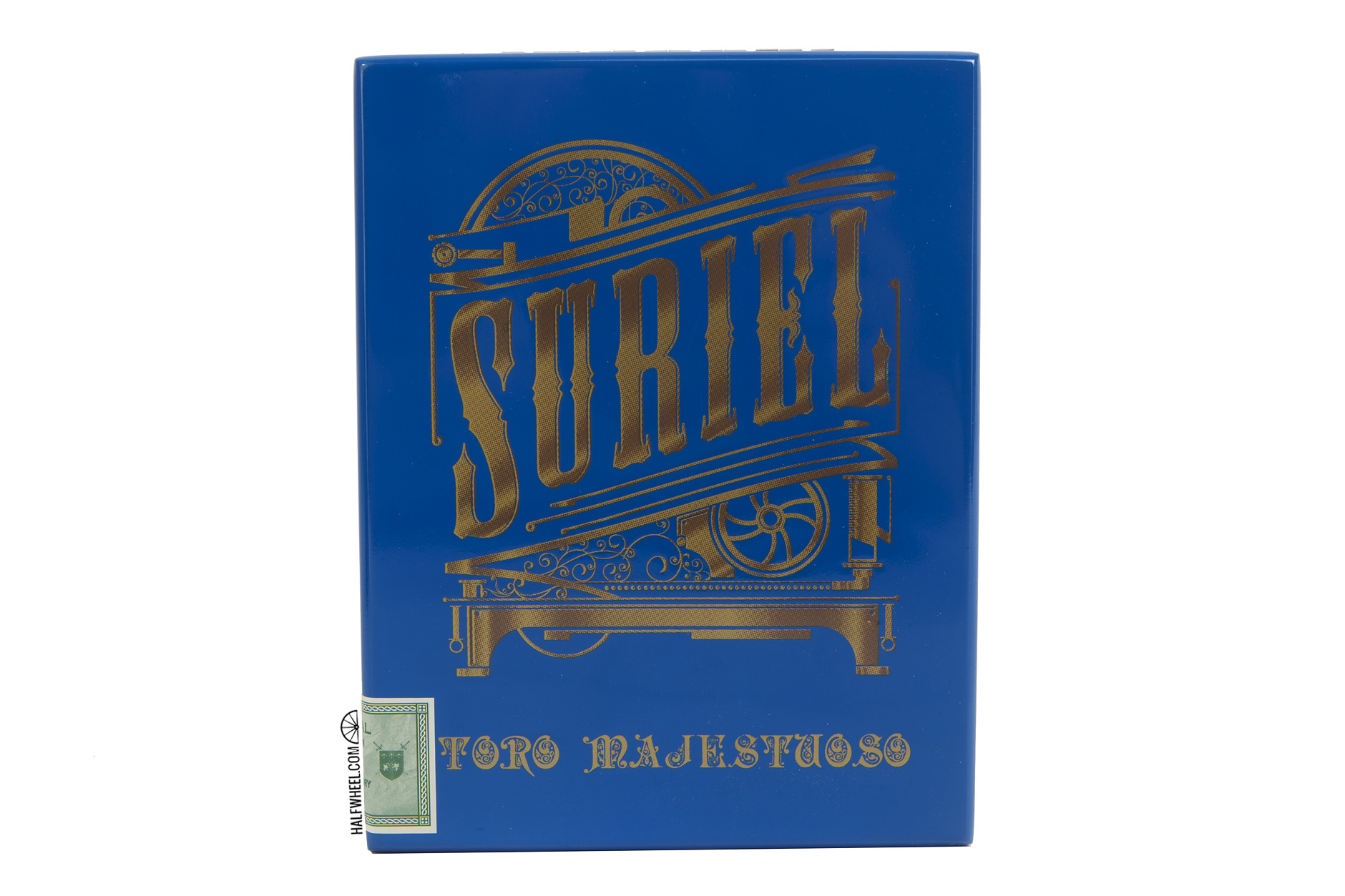 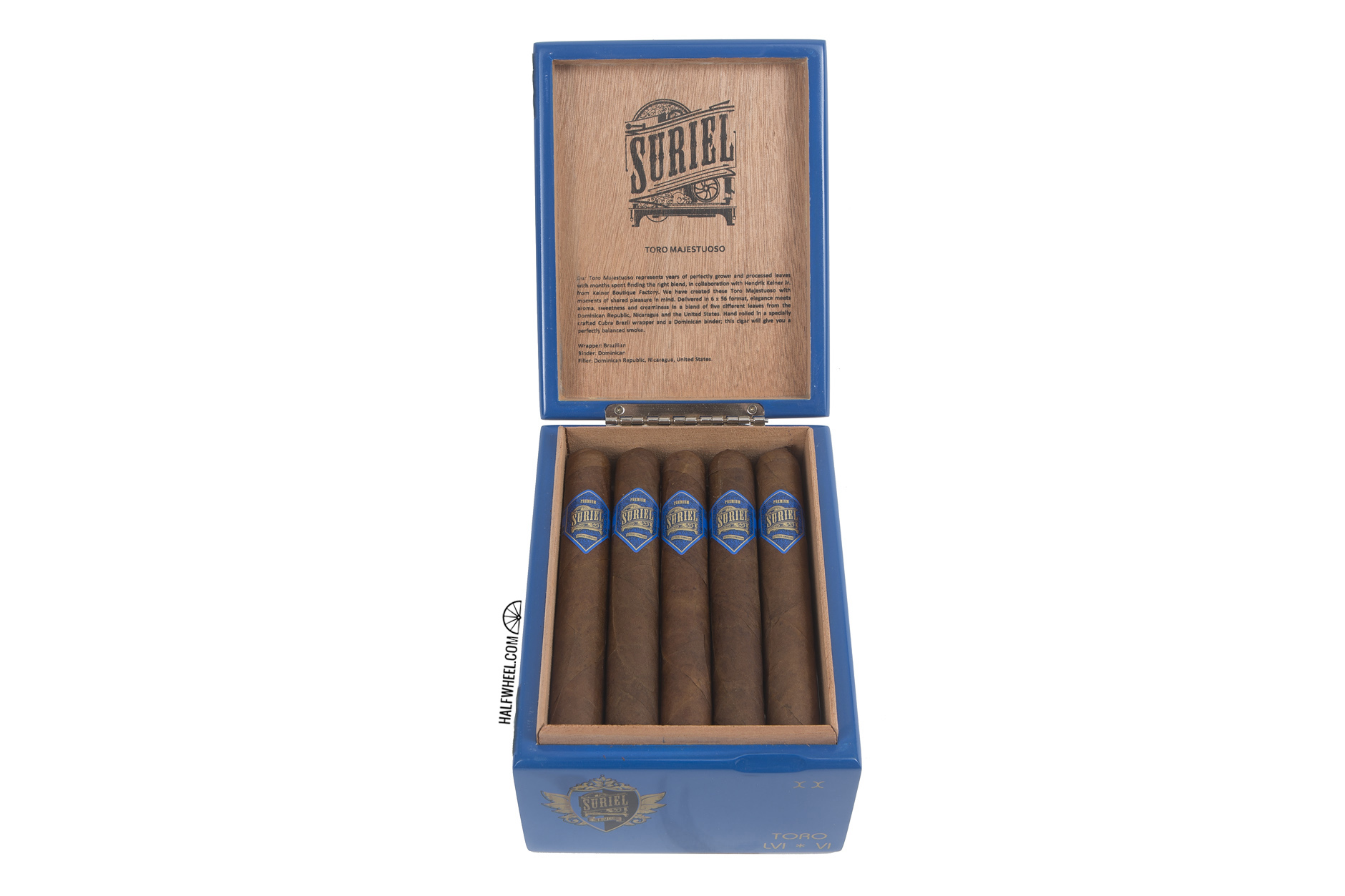 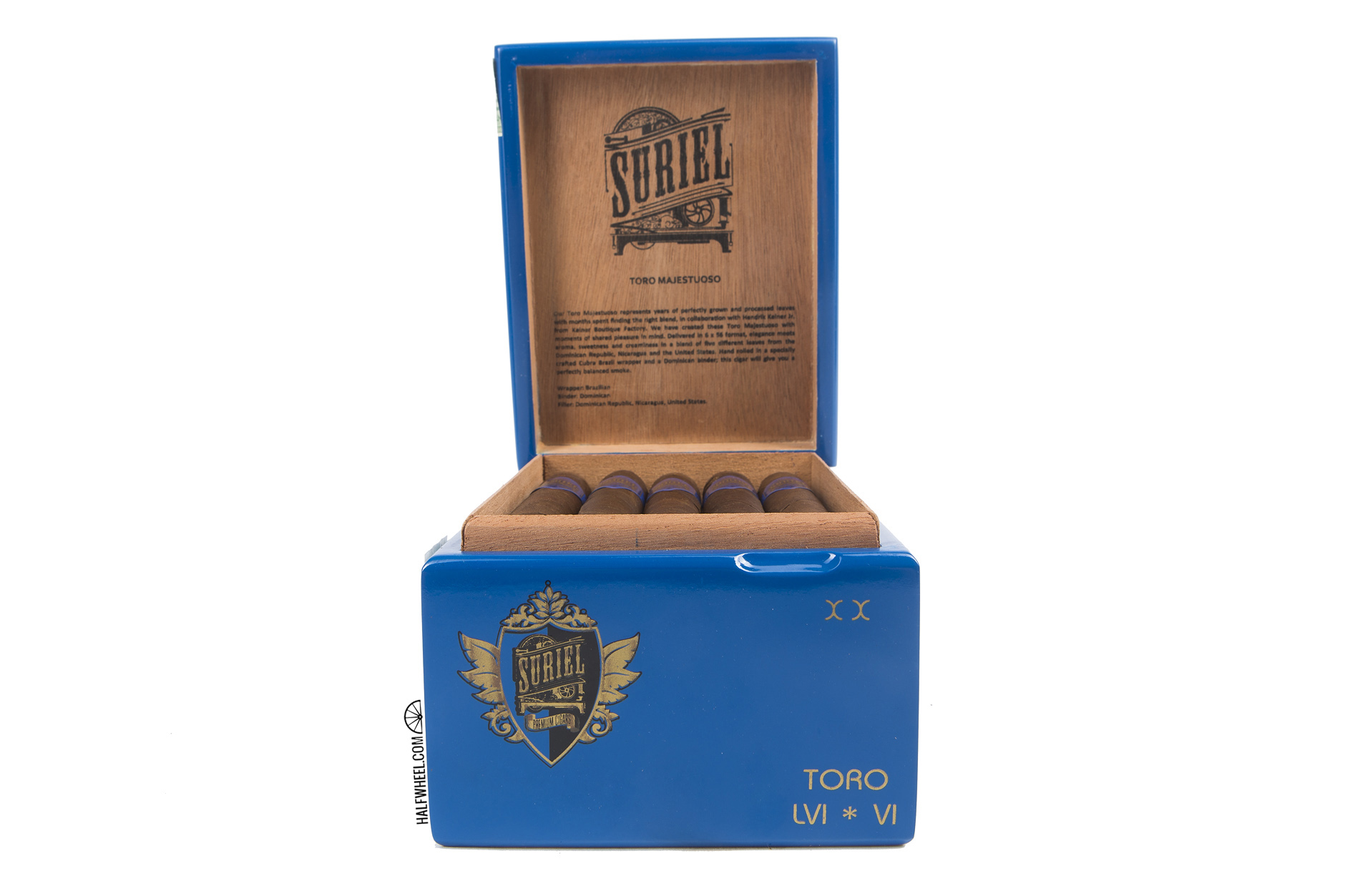 Company founder Uriel Suriel decided to release both of those cigars for the U.S. market, though one is getting a bit of a revamp. The Toro Majestuoso is heading stateside with a new filler blend from the original, with Dominican HVA from Leo Reyes, Nicaraguan tobacco from the Condega region, Peruvian pelo de oro and what’s called Pennsylvania “8 percent,” which refers to its unusually high nicotine content.

The binder comes from the Dominican region of Cotuí and grown by Monika Kelner, Hendrik’s sister, while the wrapper is a Brazilian-grown Cuban-seed leaf. To further differentiate the U.S. version, the cigar also sports a pigtail cap.

The Suriel is a sizable cigar, dense in the hand with a dark brown wrapper a decent vein structure and a noticeable amount of tooth. It certainly appears to be a well-rolled cigar, as there are no visual distractions that would suggest otherwise, and when squeezed, is on the firm side with no soft spots. The cap is certainly interesting, as the seam lines go just a bit lower than normal, while the pigtail cap is generally a bit sloppy; it was missing on one cigar completely, likely damaged in travel somewhere along the way, while on the second sample it just seems sort of lazily applied. The third cigar I smoked for this review was the only one where it looked fairly well applied, but even then it seemed to be brought up from the wrapper a bit oddly. From the foot I get a distinct note of ground coffee with supporting notes of dehydrated apple and a subtle undertone of lumberyard wood. The cold draw errs just to the firm side of the meter, offering a bit more of the coffee note along with some cereal grains and leather.

It only takes one or two puffs for the Suriel Toro Majestuoso to go from nondescript to offering a good bit of pepper that wakes up the senses quickly and efficiently. It’s by no means overpowering, and dare I say it leads with a fairly familiar Dominican profile in terms of the specific terroir notes. I keep waiting for the Pennsylvania “8 percent” to show up, but so far it has yet to make an appearance. Just a touch of sweet cream begins to get introduced in the first inch, prominent for a few puffs before falling back a bit and letting the black pepper regain the lead that shows good complexity and balance, which is now marked by a bit of mineral and chalk-laden earth that ends up lingering on the center of the tongue for a bit. While the draw is a touch firm and restricts the air flow a bit, there is still plenty of smoke coming off the foot, and I’m feeling only slightly fatigued by the restriction. The first clump of ash comes off just shy of an inch in length, with a crack developing in it much like what an axe does to a tree, though it does its best to hold on, initially thwarting my attempt to shake it off until I take another draw and warm up the core a bit. The creaminess from earlier has returned a bit more noticeably, and the cigar sits just shy of medium in terms of strength and flavor as it prepares for its second third, with a bit more pepper and a suggestion that the strong Pennsylvania component might be making its first appearance. 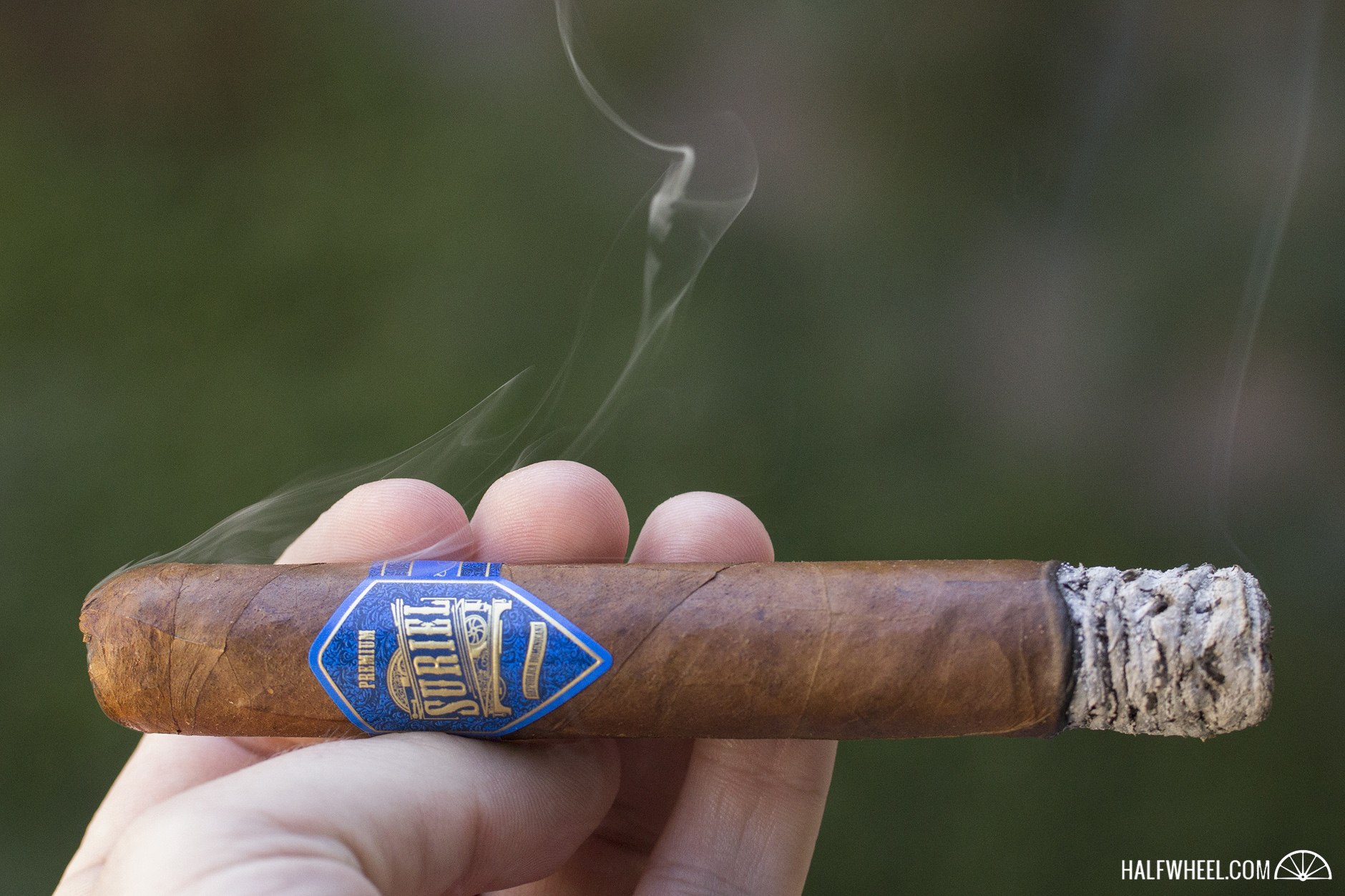 While the Suriel Toro Majestuso hasn’t been a pepper-laden cigar so far, it’s beginning to show that it hasn’t completely left out that component, as the flavor dries out just a touch and a bit more pepper comes forward along with dry wood and chalk-infused earth. It’s almost easy to overlook if you’re distracted or drinking something that might mask the flavor a bit, but it’s in this section where I get what I assume is the strong Pennsylvania tobacco that is part of the cigar’s selling points. For me, the nose is where the pepper is most prominent, as retrohales are fairly full but still manageable. From there the cigar gets to be a bit linear, as the complexity starts to fade away and I’m left with a profile that is somewhat nondescript at points. As the pepper fades away, there’s some generic tobacco and backing spices, with leather making an occasional appearance but not enough to really call it a regular player. I’m also getting just a touch of dried mango from a citrus note that lingers in the background. Technically, the cigar performs very well: the burn line is fairly straight and even, and smoke production has yet to be a concern. Pepper starts mounting a charge back towards the nose as the band comes off, with the palate getting a bit in the final puffs of this section. One of the Suriel Toro Majestuoso’s most noticeable changes heading into the final third is how the smoke begins to build up a bit in body. It had been a bit thin at points in the second third, but each puff of this section seems to firm it up a bit. It’s not becoming a thick smoke by any means, but there’s more to it texture wise than it was before. With the band removed I begin to get another round of what I presume to be the Pennsylvania tobacco, though it comes across much harsher than it did on the first go round, stinging the nostrils and being more aggressive towards the back of the throat. Interestingly though, I have yet to feel much—if any—of a nicotine kick from this cigar. The final inch and change doesn’t provide any relief from the growing harshness of the cigar, and each successive puff gets less and less inviting. A charred flavor comes along as well; it’s dry and burnt somewhere between toast, wood and at its relative best point, a bit of steak. While the cigar continues to burn without issue, the flavor becomes a significant detractor from the experience, resulting in an early conclusion as there’s still more than an inch of smokeable tobacco left when the cigar gets laid to rest. 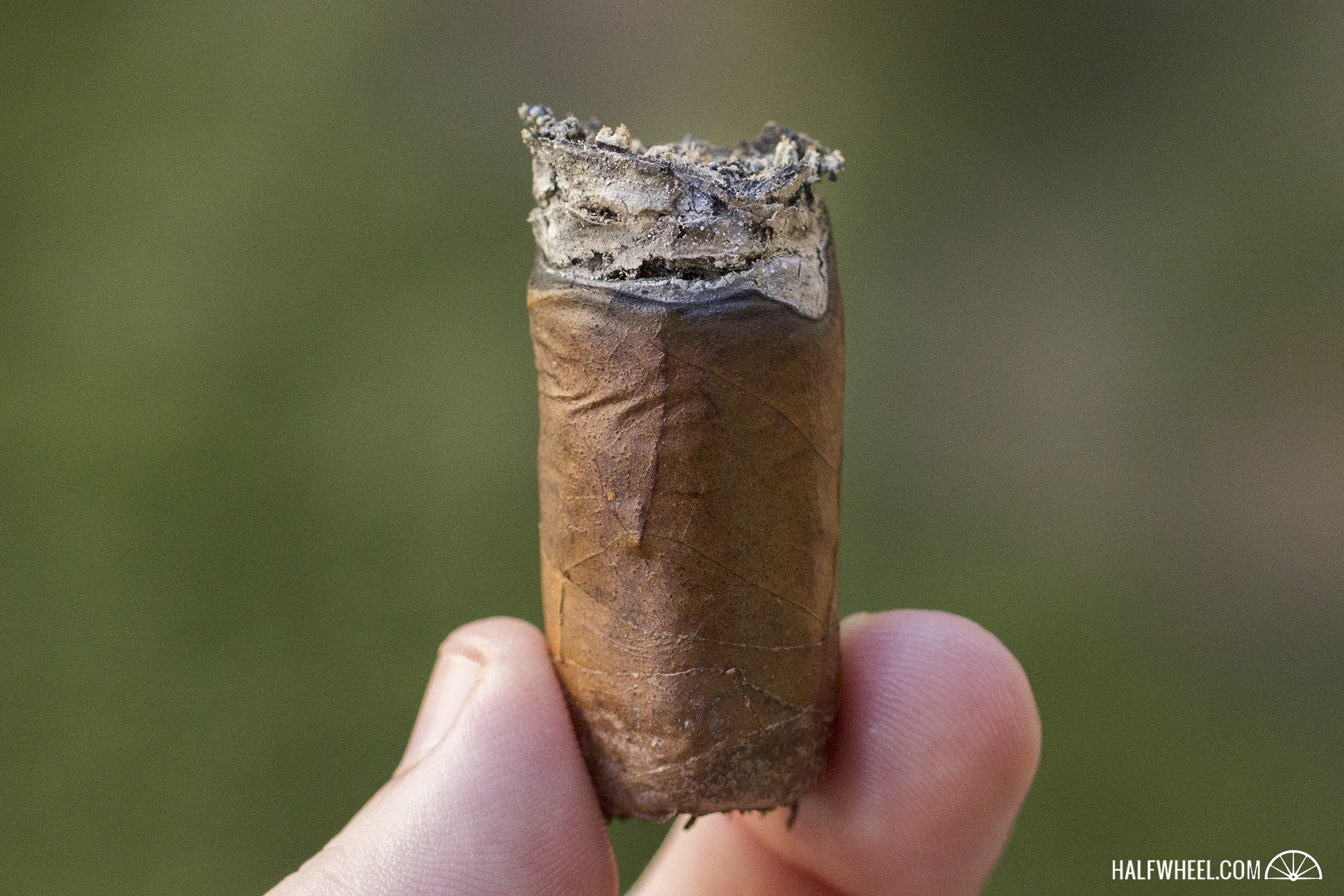 If there was one thing that the Suriel Toro Majestuoso struggled with, it was being able to find that balance between letting the Pennsylvania tobacco overpower the cigar and delivering consistently good flavors when that particular component wasn’t in the spotlight. My individual scores for the cigar ranged a bit more than normal, while my scores for an individual cigar varied a bit as well as it progressed fro one third to the next. While I can’t say there were times where I absolutely loved the cigar, there were several where I really liked it as well a few where I was simply not a fan of it. Balance was my biggest gripe with this cigar, with consistency from sample to sample also a bit concerning. However, there are enough interesting spots to make it worth trying, and certainly a company to monitor as they expand into the U.S.