In 2011, Oliva’s STUDIO TOBAC released the first of three yearly samplers, a six-count World Tour Sampler containing various-one off cigars, rereleases and taste blends. The samplers were given to customers who made box purchases at STUDIO TOBAC events around the country, and while at least one cigar in each sampler was only available in the samplers, a number of cigars that debuted in each sampler were later released in larger numbers at a later date.

Included in the 2013 STUDIO TOBAC World Tour Sampler was one each of:

Blend-wise, the 6 x 50 STUDIO TOBAC CTP-013 is composed of an Ecuadorian sun grown wrapper covering Nicaraguan tobacco in both the binder and filler. The letters and numbers in the name of the cigar designate two very different things: the SGP stands for Sun Grown Prototype while the 013 indicates that the cigar is from the 2013 sampler.

I have to hand it to the STUDIO TOBAC crew, the SGP-013 is one incredibly smooth cigar, with excellent construction the entire way through. Unfortunately, for me, the actual flavors in the profile leave a bit to be desired, and the sweetness that I tasted every once in a while sadly never amounted to more than an afterthought. Still, it is a cigar that is well worth smoking, especially if you love leather notes, and a good addition to the sampler.

Like the first versions I reviewed, this STUDIO TOBAC SGP-013 is covered in a slightly reddish brown wrapper that that features very little oil and feels like rough sand paper when I run my finger down the length. There are very few veins visible, and the cap looks to be a little sloppily applied. Aroma from the wrapper is a combination of barnyard, hay, dark chocolate, sweet oak, raisins and pepper, while the cold draw brings flavors of huge dark chocolate, bitter espresso, cedar, hay, nuts and sweet raisins.

Starting out, the STUDIO TOBAC SGP-013 features a dark and bitter cocoa as the dominant note, followed by flavors of anise, Spanish cedar, earth, leather, espresso beans and a touch of floral. The raison sweetness from the cold draw is not only present, but quite distinct, and combines very nicely with a strong but not overpowering amount of black pepper on the retrohale. The second half of the cigar features the same basic flavors, although there is a touch more cedar present as well as less black pepper overall, while I also picked up a very slight banana sweetness that lasted for only a few minutes before fading into the background. 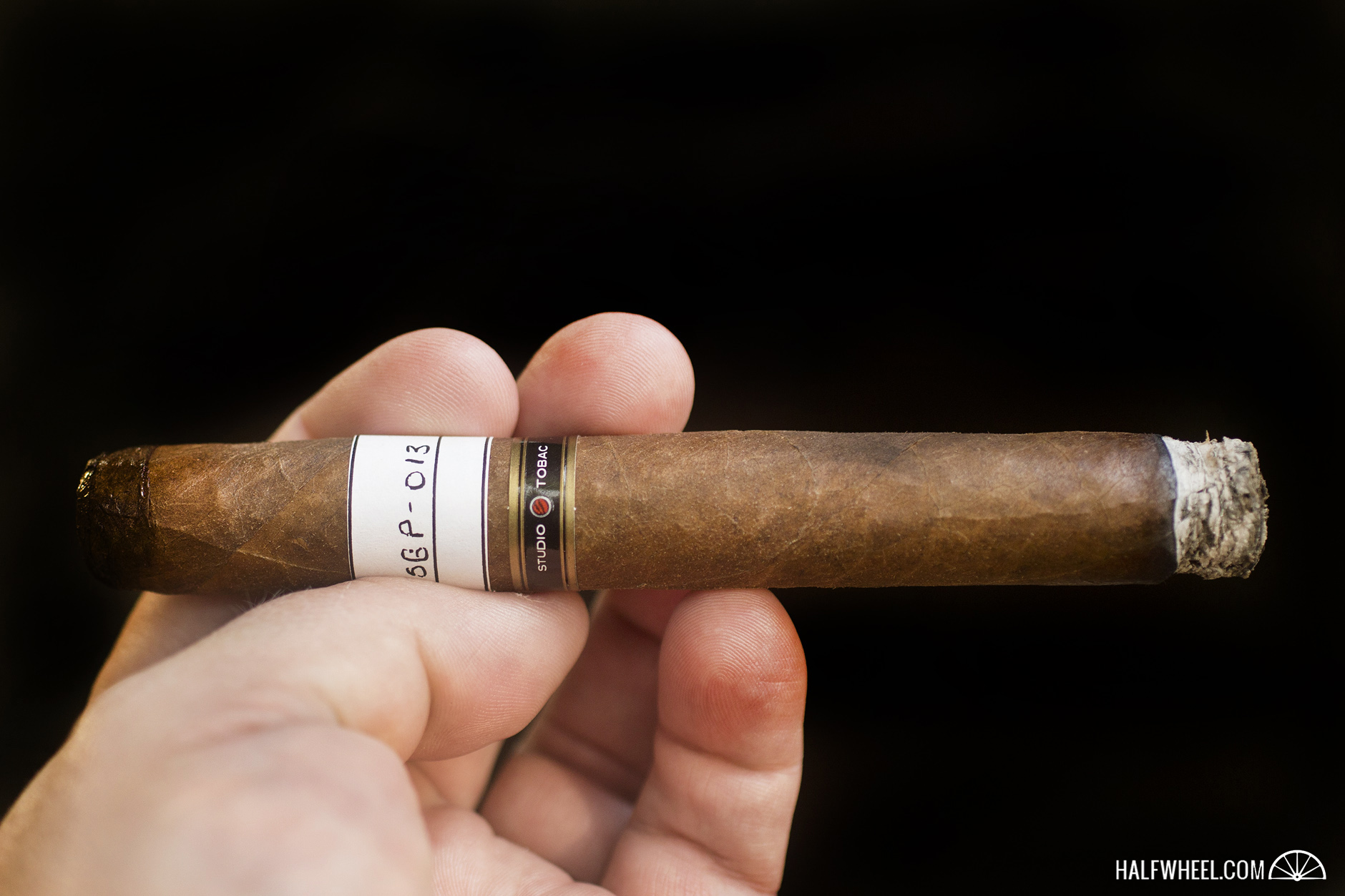 Construction-wise, the STUDIO TOBAC SGP-013 features and excellent draw with just the right amount of resistance for me. The burn starts razor sharp in the first third, but wavers a bit in the final two thirds, albeit never bad enough for me to have to correct it. The smoke production is well above average and the overall strength ramped up to a mildish medium very early on in the second third before stalling out and remaining there for the rest of the cigar.

To say that time has been good to the STUDIO TOBAC SGP-013 could possibly be the understatement of the year. Where the blend was originally somewhat bland and unbalanced, the aged version is complex, balanced and full of constantly changing flavors, including a wonderful raisin sweetness. Not every cigar will get better after three years of age, but this one definitely has.