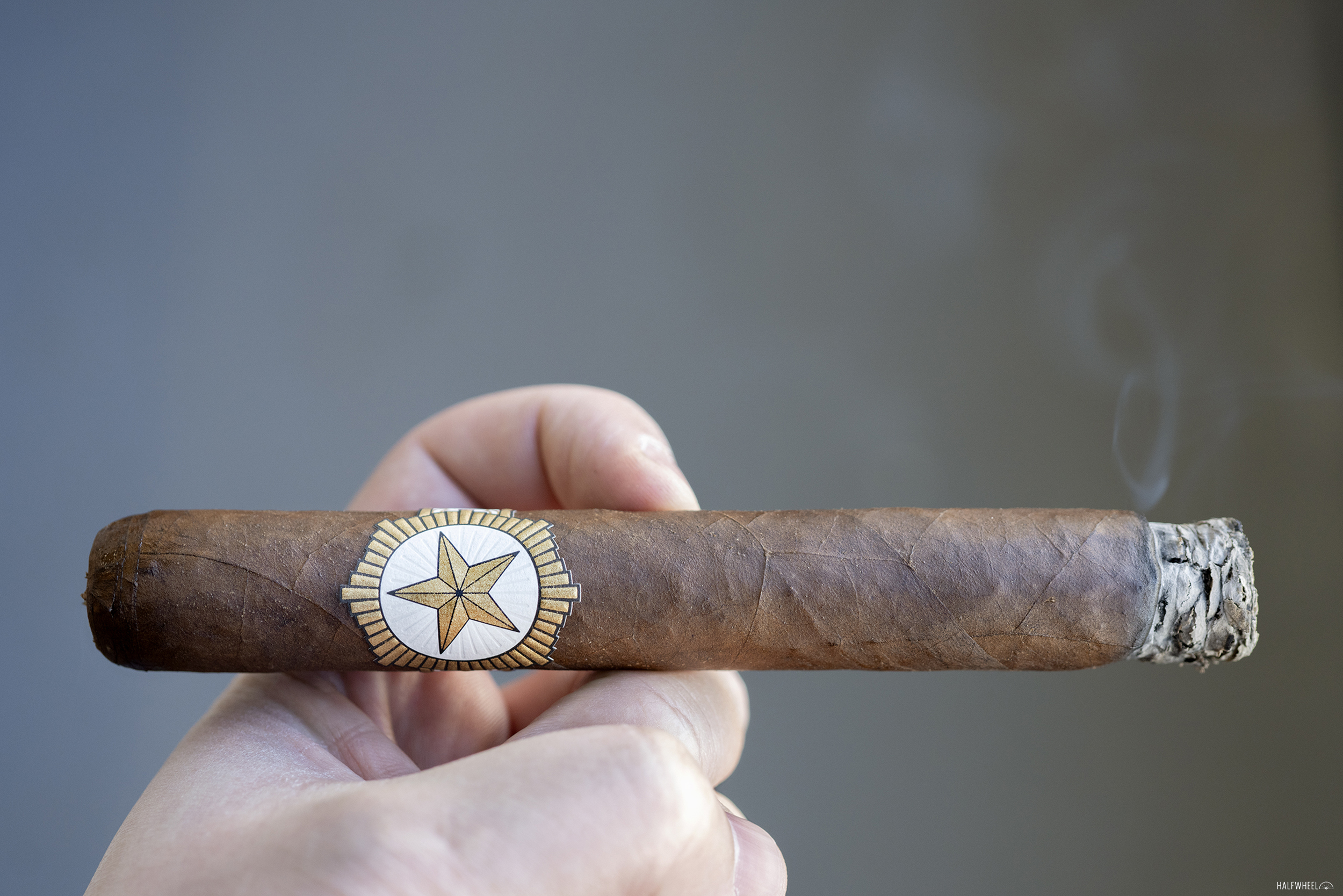 A little less than two years ago, Steve Saka, founder of Dunbarton Tobacco & Trust, told the world that he would announce what he believed would be the “most controversial cigar” of 2021. What he was talking may not have been the most controversial in my eyes, but StillWell Star was different.

It’s a line—so far five cigars that are all 6 x 52 toros that all use the same wrapper and binder—but include different types of pipe tobacco in the filler. When the line debuted in 2021 there were four different blends, but last year Saka announced that he would add a fifth as a limited edition for the holiday season. 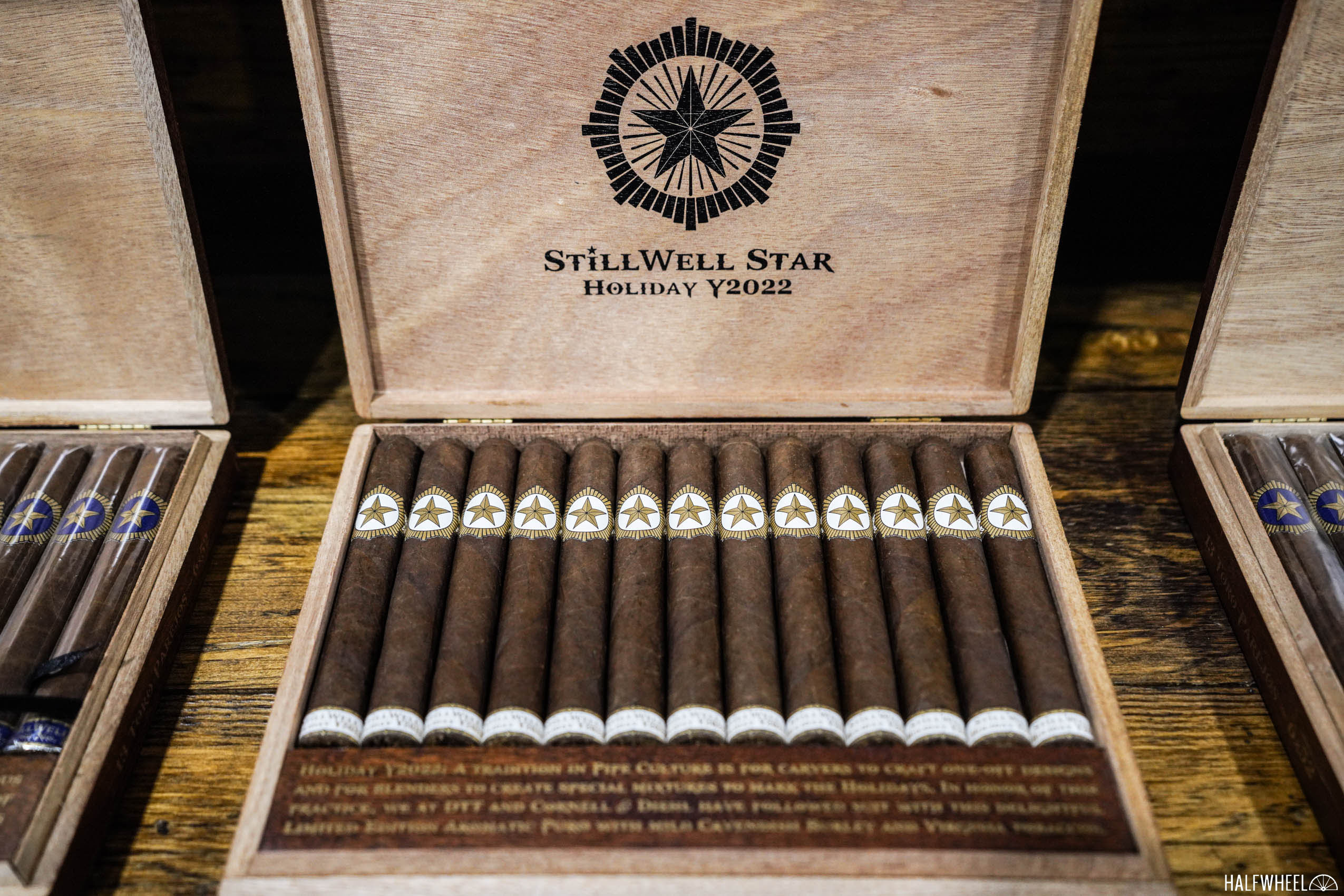 “A tradition in Pipe Culture is for carvers to craft one-off pipe designs and for blenders to create special mixtures to smoke and celebrate the Holidays,” said Saka in a press release. “In honor of this practice, it was always my intention to follow suit within our StillWell Star line of puros. This year’s release is a delightful aromatic puro with a carefully balanced selection of mild Cavendish Burley and choice Virginia tobaccos incorporated. Unlike the Aromatic No. 1 in the core line, this Holiday release does not feature a dulce cabeza, however the tobaccos themselves are wonderfully sweet to the tongue – the flavor and aroma are nothing short of exceptional. Personally, I find the smoking experience to be like sipping a cup of hot chocolate with marshmallows fireside.”

The line is made at Joya de Nicaragua and the pipe tobaccos come from Cornell & Diehl, one of America’s largest pipe tobacco companies. I feel like I should disclose that I know basically nothing about pipe tobacco. I’m not a pipe smoker and my understanding of pipe tobacco is whatever bits of information I’ve picked up over the years, largely from when cigar companies have tried to be associated with the pipe tobacco business.

While Dunbarton Tobacco & Trust’s position has been that you can store these cigars in a humidor alongside other cigars, we opt to store cigars like these in a separate, Boveda-humidifed bag. The first time I opened up the bag, I was surprised that I didn’t smell any pipe tobacco-like aromas, though I oddly smelled it after a few cigars had been removed from the bag. One of the reasons why I think you probably can store these cigars alongside other cigars is that they are stored in cellophane, which certainly helps to reduce some of the aroma from escaping. As for the appearance, it’s a pretty pale wrapper, though I can see some oils upon closer inspection. The band reminds me of the Dallas Cowboys star, as it is football season when I’m reviewing this, after all. Once the cigar is removed from cellophane and gets close to my nose, it’s quite apparent this cigar is not made with just cigar tobaccos. There’s a sweet chocolate aroma that reminds me of smelling some pipe tobaccos. While that aroma is very distinct and stronger than the wrapper’s aroma, I feel like the wrapper tobacco itself is mainly a medium mixture of acidity and leather. Whether it’s because of where the different aromas are coming from or because of the type of aromas, it’s pretty easy to separate the cigar-like and pipe tobacco-like smells. If there was any doubt about whether pipe tobaccos are part of this cigar—there wasn’t—one smell of the foot makes it very clear, as it smells like a cup of hot cocoa would. The aroma is visceral in a way that I don’t find cigar tobaccos to smell, almost as if I might be confused with whether this was coming from tobacco or from a cup of hot cocoa. Similar to the wrapper aroma, I can find some hickory and acidity from the other tobaccos. The cold draws are somewhat tight, but not to the point where I’m concerned, just something to notice. Flavor-wise, there’s an artificial chocolate flavor that is neither as sweet nor as enjoyable as the aromas. Secondary flavors include citrus, orange peels and unseasoned grits. There’s a real contrast when I take the cigar out of my mouth after taking a cold draw because I can smell the much sweeter chocolate coming from the wrapper and can still taste remnants of the cold draw’s less sweet chocolate.

The first thing I notice upon lighting the StillWell Star LE Holiday Y2022 is that it smells like lit pipe tobacco. Flavor-wise, I pick up lots of woody flavors like cedar and hickory, there’s also a lot of toastiness and some faint hints of what I imagine the pipe tobacco tastes like. That said, it’s a rather pedestrian start—particularly compared to the aromas—and somewhat burning. I also notice pretty early on that the smoke production from this cigar seems far greater than average, albeit not the greatest amount of smoke I’ve ever seen. The cigar settles on a profile of layers of burning woods that lead earthiness, a cannabis-like lemon flavor, and some deep, sharp and sweet flavors that hit the palate differently than the others. There’s also a standing roughness to all of the flavors. The finish has lots of leather over hickory, a metallic-influenced marshmallow flavor, and oatmeal. At times, I can taste other flavors in limited or milder capacities: raspberry is present for a handful of puffs, some of the chocolate sweetness emerges if I go looking for it, and one cigar has a very subtle yellow mustard flavor. Unfortunately, roughness is still present. It’s not as strong as the other flavors, but it just doesn’t disappear like they do. Retrohales have a more defined earthy profile with a rotating cast of secondary flavors that include black pepper, white pepper, green pepper, saltiness and leather. The finish sees the greatest amount of the sweet chocolate flavors, but it’s still minor compared to the other flavors which include grains, corn, sweet creaminess, the aforementioned harshness and a weird sharpness that I cannot place. Flavor is full, body is full and strength is medium-plus. There’s no need for me to make any deductions due to construction, though the ash formation could be both firmer and more aesthetically pleasing.

While it’s not the strongest, there’s a rough grain-like flavor that sits on my tongue and seems unwilling to budge both spatially—where I think I am tasting it—and intensity-wise. I wonder if that’s drawing out some of the weaker notes and even modifying the stronger flavors. Speaking of the main flavors, cedar and macadamia nuts are the two standouts, sometimes clearly separated and sometimes more intertwined. While the grain flavors have roughness, I find both of those flavors to be quite smooth. Secondary flavors include black pepper, sweet chocolate and a sugar sweetness, though it’s tougher to find secondary flavors than before. The finish is earthy with lots of the grain flavors, albeit with less of the harshness as the main flavors. There’s an interesting contrast between those flavors—which are generally drier—and then some sweet creaminess and mild spice mixture. The flavors have very different textures and some of them—the sweetness for example—are more geographically limited to where in my mouth I can taste them. At the halfway mark, I find the cigar is tasting toastier and I’m also noticing some mild pepper on my lips. Retrohales of the StillWell Star LE Holiday Y2022 have a sharp white pepper, earthiness and some sweet cinnamon candy-like flavors. There’s a reduced amount of the aforementioned grainy flavor, which seems to allow the chocolate aspects of the pipe tobacco to shine through. I also find a well-defined butter-like creaminess. The finish has some pistachios, harsh vegetal flavors, green licorice, sweet creaminess and lots of flavor. Flavor is full—and a lot less aggressive than the first third—body is full and strength is medium-plus. One cigar is struggling with the burn and I’m forced to make two touch-ups during the second third. Earthiness and leather take over the top spots from the cedar and macadamia nuts, and it’s a pretty abrupt transition. The other major change is that the grainy flavor is beginning to phase itself out. White pepper and some creaminess are also present, but neither are particularly vibrant. Dry hay and orange peel can be found, though neither is all that strong or obvious. The finish shows off what the cigar can do without the harsh grains as it’s incredibly smooth. Creaminess leads a wood melody and some hints of citrus. Pistachio remains in the retrohale, but it’s more intertwined with the other flavors than it was in the second third. Woodiness and a butterscotch sweetness are the stand-out pair of those “other flavors.” I find the finish of the retrohale to be more entertaining as there’s a generic woody flavor over some herbal touches. But the long list of secondary flavors includes sharp leather, both white and black pepper, and some citrus that reminds me of the aftertaste of drinking a glass of orange juice. Flavor is full, body is still full though slightly reduced from earlier and strength finishes medium-full. Construction finishes great on all three cigars with no need for touch-ups. I have long believed that if the stigma—particularly amongst the people that are likely to read websites like this—surrounding flavored cigars was akin to that of cocktails, many more people would smoke both flavored cigars and cigars like this. I have consistently brought up cocktails as an example of an adult activity where sweeter and foreign flavors are introduced to create a product that not only can broaden the potential customer base, but also dramatically alters the base product itself. Cigars like this should be more popular, but too many people are both unwilling to try them and unwilling to say nice things about both the cigars and the choices people make to smoke them. Much like my first few experiences of making cocktails, my experiences with pipe tobacco are so limited that it’s tough for me to really say whether this is a good example of the hybrid product category, but I certainly would smoke the StillWell Star LE Holiday Y2022 again. I was not fond of the harsh grainy flavors throughout the first half of the cigar, but I found most of the other flavors to be rather enjoyable. My beloved Sazerac cocktail can have all the flavors of its base rye—or cognac—but the rye whiskey on its own should never taste like bitters or the remnants of absinthe. To that point, whether or not this cigar is better than a more standard-fare cigar, there’s no escaping the fact that it’s able to produce flavors that traditional cigars are not.