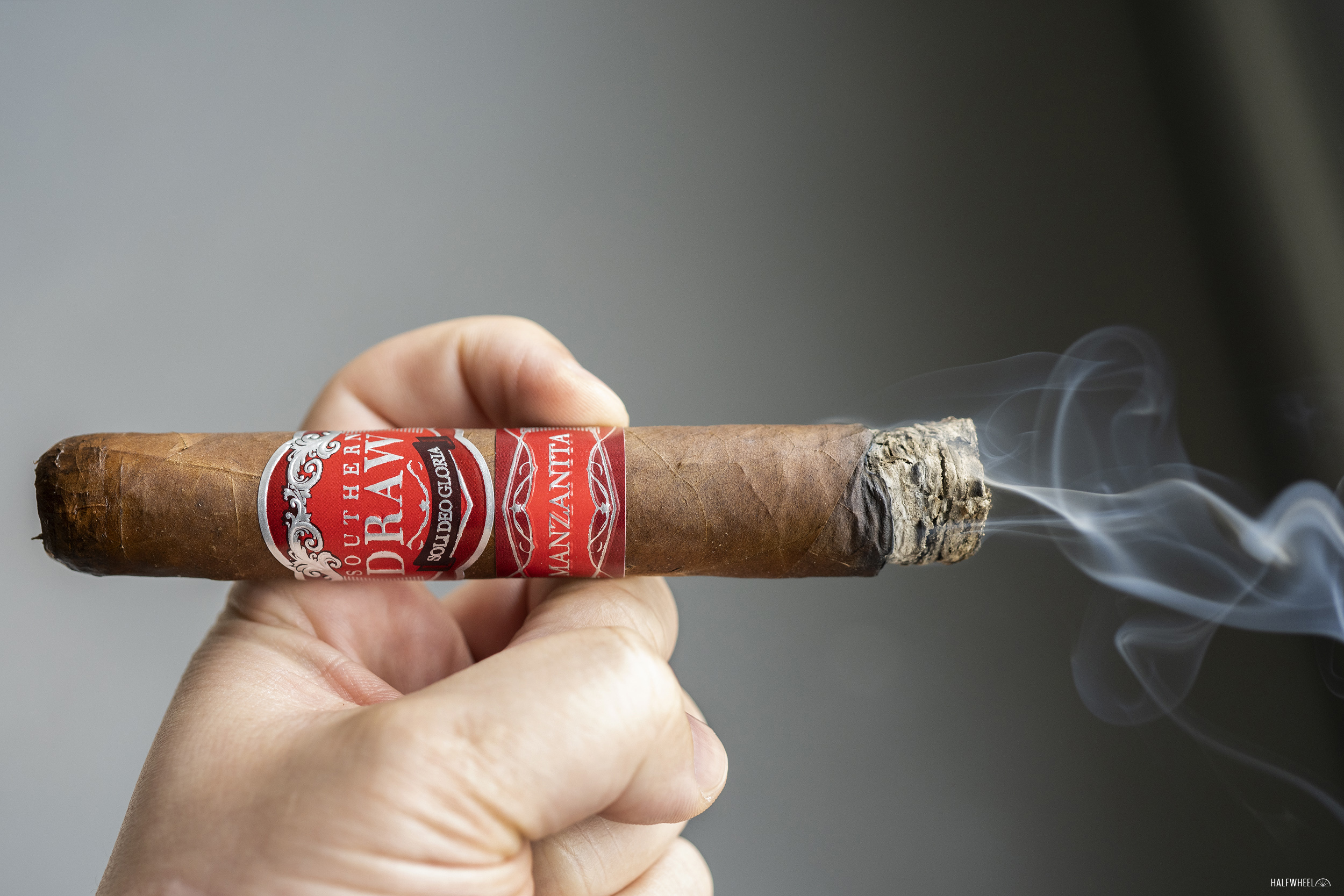 In late 2020, Southern Draw Cigars released a new line called Manzanita, which the company said was made to pay tribute to the history of tobacco.

It was a bit of a different release for Southern Draw for a number of reasons. First, for a company that I think of as usually providing a great value for consumers, the cigar has an MSRP of $14.99, which is at the top end of Southern Draw’s pricelist. Secondly, the company decided not to disclose the countries where the tobaccos came from.

That being said, it did disclose that it is being made at Tabacalera AJ Fernandez Cigars de Nicaragua S.A., and the company also disclosed the varietals of tobaccos it is using. The wrapper is a hybrid habano leaf, the binder is habano and the filler contains corojo 99, ligero and pelo de oro. Admittedly, the filler description could be somewhat confusing as “ligero” is not a seed varietal, meaning that the corojo 99 and pelo de oro tobaccos could also be “ligero” primings.

“We have long desired to share the history of traditional tobacco and its spiritual importance and then we had an epiphany while working on names for our new cigar release,” said Robert Holt, founder of Southern Draw, in a press release. “Some nostalgic names were thrown around, but, when we saw this leaf, its deep red color, observed the texture, rolled the tabaquiados and smoked them together, there was a unanimous endorsement that Manzanita, meaning ‘little apple’ in Spanish, describing the tiny, apple-like fruit, was perfect.”

While only one size was released at first, the company made it clear that there would be a robusto and gordo added in 2021. In late May, those two new sizes began shipping to stores, bringing the number of Manzanitas to three. Unlike most companies, Southern Draw is quite forthcoming about how many cigars it intends to make. For Manzanita, it’s up to 75,000 cigars per size each year, which is more than the 60,000 per year the company originally announced.

Also keeping with another part of Southern Draw’s identity, a portion of the sales of Manzanita are being donated. This time it’s going to First Nations Development Institute, an organization that works to improve economic conditions in Native American communities. Southern Draw previously said it hoped to donate $30,000 to the group’s Nourishing Native Foods & Health. 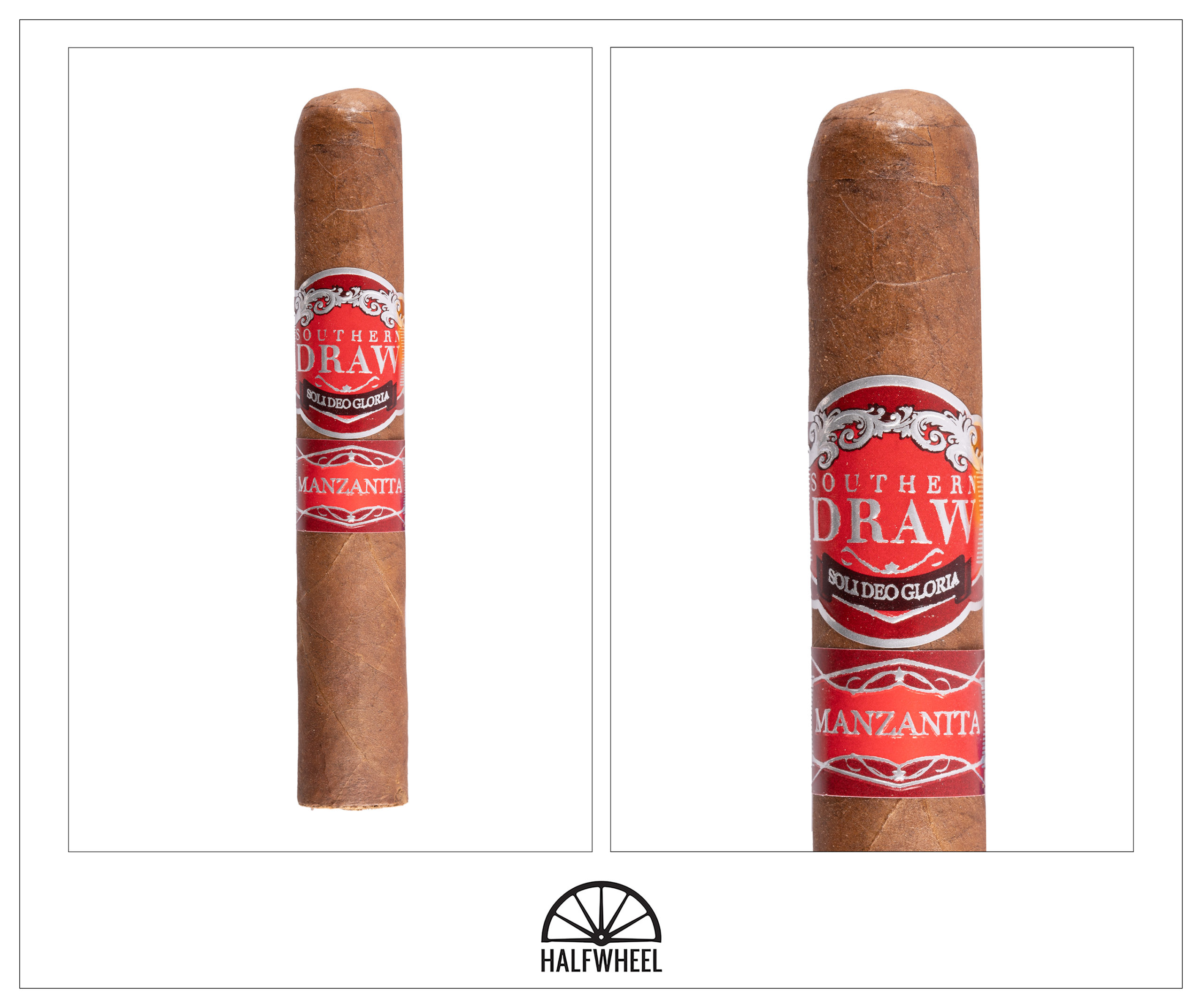 The first thing I notice about the Southern Draw Manzanita is the printing on the bands, which isn’t as clean as most cigars. Fortunately, this isn’t a blog about cigar packaging design—at least not today—so my attention turns to the dark wrapper, which has quite a bit of red hues and some obvious veins. The aroma from the wrapper is medium-full, though I don’t get much in the way of individual flavors. I pick up some barnyard, redwood flavors and something that reminds me of hand soap. The foot is sweeter thanks to a big chocolate sensation that sits on top of cedar, creaminess and woods. The cold draw has a mixture of pineapple, chocolate and leather, though the pineapple flavor seems a bit stronger than the other two.

Upon lighting—particularly the first cigar—I’m a bit surprised by how little smoke hits the palate. Flavor-wise, I find leather, peppermint and some acidity, though I need more smoke to really get a full picture. On the subsequent two cigars, I taste those flavors along with some more woody flavors. All three cigars seem to take a few puffs before the flavors really begin to coat my palate. Once the cigar has hit its stride, a clean profile emerges with earthiness leading a bitter peanut butter, fruity sweetness and some minerals. On one sample, I find the fruitiness to be close to an artificial grapefruit. While the earthiness emerges pretty quick, the other flavors seem to find their grooves once the first inch-long clump of ash falls. Retrohales are also led by earth, though a bread flavor makes a decent charge to challenge the top spot. There’s some chocolate on two cigars, though it disappears before the end of the first third. While I found the main profile to be very clean, there’s a noticeable uptick in grittiness as the retrohales finish. It’s still led by earth, though a not-so-sweet creaminess is now the secondary flavor. Flavor is nearly full, body is full and strength is inconsistent. Some puffs I can feel the nicotine, but most of them I can’t. What’s quite clear is that the percentage of puffs where I can feel the strength is increasing as the cigar as the cigar burns, though I’d still peg the first third around medium-plus. All three cigars require me to use the lighter almost immediately after lighting—something I don’t dock the cigar points for—and two of the cigars have slightly tight draws, though construction is otherwise impressive.

By the midpoint of each cigar, the flavor is remarkably consistent, though the strength levels are all over the place. The first sample is solidly medium-full, continuing the aforementioned trend of having some puffs with noticeable nicotine and others without it. The second sample is more medium and I don’t really have concerns about the cigar getting too strong. On the third sample, I’m concerned because the strength is pretty much full and I know what’s coming next. Flavor-wise, earthiness remains the main flavor, though it’s now joined by a metallic flavor. Fortunately, it’s not a harsh metallic flavor and actually does well to accent the earthiness. If I could draft flavor notes, metallic wouldn’t be a first-round selection, but it helps to provide a new dimension to the earthiness and never lead to a burnt harshness, so I’m content with how it works here. At times, there’s more of that not-so-sweet creaminess, which also works to add new dimensions to what is otherwise a lot of earthiness. The finish has an uptick in mineral-like flavors and something that reminds me of subtle potato notes I find in some vodka. At times, there’s some creaminess and lemon, though neither are consistent. Retrohaling continues to show earthiness, though it’s a bit tastier thanks to some roasted flavors and something that reminds me of a mark. The finish of the retrohale has more of the mineral and metallic flavors and a faint hint of pepper. Flavor is nearly full and body is full. One cigar needs a touch-up to help with smoke output, though the burn line and ash formation are excellent. If you are hoping to find out that the Southern Draw Manzanita Robusto has a different main flavor, you are going to be disappointed. While it’s changed a bit, earthiness is still the clear frontrunner of the profile. There’s more toastiness—different than the second third’s retrohale—minerals, creaminess and something that reminds me of sunflower seeds. The finish is creamier, though still mostly a mixture of earthiness and minerals. Retrohaling produces earthiness over barnyard and an increased amount of black pepper, though it’s still quite mild. The finish has earthiness and minerals over some sour creaminess. Flavor is still right on the edge of being full, body is medium-full and the strength is at varying levels of full. The first cigar is providing enough nicotine that I know I will immediately be consuming some candy afterward to help counteract my lightheadedness, the second cigar gets smoked down to about an inch left and I can just feel my head getting light, the third cigar—which had been stronger in the second third—is somewhere in the middle. Each cigar needs a touch-up to help with smoke production, which isn’t surprising given the strength of the cigar. 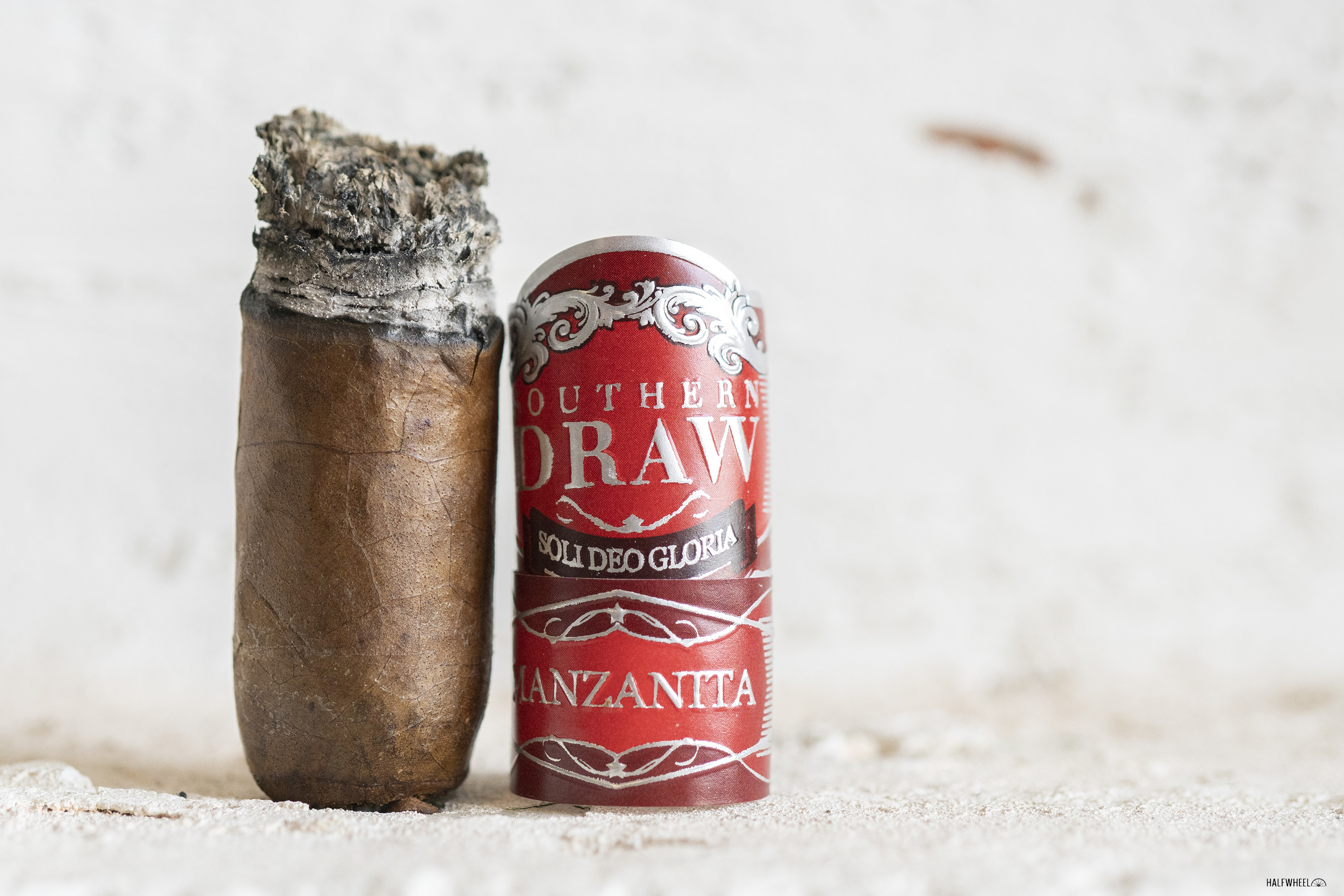 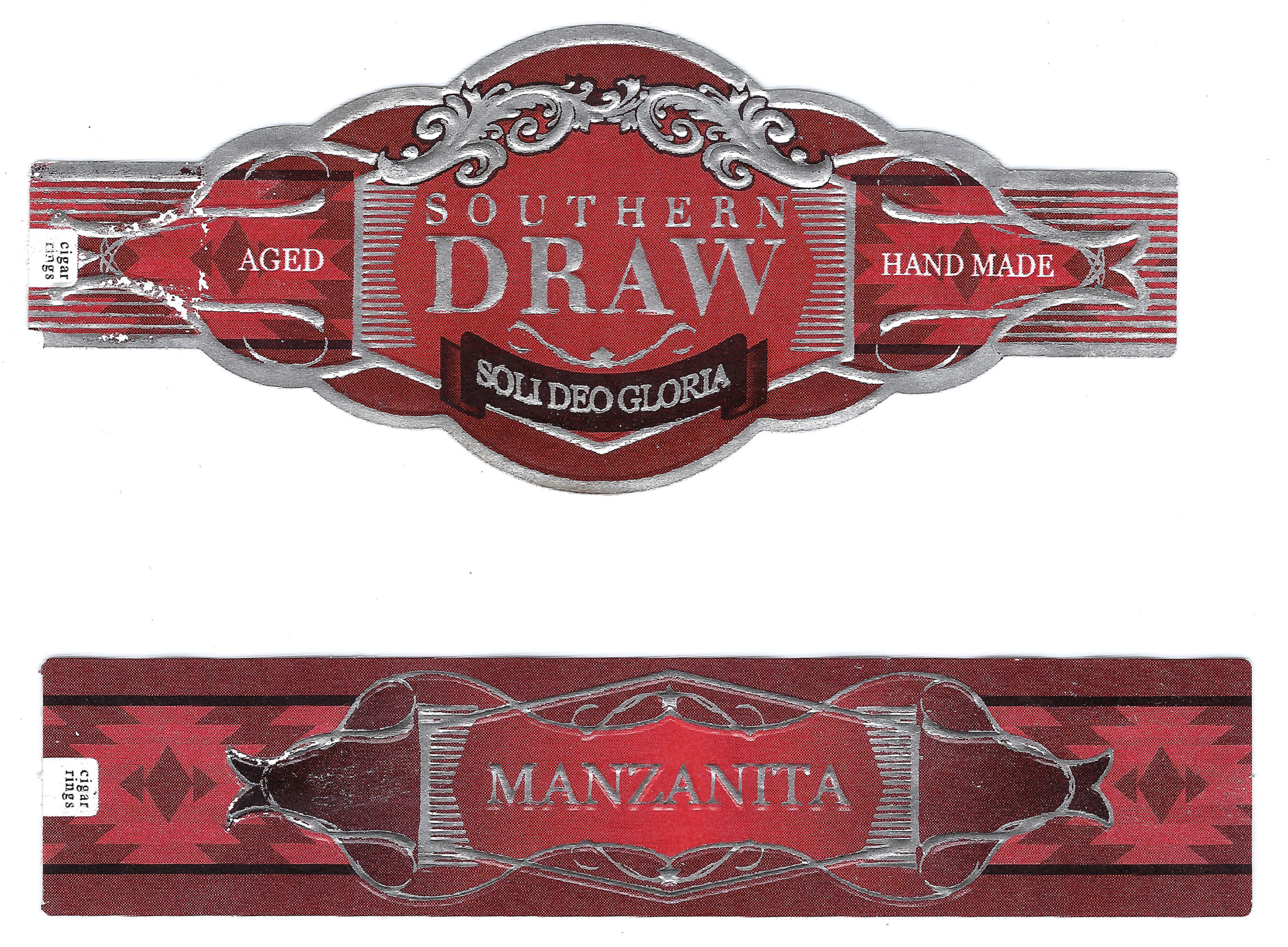 The most common question to determine if a cigar is worth its price is does the cigar’s flavor and/or length of smoking time justify the price? We don’t factor price into our scores and we also don’t factor nicotine strength into any of our scoring metrics. But for me the question with the Southern Draw Manzanita is does this cigar’s flavor justify its strength? The answer is no. While neither linear nor one note, this cigar provides an earth-dominated profile that doesn’t stand out from so many other earth-heavy cigars except for the fact that midway through two samples I was questioning whether I was going to need to lie down after finishing the cigar. If you want a nicotine bomb, this is a great option. But Southern Draw makes plenty of cigars that are not only more approachable but far better flavor-wise.