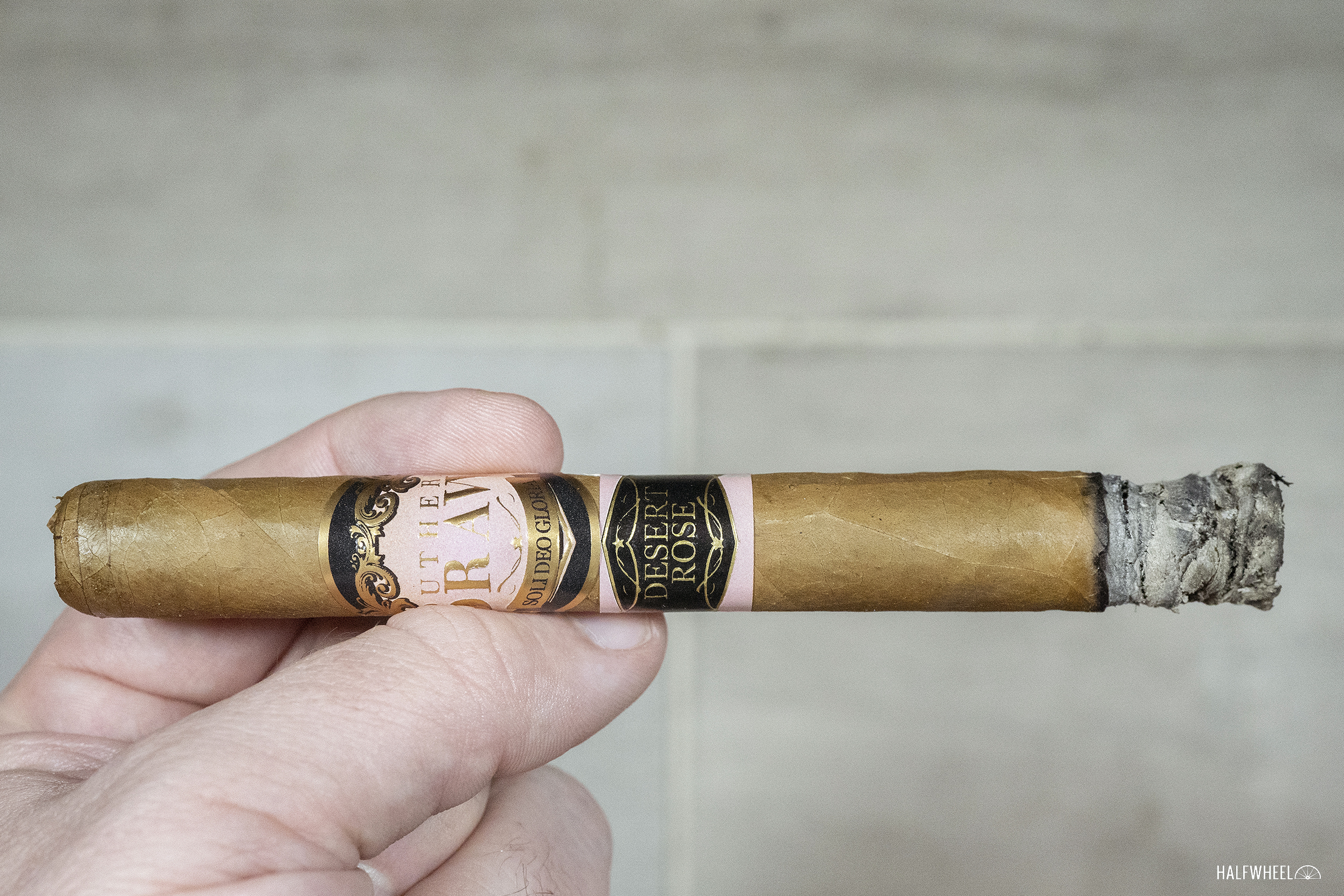 One of the things I have become increasingly intrigued by about Southern Draw Cigars is the ongoing evolution of their cigars, and how they will take one existing cigar and modify something about it for another release. This has been something the company has been doing for a few years now, and their most recent announcement about its IGNITE 2022 releases featured a pair of cigars that were evolutions of other cigars.

The company also used the evolutionary process to get to this cigar, the Southern Draw Rose of Sharon Desert Rose Lonsdale.

The original Rose of Sharon line debuted in the summer of 2016, and like the majority of the company’s portfolio, got its name from a flowering plant, though it was also a nod to company co-founder Sharon Holt.

That blend used an Ecuadorian Connecticut wrapper, Nicaraguan binder and fillers from Nicaragua and the Dominican Republic. It has been released in seven sizes, ranging from a lancero to a gordo and including a pair of thick perfectos.

In 2019, the line would get a line extension with a modified blend, the Desert Rose, also a type of flowering plant.

The Desert Rose blend made its debut at the 2019 IPCPR Convention & Trade Show, and the fact that the show was held in Las Vegas helped make for a fitting tie-in to the cigar’s name. The company modified the blend by using what it described as a heartier wrapper leaf, while the binder is a habano leaf that comes from Nicaragua’s Condega region and the filler is made up of Honduran corojo 99 and Dominican piloto cubano.

When it was released, the cigar was called “a symbol of the family as we stand our ground and confront the changing seasons and mounting challenges that we continue to encounter as we execute our mission of unity, charity and the service via this little brand,” by Sharon Holt.

The Southern Draw Rose of Sharon Desert Rose debuted in a 5 1/2 x 52 box-pressed torpedo, and while it would be an ongoing and fairly regular production line.

Just about a year later, the Rose of Sharon Desert Rose would get two new sizes, the first a limited edition 6 x 52 for Famous Smoke Shop in Pennsylvania as an exclusive size for that retailer, while the other would be a 6 x 44 lonsdale that would be available to all of its accounts.

Here’s what I said about the Southern Draw Rose of Sharon Desert Rose Lonsdale when I reviewed it in November 2020:

The Southern Draw Rose of Sharon Desert Rose Lonsdale is a very impressive cigar: smooth, balanced, and with a blend that has the ability to hit a pretty impressive level of complexity in both flavor and aroma. It’s hard to find a lot of fault with the cigar, and after three of them about the only thing I could point to is the Honduran filler being a bit out of balance in one sample. It may not be the most complex or flavorful cigar that I have ever smoked, but what it does offer is very enjoyable from the first puff to the last, capped off by very impressive construction and combustion. Between its profile and performance, it is a cigar for seemingly any part of the day and nearly every palate, and one that is easy to recommend. 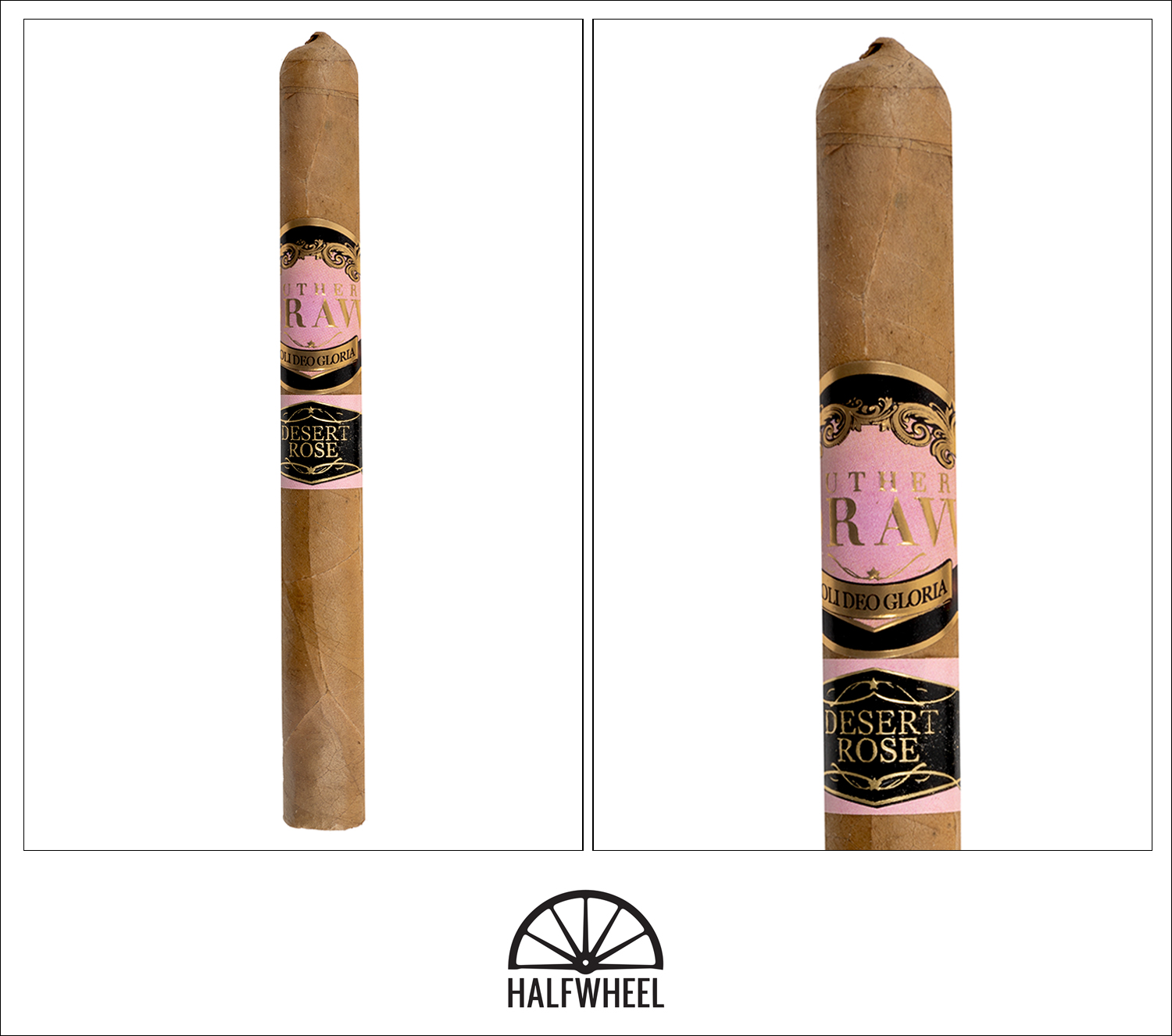 Every time I’ve glanced at the Southern Draw Rose of Sharon Desert Rose Lonsdale in my redux humidor, I’ve found myself admiring how smooth the wrapper appeared to be, as well as its almost golden brown hue. Now that the time has come to smoke the cigar for a redux review, I can finally take it out of the cellophane and give it a closer look, and it certainly lives up to expectations. The wrapper leaf is quite smooth, largely due to the veins being quite small. There are some visible veins, but these are some of the smallest I can recall seeing recently. I’m careful not to squeeze or handle the cigar too much, but a gentle squeeze reveals a firm core with some a bit of give. The foot has a very subtle and light aroma that has me thinking of the inside of a dinner roll. The cold draw is a bit firmer than I would like, while the flavor is about as mellow as the aroma, though I get a thick vanilla custard here with just a hint of barn wood in the background.

For offering very mellow pre-light flavors and aromas, the Southern Draw Rose of Sharon Desert Rose Lonsdale starts off with a fairly strong profile that seems to be rooted in a heavy ligero flavor. A few more puffs in and the profile expands and the layering of flavors is immediately noticeable, with the ligero pepper at the base, a bit of earth, then dry wood and finally white pepper. It’s a very impressive flavor profile that is seemingly reflecting some flavorful tobacco that has been resting for two years or so now. Retrohales in the first third have some pepper but are fairly mellow and restrained. As the first third comes to a close, the flavor begins to intensify, led by the ligero-like black pepper that is becoming increasingly potent on my tongue, and establishing a lengthier finish than what was offered earlier. As things evolve, the pepper lightens up for a bit which allows me to pick up a bit of a dry pretzel flavor ahead of the midway point. Construction and combustion have both been flawless thus far. Flavor swings between medium and full, body is medium-plus, and strength is shy of medium.

The second half starts off with a reintroduction of the thick black pepper sensation that has more or less been a constant in the profile. There’s a bit of a doughy undertone beginning to build, giving the cigar a new base note. Much like they did earlier, the flavors are taking a layered approach, and I can almost feel them hitting my tongue in steady succession. The pepper and earth are the first and most prominent aspects, followed by a second wave of lighter and drier earth, and then some lumber and a finishing sprinkle of white pepper. The final inches bring the previously layered flavors together into a tighter, denser expression, with the ligero pepper sensation still driving each puff. The cigar finishes up medium-full in flavor intensity, medium-full in body, while strength sits closer to medium. Construction is still very good, though the wrapper hits a spot where it doesn’t want to burn, which necessitates a quick touch-up. Smoking time was one hour and 40 minutes.

There are a lot of cigars that I wish I could smoke at four- to six-month intervals to see how they evolve with time, and after waiting two years to smoke the Southern Draw Rose of Sharon Desert Rose Lonsdale, I'm inclined to want to add this cigar to that list. While the flavor is still very vibrant, it feels like it is starting to show some signs of its age. They also feel like they have coalesced in the humidor, coming together much like the components of a long-simmered stew would. While it still didn't pack as much of a punch as I thought it might, there is still a pretty heavy ligero pepper that steers much of the cigar's journey, but it also takes enough breaks to let other flavors shine direct things for a bit. Two years later, I'm still impressed by the cigar, and if anything more intrigued by it as I wish I had been able to document more steps on its journey.