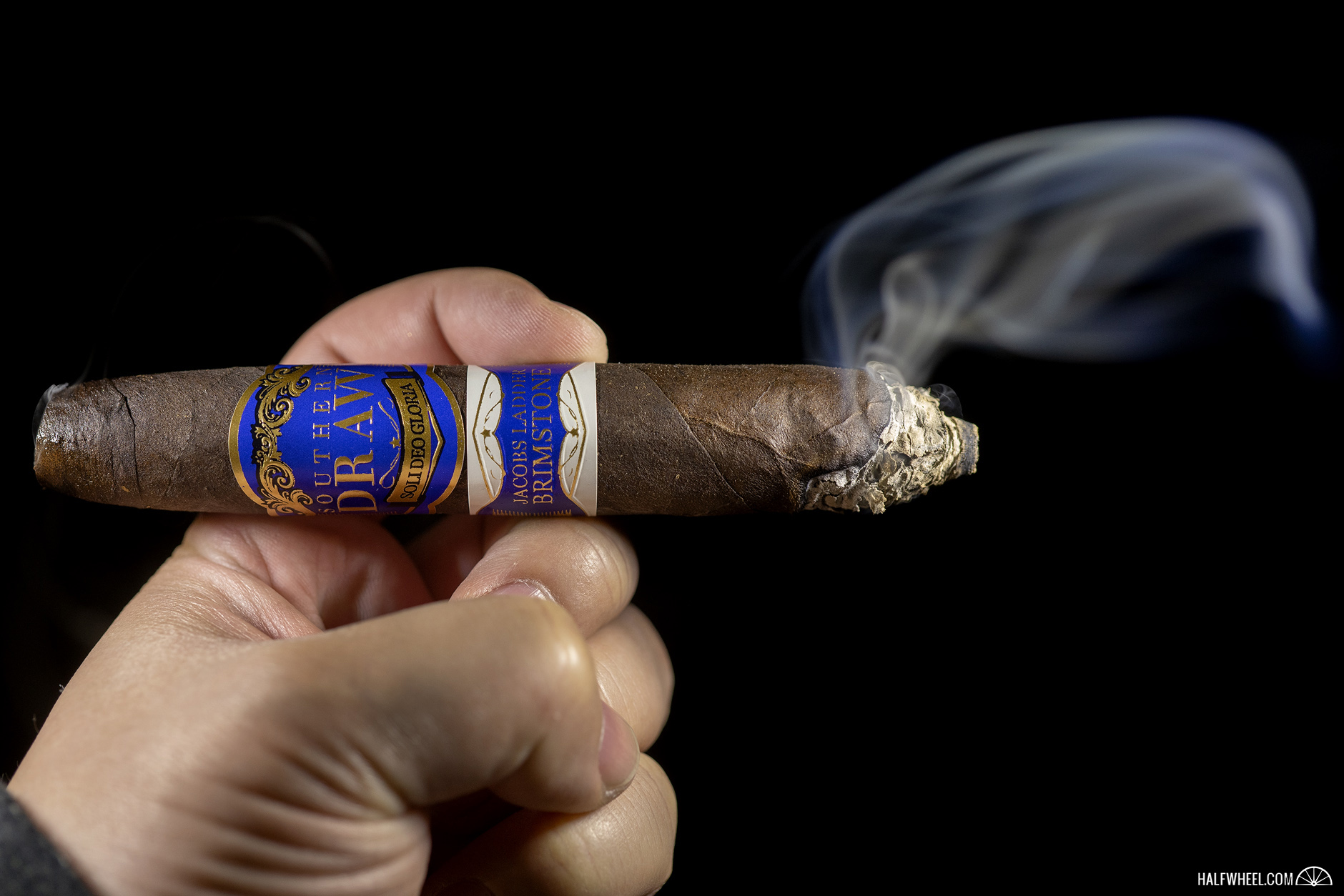 As we chronicled quite a bit last year, Southern Draw Cigars has grown immensely and in just about every way. While I’m not sure how many more cigars it’s producing in 2019 compared to 2018, I can say that it is more than 2018, at least if the measurement is being done by the number of SKUs and not the total number of cigars.

Over the summer, the company introduced 14 new SKUs split between six different lines. Most of the cigars were extensions to previous lines, though more offshoots than simply just new vitolas. That applies to the Jacobs Ladder Brimstone; it’s a 6 x 56 perfecto that is an extension to the original Jacobs Ladder brand, though is a different blend. 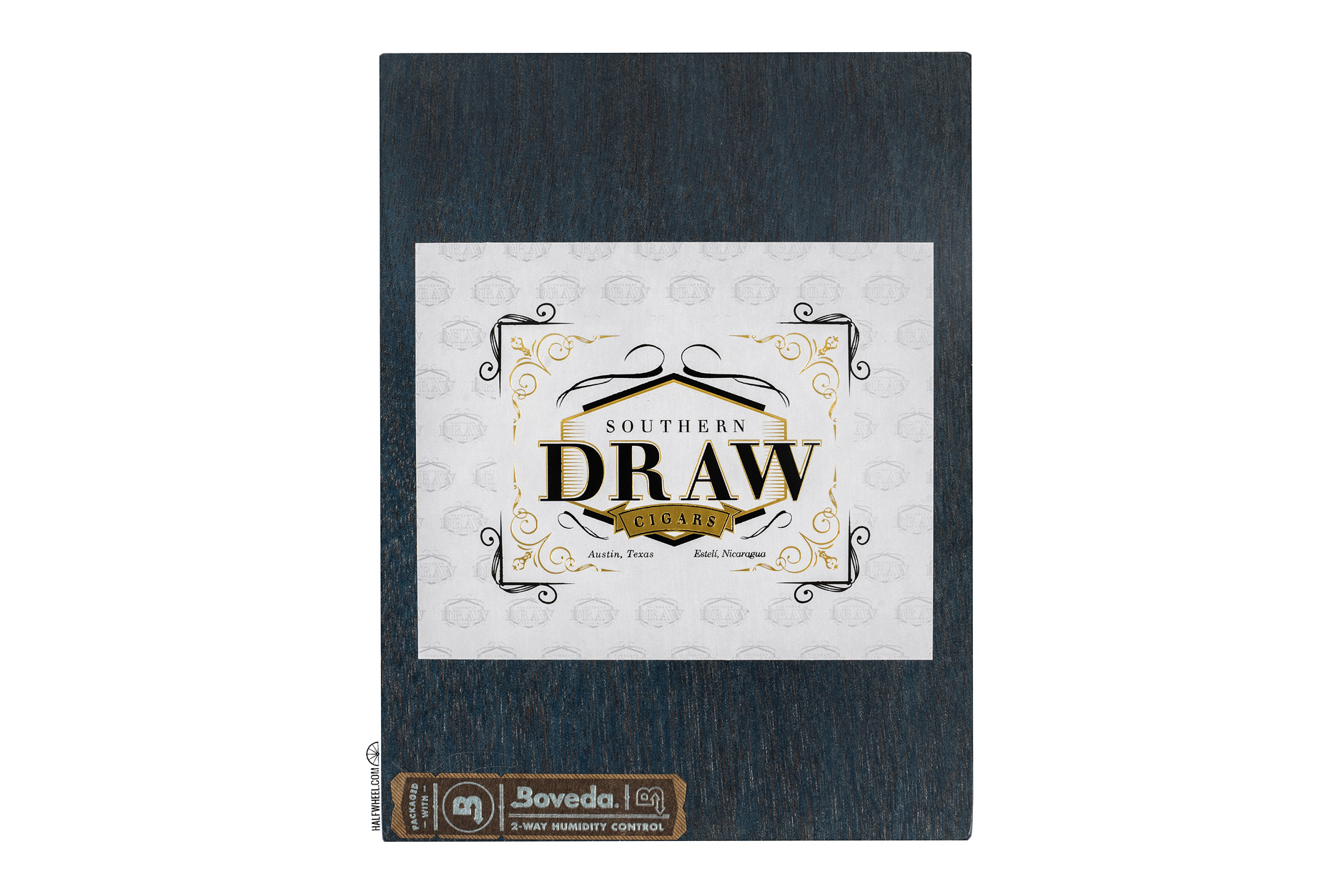 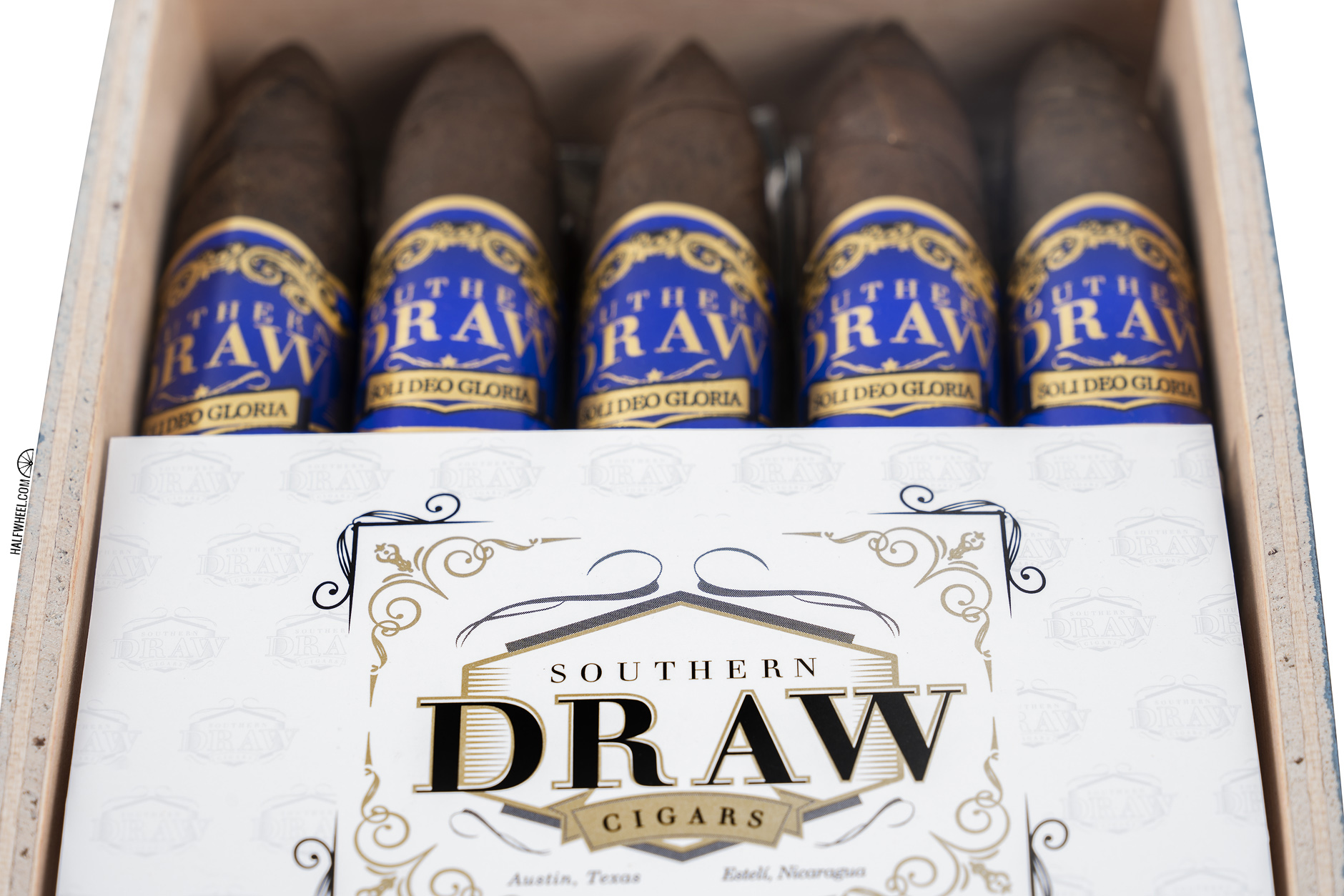 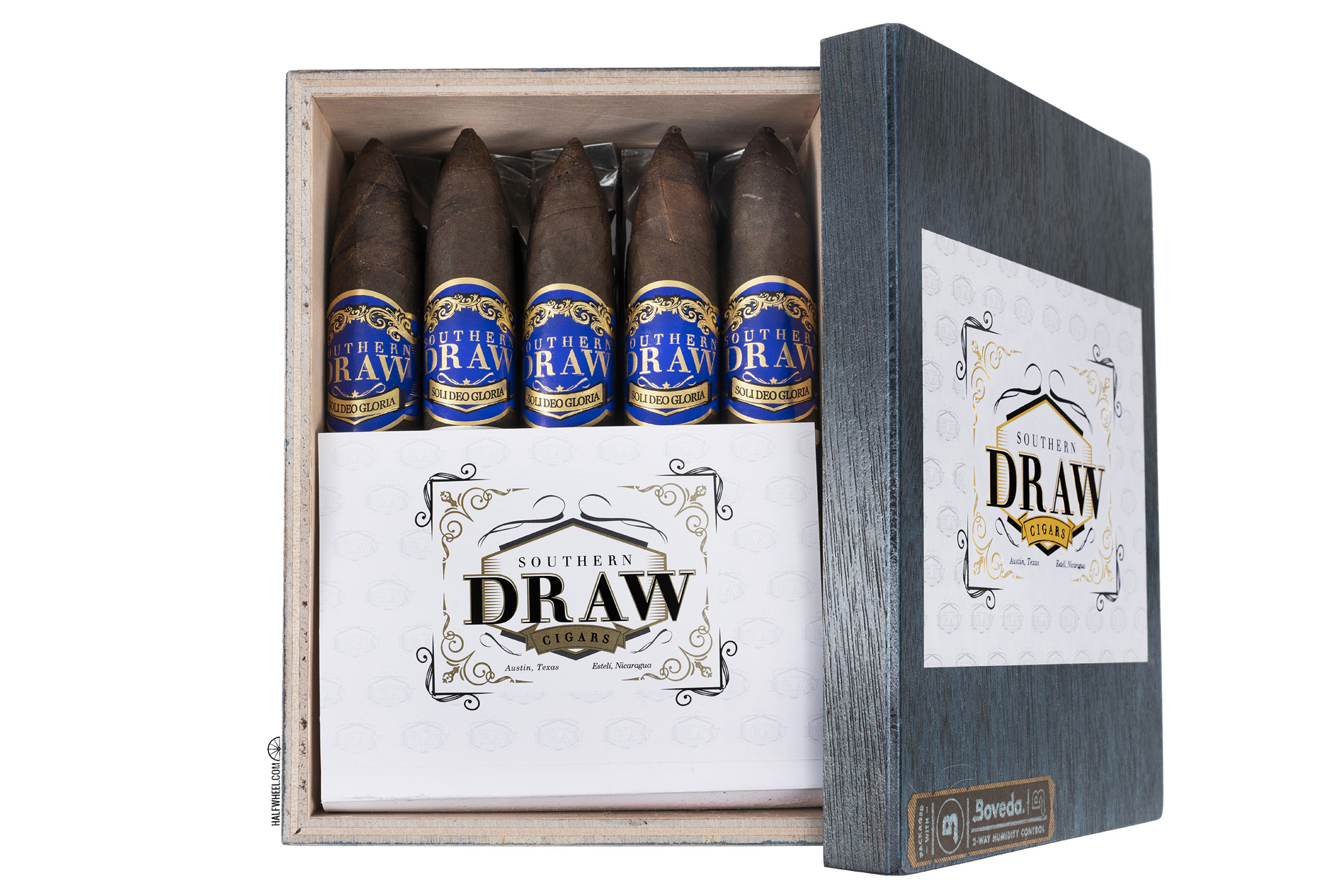 The company described the original Jacobs Ladder as “double ligero,” meaning that it used two different types of ligero. For Brimstone, it’s three types of ligero, but the full cigar is a bit more stout than that, as it uses a broadleaf wrapper, a broadleaf binder and Dominican and Nicaraguan ligeros. It’s technically a limited production cigar—150,000 cigars annually—though it’s unclear if the company is going to get anywhere close to that number in the first year. 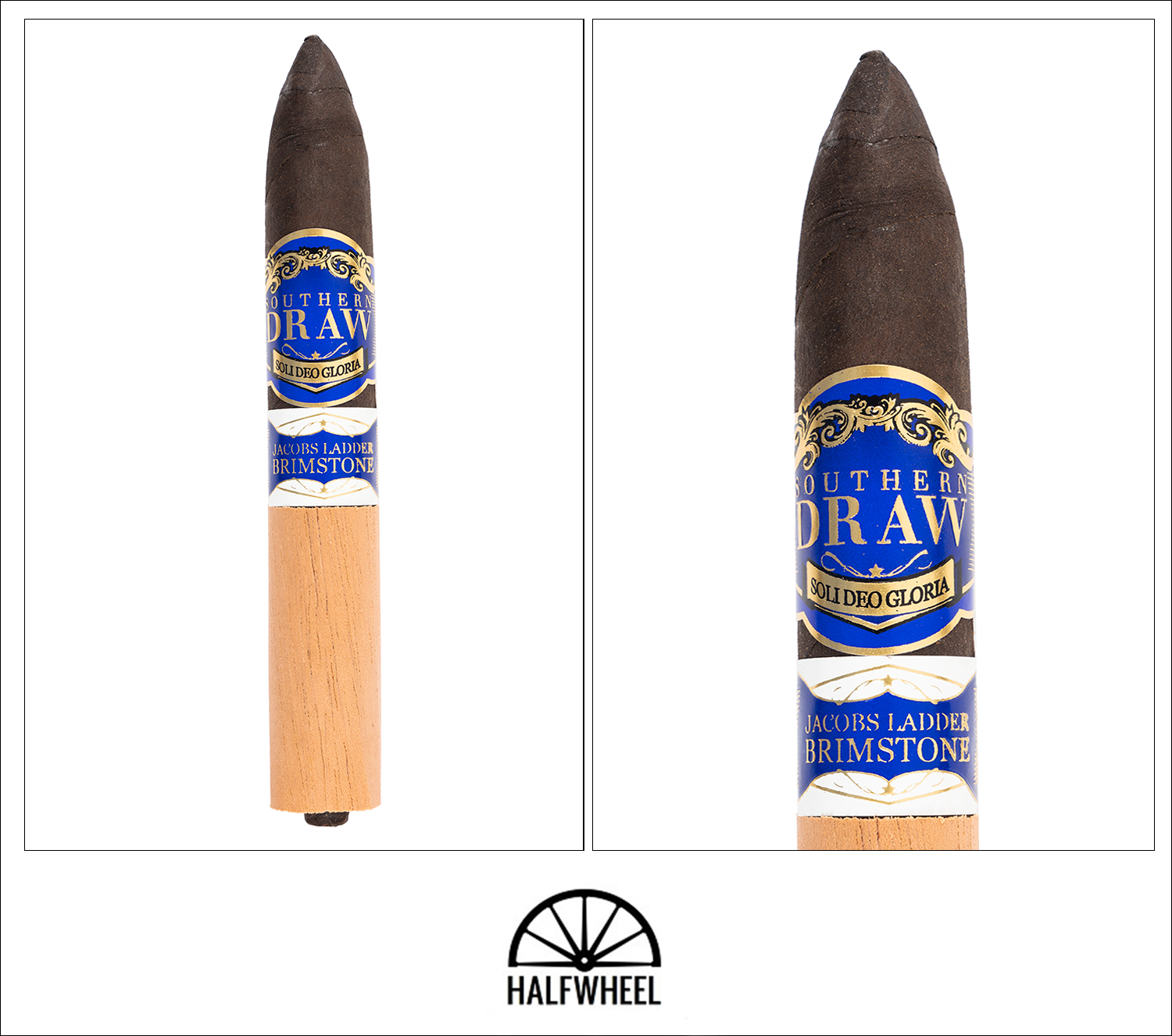 The wrapper is unsurprisingly dark, though that’s pretty challenging to tell until the cigar is removed from quite a bit of packaging. Between the cellophane, the dual bands and the tiny cedar sleeve, not much of the cigar is exposed and there’s a lot going on visually. Aroma off the wrapper has dark chocolate, some manure, leather, and at times, something that reminds me a bit of fire cured tobacco, though the entire ensemble is only about medium-plus. The foot is quite similar—which is also not surprising given how small it is—though the fire cured flavors are a bit more prevalent than the manure. Cold draws deliver a mixture of both dark and sweet chocolate, some saltiness and a bit of manure, around medium-full.

I don’t notice the cold draws being tight, but the first few puffs of the Brimstone really have me questioning my choice about whether I should have cut the foot. Flavor-wise, it’s tough to get a ton of smoke in the mouth, but what’s there has earthiness, toastiness and some saltiness. One cigar is particularly problematic, but the good news is after about 10 minutes the nipple has largely burned through and the draw opens up. Once that happens, a mixture of dark chocolate, bread, graham cracker and toastiness take over my mouth. Retrohales provide strawberry, dark chocolate, earthiness and a creamy bread flavors. The finish is super salty with salty bread, meatiness and some hints of what licking a salt block tastes like. The flavor is full, body is medium-full and strength is medium-full.

It’s rather challenging to tell when the first third flavor really transitions into the second third, but eventually I notice that the cigar has turned much toastier with woodiness, creaminess and some sweetness. Retrohales are a bit more delicate with cardamon, white pepper and acidic leather. The biggest change for the Jacobs Ladder Brimstone is that the finish is no longer dominated by saltiness, instead providing nuttiness, creaminess, white pepper and some acidity. Two samples need to get touched up in the second third, one a bit more pressing than the other, but otherwise construction is fine. Flavor is full, body is full and strength is medium-full. Similarly, it takes a bit longer than normal for the cigar to shift again, but with less than an inch and a half left I’m left with an unbelievably different cigar. It’s basically the exact opposite of what Brooks’ experienced with the Días de Gloria from A.J. Fernández. The Brimstone is now creamy with buttermilk, lemon creaminess and some generic creaminess. There’s still touches of white pepper and even some of the bread flavors from the first third, but the depth of the creaminess is an unexpected surprise. Retrohales have more creaminess, though some of the saltiness returns, now joined by a peanut note. Flavor finishes full, while body is medium-full and strength is full. 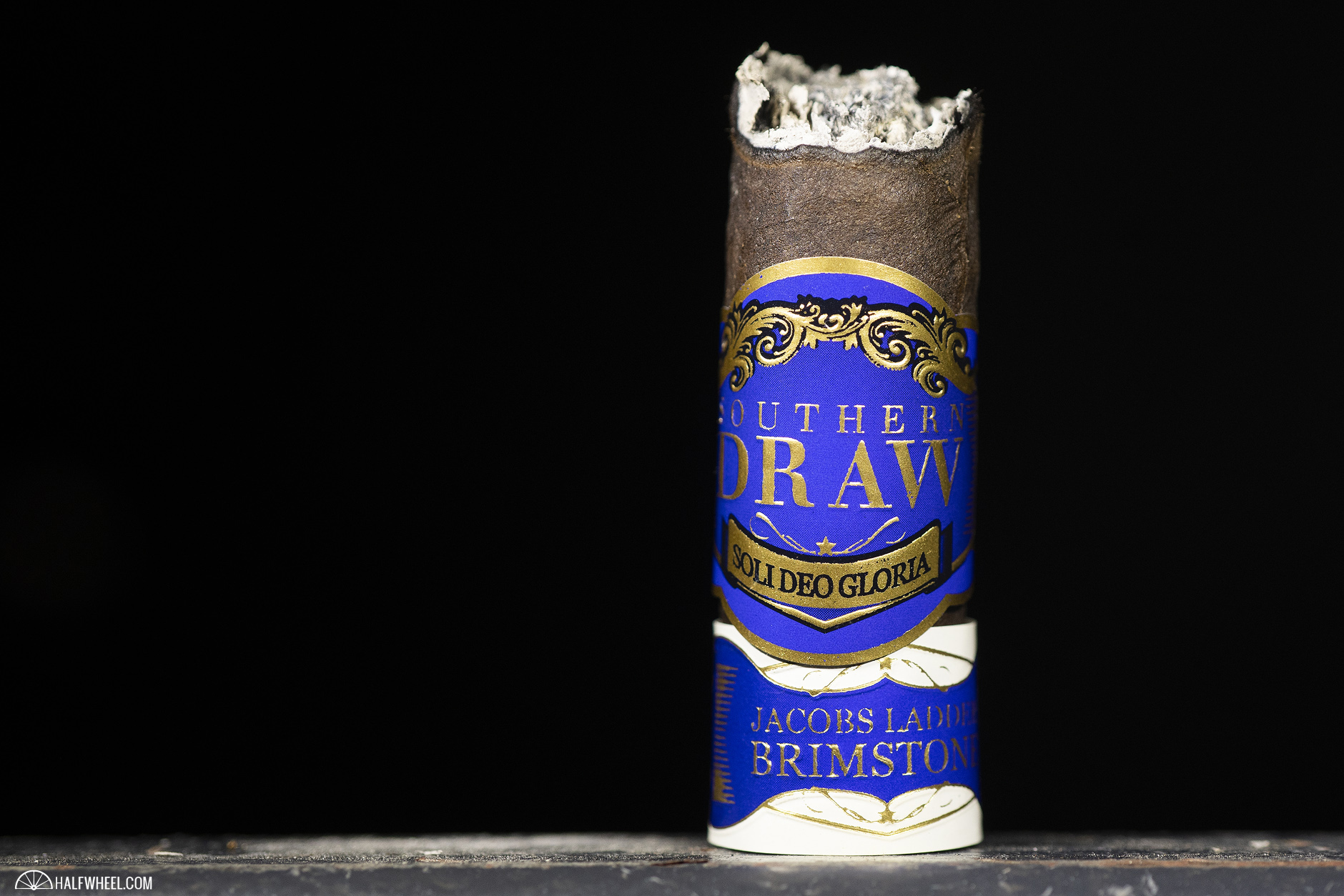 I expected power, and power I got, particularly by the end of the Jacobs Ladder Brimstone. What I didn’t expect, especially after spending an hour and a half with the cigar was a succulent creaminess to close out the cigar. The first two thirds provided a lot of the flavors I’d expect from this blend out of an A.J. Fernández factory and the strength was there, most notably during the last two inches of the cigar, but it ended up providing a much more complex cigar than I initially expected. Southern Draw introduced a lot of new cigars at once—to the point where I’m even a little confused—but if you needed to pick a starting point, Brimstone is a great option.