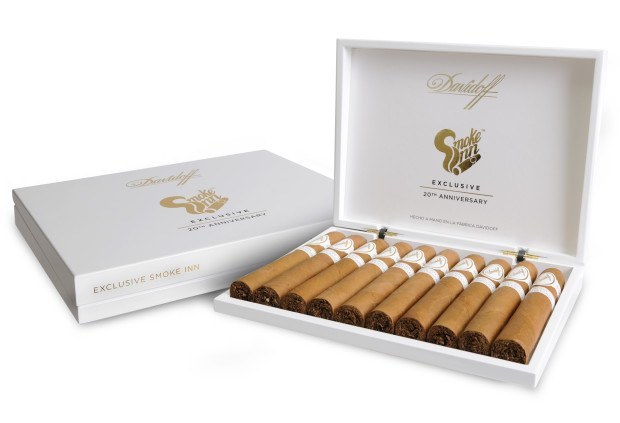 Two series are merging together for Smoke Inn’s 20th anniversary. The South Florida-based retailer has announced that Davidoff will be the 11th of the store’s exclusive Microblend Series.

The Davidoff Smoke Inn 20th Anniversary Exclusive is also part of Davidoff’s own retailer anniversary exclusive program. It allows Davidoff appointed merchants celebrating major anniversaries to create an exclusive release with the store’s branding on it.

Each year the company selects a blend to work around, this year’s was Special R, and creates five different iterations of that blend in a single size, a 6 x 52 belicoso this year. It then allows each interested retailer to smoke all five blends and choose the one they would like to have for their anniversary.

Smoke Inn’s blend has an Ecuadorian Connecticut rojiza wrapper over a Dominican binder and filler.

“Our anniversary cigar was one of the last projects we worked on with Tom Ryhiner of Davidoff before he relocated back to Switzerland,” said Abe Dababneh, Smoke Inn’s proprietor.

“Tom’s assistance was instrumental in helping us find that distinctive blend within the Davidoff profile we desired… We were amazed when all of us unanimously selected the same blend for our 20th Anniversary Cigar. We felt it was just that right unique blend that would appeal to the loyal Davidoff connoisseur and aficionados alike.”

This is the 13th cigar to be part of Smoke Inn’s Microblend Series, which started in 2010 to celebrate its 15th anniversary.

In addition to Smoke Inn, Cigars International, Davidus Cigars, Havana Phil’s, JR Cigar, Regency Cigar Emporium and Up In Smoke have announced their Davidoff Anniversary exclusive releases for the year.