To say it’s been a big year for José Blanco would be somewhat of an understatement. He started his own company, Las Cumbres Tabaco, and launched the first line – Señorial. In October as part of his 65th birthday celebrations, he announced the Señorial 65th Anniversary, which was a special size and blend that was shipped in early December. Blanco sourced the tobacco from a few different farms, and describes it all in detail which we posted in our news story from October: 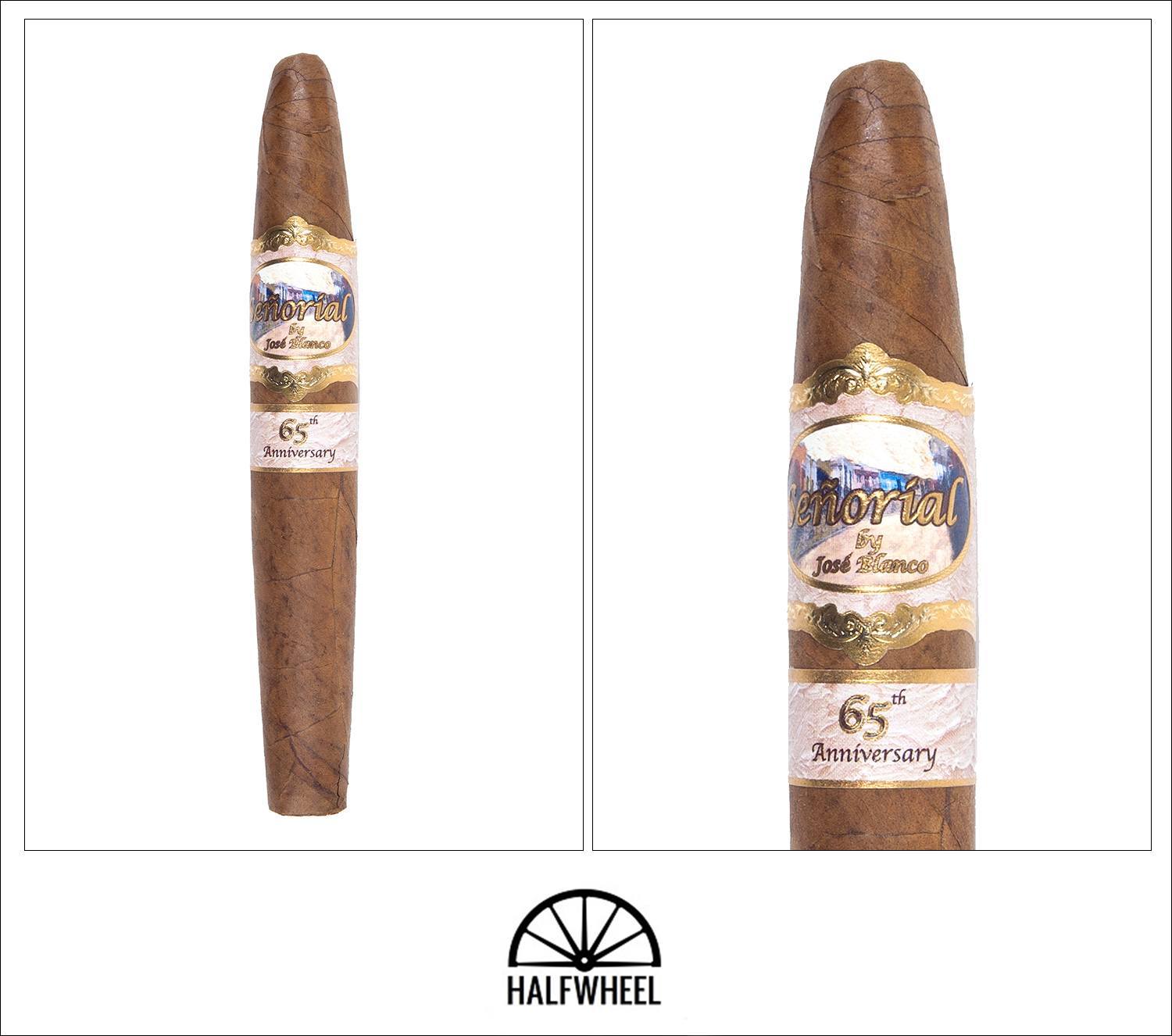 The first thing I notice about the Señorial 65th Anniversary is the neat shape and the nice looking bands. The bands have a background that is a close up of a painting, and are detailed enough that I almost expect to feel the texture on the band, though it’s just flat and not even embossed. The wrapper is a medium brown, mottled color and is a little rough feeling with a slight oily texture. There is some give to the top half of the cigar, but the bottom half seems a little squishier than I would like to see, though it doesn’t appear to be severely underfilled. The wrapper’s aroma is a strong barnyard with hints of cinnamon and pepper while the cold draw is much softer and very unique, with marshmallow, cayenne pepper, cocoa and a touch of leather.

First third starts out with a sweetness that’s balanced out by peppers, along with some cocoa, cinnamon and a touch of vanilla. About half an inch in and the peppery kick has grown, with a long, spicy finish that I feel on the back of my tongue. The burn is a little wonky starting out, burning at an even rate, though the line is a little ragged. The draw is quite nice however, sitting right in the middle of the ideal range. As much as the peppery kick had ramped up in the first half inch, within another inch it’s almost gone. The profile has smoothed out and taken on a much sweeter disposition, with burnt sugar and vanilla taking center stage giving it an almost creme brulee type note. There is still a bit of pepper and cocoa in the background though, along with some minor leather and espresso notes. 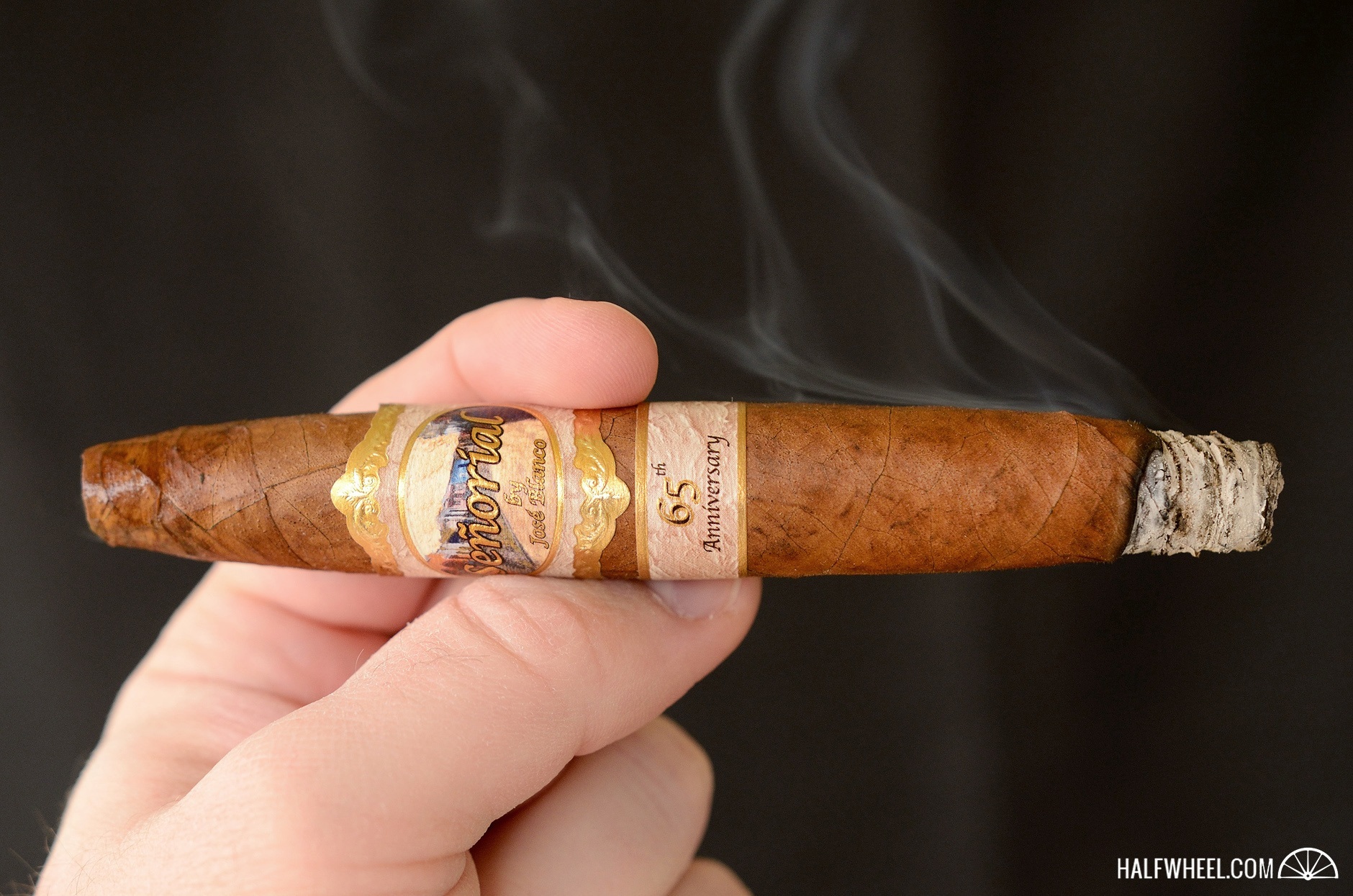 As the cigar moves into the second third it loses a bit of sweetness, though the spicy kick is still in the background. The burnt sugar is gone, though the vanilla, cocoa and espresso are still present. Unfortunately the burn has become significantly worse, requiring multiple touch-ups. The ash is holding to around three quarters of an inch, though it’s quite flakey and is sprinkling ash pieces all over the place. The good news is that the profile doesn’t see much change throughout this section despite the burn issues, and continues with enjoyable vanilla, cocoa, espresso and peppers. The final third sees more of the same – which is both good news and bad news. The good news is that the profile is still enjoyable, with a resurgence of peppers, combined with the aforementioned vanilla, cocoa, espresso and leather. The bad news is the burn continues to be an issue with huge sections lagging behind and finally at one point needing relit. Despite the burn frustrations, I’m still able to smoke the cigar down to the last inch without it getting harsh or burning overly hot. The first thing I’m sure you’re wondering is how this compares to the regular production Señorial line - and despite the burn issues I enjoyed the Señorial 65th Anniversary more. The cigar has a very solid profile with some great flavors that mesh together well, and an interesting journey back and forth between spicy and sweet. The burn issues were more than frustrating, but even with them I would revisit this cigar if I came across it in a brick and mortar, and I can easily suggest you do as well. With only 2,000 boxes released and the limitations of only putting it in brick and mortar stores it might be a little harder to track down, but it would be worth it so you can try it out yourself.