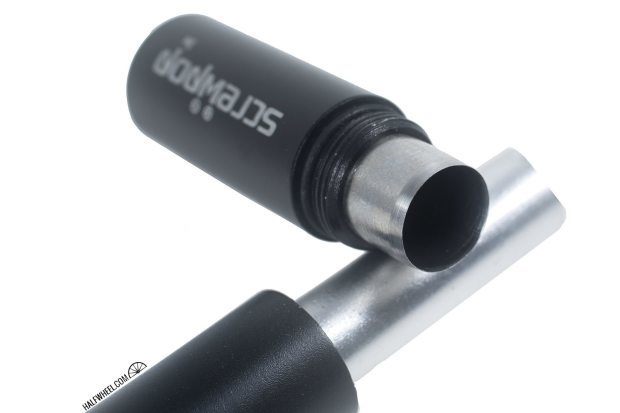 After releasing the inaugural version of its Cigar Punch in 2013, Screwpop Tools announced a new version named Screwpop Cigar Punch 2.0 in May of this year. The new incarnation is has quite a few improvements, comes packaged in a branded box and is also priced at $14.95 compared to $9.95. The Screwpop Cigar Punch 2.0 is made of two different types of metal: the actual body of the punch is made with aluminum, while the insert, grating and rivets are composed of stainless steel. According to the manufacturer, the physical dimensions are 1/2 inch x 1 inch x 3 1/8 inch. At three-quarters of an ounce, it is quite light in the hand, but still substantial enough to not feel like it should weigh more. 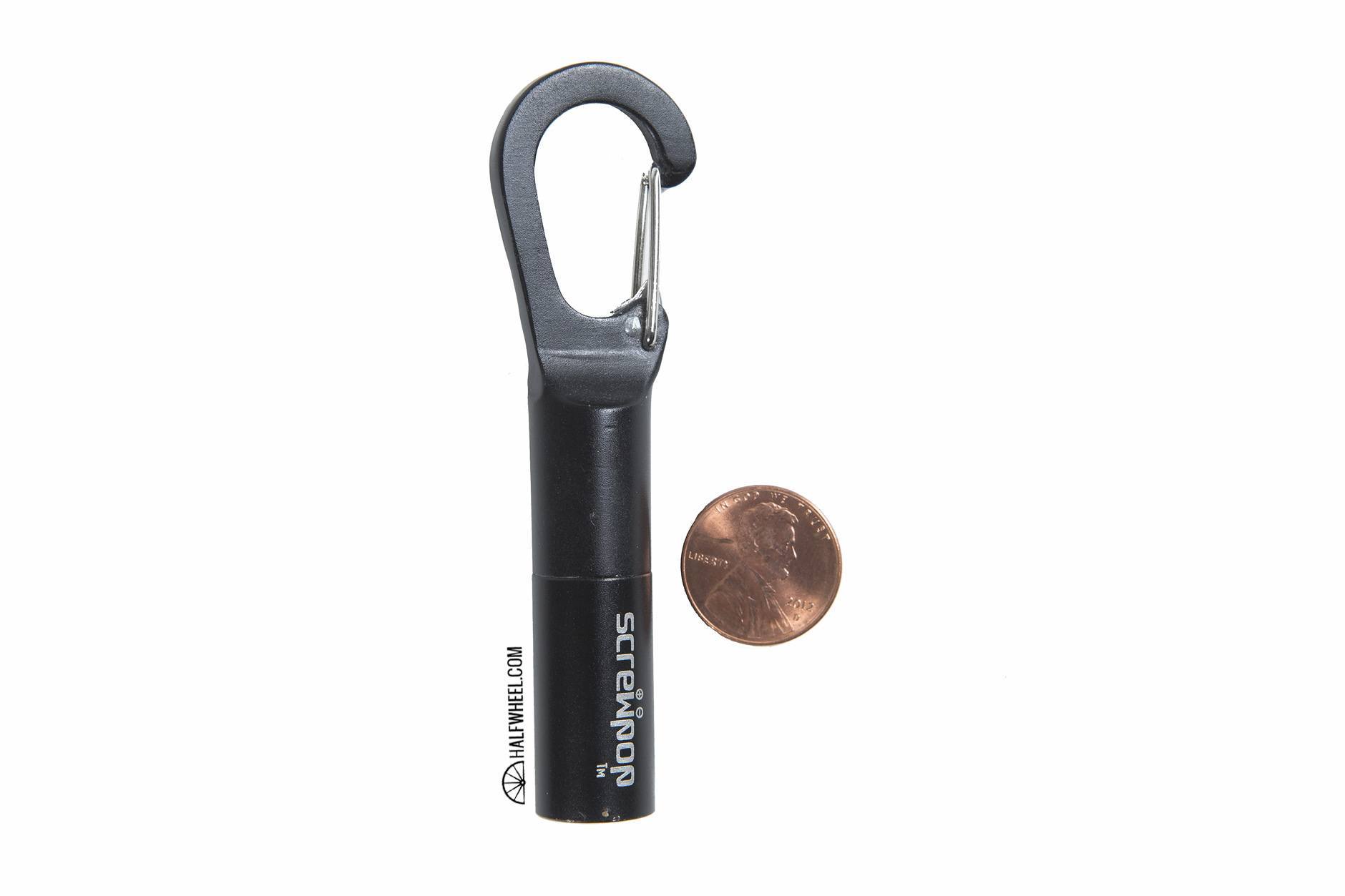 Compared to the first ScrewPop, the second version has undergone a major transformation. The most drastic difference between the two versions is the color, as the new version is currently offered in black compared to the metal finish of the original. Functionally, the punch is now on the end you unscrew, and not left on the larger key ring section. This allows the punch to be hollow, and solves one of the major problems with the first incarnation when leavings from the caps that were punched would get stuck inside, making it very difficult to clean out. In addition, the Screwpop 2.0 is noticeably—albeit not dramatically—taller than its brother, and also has a slightly larger opening that works as both the way it attaches to a key ring and as a bottle opener. 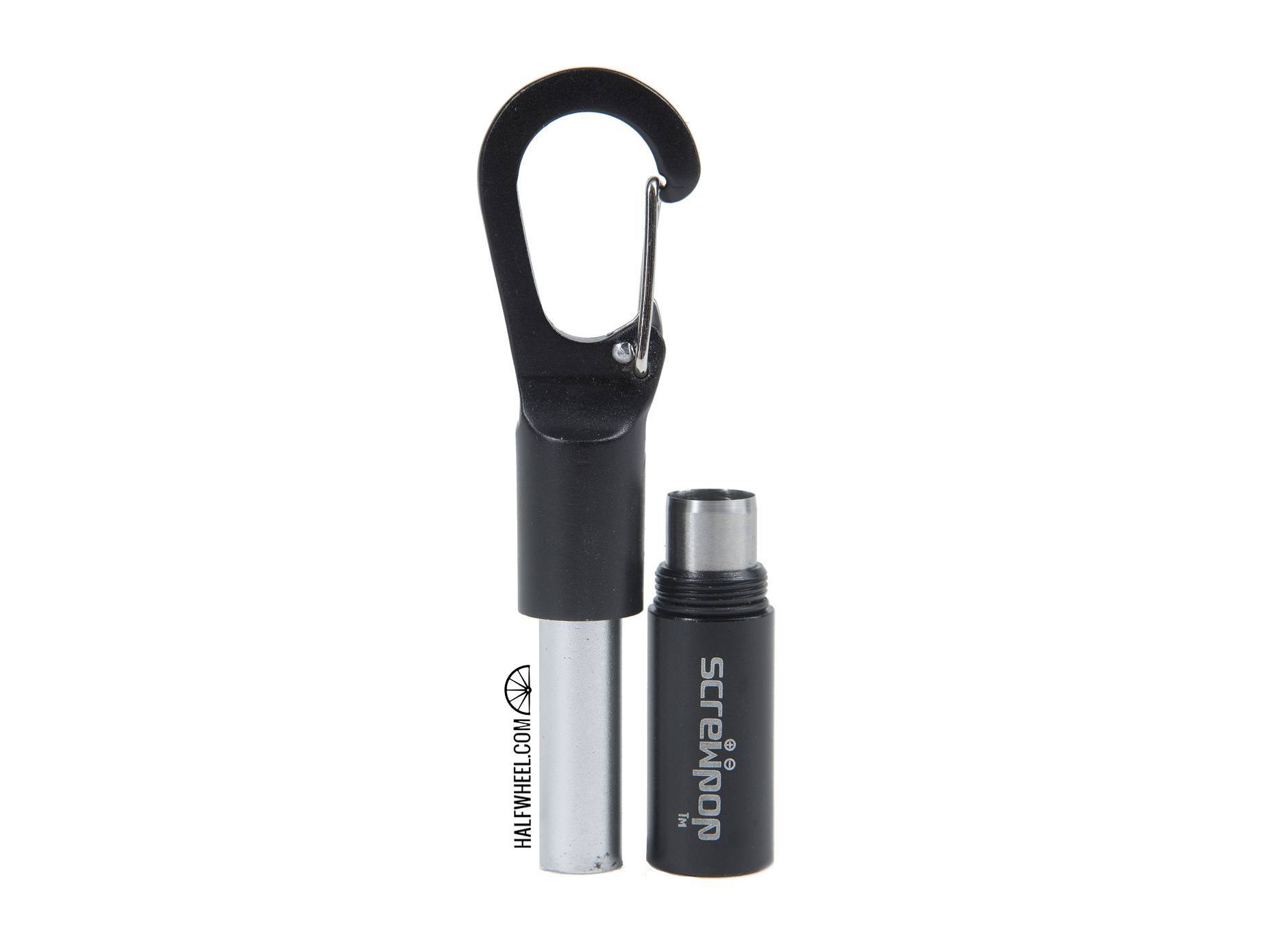 The operation of the Screwpop could not be easier: just unscrew the bottom piece from the top piece and remove, leaving two pieces. Unlike the first incarnation of the Screwpop, the newest version has the punch on the piece you remove. This means when you are done unscrewing, you are left with two separate sections: the actual punch — which is hollow — on one side and the key ring/beer opener on the other. Once you push the tip of the punch into the cap of the cigar and remove, there are some pieces that are left inside the opening, which are easily forced out when you screw the punch section back onto the “Ejector Rod.” In addition, the other end of the Screwpop 2.0 is doubles as both a way to attach it to your key ring—or anything else, for that matter—and a bottle opener. During the month that I was testing it, I used the bottle opener about 15 times (someone has to do reviews at Tenemu, right?), and while it does take a bit of getting used to the first couple of times, after that it goes without a hitch. No, it is not as good as a real bottle opener, but as an addition to something that you already have on your key chain, it is perfectly usable, and can be really quite handy in a pinch.

In actual use, the punch tip is quite sharp, and cut through every cigar cap I used it on with very little effort. In fact, the tip is so sharp that in all the times I used it, I did not have one time when the cap was damaged due to the pressure I had to put on the punch to get it to cut, something that has happened to me quite often with other punches in the past. Pulling the punch out of the cap after cutting is smooth as silk, and left no residual pieces that could get in my mouth. 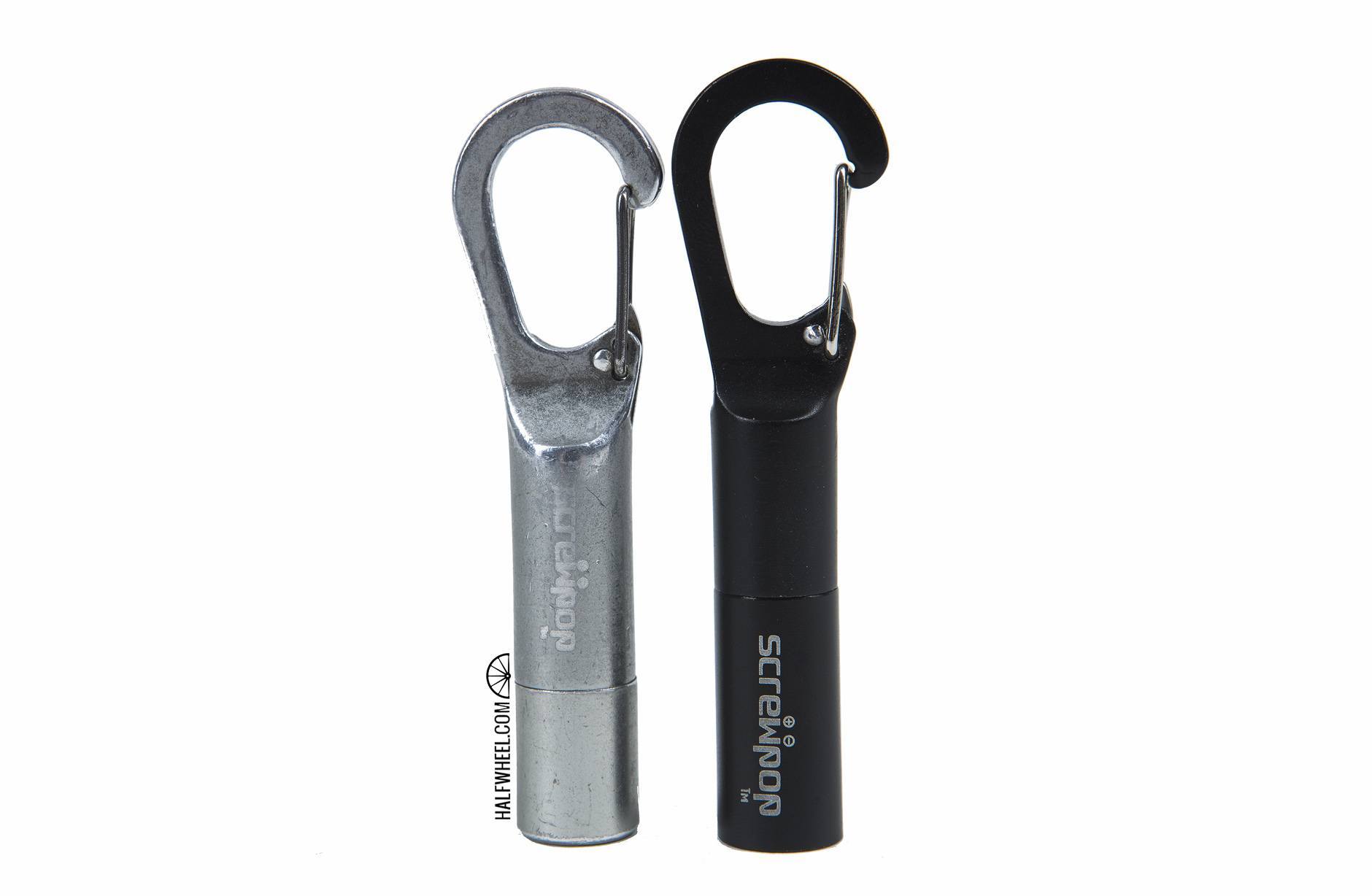 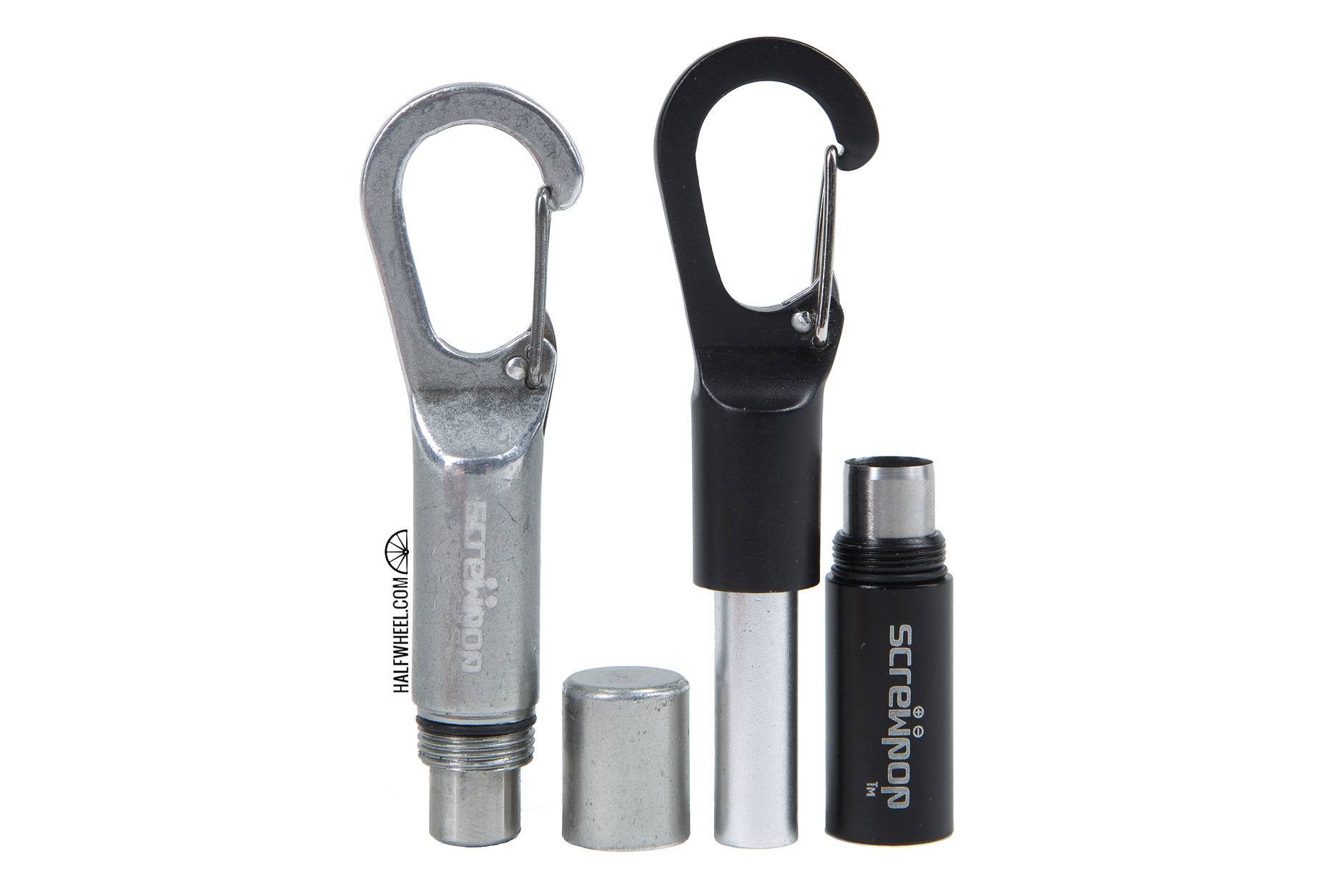 Having said all of that, there are some issues with the Screwpop 2.0 overall. The first problem was the fact that there are no choices with the size of the punch you can use, the size you see is the size you get. This caused some minor inconveniences when I used it on smaller ring gauge cigars — say, anything below about a 48rg — and don’t even bother trying it on cigars that are 42rg and below. There is also the very real potential for the actual punch to be lost, since once you unscrew it from the keyring section, it is quite small overall. The original version also allowed you to store small things like matches or pills inside the punch, a feature that is lost in the new Screwpop.

While there are plenty of cigar punches on the market, competitors that feature all of the advantages the Screwpop Cigar Punch 2.0 offers are few and far between. XIKAR and Vector offer stand alone punches that attach to key rings, but do not have a bottle opener option, and while the XIKAR MTX Multi-Tool does cut cigars and have a bottle opener, it is not an actual punch, and costs more than twice as much. 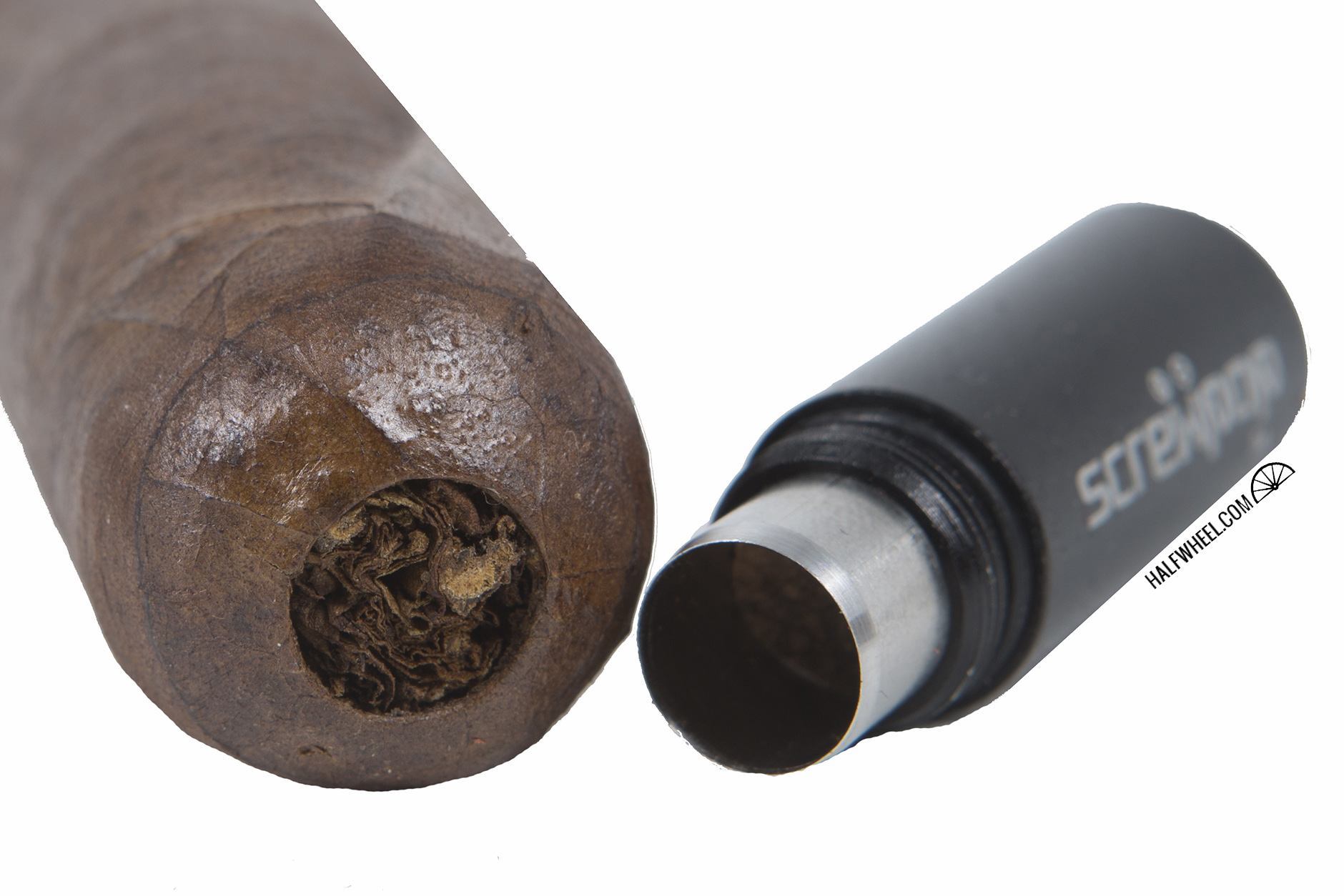 After using the Screwpop Cigar Punch 2.0 for cigars I smoked for a little less than a month—other than for torpedoes, which I still cut—I am quite impressed with it. I honestly do not punch many cigars, but the ease of use that the Screwpop 2.0, along with the fact that it is easy to keep on my key ring may change that. The newest version is miles above the original both in terms of design and function, and well worth the increase in price. While I don’t think I will be switching to a punch cut for the majority of my cigars, the Screwpop Cigar Punch 2.0 is easily worth the real estate on my key ring for those times when I want to.

The sample for this review was sent to halfwheel by Screwpop.