Almost one year ago to the day, Screwpop Tools announced it would be releasing a new cigar cutter to go with its already existing Cigar Punch. Made entirely of stainless steel except for the brass eyelet, the Screwpop Cigar Cutter measures just 1/8 inch x 1 inch x 3 inches while weighing just 1.2-ounces. The accessory is available in two different finishes: stainless steel and black titanium nitride, with both retailing for the same $14.95 suggested retail price. The Screwpop website has this to say about the Cigar Cutter:

The Cigar Cutter could easily be mistaken for a straight edge razor upon first glance.  However, our ingenious design uses a folded wing detail that dubs as finger grips.  And, it closes safely into place under a high quality engineered friction fit design so it can travel with you.

Incorporating a bottle opener is a must.  We racked our brains and were able to cleverly sneak one in on this truly compact Cigar Cutter design.

Visually, the Screwpop Cigar Cutter is quite impressive. There are a lot of great curves and lines that make it instantly attractive, and it is obviously compact enough to take up very little space in your pocket or on your keychain. 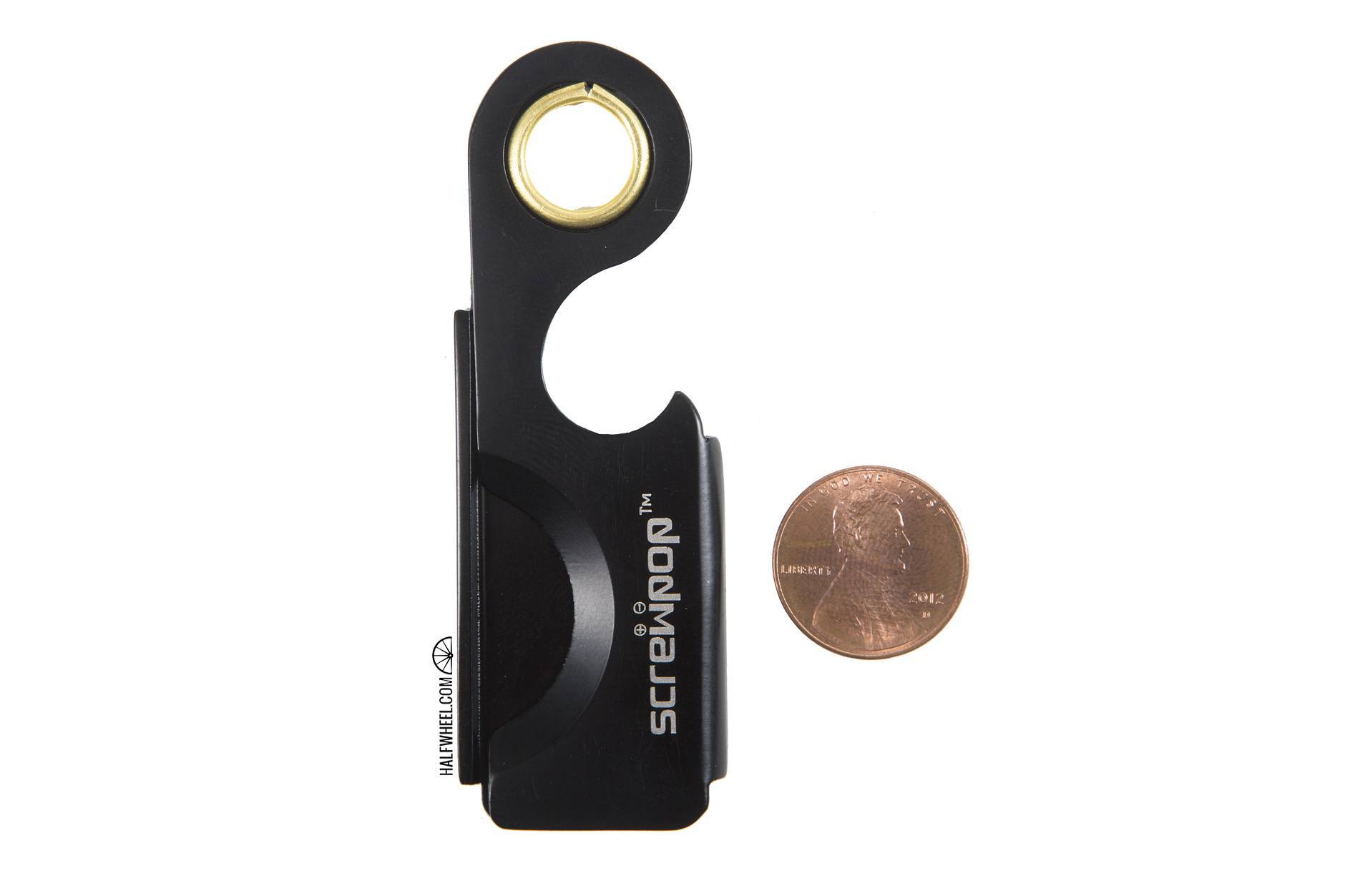 The actual cutting action is fairly simple, and has some obvious similarities to cigar scissors: just open the two blades to the desired size of the cap you are cutting, insert the cap of the cigar into the opening, then push the two blades together in a clean motion to cut the cap.

Or, at least that is the theory.

In actual practice, from the first moment I picked the Screwpop Cigar Cutter up, I knew there were going to be issues. First and foremost, out of the box the two blades that make up the cutter are so stiff that no small amount of effort will close them together, never mind actually cutting a cigar with them. A bit of oil worked wonders, but it really should not be an issue to begin with. In addition, the two blades constantly rubbed up against each other, causing friction that only exacerbated the aforementioned stiffness. 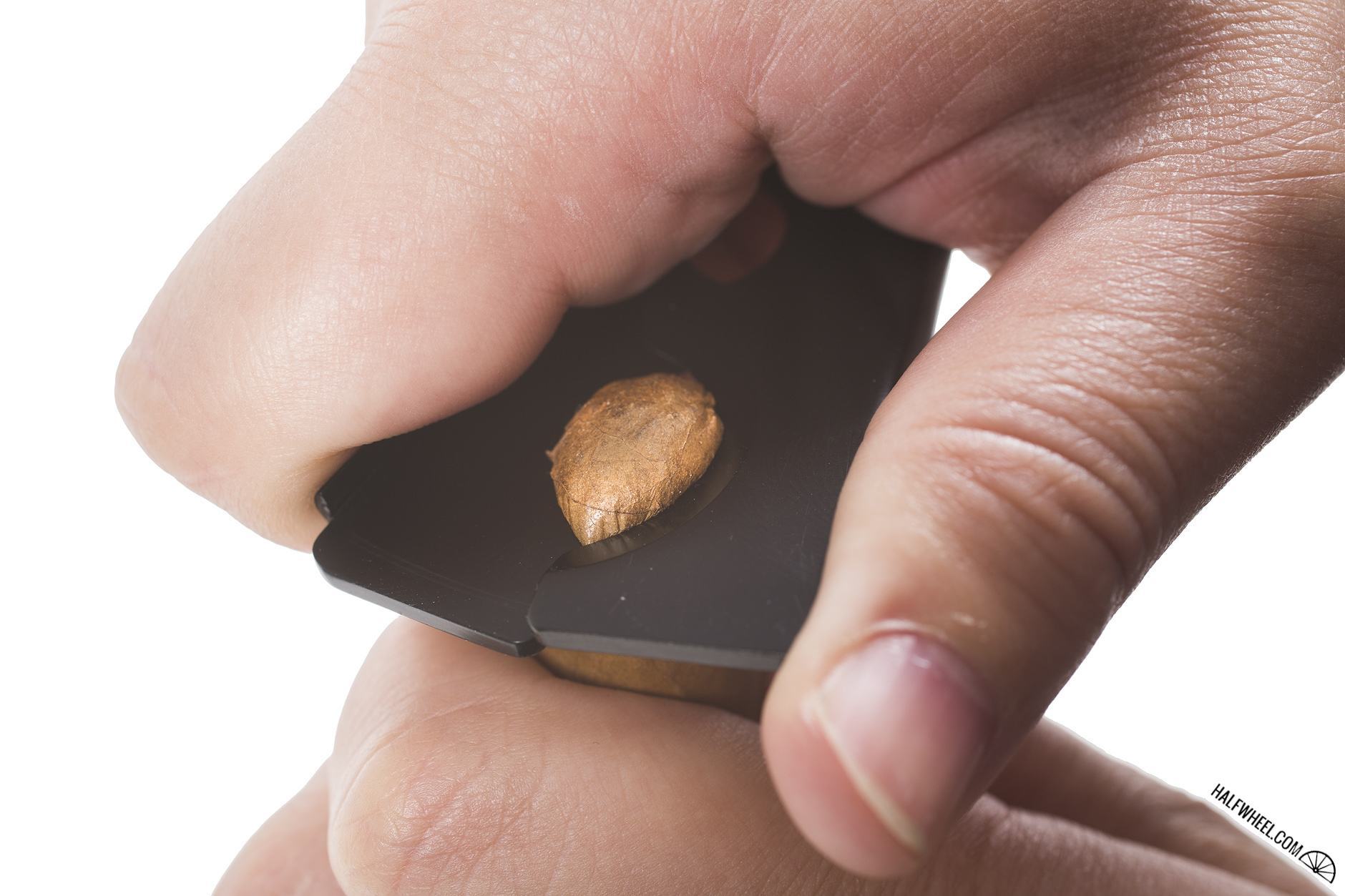 Secondly, the actual cutting of a cigar is even worse than I anticipated. The blade is nowhere close to what I could consider sharp and the action of pushing the two ends closed does nothing more than mangle a cap, leading to destroyed cigars and chunks of tobacco falling everywhere. In fact, there were multiple times when using this where I realized that the blades were so dull, they actually pinched the cigar together before cutting, something I have never seen before with any cutter I have used. This happened again and again, and while I thought it impossible to get worse, after about a week of use, the blades were noticeably duller than they were out of the box, essentially rendering the cutter useless. As a bottle opener, the Screwpop fares a bit better, albeit with a fairly large condition. It opens bottles pretty easily, although I have to say, after using it more than 20 times, the entire balance seems a bit wonky, and the large round ring on the opposite end of the opener tended to slip when in use. In addition, if you have the opener attached to a key chain, the only way to use it to actually open bottles is to put the keys on one side with the key ring over the crown. This is an extremely awkward motion, although to be fair, once you get past that fact, it does indeed perform its intended job. In terms of competition, the XIKAR MTX Multi-tool are cigar scissors made of stainless steel that fold up and also includes a screw driver for adjusting flame height on a lighter, a cigar poker, and a bottle opener, but is also priced more than three times higher than the Screwpop.[ref]The MTX is the everyday cutter for Brian Burt, Charlie Minato and Patrick Lagreid. I have a daily cutter, but given my task of reviewing cutters, I’m always using a different one.[/ref] In addition, there are multiple manufactures who produce full-sized cigar scissors in various price ranges, but none of them have that portability of the Screwpop Cigar Cutter, nor do they have the added benefit of a bottle opener.

There is no way to say this nicely, so the direct approach seems best: as an accessory intended to cut cigars easily and cleanly, the Screwpop Cigar Cutter fails miserably. The combination of dull blades and extremely awkward design makes what should be a quick and painless act so frustrating that it almost defies description. As I was reviewing this “cutter,” I actually dreaded having to use it, knowing that every cigar I tried to cut would end up a mangled mess. In fact, I had to stop cutting my review cigars with this after about a week, or it would have negatively affected the cigars I was reviewing at the time.