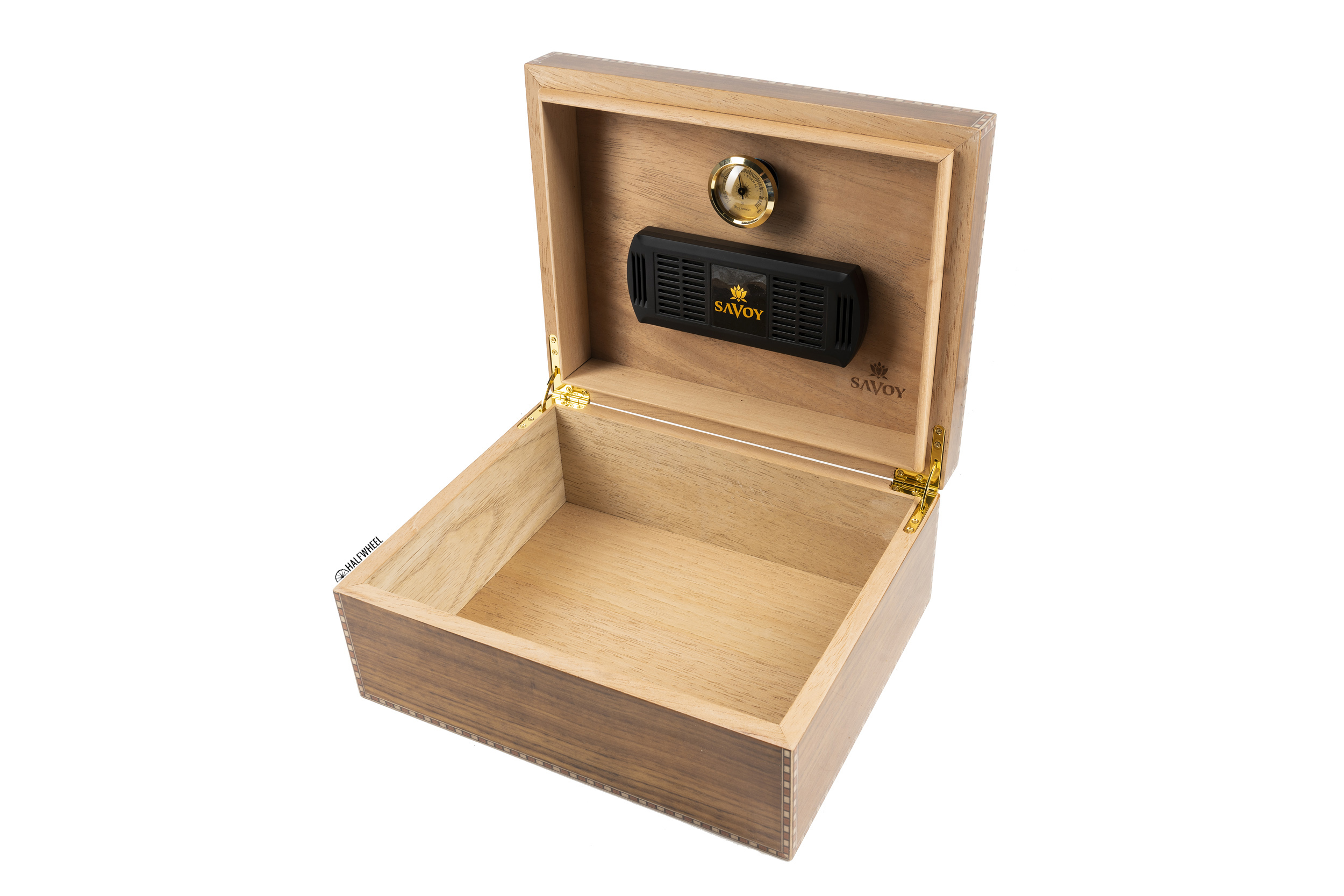 About six months ago I was trying to figure what humidor to buy for my next review. I ended up buying seven.

It’s not that I wanted seven more humidors, rather, I wanted to try to figure out if there was a humidor I could recommend to most people. Specifically, I wanted to see if I could find what I imagine is the most requested humidor: one that looks like a traditional wooden humidor, can hold around 100 normal-sized cigars and costs around $100.

I then went looking and realized that wasn’t going to go well. Just looking at pictures of humidors that met those qualifications didn’t inspire confidence, so I modified the parameters: it needs to look like a traditional humidor, hold around 75 cigars and cost no more than $175 before tax and shipping.

This is the first review of these humidors, with subsequent reviews hopefully getting published every other week or so for the next four months. Once the seven had arrived at the office, I randomly picked the order for the reviews, and first up is one that makes for a very logical starting point: the Savoy Marquis. 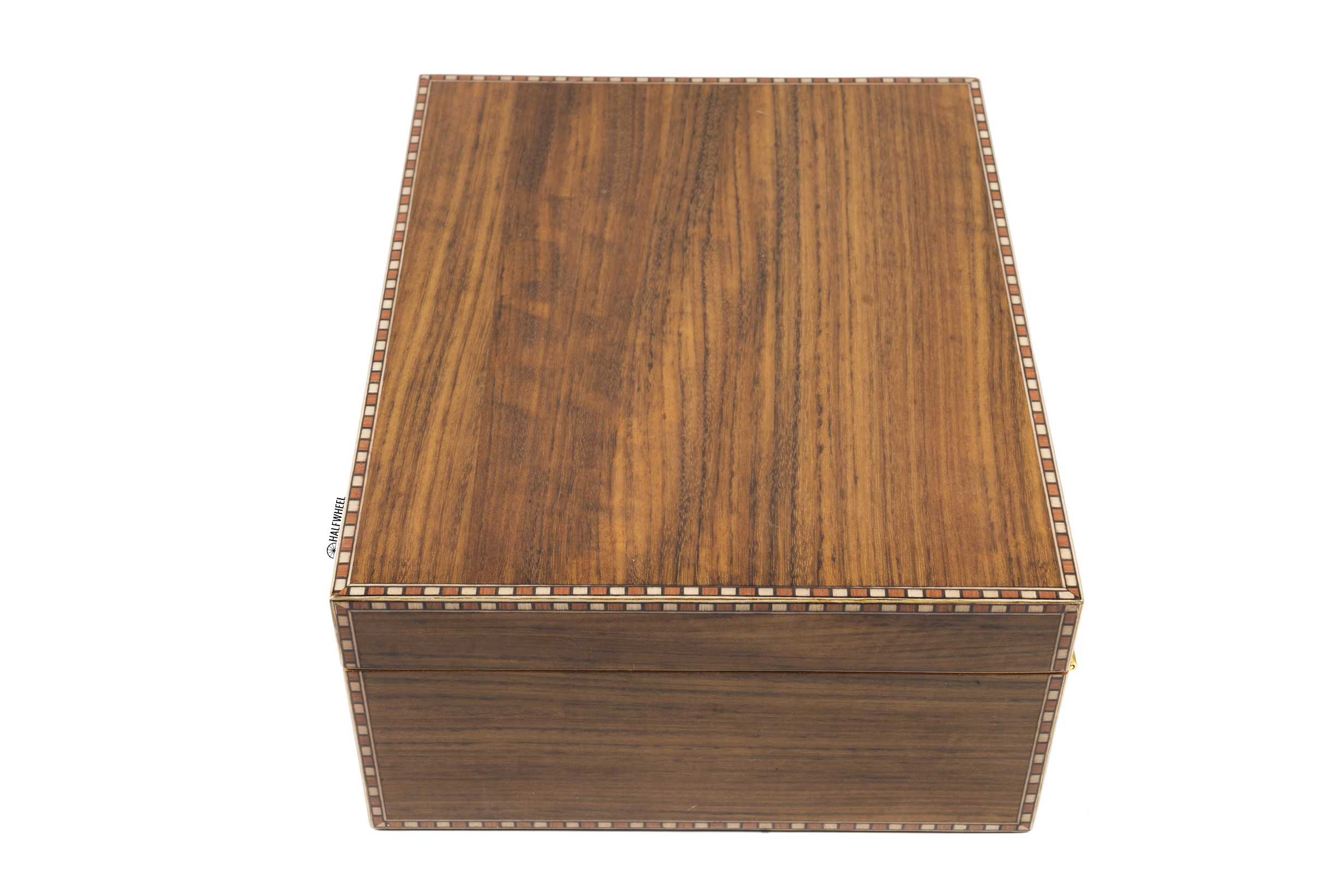 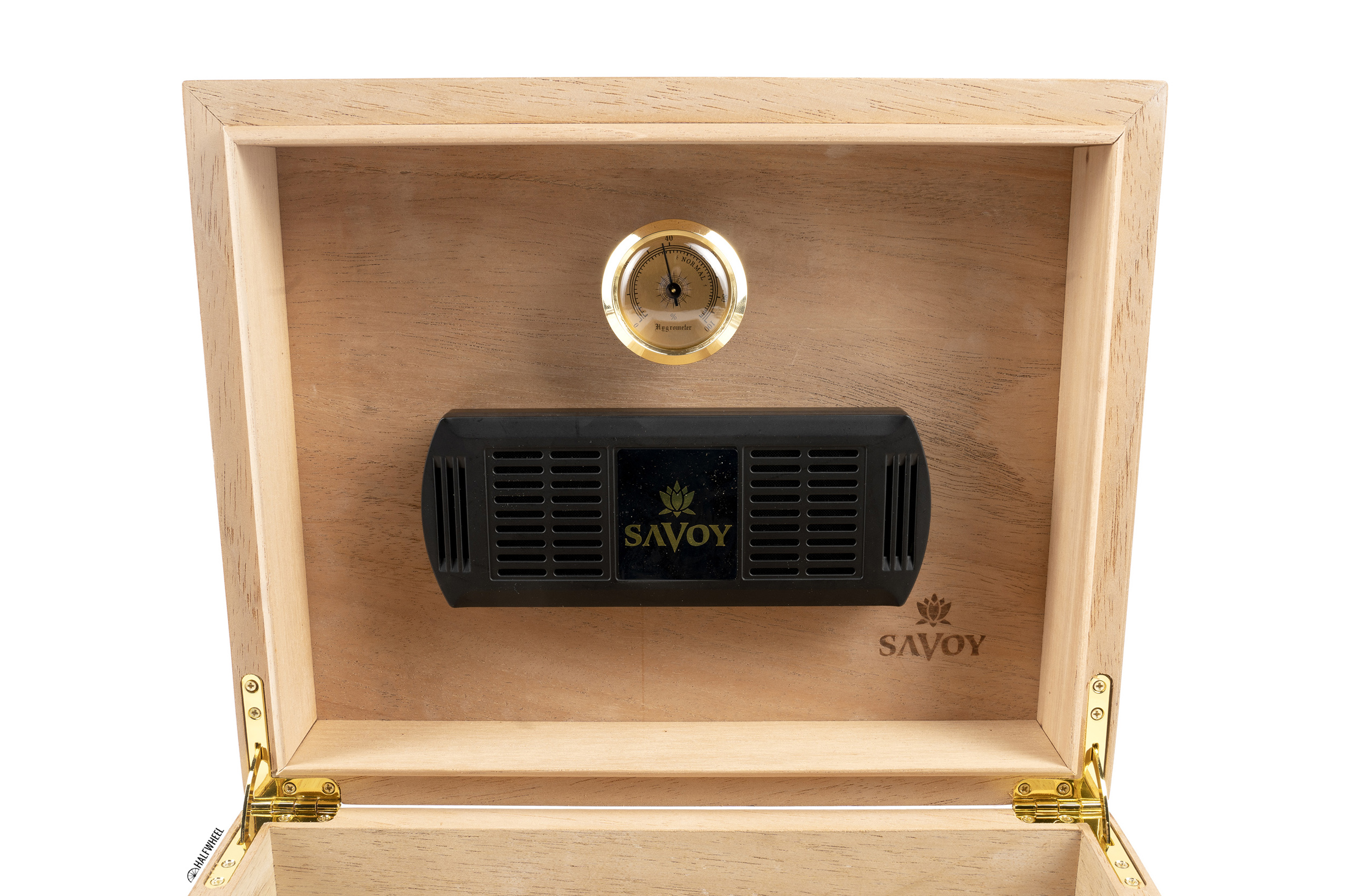 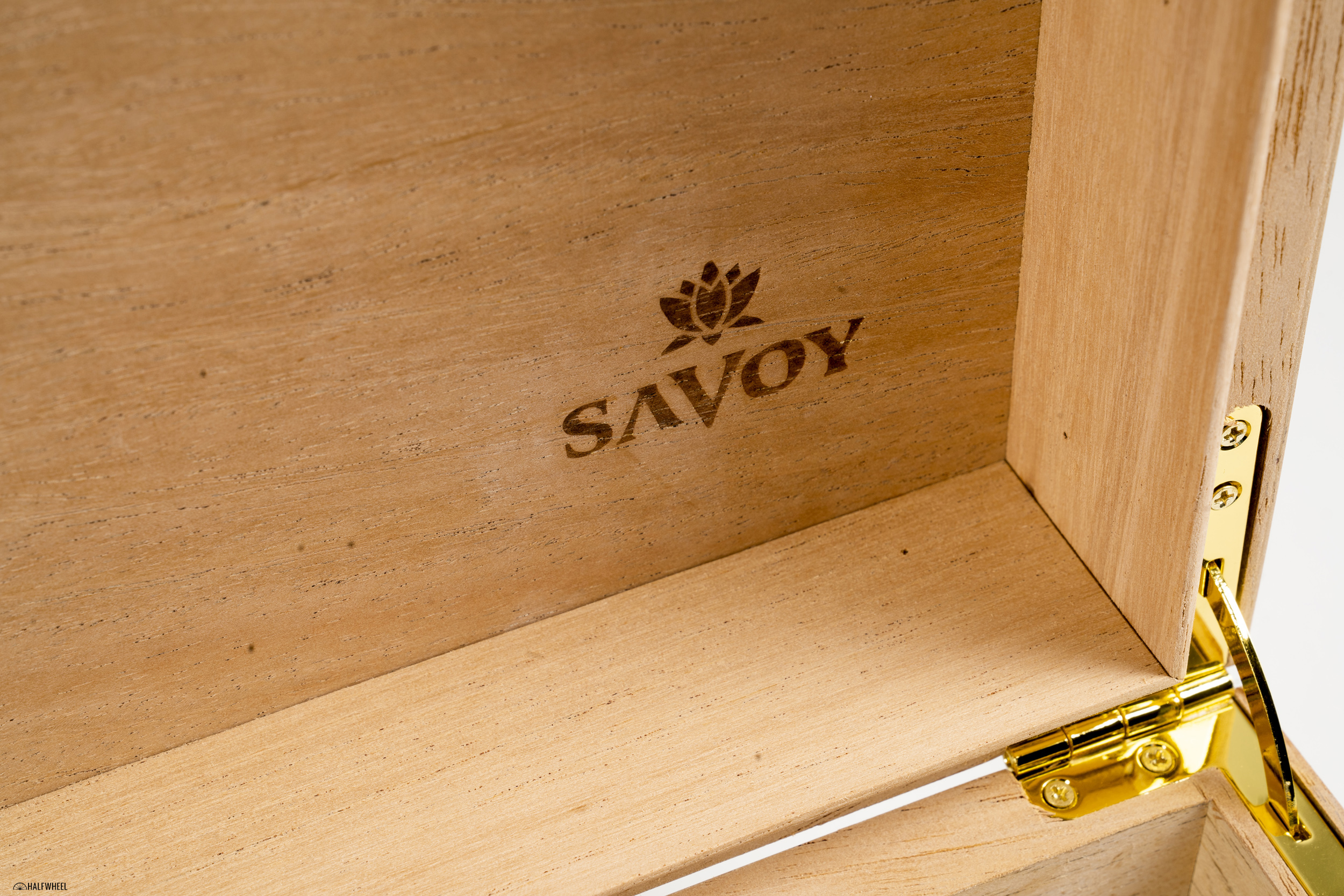 Savoy is Ashton’s humidor brand, which makes it a brand that you are likely to find on the shelves of a good number of U.S. retailers. Ashton divides its humidors into two categories; there’s the regular Savoy brand and then the upgraded Savoy Executive, which is a really good humidor and a longtime favorite of mine.

Like most humidors from Ashton, there are multiple sizes of the Savoy. Ashton designates them as follows:

The large model is notably different as it includes both a tray and an exterior lock and key, two features not found on the two smaller sizes. 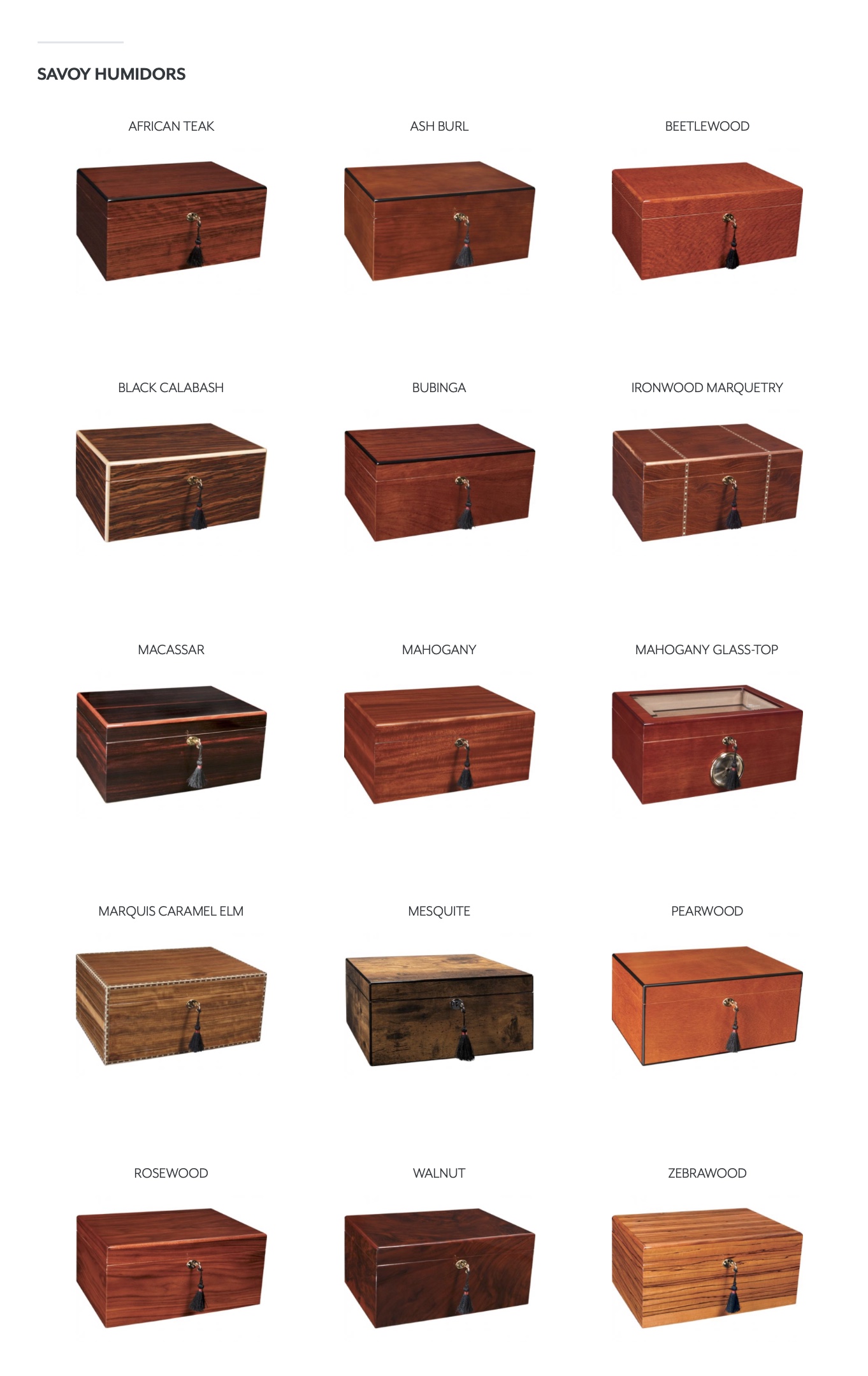 From what I found on the Ashton Distributors website, there are 14 different wood options for the Savoy line. Some models also include an Extra Large (15 7/8 x 12 x 8 1/8) size rated for 150 cigars. Outside of the Mahogany Glass Top, I’m guessing that these are all more or less the same humidor just with different finishes, but I haven’t individually inspected all the different models. 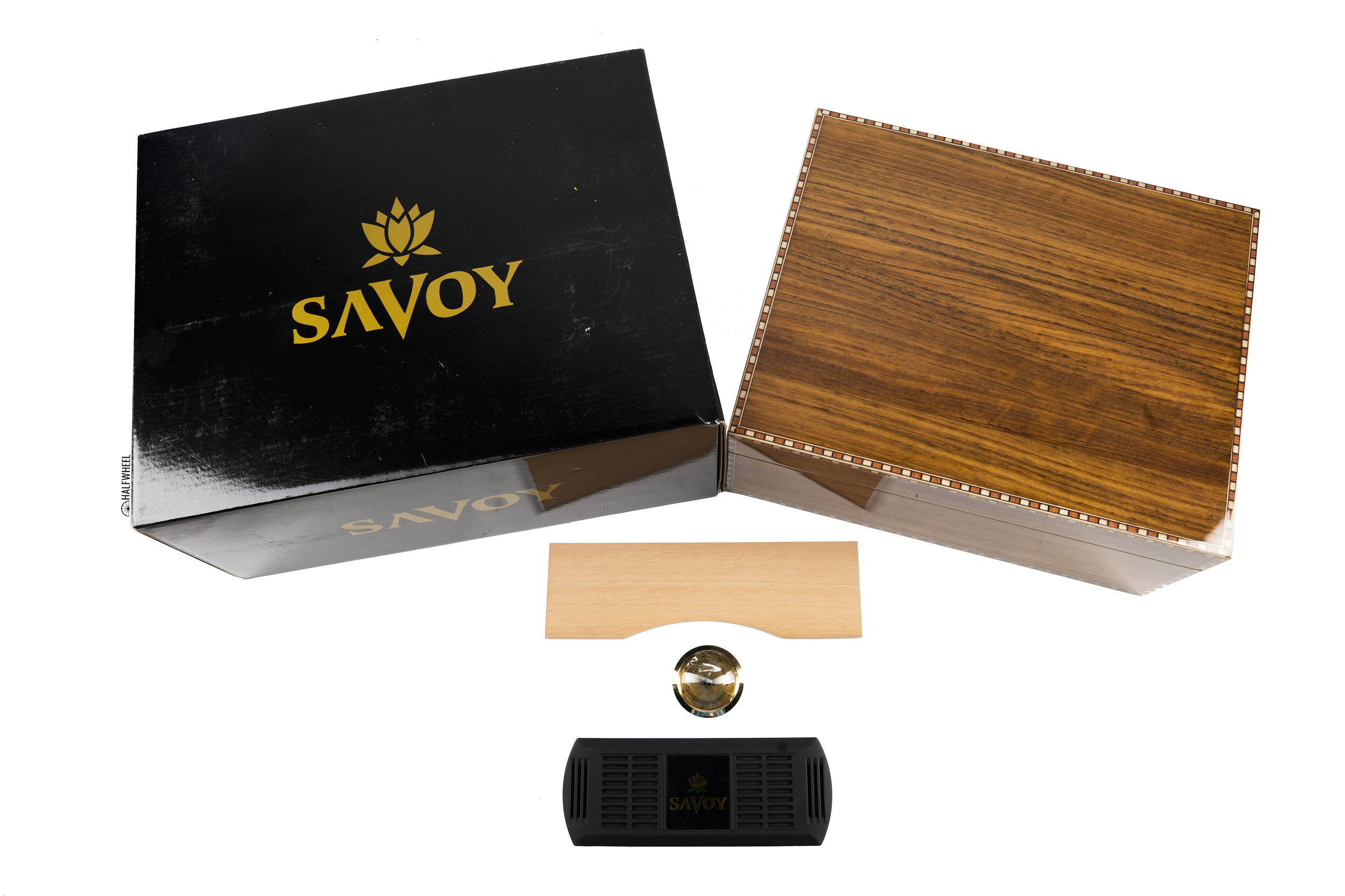 There’s the humidor itself, a divider, an analog hygrometer and a Savoy Humidification Device, which uses florists’ foam inside.

Here are my thoughts on florists’ foam, which aren’t specific to how Savoy uses it:

There are three magnets already installed into the lid of the humidor: one for the hygrometer and two for the humidification device.

The inside of the bottom part of the humidor is roughly 10.75 inches wide, 8.45 inches deep and 3.67 inches tall. Per Humidor Discount’s dimension calculator, that should hold 63 robustos, which is more of a rating of the interior dimensions than a guide. You can probably fit a few more cigars as there’s a bit of extra room in the lid, but not many.

That is as follows: 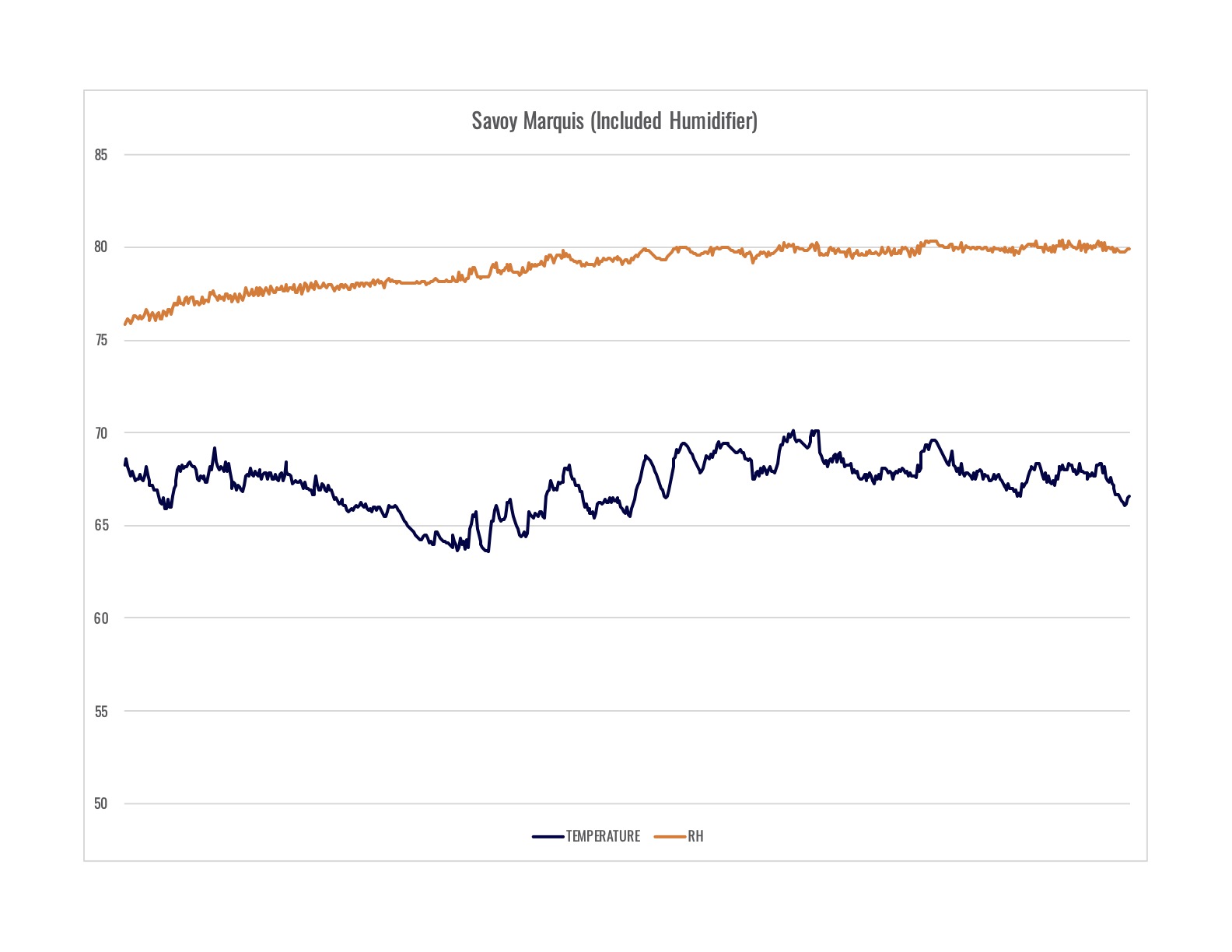 Not surprisingly, the humidifier that uses florists’ foam kept adding to the humidity after seasoning. Ashton says that this should be refilled every two weeks, which seems like an excessive amount for me.

For what it’s worth, the humidifier also developed some mold on it, something that isn’t surprising given that it spent nearly two weeks at 80+ percent relative humidity. 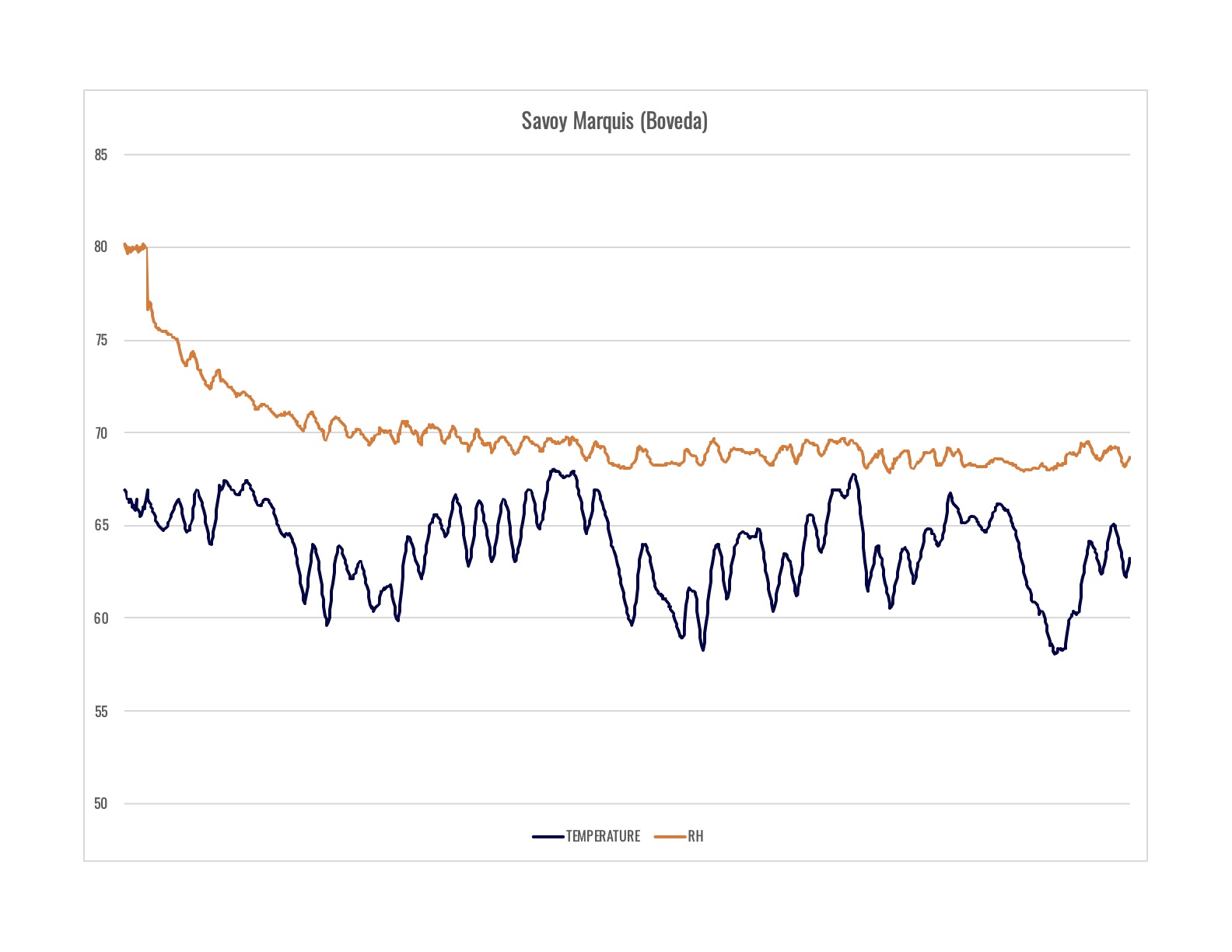 That relatively stable orange line you see at the start is the first day or so of the Bovedas, where it was clear they were struggling to absorb the excess moisture from the four-weeks of the included humidifier. It took 48 hours of the Bovedas being inside before it dropped below 75 percent relative humidity. After another week, it was below 70 percent and got into the Boveda’s set level of 69 percent.

Given all of the excess humidity in the Savoy humidor I’m not really surprised by these results. I forgot to weigh the Bovedas coming out of the humidor but based on the above they probably came out heavier than what they went in given they were basically just acting as a way to remove moisture. IN THE DRY CABINET

The Savoy lost close to 16 percent in relative humidity during its two weeks in the dry cabinet. I’m not exactly sure what to make of this in comparison to the other humidors that have gone in the dry cabinet because the Savoy is the only one that went into the box at a number above 60 percent relative humidity, let alone one close to 70 percent. In short, the Savoy has just had much more humidity to lose compared to the others.

What is clear is that the Savoy doesn’t seal well. More on that below. 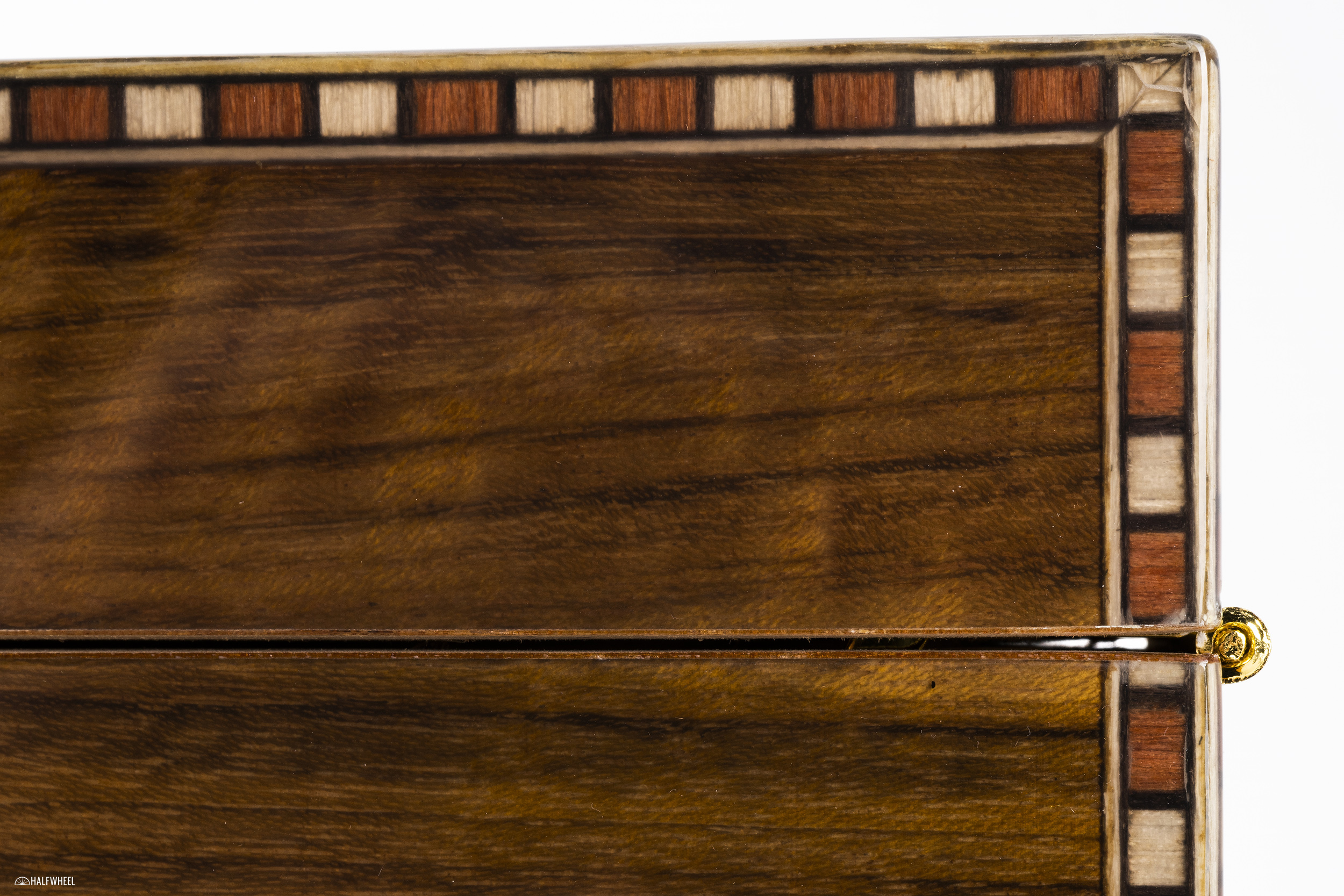 As I mentioned above, I purchased seven humidors that I think are representative of this category and as such, direct competitors. I’ll update this review as testing is completed and those reviews get published. All of the prices for those humidors are the prices we paid before tax and shipping. If you find one that doesn’t have the visible gap in the back, then it becomes a maybe, but the problem is that I tested one that has that gap and there’s just no way to recommend the humidor. That said, this is also a glowing recommendation for why you should buy your humidor in-person: much like a car, you can do a pre-purchase inspection to make sure you aren’t about to spend money on something that is never going to work.

The humidor for this review was purchased by halfwheel.