For the most part, the humidors you find for sale at your local cigar shop are probably not made very well. They are usable, but most stores have found it challenging to get customers to buy products other than the $100 made-in-China 125-count humidors that come in a variety of shapes and sizes. The alternatives generally begin around $500 and lack any sort of national distribution, so the options in stores are usually quite slim. And then there is Savoy. 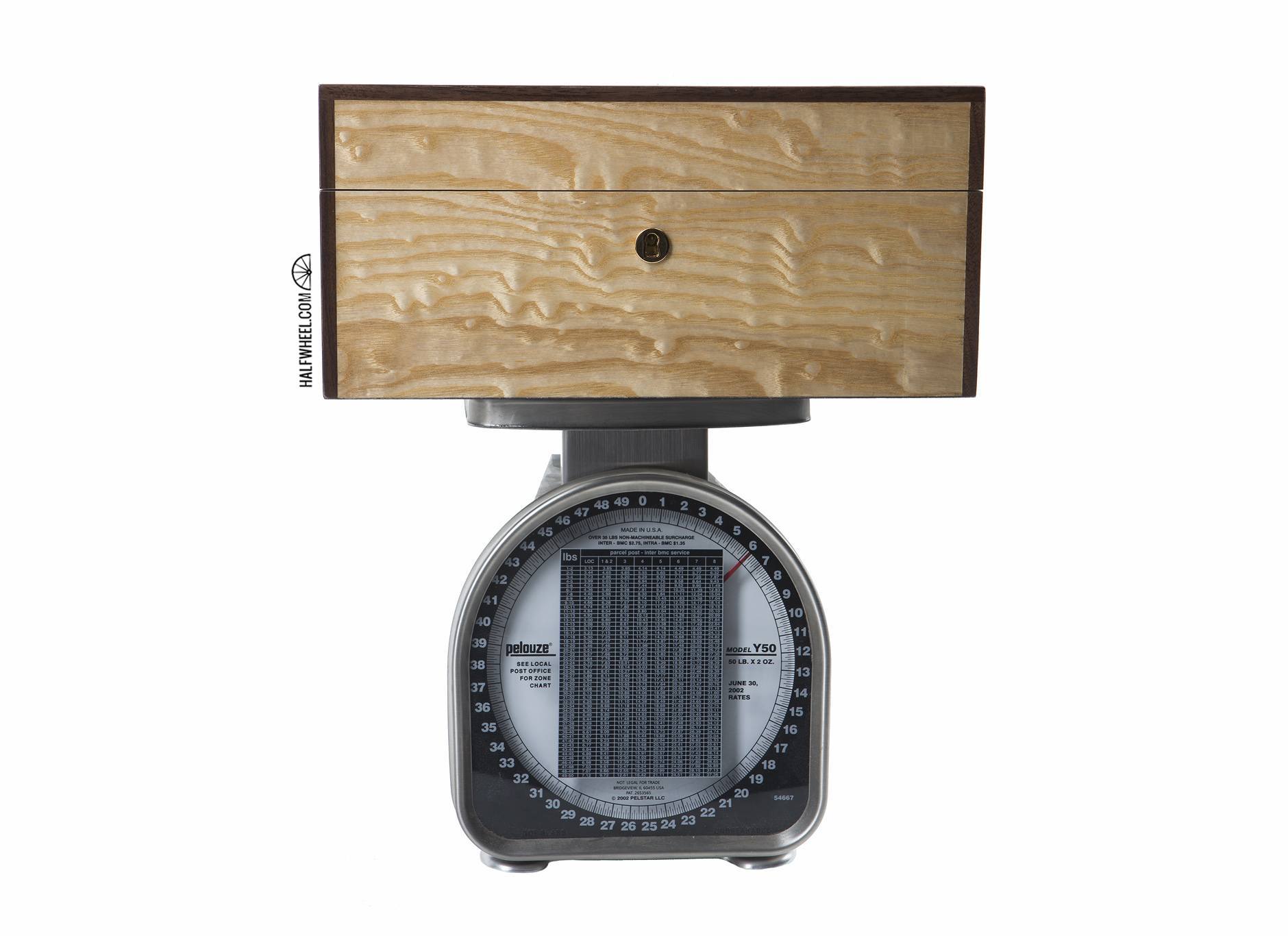 The brand of accessories is owned and distributed by Ashton, giving it much better access to the shelves at brick and mortar retailers in the U.S. Like the vast majority of humidors sold in the U.S., Savoy’s humidors are made in China. Yet unlike many of the Chinese-made humidors, Savoy actually makes some usable humidors. There are four basic lines of humidors from Ashton: Savoy Desktop Humidors (12-count), Savoy Humidors, Savoy-Boveda Humidors and Savoy Executive Humidors.[ref]Ashton and Boveda recently announced that their distribution agreement would be coming to an end as of Jan. 1, 2015, and there’s been no word on what happens to the Savoy humidors that come with built-in Boveda storage.[/ref] 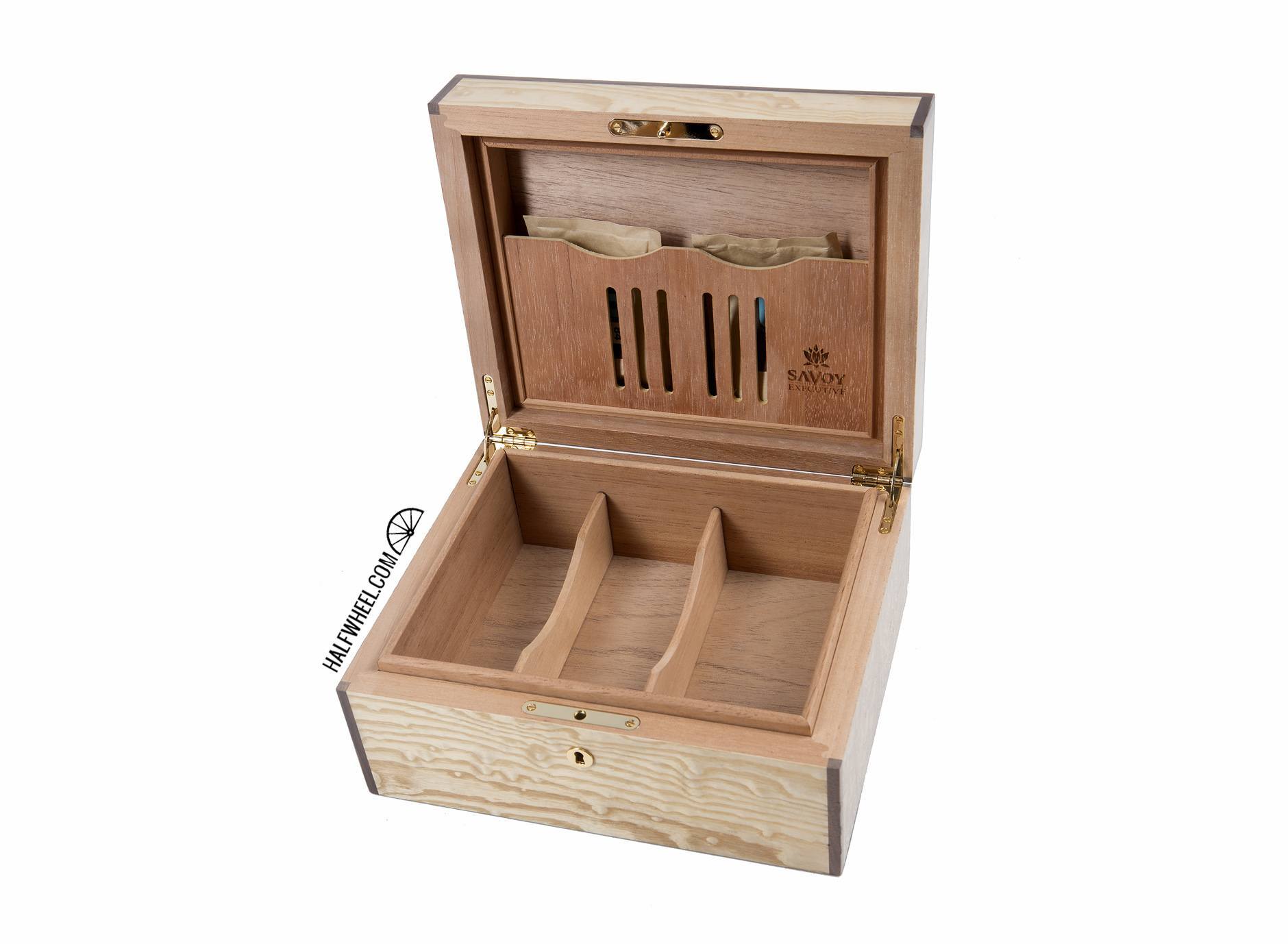 For this review, I went the direction of a humidor that I would actually use personally, the top of the line Savoy Executive in Olive Ash Burl. It’s one of four finishes offered in the Executive series, each of which is offered in three sizes: Small ($325), Medium ($435) and Large ($525). Unlike just about every other humidor manufacturer, Ashton seems to apply realistic cigar estimates to its humidors, meaning the 11 inch x 9 inch x 5 1/4 inch Small model is rated for 25 cigars, although I could fit a few more.

Ashton has also figured out how to package the humidors. A brown cardboard box holds a black cardboard box, which uses foam padding on all sides and the humidor itself wrapped in tissue paper to protect against scratching. While it might seem trivial, the small details matter when you are spending $13 per cigar for a storage option. Inside is a key, two wooden dividers, two 84 percent Boveda seasoning packs and two 69 percent Boveda packs. Ashton sells two lines of humidors that are made specifically to be used with Bovedas. Rather than using a magnetic lid for a traditional hygrometer, a shelf is built into the top of the unit to hold Boveda packs. Boveda itself offers the accessory for those wishing to retrofit their own humidor to the same style, but it’s nice to have it built in, particularly given it’s long been my recommended storage option. 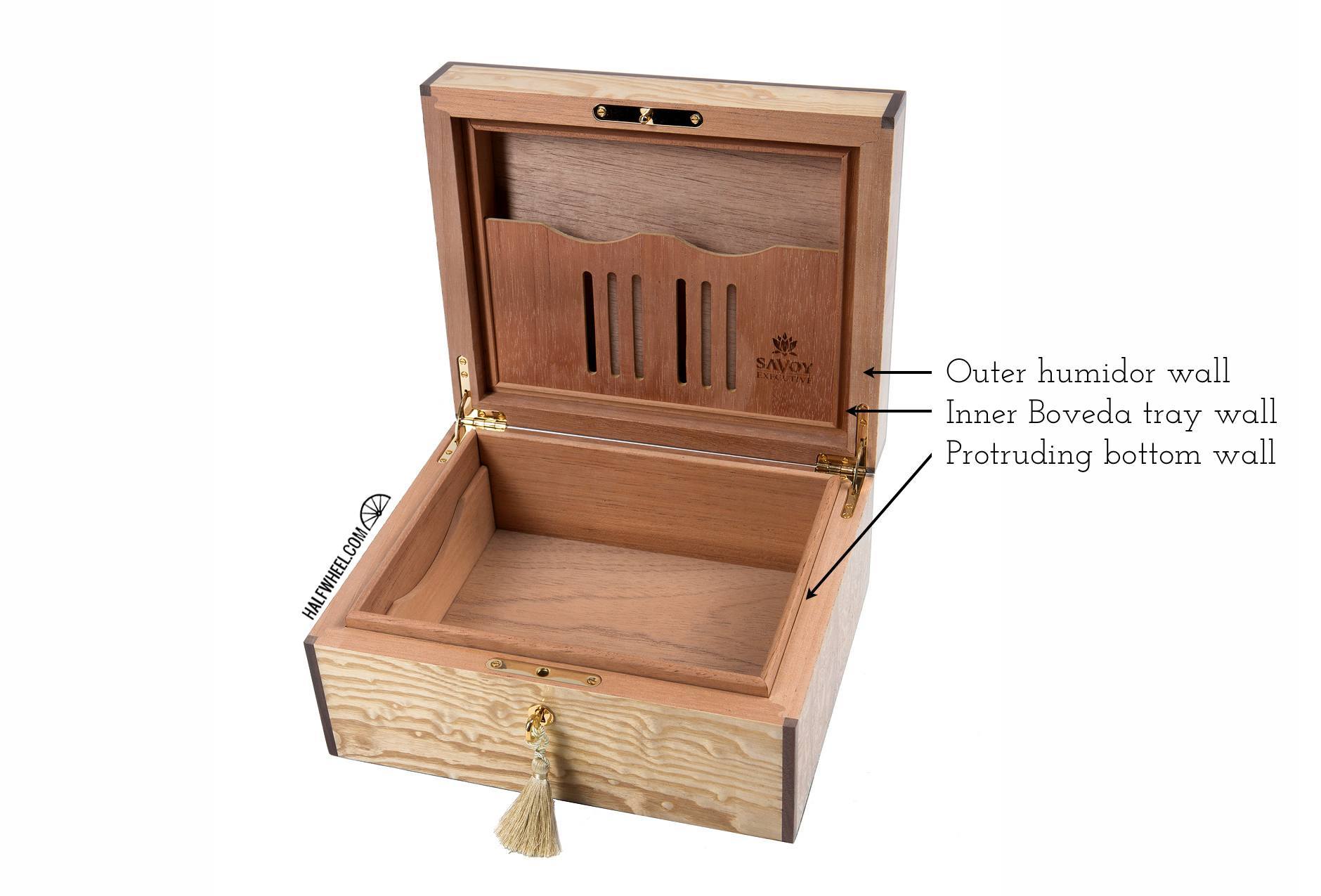 While that’s unique, it’s not the most unique part of the lid. The Executive humidors not only feature thick wooden walls, but a unique tri-locking sealing system for which I’m sure Ashton has a unique trademarked name. The outermost inner wall of the lid goes on the outside, while a protruding wall from the Boveda storage piece of the lid goes on the inside of the unit. Sandwiched in between the two is the inner wall from the bottom part of the humidor. I’ve seen a lot of humidors with impressive seals, but the simple approach of more is better creates a fairly spectacular seal.

It should be noted, not everything lines up perfectly flush—and that’s a good thing. When it comes to humidors, the internal parts need to have a bit of room to expand or contract because of the humidity that will enter the wood. Anyone trying to make everything perfectly flush, particularly with this many internal components, will end up making a humidor that will quickly crack. 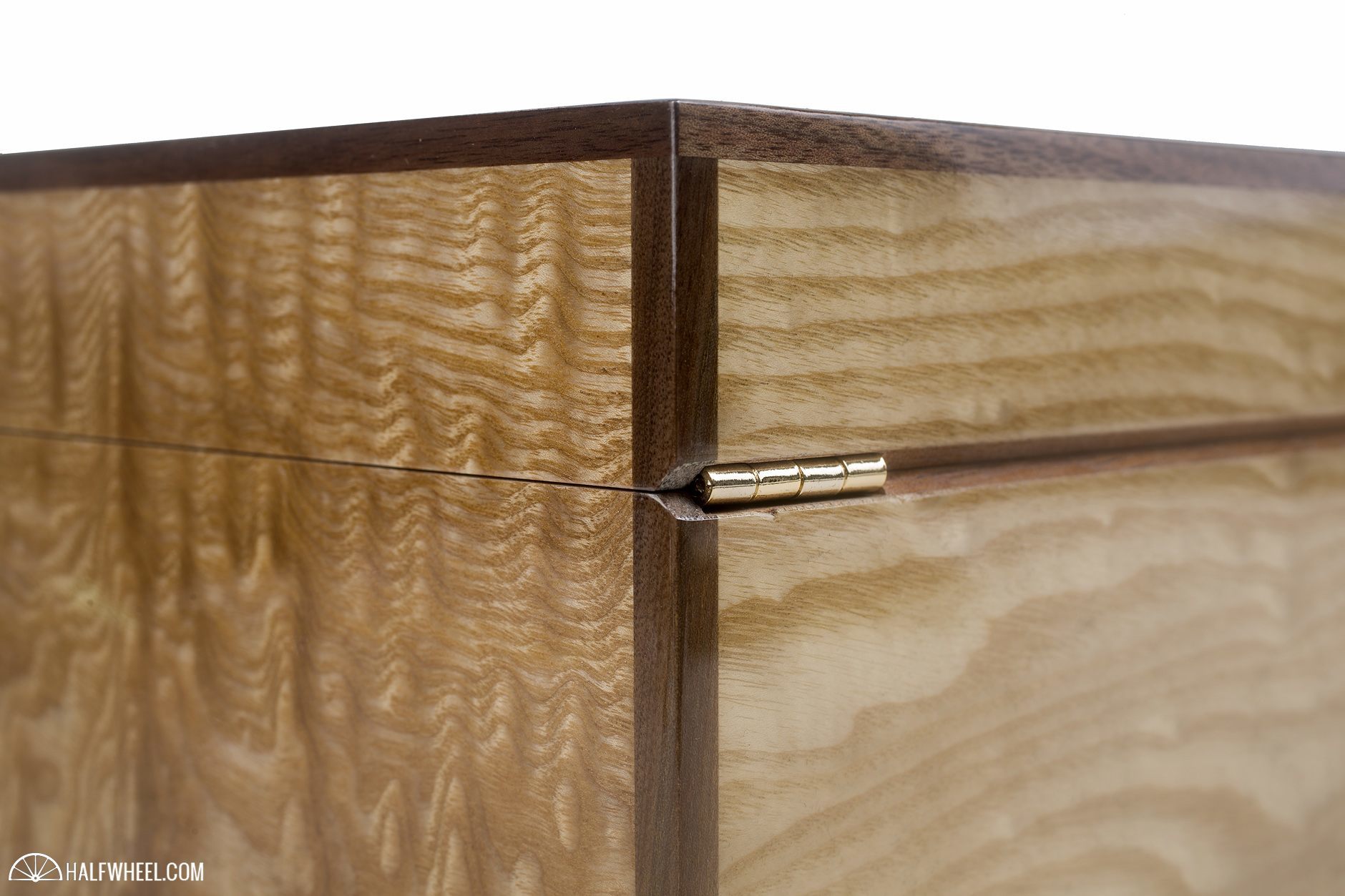 There’s one other feature that I would deem as fairly unique, a groove that runs down the back of the humidor. It’s there to better allow the hinges to work. Ashton uses four different hinges, two side rail hinges and two basic butt hinges, the latter of which need the groove.[ref]The system, as well as the groove is similar to the Adorini Black Slate Deluxe L I reviewed earlier this year.[/ref]

As for performance, I spent about two weeks seasoning the unit via the included Boveda packs. They worked, although my preferred method is a bowl of distilled water. To some degree I wanted to test how the Bovedas performed, but I would recommend using both the included packs and a bowl of water. After that, I placed the 69 percent Bovedas in the unit, a hygrometer for testing, some cigars and sort of forgot about it. A month later I opened the unit up for the first time and it was reading at 69.1 percent RH, good enough in my book.

I’m torn between this in the Adorini Black Slate Deluxe L, which is somewhat similarly-priced. I appreciate Adorini’s unique internal ridge system, but I think the Savoy is a better-made product. While the Adorini is no slouch in the weight department, the unique lid-locking system of the Savoy creates for a much better feeling when opening and closing. Both are very good options, so it’s likely that your decision will come down to which one you think looks better. 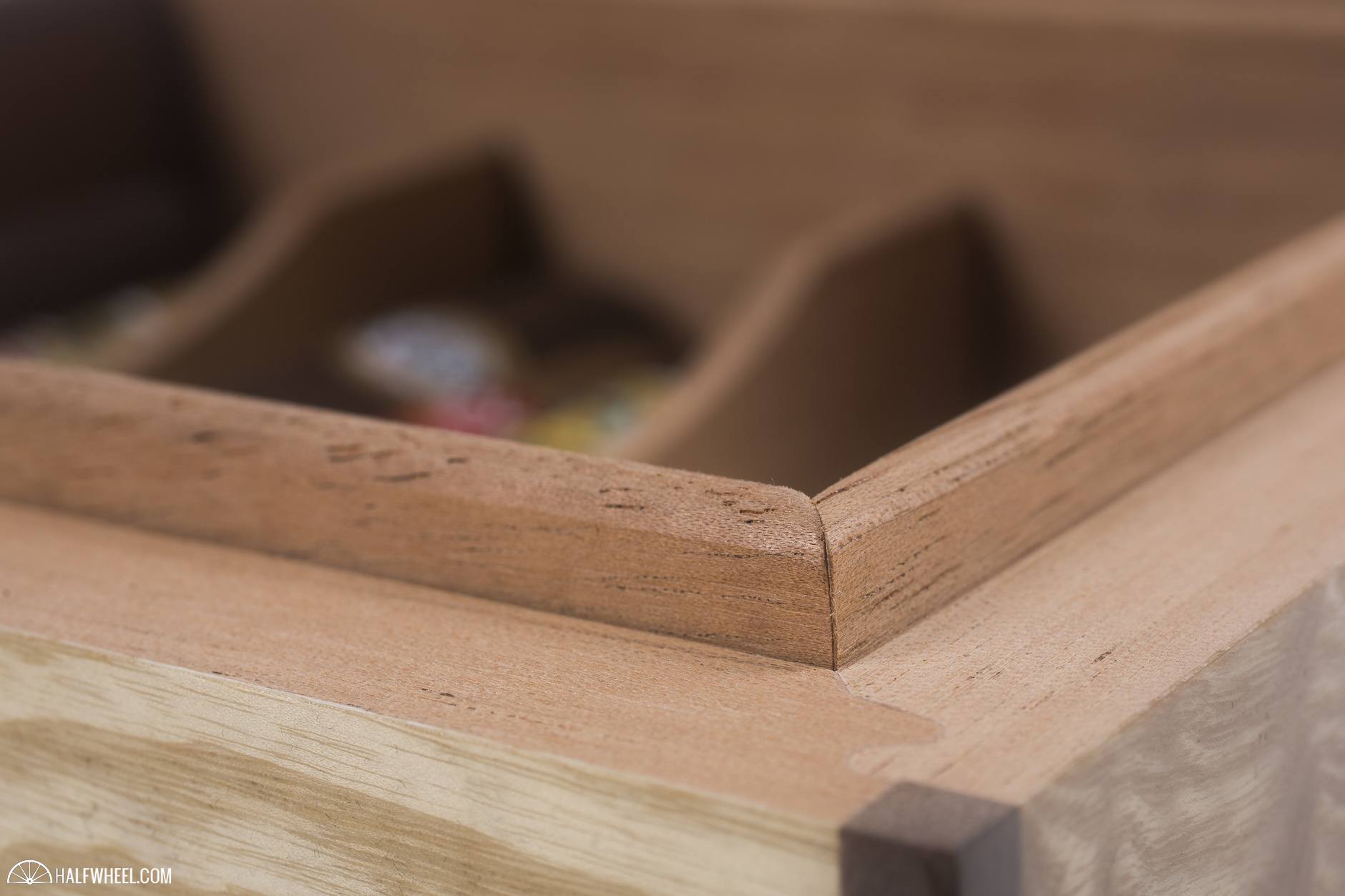 Ashton advertises this as an heirloom-quality humidor and I’m generally down to believe them. It’s not made in America, or Europe. It does not have digital humidification or measurement. It does not connect via wi-fi, but it does work, very well. While you normally can find the humidors online for about $100 cheaper, if you want to feel good about each and overtime you open it—this is a very good starting point.