At the 2013 IPCPR Convention & Trade Show, A.J. Fernandez unveiled the third member of the San Lotano line, a Connecticut-wrapped version of the increasingly popular cigar line. It was being released in the same six sizes— Robusto (5 1/2 x 54), Toro (6 1/2 x 54), Torpedo (6 1/2 x 54), Double Corona (7 1/2 x 54), Gordo (6 x 60) and Corona (5 x 44)—as the two previous versions of the Oval, which used a Habano 2000 or maduro wrapper. The release of the San Lotano Oval Connecticut was joined by two other additions from Fernandez, El Mayimbe and a maduro version of Pinelero.

The San Lotano Oval goes back to 2011, however, when the company showed off the new cigar at that year’s IPCPR Convention & Trade Show and the cigar began hitting retail shelves in the following months. Clay Roberts, the company’s former marketing director, said at the time that “the San Lotano Oval differs from the existing San Lotano line as it is blended with ‘ultra premium aged tobacco’. This provides the cigar a very distinguished balance, according to A.J.”

Also chiming in about the new cigar was Alex Svenson of Cigar.com, who said:

I just spoke to AJ. The wrapper is h2000 grown in Ecuador. It is top ligero priming which he has just enough of to jive with the limited release qty. So think ruination wrapper but darker and stronger. He is also using some of that special Honduras stuff from the new region in the filler. Aside from the honduran filler which is still pretty new, all other tobaccos are at least 4 years old and some up to 7 years aged. He says the cigar is made from a lot of his favorite tobaccos from vintage years and he is very excited about it. They will debut at the trades is this summer and roll out to retail in Q3 or Q4. No word on pricing but I was told it won’t be crazy. Maybe $10 to $14. Boxes will be 30 cigars to a box and each box will be numbered and plated and made entirely by hand using some rare and expensive hard woods, all naturally colored and varnished. That with this new shape which is an industry first should make this an interesting smoke. I hope to burn one in a few weeks and will keep you guys posted!

Jump ahead some four years, and there’s a new, limited production size being added to the San Lotano Oval Connecticut line, a 4 1/2 x 54 petit robusto being made for Elite Cigar Cafe in Addison, Texas. “We wanted to do an exclusive cigar with A.J. Fernandez, available to our customers,” said Kent Pennington, owner of Elite Cigar Cafe. “This is the first in a series of exclusives that we are doing with the company.” 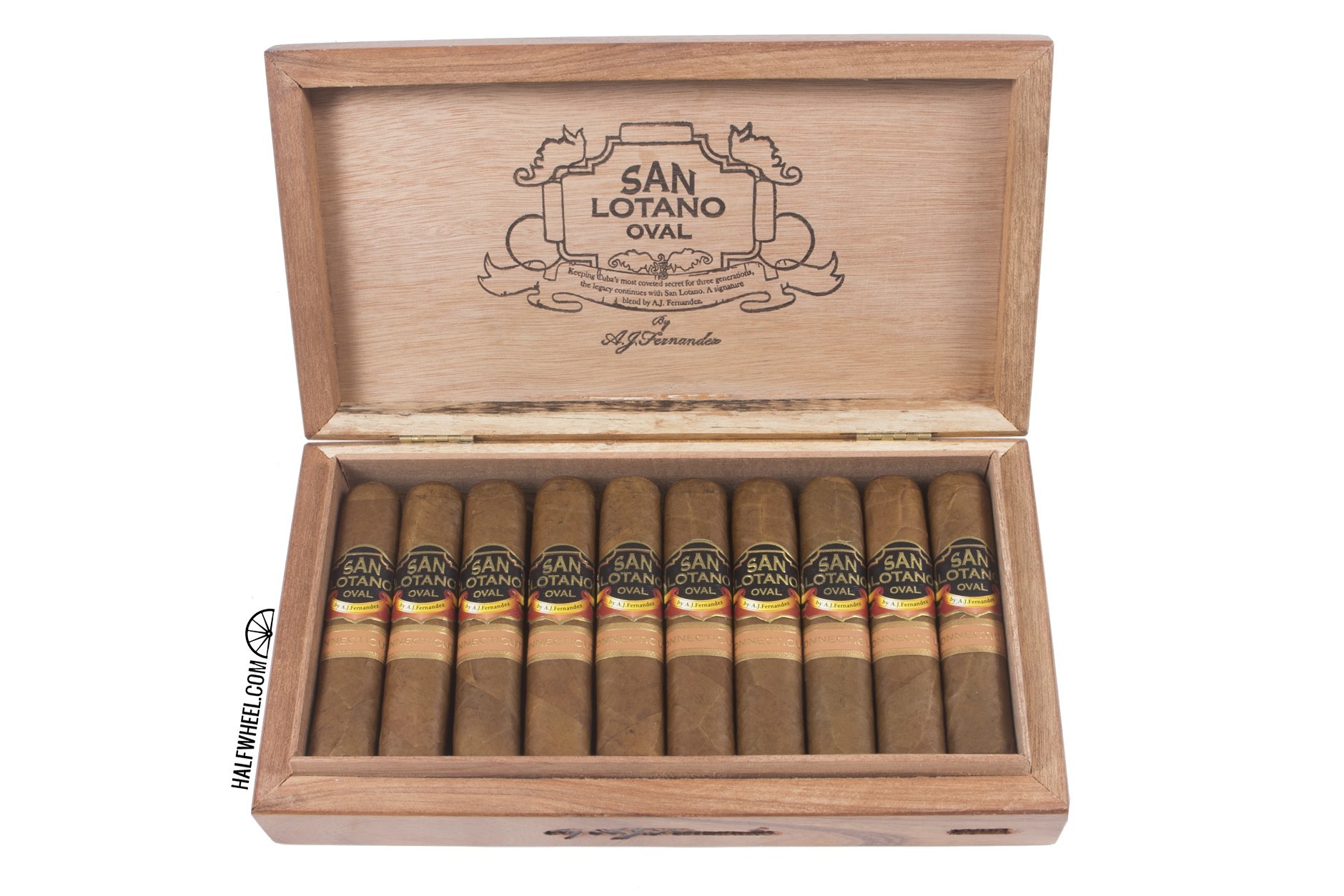 The Connecticut wrapper on the San Lotano Oval is a bit darker of a shade than what I generally think of when it comes to Connecticut wrappers, reminding me of a latté with its color and noticeably darker than the caramel or butterscotch descriptions I’ve been known to use. The wrapper is velvety and smooth with just a few subtle veins that the fingers glide over and there appears to be just a bit of crystallization on the leaf. The bands take up almost a third of the cigar, something that wouldn’t be as much of an issue on a Churchill of toro vitola, but in this compact size means I will be taking them off sooner than later, and it does something to interrupt the visual flow of the cigar. The Oval has just a bit of give to it, more so when squeezed front-to-back as opposed to side-to-side, but nothing to be concerned about. Because of its shape, a cut with my cigar scissors produces what looks like a shallow v-cut, as I generally take as little of the cap off as possible when clipping a cigar. The pre-light aroma offers graham crackers with a bit of sweetness, a thick aroma that has an almost doughy texture that pulls the nose into it, while butter and a floral note compete for attention as well. The cold draw is loose on each cigar with almost little to no resistance to the air flow and doesn’t show much in the way of flavors, save for a very subtle bit of buttery creaminess.

The first puffs of the San Lotano Oval Connecticut Short Robusto pack a good amount of pepper to them and certainly more than I was expecting from the cigar. The palate gets a bit of white pepper that creeps towards the back of the throat, while the aroma gives the nose a bit more of a black pepper feel that lingers in the nostrils for a couple of seconds, with retrohales consistently confirming that statement. Even with the looseness of the cold draw, there’s no problems once the cigar is lit as the flame seemed to tighten everything up and the cigar draws smooth and evenly. After a bit of gruffness out of the gate, the smoke smooths out incredibly well just shy of the one inch mark and the cigar picks up a bit of creaminess while leaving the pepper effect intact for the nose and palate with a touch of chalk coming in as well. The ash survives the removal of the first band and a little beyond that but drops off at the start of the second third. 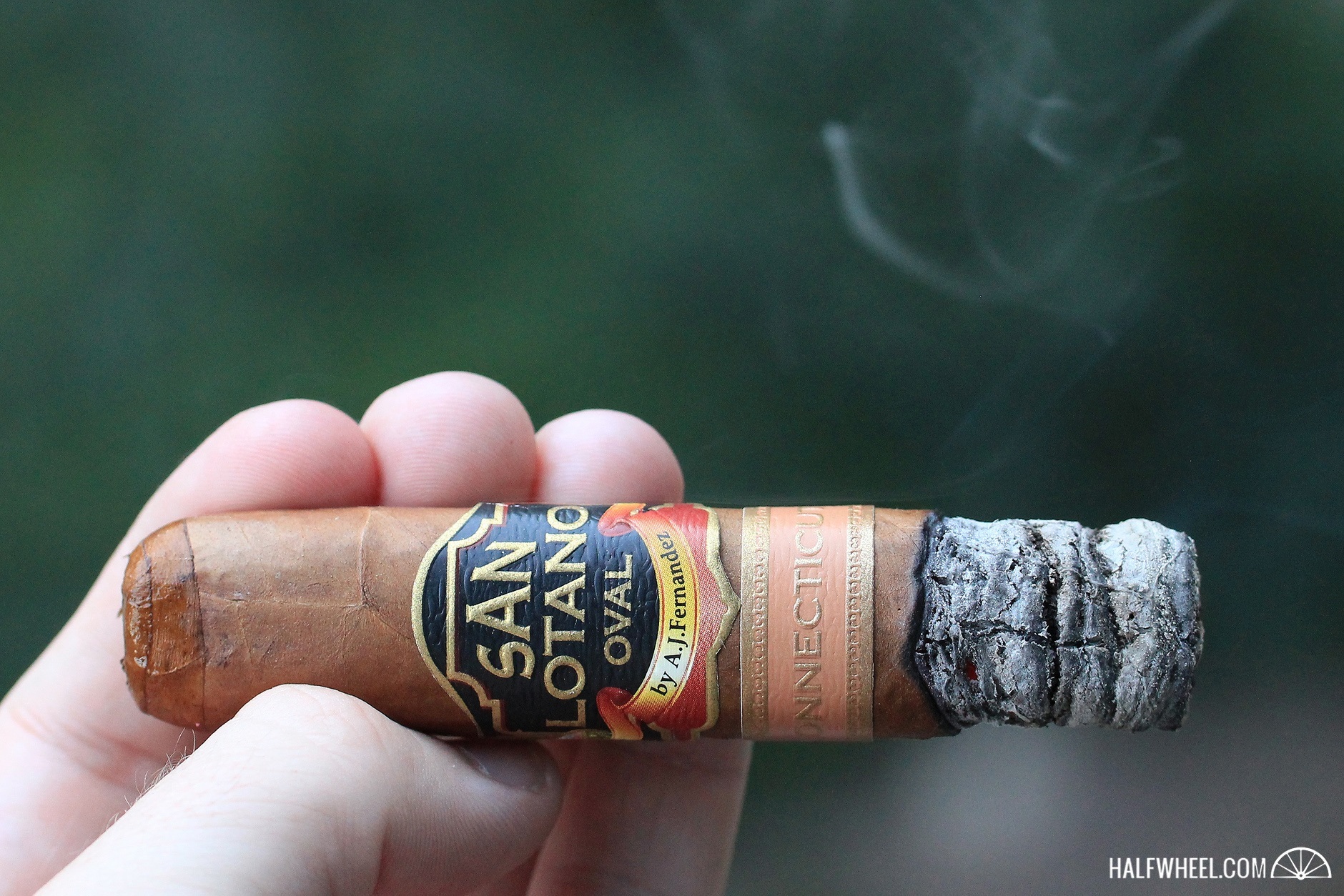 There’s just the slightest bit of char and smokiness to the Oval Connecticut which gives it a unique and enjoyable complexity and depth, as well as a bit more strength than it showed in the first third. Roasted nuts quickly enter the equation for even more depth and complexity, a series of flavors that have been introduced skillfully and almost effortlessly, transitioning from one to the next without any hiccups. The creaminess has taken a bit of a backseat at the midpoint though the smoke is still very smooth, and in some cases disappears almost completely by the midpoint, having become overpowered by the lingering charred wood note. It’s a bit of a harsh yet still enjoyable taste, somewhat rough and robust that gives the cigar a distinct edge and separates it from the majority of other Connecticut-wrapped cigars on store shelves. There hasn’t been a single issue with the cigar to this point as the burn line stays steady and even while the draw is incredibly smooth. Strength continues to creep upward in the final third of the Oval Connecticut, as the approaching burn line seems to aid that while adding a bit of heat, and the smoke now gives the eyes a bit of irritation. The burn rate has stayed steady, but given that there is just 4 1/2 inches of cigar to begin with, it approaches a bit quicker than that of a longer cigar. One thing that has gone overlooked is the mouthfeel of the smoke, which for the most part is fairly full and soft. The char becomes more of a significant factor with just about over an inch to go, a point where many might consider putting a cigar down but in this case is still more than 20 percent of the stick’s length. It’s not overpowering by any sense but isn’t the most palate-friendly note, and shows how even a Connecticut-wrapped cigar can offer flavors outside of the ‘traditional’ ones associated with it. The draw loosens up just a bit in the final inch as the cigar gets taken down to the very nub, with a bit of intense pepper on the front of the tongue providing a final flavor bang from the Oval Connecticut. The San Lotano line is one I find myself passing by too often, if for not other reason other than its sheer ubiquitousness in the humidors I tend to visit. After three of the Oval Connecticut Petit Robusto, I’m inclined to say that practice will be changing a bit. Thinking of the San Lotano Oval Connecticut blend as just another Connecticut or something too mild for your palate is short-sighted and a disservice, as I can tell you that there wasn’t a single moment where my senses weren’t fully engaged by the cigar. In some ways, it can almost be too much at times—or at least too much for you might be expecting from a such a cigar. But for those times when you want to start with a solid Ecuadorian Connecticut wrapper and amp the flavor up from there, you’d be hard-pressed to be find many cigars that offer then strength and balance of the Oval Connecticut.