Walk into an average cigar humidor and I’m sure you could find some cigar brands that would be a challenge to name the owner and manufacturer of; while many companies make sure that there brand is prominently featured on the band, there are a number of other fairly well-known brands whose roots are not as apparent.

Case in point, San Cristobal, a brand owned by Ashton Distributors, Inc. and made by the García family at the My Father Cigars, S.A. factory in Estelí, Nicaragua. In fact, it’s one of two lines—joining La Aroma de Cuba—that share this less than transparent ownership and manufacturing backstory.

The San Cristobal portfolio is made up of five distinct lines: the original core line, the Elegancia, the Quintessence, the Revelation and the Ovation. The Ovation was launched in 2015 as a limited edition project, with 3,000 boxes of 22 cigars produced, using a Mexican San Andrés oscuro wrapper over fillers grown by the García family. The San Cristobal Ovation Decadence is a good sized cylinder of a cigar with a commanding band that is bright and eye-catching. The wrapper on one sample looks is a good bit lighter above the band than it does below it, and while the other two samples are more consistent, each leaf shows a healthy amount of mottling. Veins and tooth are present but small and the roll quality is firm and incredibly clean, as are the caps, though the head of one sample is angled in a bit, almost as if it got pressed a bit during the process or transport. The foot is dry and quite mild, offering a bit of tingle from the dry tobacco and some faint bark with sproadic notes of peanut butter and grape jelly sweetness showing up in one sample. The cold draw is certainly good and feels both a touch loose and a touch firm, often in the same cigar depending on how it sits in the mouth. There is more bark, some soil and a touch of cocoa powder and pepper, but otherwise the cigar is keeping its flavors close to the vest.

Given what the San Cristobal Ovation Decadence was offering my senses prior to being lit, Im not surprised by the dry first puffs, though there is a touch more pepper than I would have anticipated. Out of the gate this is a cigar that is almost pleading for a beverage pairing of some sort; water at minimum to refresh the palate, but something with some sweetness seems like it would be ideal, or at least the character of a good Scotch if you wanted something bolder to keep up with the smoke’s initial flavor. In the first inch I get a bit of graham cracker, which compounds the dryness but also adds a bit of sweetness, while the retrohale is almost surprisingly clean and mellow despite offering a good amount of white pepper that is capable of lingering in the nose for a good bit. The flavor can take some interesting turns depending on the sample with one getting suddenly sharper and more lingering on the tongue, while also creating a quasi-puckering of the cheeks. While I don’t usually make a big deal out of the ash of a cigar, I’m impressed by how dense and white this is, showing hardly a flaw through the first inch. Meanwhile, the smoke production is good, burn line is straight if not on a quite perfect plane, and the draw is ideal. The smoke stays on the dry side heading into the second third, not showing much in the way of changes other than swapping out a bit of the pepper for some chalk. 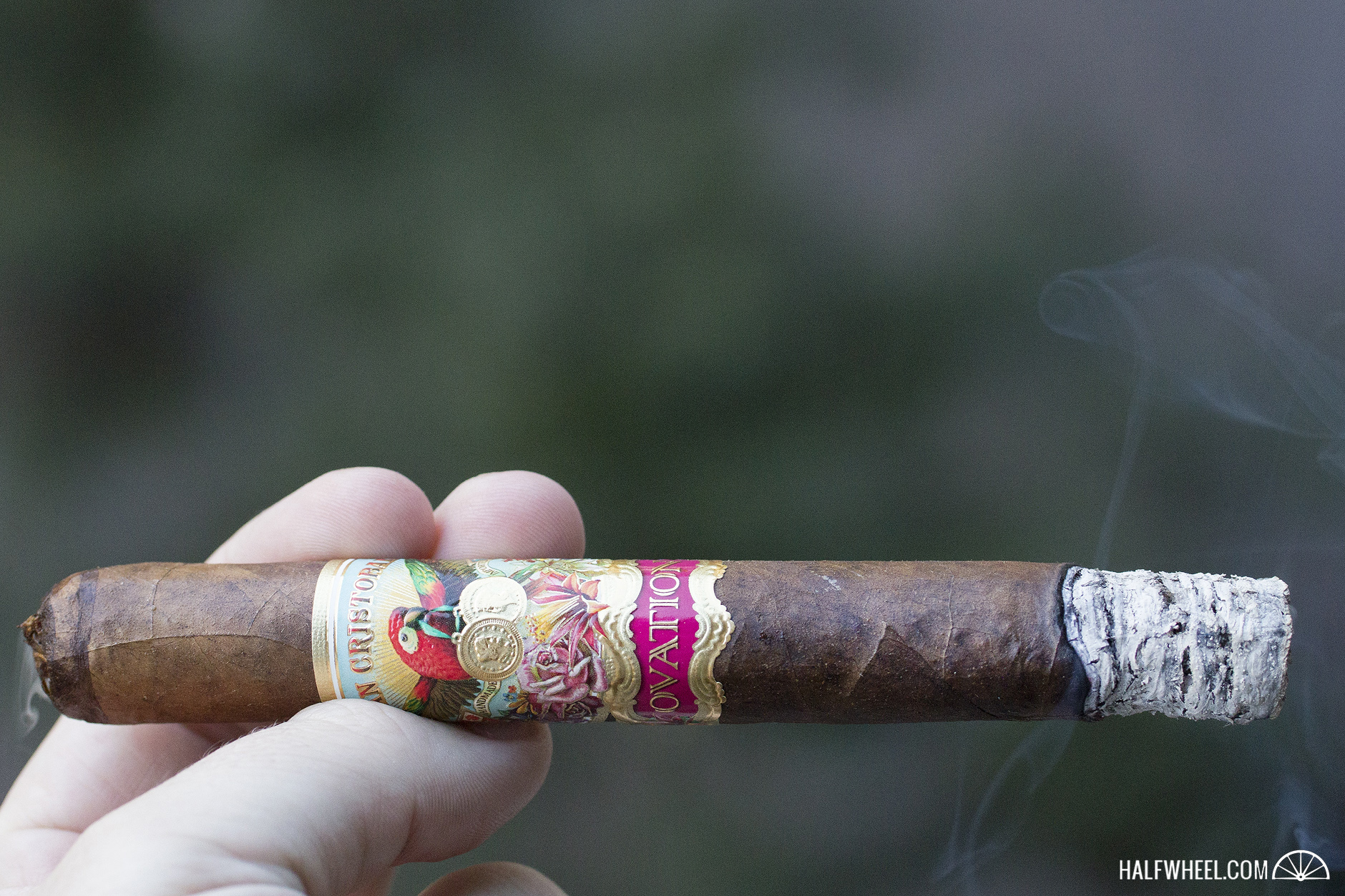 While the first third wasn’t rife with flavor changes, the second third of this San Cristobal sees a few small steps away from where the cigar started, most notably as the flavor picks up a touch of very subtle freshly cut wood notes. One sample gets a bit harsh with rough pepper, I wouldn’t go so far as to call the profile or smoke thin, but it definitely seems like it could use some additional body, which comes around at the midpoint as the flavor gets more peppery by way of some smokiness and grill notes, almost a bit charcoal in nature and steadily intensifying past the halfway mark. Retrohales are quite peppery if thin in texture, offering an interesting midpoint between black pepper and chili flakes, and I get a bit of green pepper almost anecdotally as it’s a distinct flavor but there’s a bit of familiar sensation happening. After some juicy dark berry notes deliver some sweetness, there is a bit of shift in the pepper heading into the final third, though it’s not quite clear exactly how it will come out on the other side, as it seems like it’s getting both gruffer and more earth-laden as well as spicier, a la red chili pepper. I’m also sensing a slowing of the combustion rate as the burn line begins creeping along after keeping a brisker pace in the first third, and it’s harder to get the smoke production back to earlier levels after the cigar has been at rest. 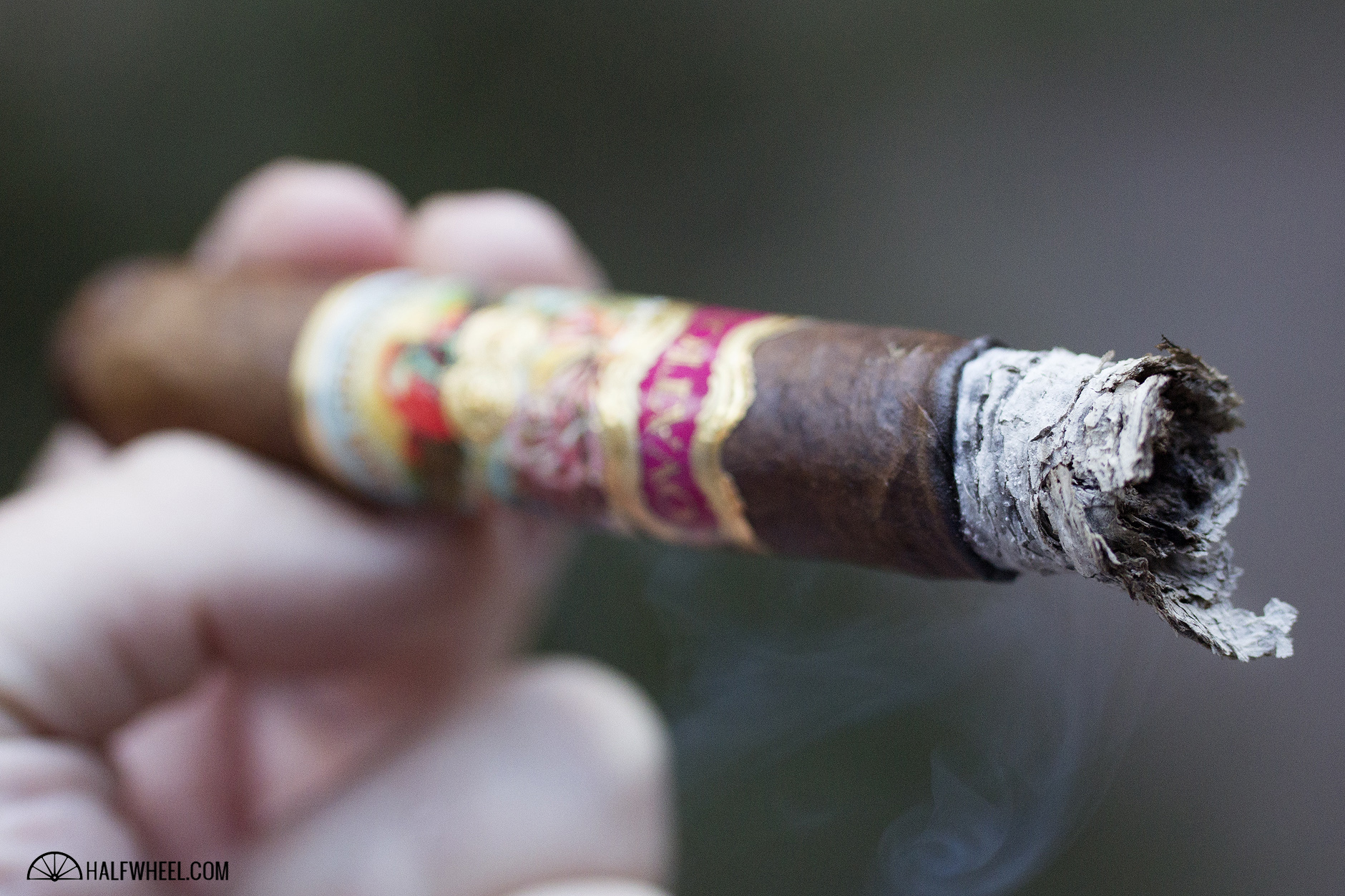 The next steps of the San Cristobal Ovation Decadence help get it to a point where I’m comfortable calling it a complex flavor profile, even if it’s not a profile I’m completely in love with. The retrohales are a touch more potent and lingering, the profile is more robust and rooted in hearty terroir, and the overall body has stepped up to medium-plus if not medium-full. Tree bark continues to linger in the profile and there are an increasing number of puffs where the smoke has a certain damp juicyness that saturates the tongue and somewhat mitigates the heartier core. While the burn remains slow and plodding, the draw is still quite good and I’ve yet to even look at my lighter for a touch-up except for an instance where I let the cigar rest for too long. As I noted above, I was a bit surprised to see that the San Cristobal Ovation Decadence uses a San Andrés wrapper as I certainly wouldn't have guessed from the flavor profile, though this different take on the leaf certainly isn't disappointing. The cigar is generally solid from start to finish save for a few rough puffs, and while I didn't find the vibrance and complexity to be the most engaging or compatible with my palate, it did a commendable job holding my attention from start to finish. I could certainly go for a bit quicker burn in the second half as the flavors didn't have me thinking about wanting to slow down and really savor them, though I also wasn't in a hurry to get through them. Overall, the 2016 version of the San Cristobal Ovation Decadence is a hearty, enjoyable cigar that merits a try when you're in the mood for a near full bodied smoke with solid flavors and a good interplay between pepper, rich sweetness and robust core notes.