In development for over four years, Samsara Cigars—which translates to circle of life—is the brainchild of owner Narinder Kumar, who also owns the NK Cigar Lounge in Westlake Village, Calif.

The Nicaraguan puro is produced at Gran Habano’s GR Tabacaleras Unidas in Honduras. There will be three sizes at launch, all of which are box-pressed and come in 20-count boxes.

Samsara brand owner Narinder Kumar had this to say about his origins:

I got into this business 8 years ago. I am from India and moved to USA in 1999. Since I started my cigar lounge, it was my dream to have my own line of cigars. This dream came true 4 years ago when I met George Rico from Gran Habano. We worked on few blends and came up with this blend. Its a Puro Nicaraguan with Nicaraguan Corojo Wrapper. My line of cigars is called Samsara. Its an Indian word and it means Circle Of Life. I have tested this cigar for 4 years and I am really happy with the results.  Its being manufactured in their factory in Honduras.

While there will only be three different sizes sold in the Samsara line to start, Kumar is planing on adding a forth vitola, a box-pressed torpedo —to the brand in January of 2015. There are also quite a few other vitolas in various stages of being tested in the blend, including a lancero and 6 x 60.

There will be three different vitolas in the Samsara line at launch. They are: Covered in a dark chocolate brown wrapper that is silky smooth to the touch, the Samsara has an obvious box-press that falls just short of being extreme. The cigar seems very hard when squeezed, almost to the point of being overfilled, but there is a tiny amount of give. The wrapper is totally devoid of any oil whatsoever, and smells like a combination of strong leather, earth, grass and barnyard.

Starting out, the Samsara leads with flavors of creamy leather mixed with barnyard, hay, bitter espresso and earth, along with a healthy amount of cedar on the palate. There is a slight white pepper on the retrohale, but no spice at all at this point. The profile is gritty and dense, with almost no sweetness at all to be found either in the mouth or in the nose. The draw is excellent, with just the right amount of resistance, while the burn is spot on for the entire first third. The ash is extremely compact and almost totally seamless to look at. Strength-wise, the Samsara barely hits the medium mark by the end of the first third, and does not seem to going anywhere fast. 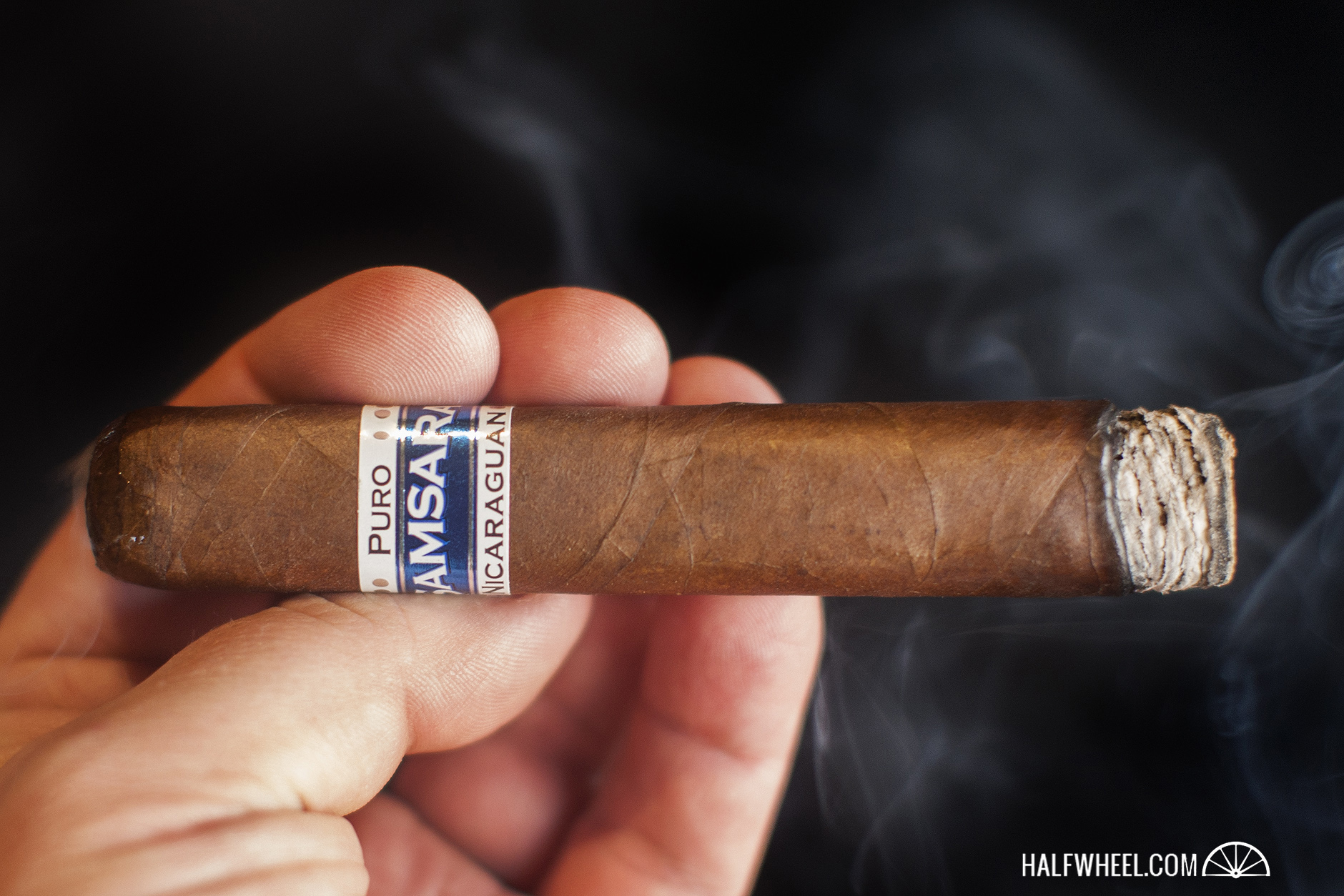 There is a small uptick in the sweetness in the profile in the second third of the Samsara, but not enough to really pinpoint with any accuracy, and the rest of the flavors seem to be much the same as the first third. Leather still dominates, although there is noticeably more espresso and noticeably less hay, especially as the second third draws to a close. The amount of white pepper on the retrohale increases slightly, but there is still no spice anywhere to be had. Both the burn and the draw remain wonderful, with the burn being a major standout, and the smoke production is just slightly above average. The overall strength increases very little, and is still solidly in the medium range by the end of the second third. The final third of the Samsara Robusto includes more of the same flavors profile wise: earth, leather, espresso, hay and dark chocolate. The sweetness has increased just enough for me to place it as a dark fruitish note that reminds me of fig, but the note is still fleeting, and never impacts the profile in any major way. Sadly, the white pepper on the retrohale has all but disappeared, leaving me with mostly leather flavors on the retrohale, mixed with a little cedar and hay. The one major standout as the cigar ends is the construction, which is still excellent on all counts, while the strength ends almost exactly where it was at the end of the second third, a solid medium. As a blend, the Samsara is quite smokable as well as extremely consistent, but the problem is that the profile is neither all that complex, nor is there any one flavor that stands above the rest for the majority of the smoke. Having said that, both the burn and draw were excellent on all three samples I smoked, and the smoke production was nicely above average as well. A well made, easy to enjoy cigar, but there are definitely better examples of Nicaraguan puros on the market, and a lot of them cost less as well.