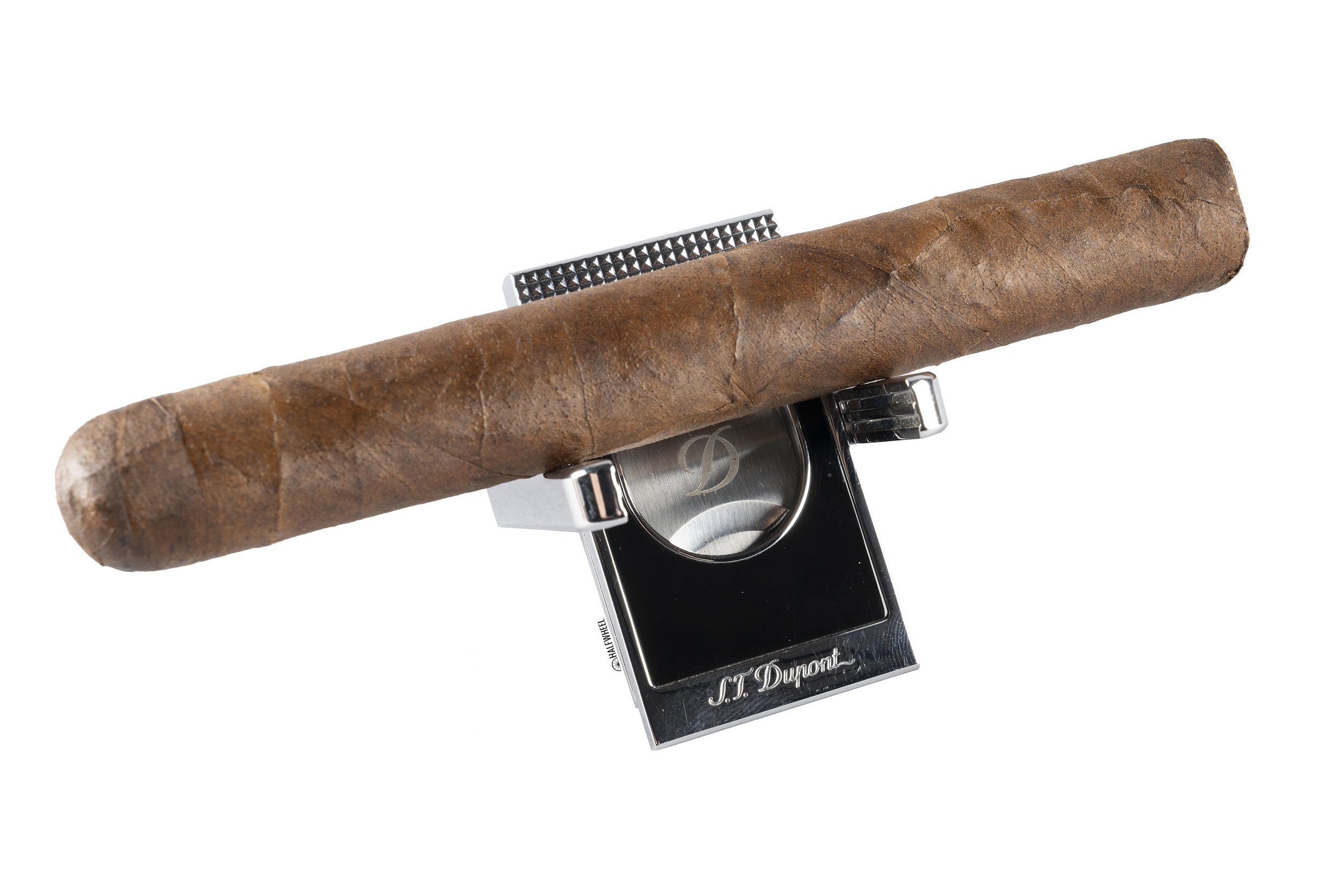 At the 2019 IPCPR Convention & Trade Show, S.T.Dupont showed off a number of different new creations, including a collection commemorating the 50th anniversary of man landing on the moon, a collection centered around the Greek titan Atlas and new versions of the company’s Complication lighter, which incorporates both a soft flair and a touch mechanism in the same product.

However, one of the most affordable new products S.T.Dupont introduced that year was the Cigar Stand Cutter, which—as the name implies—is a double guillotine cutter that can also fold into a cigar stand. 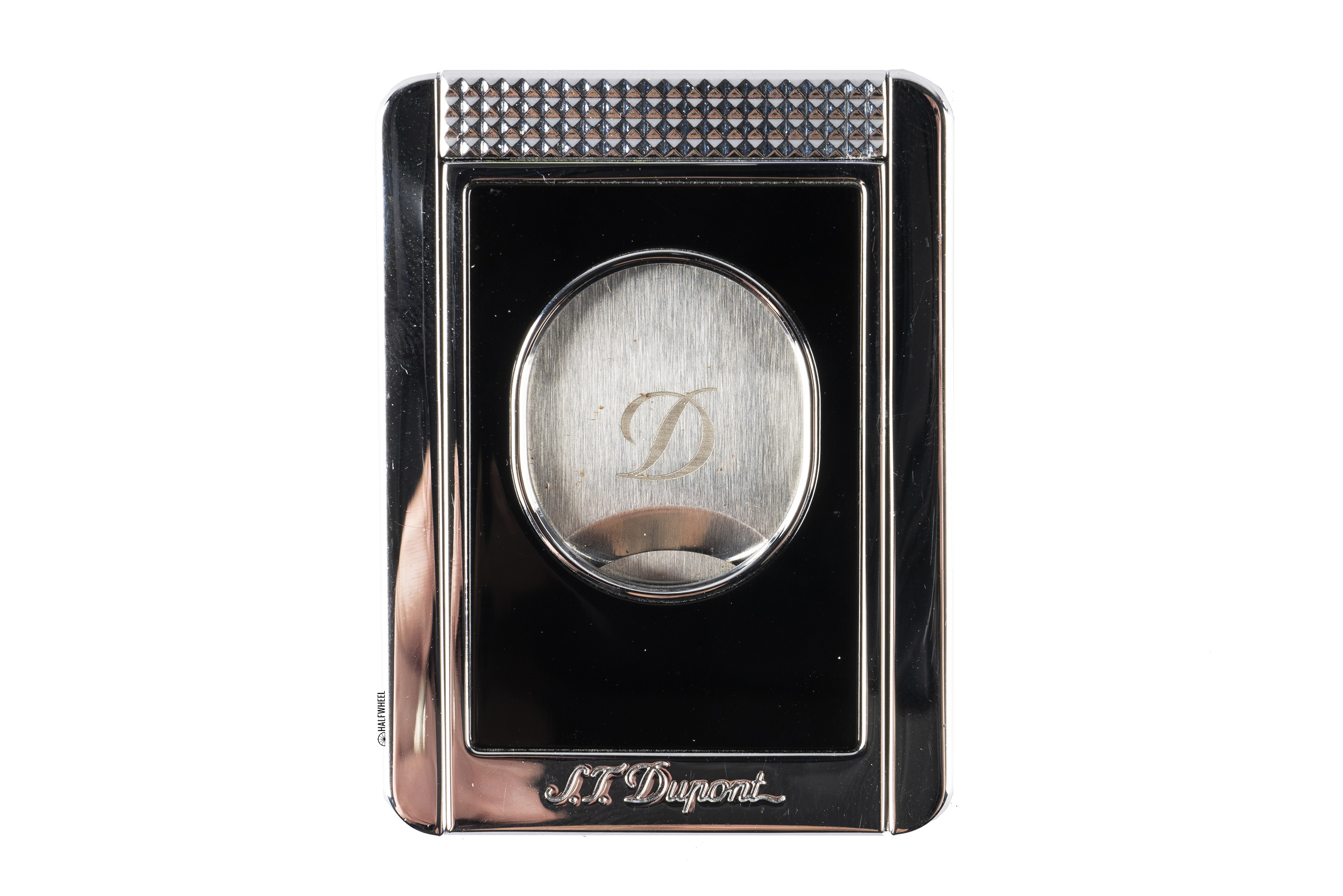 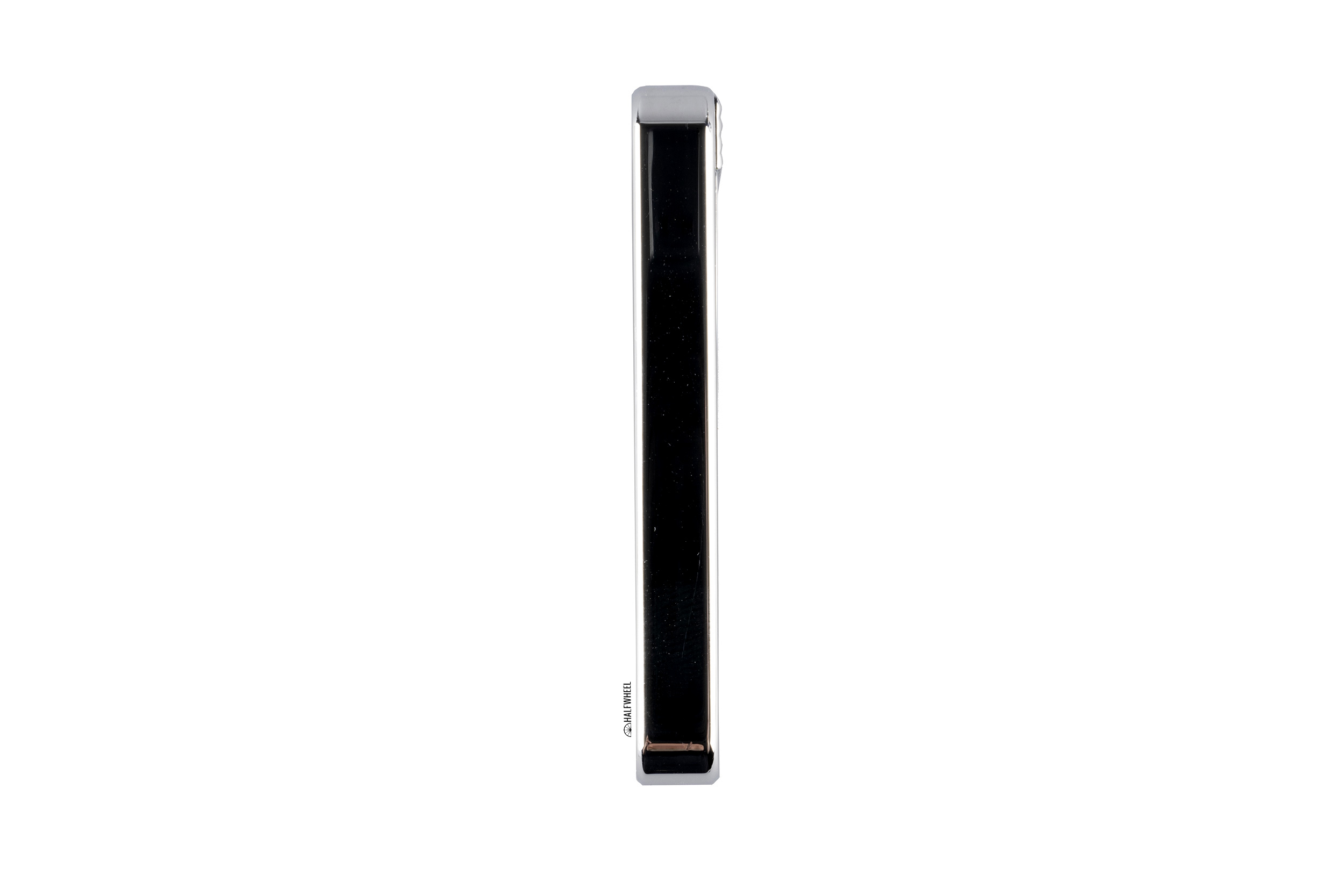 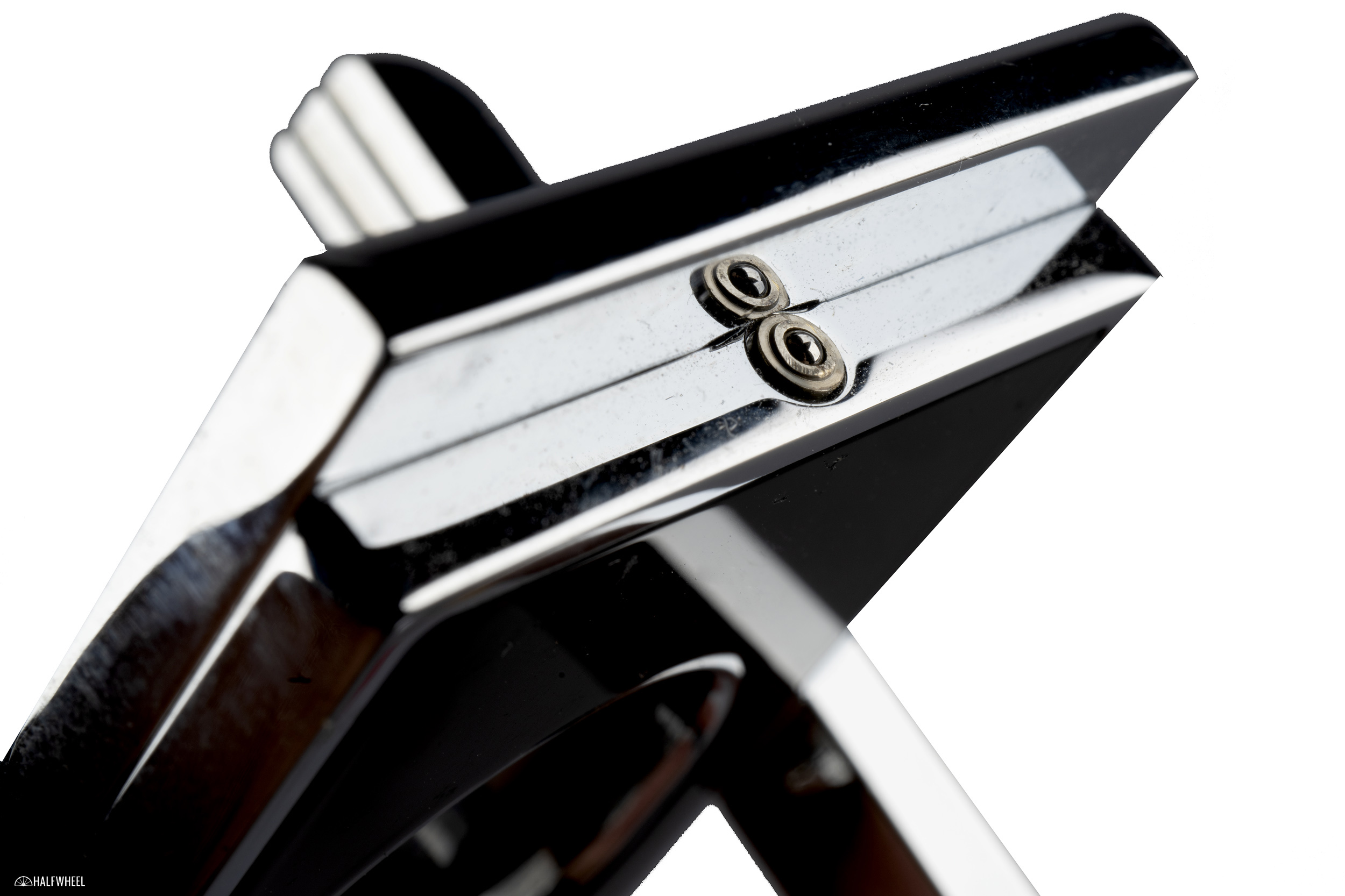 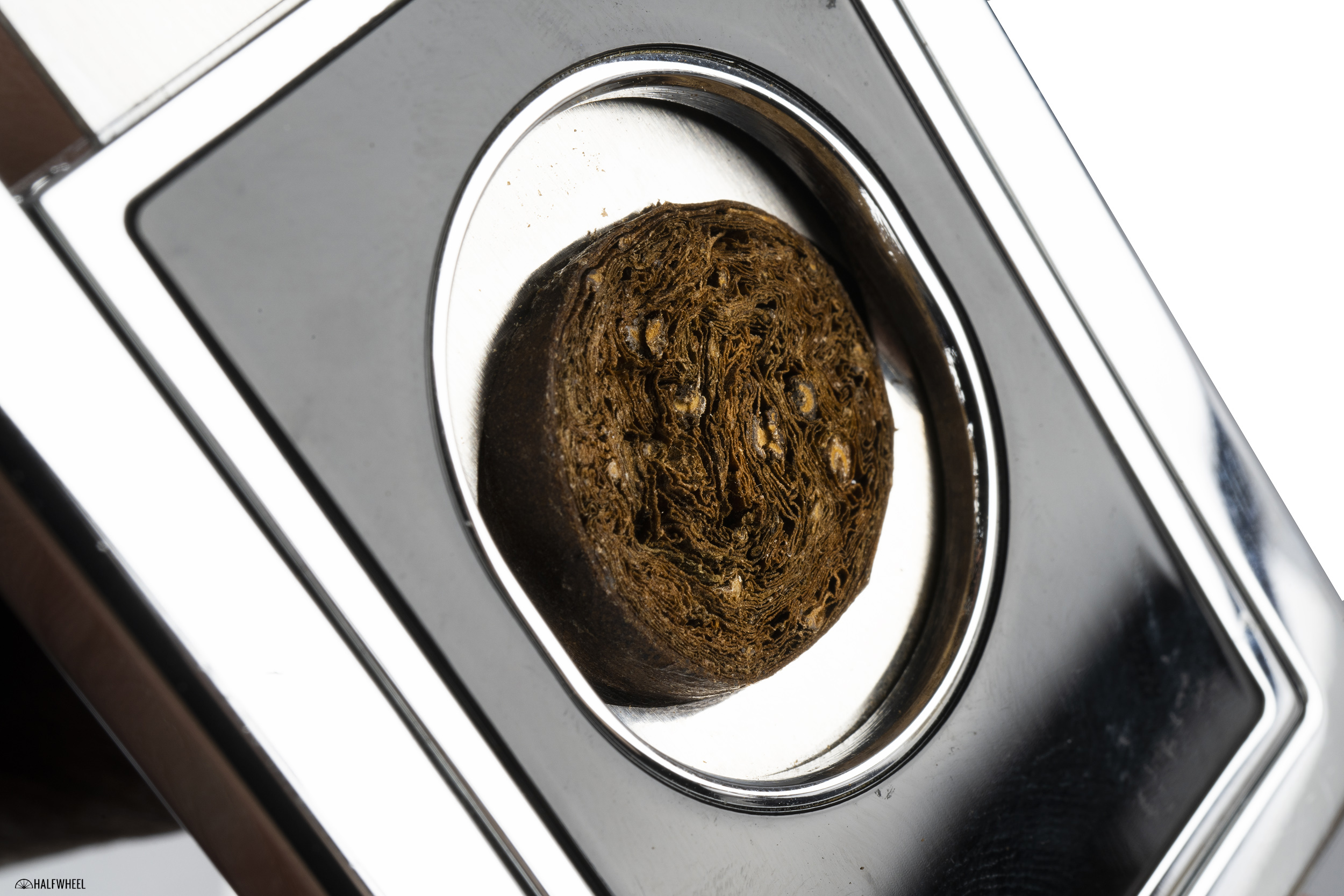 While the exterior of this double guillotine cutter is made of stainless steel, the accents feature a black lacquer finish and the blade grip is covered in a diamond head pattern. There is only one version so far—Chrome and Black—and physically, the cutter measures 2.55 inches long—increasing to 2.95 inches when open—as well as 1.96 inches wide and .4 inches thick while weighing a total of 3.84 ounces.

In addition, although I could not find a spec sheet on the cutter, after doing a bit of testing I determined that the double guillotine cutter can cut the cap off of anything up to about a 58 ring gauge cigar with ease and is able to cut a 52 ring gauge cigar completely in half if needed.

When you see it—and even when you pick it up—for the first time, the Cigar Stand Cutter looks and feels like any number of other double guillotine cutters which happen to lack finger holes and that incorporate a single moving blade. In terms of actual use, it is similar as well: basically, you pull up on the top section of the cutter, which in turn pulls up one of the blades—only the top blade moves, the bottle blade is stationary—and reveals the opening. Then, you place the cap of the cigar you are cutting into the opening and push down firmly, which causes the blade to cut through the cap and stop at the end of its journey, where it stays firmly shut.

However, much like the Transformers toys I played with when I was growing up, there is more to this cutter than meets the eye: by pushing the edge of the cutter and the main section of the cutter—i.e. the blade—in opposite directions, the middle section splits apart, forming a heavy-duty cigar stand. Due to the overall weight of the cutter, the stand is quite stable and there was never a point where it closed up on me or fell over, even when I accidentally brushed it a few times.

For a period of a bit more than five weeks, I used the S.T.Dupont Cigar Stand Cutter to cut much every cigar I smoked, which gave me plenty of time to determine the number of facts, the most important being that it has virtually no problems executing clean cuts of pretty much any vitola up to 58 ring gauge, regardless of the wrapper the cigars were covered in, or pretty much any other external factors.

Of course, the above statement does not mean there were no issues. The largest problem I had is that when I pull the blade up to cut a cigar, I had to physically hold it in place or it has a tendency to slide back down on its own a little. In addition to being a safety concern, this fact makes the physical act of cutting more problematic than it should be, since you need to find a way to stop the blade from moving while simultaneously putting the cap of the cigar into the opening.

After a bit of testing, I came up with a solution: when the blade is open all the way, I put my index finger and ring finger in the grooves that are present on either side of the blade, thus forming a barrier that stops the blade from moving downward. When the cap of the cigar is in the opening, I then slowly push down the blade while simultaneously removing my fingers from the openings until the blade reaches the top of the cap, then remove my fingers entirely and push the blade the rest of the way through the cigar. While there are plenty of choices when it comes to cigar cutters that also have a built-in cigar rest of sorts, I could only find one other cutter that physically transforms into a cigar stand, the Mrs. Brog Cigar Cutter and Cigar Stand Combo. However, while the $5.99 price tag of the Mrs. Brog product is obviously miles below what you would have to pay for the S.T.Dupont, the actual process of transforming the former cutter into a cigar stand involves actually splitting the cutter apart and putting it back together, which takes not only quite a bit of time but is not exactly intuitive. In addition, there is also the fact that the Mrs.Brog is a scissor cutter instead of a double guillotine cutter. Have you ever wanted a pet Transformer that lives in your pocket? Well, this is sort of like that, only this Transformer cuts cigars before shifting roles to hold your stick of choice. As I have said many times in the past, when it comes to cigar cutters, combining two or more functions into one creation usually results in a product that comprises too much with negative effects. But the S.T. Dupont Cigar Stand Cutter sidesteps any potential issues with style, grace and relative ease. In fact, it performs both of its main duties equally well: as a cutter that I could depend on to give me clean, even cuts time after time; and as a cigar stand that holds the cigar safely with virtually no chance of falling or shifting position. Yes, the cutter carries an expensive price tag and is somewhat limited in the size of cigars it can cut, but in the end, this is a rare case of getting exactly what you are promised.