In 2016, an interesting package showed up at the halfwheel office, as inside it were cigars called Rauchvergnügen.

For better and worse, we frequently get cigars sent to us from brands I’ve never heard of, but what made Rauchvergnügen—which I’m just going to shorten to RVGN from here on out—different is that they were packaged in a way that reminded me more of German tool brands versus cigars.

Sure, the German name helped, but the approach looked decidedly different than most cigars. As Patrick Lagreid explained when he reviewed the debut #42 size three years ago, RVGN was founded by a trio of engineers, Joachim aka Joe, Klaas and Oliver. The concept is to make cigars with the German engineering that is well-known in other industries.

There are now five sizes, each carrying a name that refers to the cubic centimeters of volume of each cigar. Given the large size, I’m not surprised to see veins in the wrapper, but overall the leaf looks fine. There’s a fair amount of oils, uniform color and no patch jobs. Aroma is medium-plus with some acidity, leather and a dry, not-so-sweet chocolate flavor that reminds me of smelling a bag of Nestlé Tollhouse chocolate. Aroma from the foot has a bit of that cocoa flavor, some fruitiness, artificial vanilla and a touch of floral flavor. While that might sound overly sweet, they are all sitting behind a generic tobacco flavor and it’s far from clawing. Cold draws show peanut butter, vanilla creaminess and some earthiness, right at the medium level. It also exposes the first sign of how awkward cigars like this can be to smoke as trying to dangle the gran corona vitola from my mouth is a decidedly different experience than every other cigar I’ve smoked this year.

The RVGN #64 starts with a lot of earthiness, an underlying sweetness and some nuttiness. While there aren’t any flaws with this, it’s also one of the more generic flavor profiles of a cigar. Forty-five minutes in and there’s an interesting mixture of creaminess and cracker, both a bit stronger than the earth. Flavor is nearly-full, body is medium-full and strength is medium-plus. The cracker flavors fade as the first third—which mind you is about the size of a petit robusto—goes on, but that is really the only change in what flavors present. Retrohales can show a bit of a corn-heavy bourbon flavor, but then the earthiness and creaminess gobble up that sensation. The ash holds on for over an inch with ease and the burn is even around the cylinder, but all three cigars tunnel at various points of the first third. 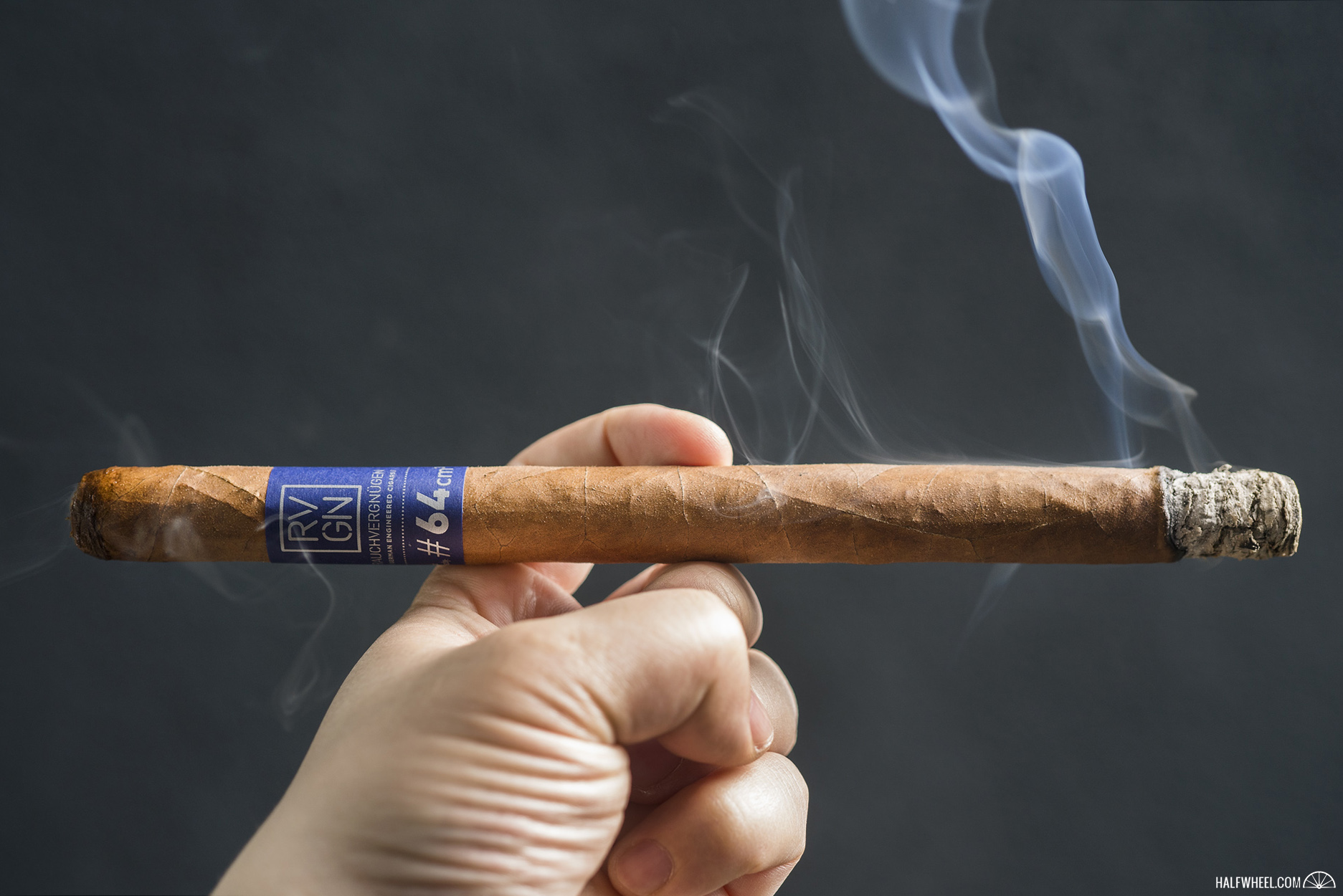 An hour and 45 minutes in and I’ve realized that the profile has changed somewhat. There’s still a fair bit of earthiness, but there’s now lemon and French bread behind it. Retrohales are decidedly different with a mixture of raspberry tea and bread, the latter of which dries my palate. The finish has some bread and lemons, but once again the RVGN’s earthy and creamy characteristics are really what sticks around in both my palate and mind. Another hour passes and the fruity flavors have departed, leaving the earth and creamy mixture to dominate some nutmeg.Flavor is full and increasingly drier, body is medium-full and strength is medium-plus. Touch-ups are needed throughout the RVGN, which still has issues with small scale tunneling. In addition, the smoke production is decidedly less thick than it was in the first third. With four and a half hours gone, I look down and see the remnants of a cigar that looks like a typical final third. I also am beginning to notice that the nicotine, while never overly aggressive, has taken its overall effect on me and I’m beginning to feel it. The earthiness is even more prevalent than before, now taking on a familiar flavor that happens when a cigar needs to be lit constantly. Retrohales have a great sweet and salty mixture, but it’s not enough to cut free from the hours of earthiness that has coated my palate. AT times, that flavor can be a bit more herbal, which isn’t pleasant. Flavor is full, body is full and strength is medium-plus. I'm a fan of the gran corona vitola, more popularly known as the A size, and will generally try it out whenever I see it. Those experiences go one of two ways. In the best scenarios, cigars like the Illusione ~1~ provide a completely different progression of flavors than what could be had if I just smoked two robustos. All the other scenarios are like this: not enough change. It's particularly punishing when I'm doing a review where I'm not pairing the cigar with anything or refreshing my mouth with water, but there's no getting around the idea that the RVGN #64 doesn't offer much in the way of changes. As such, I'd stick with the more common sizes for now.